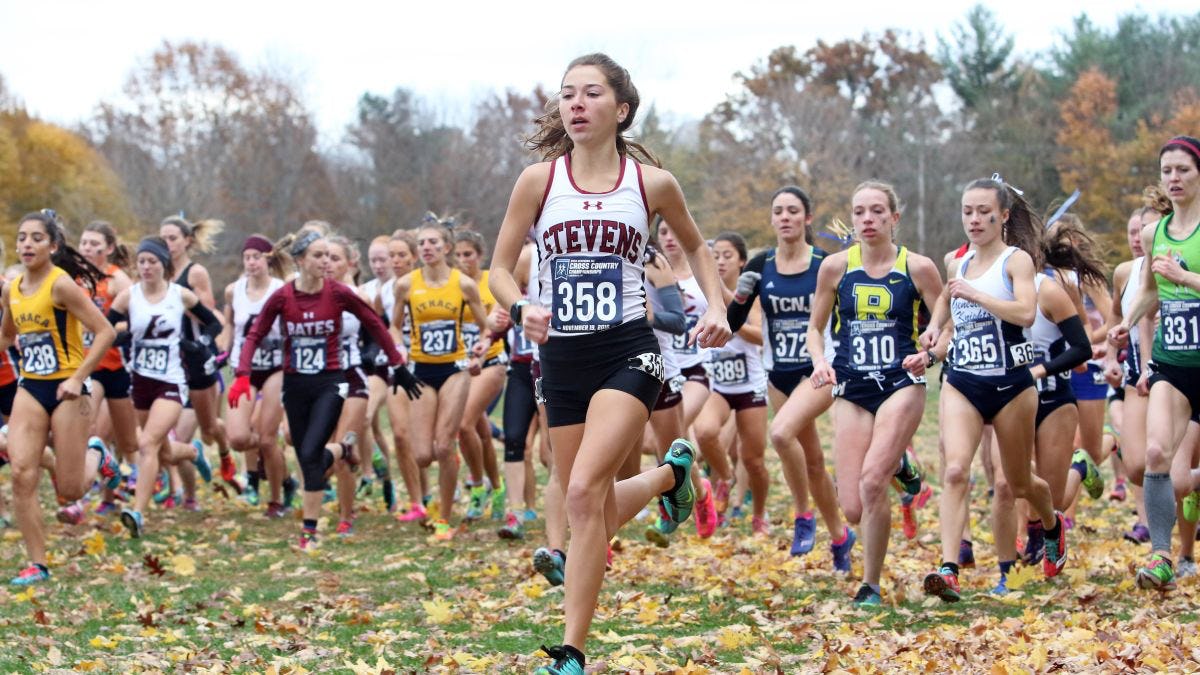 Recent Stevens Institute of Technology graduate Amy Regan '17 was announced as a 2018 recipient of the prestigious Today's Top 10 award from the NCAA on Thursday. The award recognizes former student-athletes for their successes on the field, in the classroom and in the community. (View the NCAA video on Amy Regan.)

Regan, a six-time NCAA individual national champion in cross country and track and field, is a two-time USTFCCCA Cross Country National Athlete of the Year (2014 and 2016) and earned USTFCCCA National Athlete of the Year honors in indoor and outdoor track in 2016. She became the first Stevens runner ever to reach the NCAA Division III cross country championships, doing so her freshman year in 2012.

"I know I speak for many people from the Stevens campus community in saying how proud we are of Amy," said Director of Athletics Russell Rogers. "Individuals like her simply do not come around very often and I am honored that I got to see Amy's magnificent career unfold. As impressive as her academic and athletic honors and accomplishments are, what truly separates her is the kind of person she is. Friendly, loyal, honest, caring and selfless are just a few of the words I can think of to describe Amy. She is very special, and I cannot think of a more deserving person for the NCAA Top 10 Award."

A 14-time U.S. Track and Field and Cross Country Coaches Association of America All-American, Regan also is a four-time Empire 8 Conference cross country champion and Runner of the Year, and she was named the conference Indoor Track Athlete of the Year three times and Outdoor Track Athlete of the Year once. Regan holds school records in numerous female distance events in cross country and indoor and outdoor track and field.

She is a two-time female USTFCCCA Scholar-Athlete of the Year (2015 and 2016), and she received two College Sports Information Directors of America Academic All-America honors. She earned her undergraduate degree in engineering management, and she received the 2017 Frederick Winslow Taylor Award, which is presented to the most influential thinker in modern management theory and application at Stevens Institute of Technology.

Regan also donated time to Special Olympics and volunteered several times with the Student-Athlete Advisory Committee's PB&J for the homeless program. In 2017, she volunteered with Girls on the Run as a coach, and she also served as the student member officer for the Engineering Management Honor Society on campus, for which she reviewed and nominated engineering management students to the honor society.

"The coaching staff, alumni and current athletes are so proud to call Amy one of our own," said Head Cross Country and Track & Field Coach Justin Wood. "She led the way in transforming Stevens XC/TF into a national-caliber program and she proved that anyone can achieve anything they dream of if they work hard. I think that this award represents a culmination of all of Amy's successes at Stevens. The summary in the article only touches on the effect that she had here and it goes beyond personal bests, trophies and school records. Her work ethic was inspirational and her achievements aligned with that."

The NCAA Honors Committee, which selects the honorees, is composed of representatives from member schools and conferences, as well as nationally distinguished former college athletes.

Before 2013, the award recognized eight student-athletes and was known as Today's Top VIII. The NCAA Honors Committee expanded the award to include 10 honorees to recognize the growing number of college athletes, sports and championship opportunities.

Regan joins men's soccer player Zach Carr '11 as the only other Stevens student-athlete to ever win the award.

Recipients of the Top Ten Awards completed their athletics eligibility during the 2016-17 academic year and will be recognized at the Honors Celebration on January 17, 2018 during the Convention in Indianapolis.