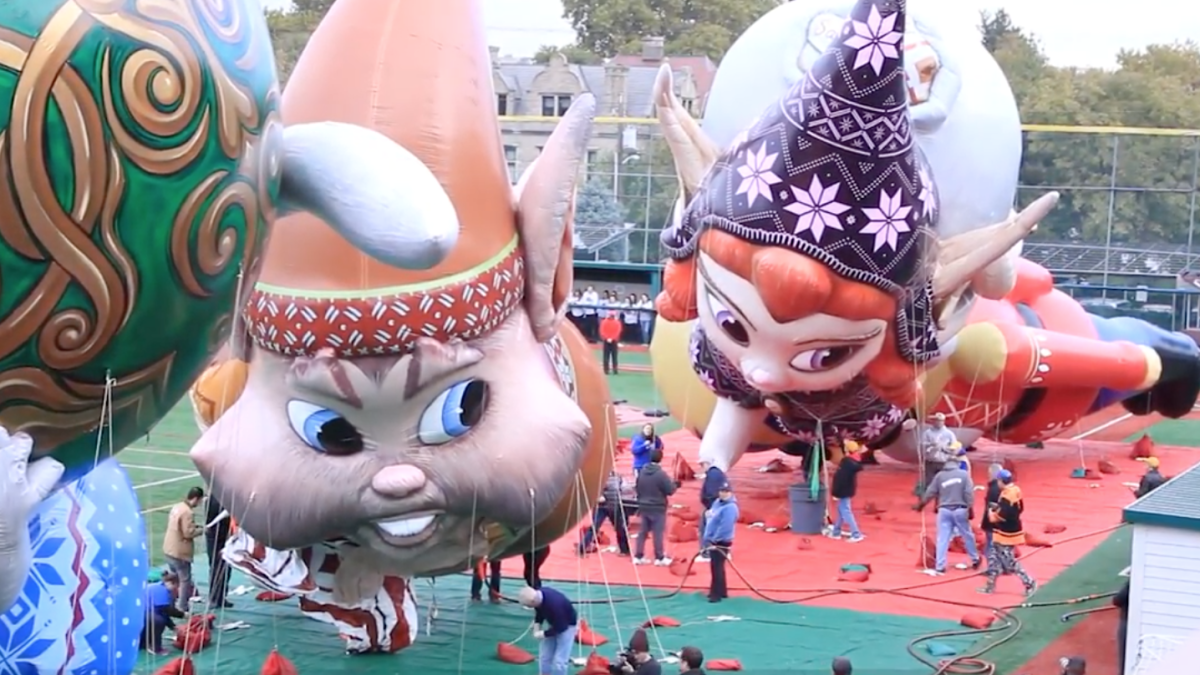 More than 100 Stevens volunteers take on a variety of roles, from balloon inflation to piloting to vehicle management.

(Hoboken, N.J. - Nov. 15, 2018) -- Millions of people gather along the streets of New York City on Thanksgiving Day to take in the sites and excitement of the Macy’s Thanksgiving Day Parade. What many may not realize is the months of preparation that goes into training the parade volunteers for their mission, many of them coming from Stevens Institute of Technology.

“We have fun out here,” said Linda Vollkommer, longtime fencing coach at Stevens who has organized Stevens volunteer support for the past 32 years. “Several alumni and faculty have been involved for one or two decades, and students love being part of the event, and come back to participate once they graduate.”

Early Wednesday morning Oct. 31, the Stevens community helped unload the balloons and assisted with the trial inflation as the characters Fleck, Bjorn and JoJo, stars of the upcoming Netflix film, “The Christmas Chronicles” took shape before being paraded around the DeBaun Athletic Complex. The crew also helped bring the legendary Nutcracker, who will make his debut in this year’s parade, to life.

This year marks the 33rd year of Stevens sending students, alumni and staff to participate in the parade, with more than 100 volunteers taking on a variety of roles, from balloon inflation to piloting to vehicle management.

The early hour didn’t stop students from having a good time on the sunny, slightly windy Halloween morning in Hoboken, N.J, where more than 30 Macy’s volunteers and staff, as well as dozens of Stevens students, alumni and staff assisted with the trial inflation of the balloons that will take flight in the 92nd Annual Macy’s Thanksgiving Day Parade, this year on Nov. 22.

“Today was a great day and participating in the parade itself is such a great experience,” said Abigal Kaye, a Stevens student participating in the event for the third year. “All of the students who came out today were excited to work with the Macy’s crew and Stevens community – and to see the balloons.”

The 92nd Annual Macy’s Thanksgiving Day Parade begins at 9 a.m. on 77th Street and Central Park West and will wind through the streets of Manhattan until it reaches its final stop on 7th Avenue in front of Macy’s Herald Square. NBC will broadcast the event starting at 9 a.m. (all time zones).

“The trial with several new balloons at the Stevens campus went really well but I’m most looking forward to the actual inflation the day before the parade,” said Kalee Burns, a junior at Stevens and two-time volunteer. “We spend the night in the Museum of Natural History and it’s a really memorable experience.”