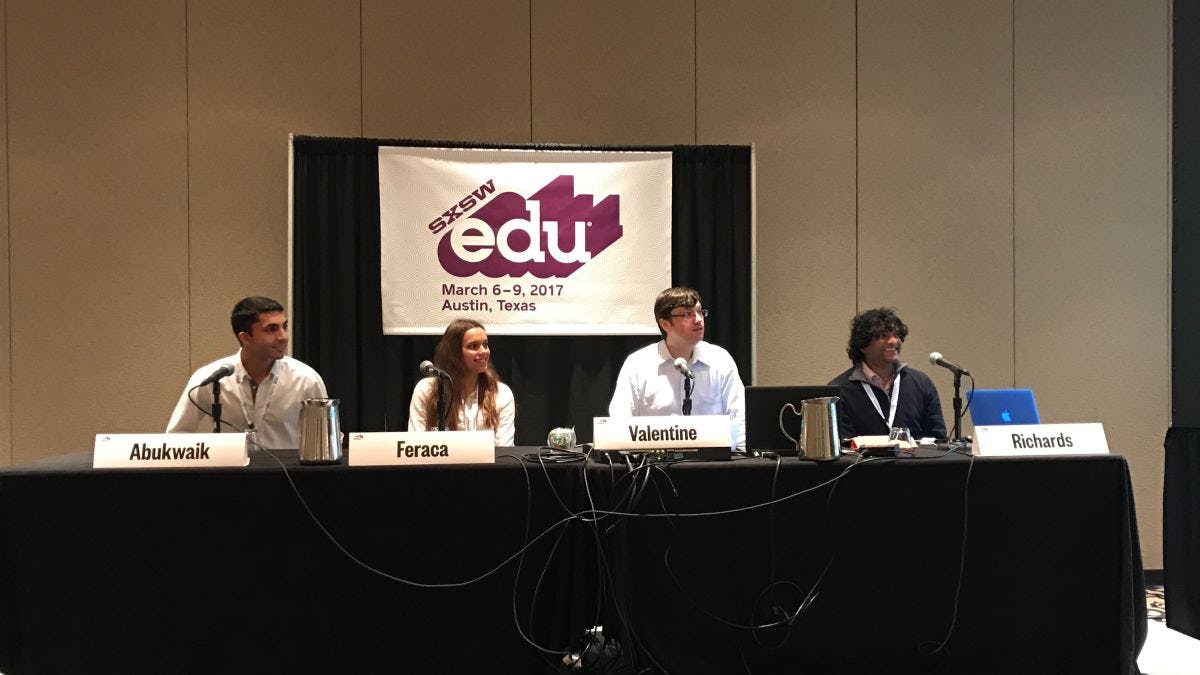 Stevens Institute of Technology sophomore and entrepreneur Ibrahim ("Abe") Abukwaik served as a panel participant at this year’s South by Southwest (SXSW) Edu, a national conference that fosters innovation and brings together diverse stakeholders in the education field, to discuss entrepreneurship in K-12 schooling.

For Manhattan-born Abukwaik, becoming an entrepreneur was never a foregone conclusion. The Totowa, New Jersey resident made the decision to come to Stevens after a year of playing professional soccer in Argentina.

“I grew up with soccer and always wanted to go professional. But once I got there, I burned out. I was on a strict diet plan and training six hours a day, and if I wasn’t playing soccer, I was watching it at home. It went from a serious hobby to a job.”

In planning for a future that didn’t involve professional sports, Abukwaik prepared for the SAT’s while playing, targeting New York City area schools, including NYU and Columbia (his mother’s alma mater), for his college education.

“It’s the best city in the world, especially for a business student. There are just so many resources and opportunities in the city and in the surrounding area.”

In the end, Stevens won out over the other schools for one simple reason.

“I came to Stevens because of the entrepreneurial programs. A lot of the teachers here on campus have entrepreneurial experience, and I knew that Stevens would give me the flexibility and resources I needed to excel in whatever venture I decided to pursue.”

Abukwaik’s decision to study business and technology at the School of Business stemmed from entrepreneurial yearnings cultivated at a four-week startup program at his high school during his senior year. It was then that he first came up with the idea of providing college prospects with personalized, one-on-one campus experiences.

The idea was inspired by Abukwaik’s own experiences visiting colleges, both as a coveted soccer recruit and as a non-athlete prospect. The experience from one to the other, he says, was like night and day.

“As a player, my experience was unique compared to what a typical prospect would get on a campus visit. When I visited the schools, coaches would greet me at the front entrance and act as a personal tour guide, take me to lunch, and introduce me to members of the soccer team, who would then show me around town,” he recalled. “But when I decided I didn’t want to play anymore and did the same college tour experience as a regular student, that’s when I realized the difference.”

That realization led to the creation of BluTours, a student-run startup that matched prospective students with guided tours tailored to their interests.

“A lot of the responses we received from the people who went on a BluTour were that they just learned so much more about what they were interested in.”

Initially, Abukwaik and his two partners relied on their own personal network to identify the campus guides.

“When we found someone we really trusted, we would give them the guidelines to scale the guide side of the business on each campus, and the business grew from there,” explained Abukwaik.

BluTours had expanded their service to more than 100 colleges and universities nationwide when it was sold last August to Campus Sherpa, a leader in the campus tour industry.

After the sale of BluTours, Abukwaik accepted an offer to work with his mentor Reshan Richards, cofounder of Explain Everything, a leading provider of interactive design and whiteboard applications in education. Richards was also Abukwaik’s co-panelist at the SXSWedu conference, by far the biggest stage Abukwaik experienced as a public speaker. His message to budding entrepreneurs:

“You don’t have to wait until you’re 25, or have an ‘x’ amount of experience to start something. If you’re interested in something, and are genuinely passionate about it, go out and do it.”

So while he looks to identify his next great startup, Abukwaik says Stevens offers the perfect environment for doing exactly what he preaches.

“There is a culture of entrepreneurialism at Stevens that encourages collaboration and the exchange of ideas. We’re able to pick each other’s brains to come up with solutions and think creatively, and that’s invaluable.”