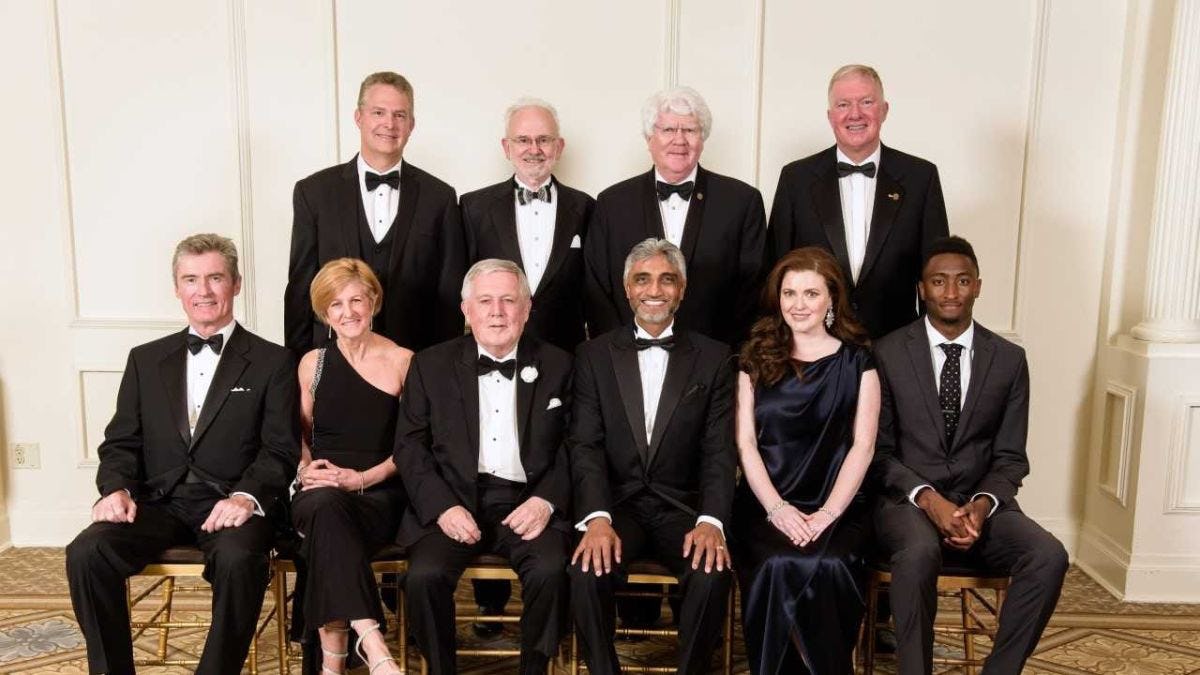 They included an eight-time Grammy Award winner, a YouTube megastar, top executives from SpaceX, MetLife and Wall Street, and a highly esteemed professor and benefactors who enable Stevens students to go out into the world and make a difference.

The 2018 Stevens Awards Gala on April 14 honored ten elite alumni who have enjoyed extraordinary professional success while many have also propelled the university and its students to greater heights through their years of service and philanthropy. The fifth Stevens Awards Gala returned to the historic Plaza Hotel in New York City, where these honorees’ achievements were celebrated by more than 400 members of the Stevens community.

The university’s remarkable progress over the past several years, as well as its outstanding alumni, were a topic of discussion and pride, and the glamour of the evening befitted the festive mood. Two stages — one to honor the awardees and another for the evening’s musical entertainment — greeted the audience this year, as they were treated to the show tunes and fancy footwork of Broadway performer Tony Yazbeck as well as the jazz sounds of the Bryan Beninghove Quartet, with Stevens students also lending their vocal musical talents. Chris Cimino, News 4 “Today in New York” meteorologist, returned as host.

The 2018 awardees proved how far — and in what a rich tapestry of fields and achievements — that a Stevens degree and the Stevens experience can take you. “These individuals have left an indelible mark on the world through their work, their benevolence and their character,” said Stevens President Nariman Farvardin. Newton, the founder of Soundmirror, a music recording and production company, has won eight Grammys and one Emmy, and his company has earned more than 100 Grammy nominations. Newton thanked his wife Janice for supporting him through his career ups and downs and saluted his broad-based Stevens education that was perfectly suited for the problem-solving challenges of his career.

A fervent belief in the redeeming power of technology was echoed by Hazelwood, who has advised numerous senior design teams and is a professor in the university’s biomedical engineering program. She told the audience that she always challenges her students to put their knowledge to good use, be it to help improve surgical outcomes or allow people with disabilities have greater access to their world.

“We know that science and technology has no value unless it’s applied for the benefit of society,” she said emphatically. Over the past several years, nearly 50 of her Stevens students have been awarded patents, a dozen more will file patent applications this year and several have also started their own companies. Her respect and admiration for her students was obvious, as she called them “some of the best, brightest and most savvy engineers in the world.

While the awardees could have easily offered fascinating perspectives on their wide breadth of professional expertise, they all returned to the personal, to give heartfelt thanks to those who have guided them along the way.

SpaceX CIO Venner opened by thanking his father, Ed Venner ’56, who “tinkered with everything and made it better,” and allowed him to ask lots of questions, always taking the time to stop whatever he was doing to answer them.

He offered praise for his Stevens education and for several mentors, including former Stevens professor Dick Magee ’63 M.S. ’64 Sc.D. ’68 and his current boss Elon Musk, the founder and CEO of SpaceX, “the most challenging person I have ever worked for in my life,” the smartest person he ever worked for — and a person, Venner says, who will “make man a multi-planetary species.”

But Venner saved his greatest wonder for last — his wife, Debbie.

“She not only supports me; she improves me,” he said. “I believe that great engineering capability, and great people skills, are the foundation for what makes a great engineer.”

Relationships have propelled many of the awardees, among them Lifetime Achievement Award winner Valerio. The longtime Stevens Alumni Association leader and volunteer and adjunct professor saw friends travel from as far as Texas and Michigan for his special night.

“These relationships are one of the many gifts I have received over the past 50 years,” Valerio said, quoting the poet John Donne that “No man is an island,” and recalling the many people, from his student days to today, who have served alongside him as volunteers and strong supporters of the university for decades.

Board of Trustee member Semcer, the chairman and CEO of Micro Stamping Corporation, saw some 80 people — his children, grandchildren, employees, classmates, all like family — turn out to celebrate him.

“This is a family award and a family spirit,” he said, calling Stevens “my second home” and recalling the great spirit and camaraderie born on campus more than 50 years ago, continuing through his 50th reunion to today. Semcer has supported his alma mater in numerous ways, from mentoring and internship opportunities for students to philanthropic contributions, among them a recent gift to support a lab in the university’s Center for Healthcare Innovation, scholarships for biomedical engineering students and a faculty chair. Stevens and its education brought him success and great fulfillment; “It was and is part of my life forever,” he said.

Another of the evening’s many smashing success stories is that of youngest honoree, Brownlee, whose YouTube tech products review channel, MKBHD, has been viewed 1 billion times. Brownlee told the audience that it was an honor to be among such established awardees, and saluted Stevens’ business school for teaching him how to see products from a company’s perspective.

He also looked to the future, noting that Stevens students will find their education valuable for fields that, likely right now, don’t even exist.

Meanwhile, McKeever, co-founder and chief investment officer of Ides Capital Management LP, shared a heart-warming story of how Stevens cares for the individual student, a fact she learned when she faced a last-minute student crisis. Just a few short months before graduation, she discovered that she was one credit short of graduating because she was missing a gym credit. “I was so fortunate to be at Stevens,” she noted, as the Registrar’s Office and the women’s volleyball team helped arrange for her to practice with the team every day to earn that last credit.

Shah, chairman, president and CEO of MetLife Japan, noted that this award “is equally a recognition of my family and of Stevens, and how these two things shaped my life and career.” Emigrating with his family from India, Shah pursued engineering studies at Stevens. Praising his education and reflecting on his career, Shah identified three important behaviors that he learned during his years at Stevens and that made a major impact on his future career: Challenge the status quo, “we always can do better;” experiment with new ways of working; and collaborate, show humility and recognize that this type of problem-solving can often lead to innovative solutions. He also shared that his niece and son are continuing the family legacy at Stevens, with his niece now enrolled and his son entering this fall.

Boswell, the newly minted chairman of the Stevens Board of Trustees who was honored as a prolific entrepreneur through his work with his engineering firm, Boswell Engineering, and as co-founder of ConnectOne Bank, took a moment to salute his alma mater’s progress and its students.

“An award is only as special as the place from which you receive it,” he said. “Stevens is not only on the rise but, for all of you techies, we have increased the slope of the line.”

The awards, he said, are a way to recognize the entire Stevens community, including its students. “The Stevens community is about giving these kids an opportunity to soar,” he said. Hanlon, who is founder and CEO of Hanlon Investment Management and a Stevens Board of Trustees member, echoed this praise of the university’s students and its progress, while applauding President Farvardin and the Stevens leadership. Hanlon and his wife, Cathy, helped to launch the Hanlon Financial Systems Center at Stevens, and Hanlon reflected that “helping Stevens on its storied journey is a passion close to my heart and one that allows Cathy and me to express our deepest gratitude to this school and its leadership.” Cynthia Hassler ’11 M.Eng. ’12 attended the gala to cheer on her former professor, Hazelwood, who has been a longtime mentor.

“She was tough, she demanded a lot,” Hassler recalled of Hazelwood. “She definitely prepared you for the future. She cared a lot about you as an individual.”

The evening ended up being an eye-opener and reminder of the special place that Stevens is, Hassler said.

“Elon Musk works with a Stevens grad — that’s humbling and motivating,” she said. “And it’s nice to be reminded of the awesome things that Stevens and its alums can do.”

To learn more about the award winners and to view videos of their acceptance speeches, please visit Stevens on YouTube.