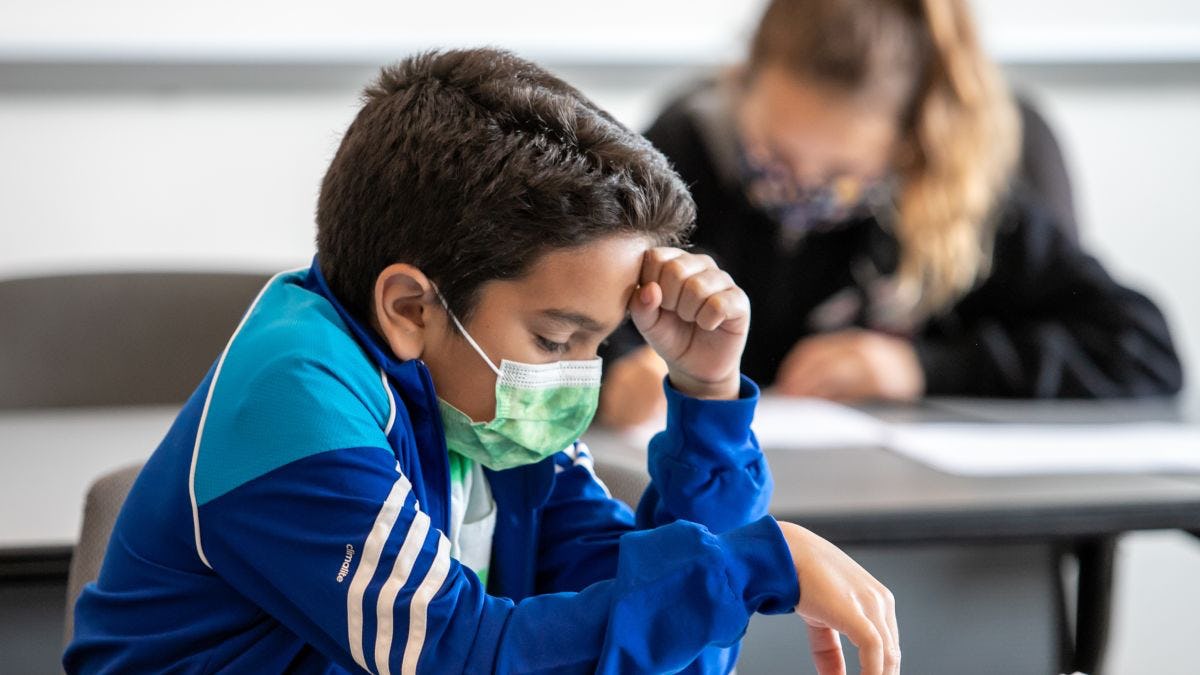 Mathematics is a powerful tool that helps us understand the world in which we live and solve complex and real problems. It’s all around us and in everything we do–and that’s never been more clear than at the sixth annual Stevens Math Olympiad.

Over 350 registered students attended the 2022 Stevens Mathematical Olympiad on Saturday, May 21. The annual event, open to students in grades 3-12, is hosted by the Department of Mathematical Sciences and aims to stimulate an enthusiasm for mathematics that will strengthen mathematical intuition and inspire creativity. This year’s competition was held in-person on campus at Stevens Institute of Technology for the first time since 2019, due to the COVID-19 pandemic.

After being cancelled in 2020 and held virtually in 2021, first-time and returning attendees were eager and excited to arrive on campus.

“This is our first time on the Stevens campus,” stated one parent of an elementary school student. “My daughter attended the Stevens Math Olympiad virtually last year, which was a great experience for her, but she is really excited to be here today around other students.”

Another parent of sons in both high school and middle school expressed, “It was very important for me to sign up my children for this event. I like to get involved in their education and this is good in terms of their development. We made it our priority this Saturday to be here!” 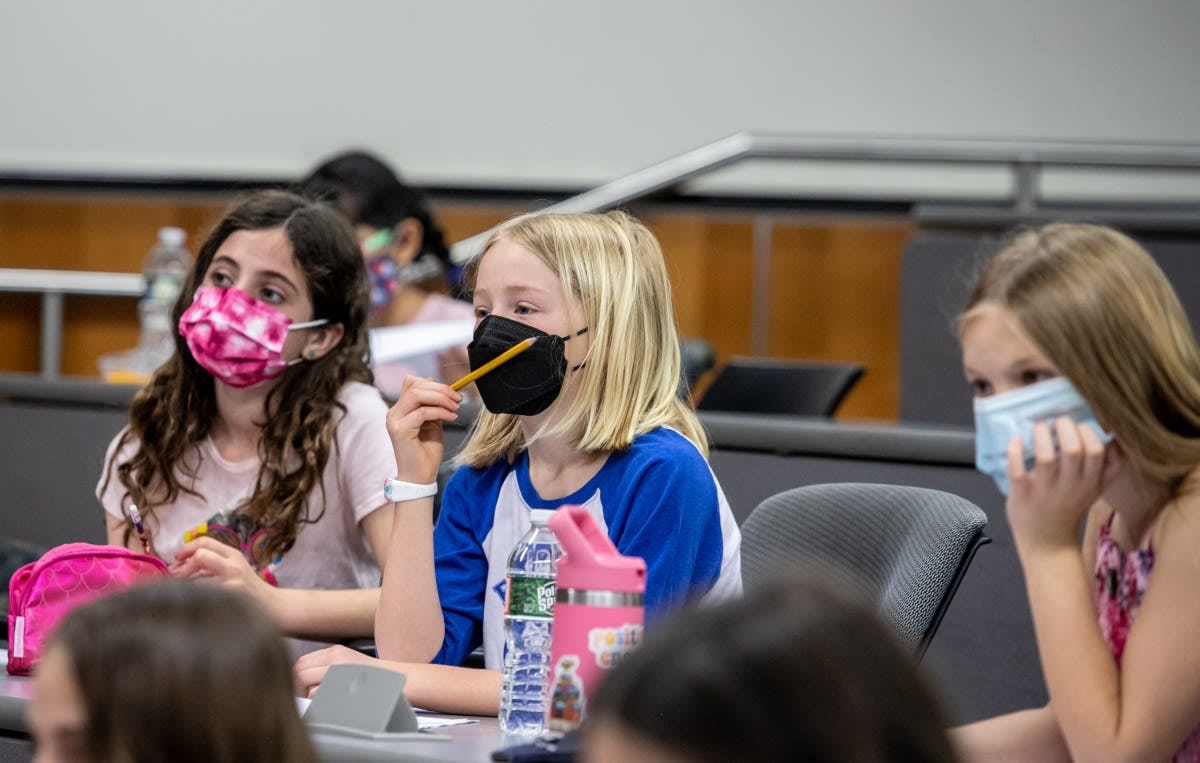 Participants in each grade level received a test consisting of 15 short-answer questions which increased in difficulty as they moved through the questions. Though challenging, the tests are designed to be approachable for students of all backgrounds. As a bonus, references to classic TV shows, video games and movies were added where possible, making the tests fun for every student. Volunteers throughout the testing rooms provided additional support to students who needed assistance with the problems.

As testing began for elementary and middle school students, high school students and all parents, guardians and chaperones were invited to the event’s welcome and opening remarks given by Pavel Dubovski, Chair of the Math Olympiad Committee and Teaching Associate Professor in the math department, and Nariman Favardin, President of Stevens.

This year’s guest speaker, Po-Shen Loh, a Carnegie Mellon University mathematical sciences professor and USA International Mathematical Olympiad Coach, joined the event virtually. Though on screen, the mathematics professor ensured that he engaged the crowd, offering a QR-based tool that allowed the audience to engage by chat. 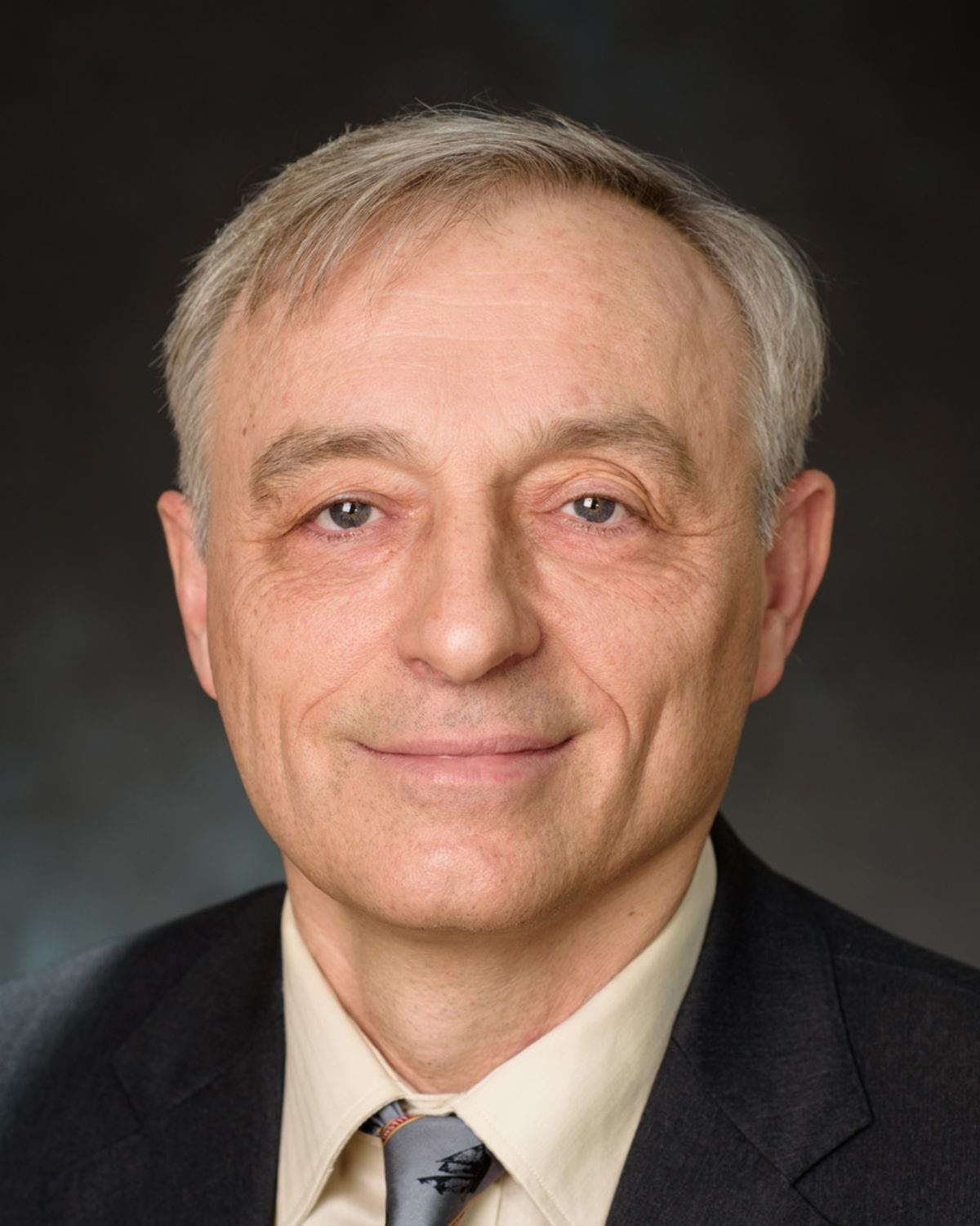 “The Stevens Math Olympiad has been a wonderful event on multiple fronts,” shared Jan Cannizzo, Teaching Assistant Professor and Associate Chair for Undergraduate Studies in the Department of Mathematical Sciences. “It's helped us attract excellent students to the Stevens campus and the department and, more importantly, allowed thousands of participants of all backgrounds and age groups to share in the joy of mathematics.”

Upon greeting the crowd, Dubovski acknowledged many of the returning students, now rising seniors in high school, who attended the first Stevens Math Olympiad six years ago. According to a post event survey, about 56% of the students in attendance were returning participants.

“I had a good experience. It’s not my first time here for the Math Olympiad, so I will probably be back again next year when I’m in high school,” shared an eighth-grade student. 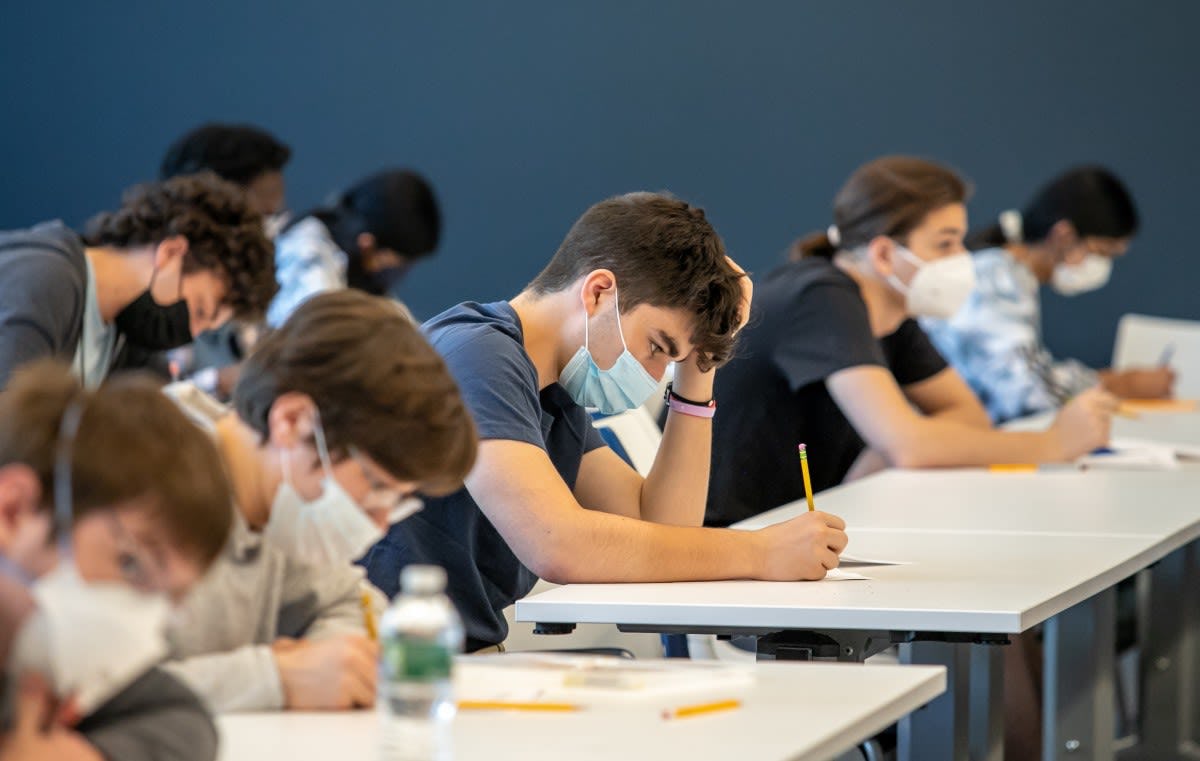 All participants received their test scores via email in early June. Top performers from each grade were invited back to the Stevens campus for the 2022 Math Olympiad Awards Ceremony, to be held on Saturday, June 18.

“Next year we will have the Olympiad again. I hope many former participants will come again. I expect to publish the book of Stevens Olympiad problems, which will review the methods for solving challenging problems,” shared Dubovski.

Out of the box inspiration to real life impact

Approaching challenges in innovative ways, conceptualizing problems differently and thinking of something new is very important, specifically for what Loh described as “the kind of mathematics going on today.” This mathematics, which moves into educational lanes of literacy and visual cues, allows students to read the problems and then make sense of them.

After asking the audience if they knew whether the Olympiad test questions would be hard and receiving an overwhelming number of yes responses, Loh then asked if anyone knew what makes them hard. 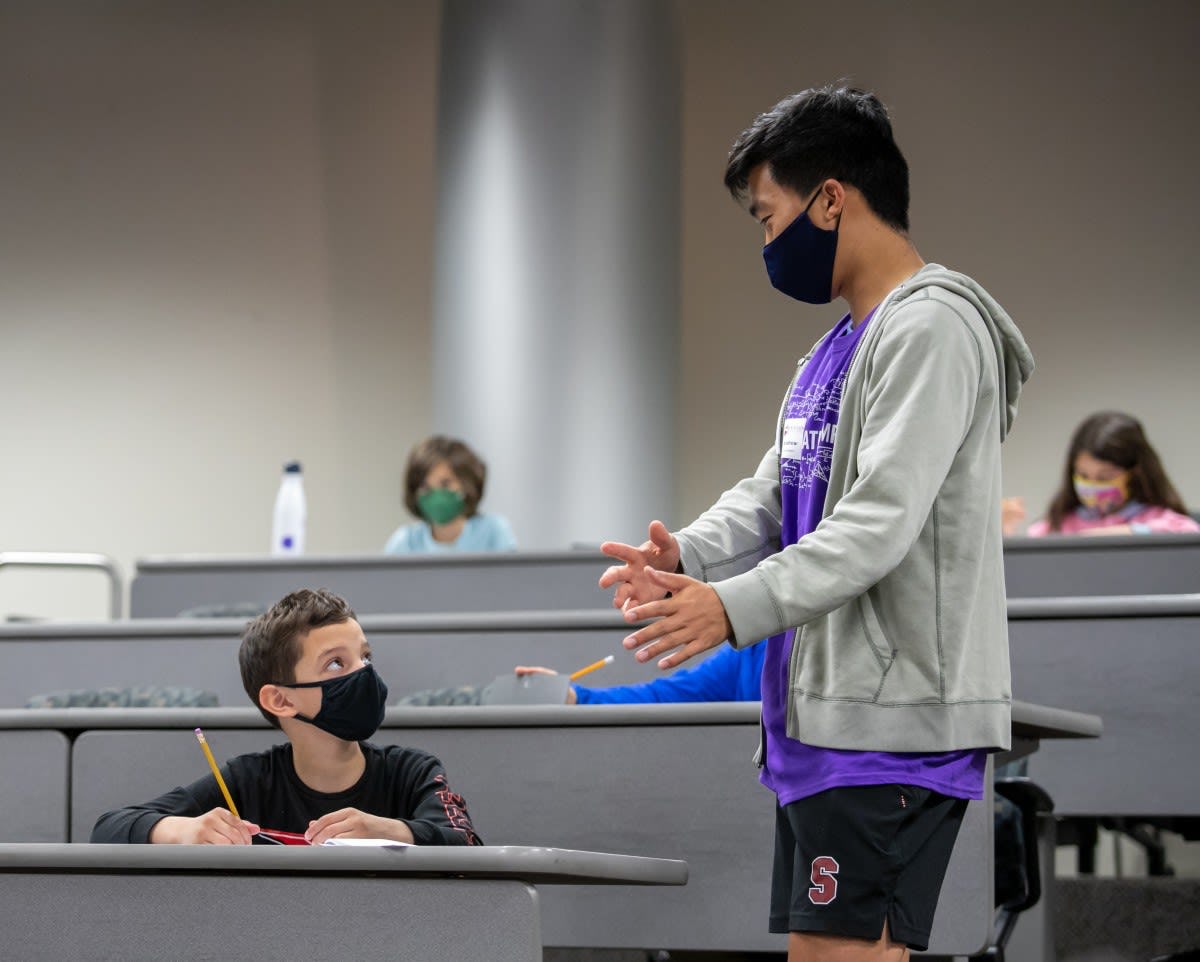 Loh, who spent his childhood working on similar “hard” questions without a set answer, shared how those types of questions have prepared him to come up with new solutions to the problems we are currently experiencing in the real world. Referring to his new approach for disease control–the NOVID app–in which he empowers users to directly avoid infection themselves; and his new infrastructure for online math learning that helps solve the issue of teacher shortage for gifted education.

“As all mathematicians know, out-of-the-box thinking is central to authentic mathematics,” expressed Cannizzo. “It is also central to problem-solving more generally, so solving a good math problem is an excellent way to become a creative and careful thinker in other areas. Given the challenges that face the world, it's important that future generations acquire such skills.”

Mathematics is the key…to everything

Every career and field rely on mathematical principles. Particularly in today’s science and technology-driven world, mathematics is essentially the building block for everything in our daily lives. Moreover, the problem-solving skills obtained from mathematics can help us tackle complex problems on the job, as well as in other areas of life. 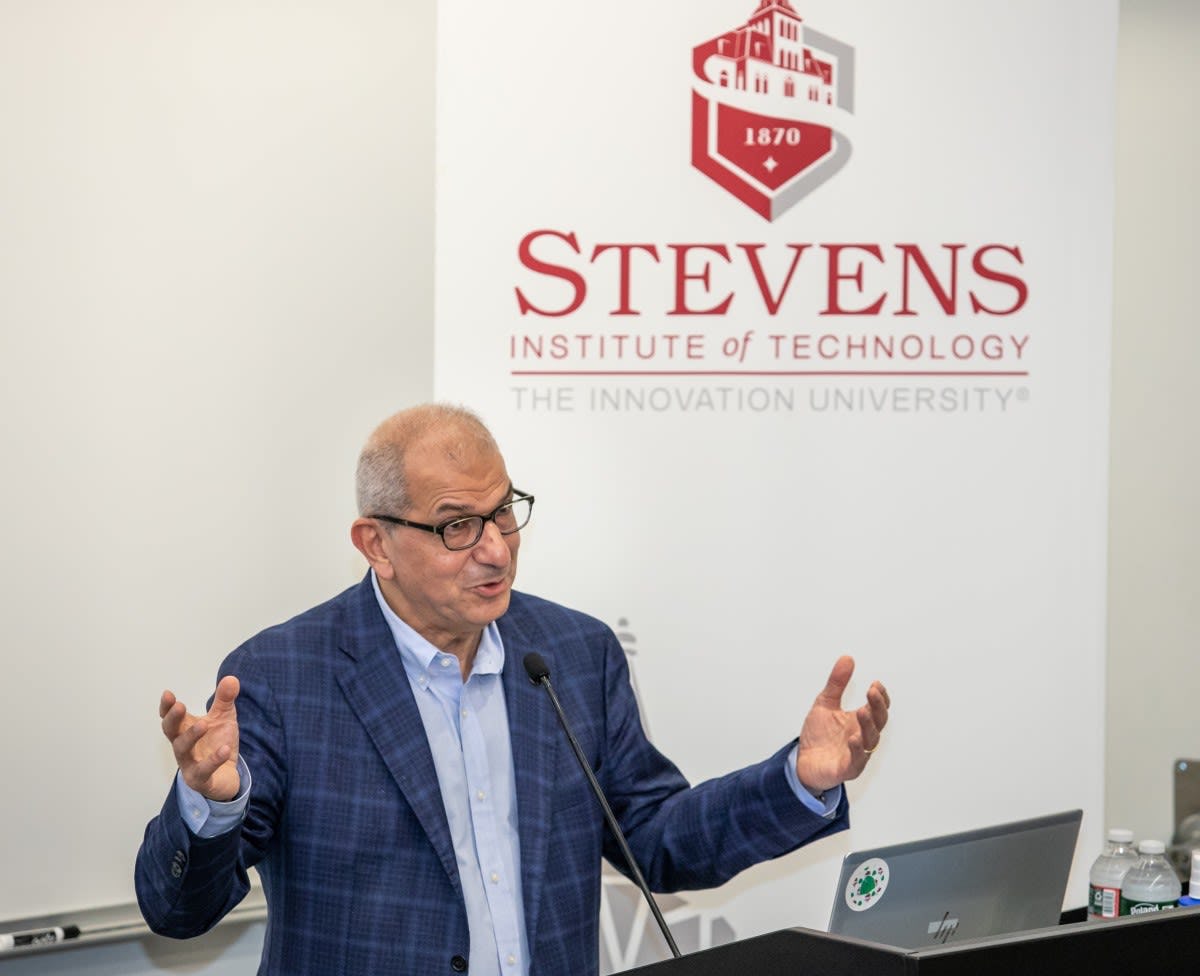 When Loh asked students what they wanted to be when they grew up, he received a wide variety of responses–though mostly in STEM–from psychologists to software engineers. “Sometimes people are wondering if you do a math contest, how is that related to what you want to do someday? What I want to say is what’s interesting is that if you do mathematics, then you can actually do all these things.”

Favardin, whose own father went out of his way to instill a love of mathematics in him at 4 years old, also shared how his knowledge of mathematics has assisted him every step of the way throughout both his personal and professional life. Furthermore stating, “regardless of what you want to become in the future, whether you want to become a physician, or a financial analyst, or an engineer, or a healthcare specialist, or someone who specializes in applying artificial intelligence principles to advanced transportation systems, mathematics is going to be a fundamentally important tool to enable you to excel and succeed.”

Note: All images of participants are featured with their consent.