Dean's Lecture Series: How Chance Events Can Steer a Career 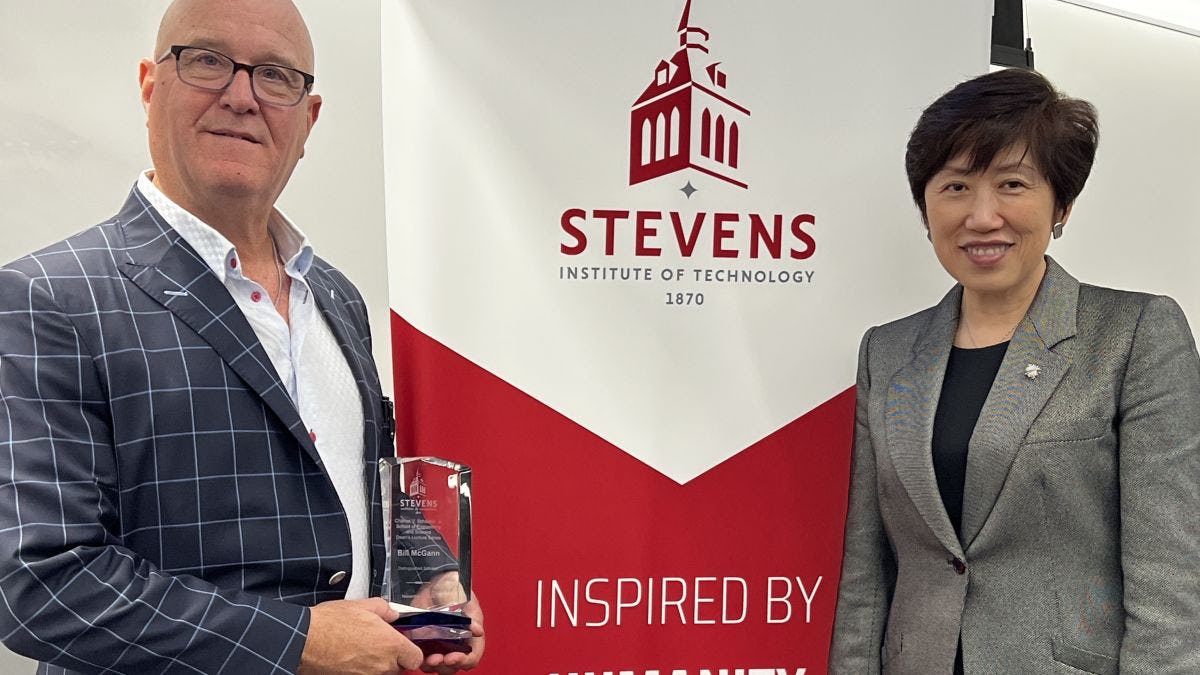 Serendipity is a great friend of human progress. It happens when pure chance or accident leads to an important discovery. Without it we would not have had the discovery of penicillin or x-ray machines or microwave ovens or a host of other marks of the modern age.

William McGann, Ph.D., chief technology officer for Quantum Computing Inc., described some of his own encounters with serendipity as he delivered this year’s guest lecture in the Charles V. Schaefer, Jr., School of Engineering and Science Dean’s Lecture Series, hosted by Dean Jean Zu.

In McGann’s presentation, titled “Transforming State-of-the-Art Science into Technologies for Global Applications,” he explored his 30-year history of innovations at the intersection of physics and chemistry that enabled the development of ultrasensitive detection applications and the underlying use of multi-disciplinary scientific principles.

During his presentation, he noted real life examples of the adage that necessity is often the mother of invention, especially when it comes to security and government.

He would know – his career was kicked off in earnest by a series of shocking events that rocked the world. The first occurred on December 21, 1988, when a terrorist bomb planted aboard Pan Am flight 103 blew the Boeing 747 out of the sky over Lockerbie, Scotland, killing all 259 people aboard, plus a dozen others on the ground.

The FBI and other agencies seeking to prevent future potential bombings had become frustrated over the lack of a technology for remote detection of the presence of plastic explosives such as Semtex, the material that took down Pan Am 103.

“In effect,” said McGann, “during the 1990s a whole new industry emerged around the detection of explosive materials, and we were smack in the middle of it.” The “we” were himself and a few other scientists who had founded a small research startup in 1990 that developed molecular detection tools like raman spectroscopy.

A Decade of Bombings

The Pan Am 103 disaster was just the first. Hundreds of other lives were lost when in 1993 there was the first World Trade Center bombing in New York, followed in 1996 by the Khobar Towers bombing in Saudi Arabia, and in 1998 by the U.S. embassy bombings in Kenya and Tanzania.

McGann’s startup found success in developing technologies to help alleviate these issues, launching his career trajectory in a very specific direction. The company was eventually acquired by the General Electric Corporation as part of the GE Security Division, where he became chief technology officer. He would later serve as CTO at L3Harris Technologies, working on its security and detection products, and still later as vice president of engineering at United Technologies in its Global Fire and Security business. 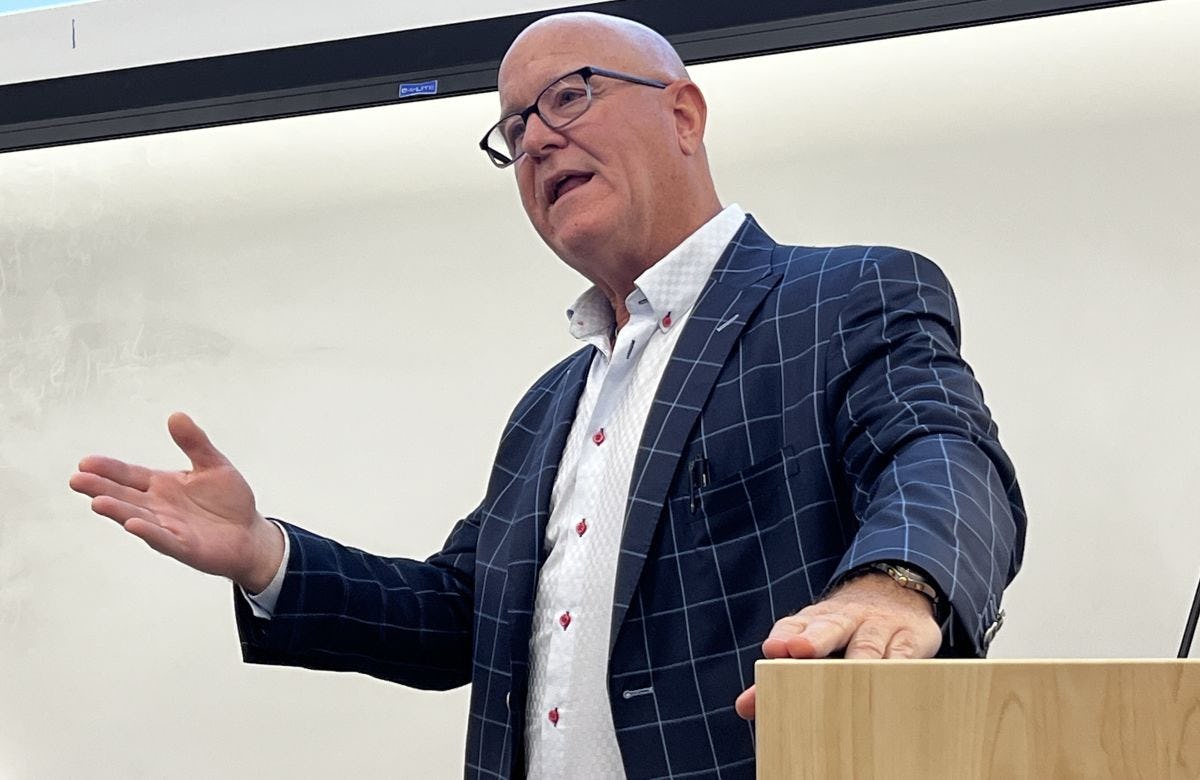 Throughout his guest lecture, McGann presented the range of technologies involved in molecular detection systems, demonstrating successes in commercial applications and immersion into a learning-based culture of innovations, and showing how personal commitment and intellectual curiosity can drive small teams and individuals to have a dramatic impact on transforming the world.

He discussed “the future state of aviation security detection,” with emphasis on the need to lower the costs of airport security by increasing the speed and efficiency of detection devices.

“The current arrangements for airport security,” he said, “are not sustainable, given the growth of air travel and air transport. Detection systems must be able to pick up anomalous signals from higher volumes of people and packages and at greater and greater speeds. The uptime on these machines will have to increase as well.”

McGann made it a point to reiterate to students in the audience that this career path wasn’t something he planned. It was only a little more than five years prior to launching his startup that he earned his Ph.D. in physics and chemistry from the University of Connecticut. While studying for his Ph.D, his research was focused on the dynamics of excited-state energy transfer in photosynthesis. “That was something that maybe six people in the world knew anything about,” he said. “What, you may ask, was I thinking when it came to planning for a future career? The truth is I never did do any planning for what I might do after grad school.

“I was, however, newly married, with a wife and child, and I needed a job.”

It so happened that studying the energy involved in photosynthesis necessarily draws the researcher into the strange and mysterious forces in play at the sub-atomic level. So McGann was actually entering that surreal branch of physics known as quantum mechanics, knowledge of which was growing in demand in many areas of science and industry.

His first job as a Ph.D. holder was at an R&D shop doing research for the U.S. government. “My job was to grow and characterize solid-state radiation detectors of high-energy photons at room temperatures.” Little did he know what his deepening understanding of the physics around photons would lead to.

McGann would eventually serve in senior executive positions at companies like United Technologies and General Electric as well as much smaller start-ups. He would author more than 70 research proposals to the federal government and technical papers appearing in numerous publications. He was also primary inventor or contributor to 23 U.S. patents.

After more than 30 years of activity, he hung up his lab coat and retired. Not long after that, though, Quantum Computing Inc. (QCI) came calling. They wanted him to join the Leesburg, Virginia-based company as chief technology officer, and without much hesitation, he un-retired.

It was through this position that McGann found himself giving a guest lecture at Stevens Institute of Technology. Just a few months ago, QCI acquired the Stevens-based photonics venture, QPhoton, headed by quantum computing scientist Yuping Huang.

Huang is also the director of the Center for Quantum Science and Engineering, a major quantum technologies research center at the School of Engineering and Science. Huang now holds the title of chief quantum officer at QCI, and his startup office in Hoboken has become QCI’s second location – and McGann’s new home away from home.

He’s excited to once again be at the forefront of developing leading-edge sensing innovations along with impactful advances in quantum computing with Huang and his team, who are developing new security applications utilizing quantum technologies.