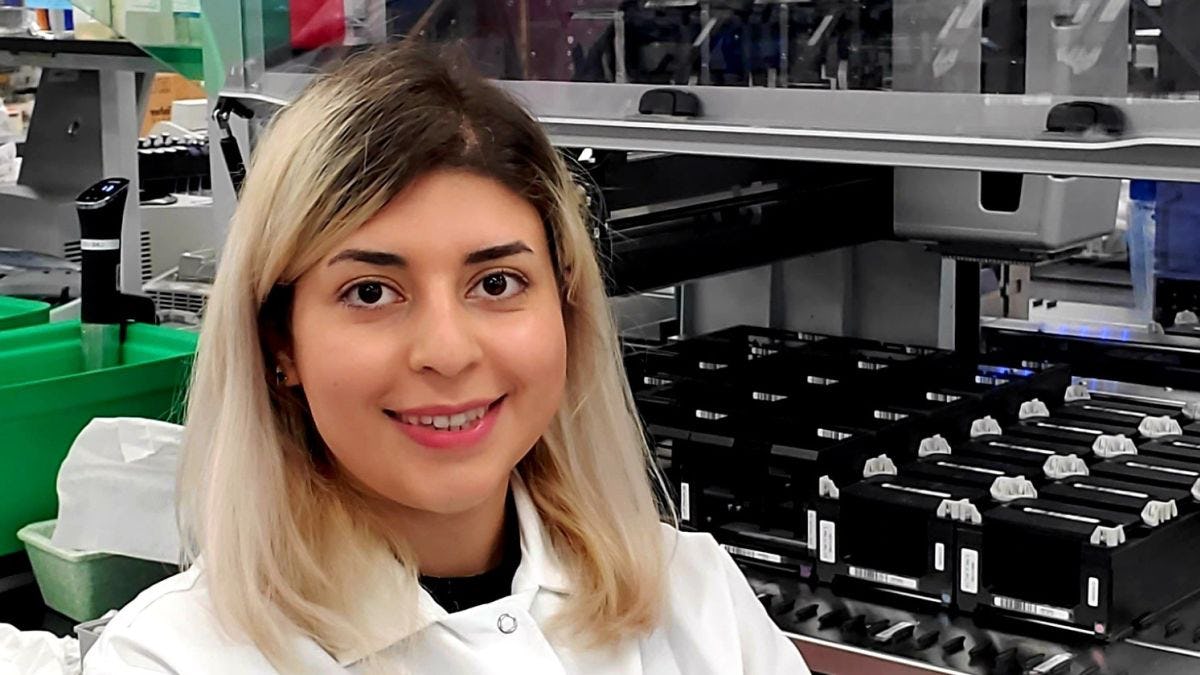 While the discovery and production timeline for an effective COVID-19 vaccine remains uncertain, schools and businesses across the country are formulating plans to enable a return to relative normalcy. For many organizations, frequent testing of employees is a key component of a safe reopening strategy. But how can COVID-19 testing procedures be scaled up to quickly serve such a large population when tests are in short supply and take days to process? That’s where Yasamin Aliashrafi Jodat M.Eng ’18, Ph.D. ’19 — and robots — come in.

As an automation engineer at Ginkgo Bioworks, a Boston-based biotech company that designs, modifies and produces custom organisms for a wide variety of industries, Jodat helps create the infrastructure platforms that enable the company to test and sequence DNA quickly and efficiently. “As part of my role, I am designing these integrated systems,” she explains. “I connect different robots — like liquid handling robots and robots that can do specific work often handled by technicians … the part that is tricky is to integrate everything so that robots can work together in a way that biological constraints are met and get us to a product.”

Though the process may sound like science fiction, it’s just a clever combination of mechanical engineering, computer science and biology. “Basically, the idea is to give the system a biological recipe, translate this to a machine language and then let it perform,” she says.

Pre-pandemic, Jodat was programming platforms for a wide variety of applications, including the development of biologic drugs — living organisms that can activate the immune system to fight diseases like cancer. She beams when describing the impact such innovations could have, like replacing protein- and chemical-based pharmaceuticals to usher in a new era of personalized medicine.

Since early spring, however, Jodat has been part of Ginkgo’s $70 million initiative to repurpose its automated DNA sequencing capabilities to scale up COVID-19 testing. She explains that most testing is done at a diagnostic level; in other words, only individuals with symptoms are being tested. “The main concern for businesses and schools is that they can go back to business and open their environments. At the same time, they want to make sure that they are safe and don’t cause any outbreaks,” she says. By moving to a screening model, larger groups could be tested more regularly, allowing infections to be caught earlier – including in people who are asymptomatic.

With these new technologies … we can make biology easier to engineer — we could really change the way we look at medicine.
YASAMIN ALIASHRAFI JODAT M.Eng ’18, Ph.D. ’19

Most COVID-19 tests are processed using a technique called polymerase chain reaction (PCR). Machines currently used to process PCR tests have limited capacity of a few thousand tests per day. The high throughput testing system Jodat is working on could churn out half a million tests per day. “You’re going to have beyond human capacity,” she says. “We can design platforms that can run tests simultaneously. We can design robots to work outside the human shift so that these automated systems run 24/7.”

Her company is already preparing to deploy on-site testing services to businesses and schools. Coupled with other preventive measures like contact tracing and supported isolation for the sick, Jodat is optimistic that the system she is designing can make a real difference in public health until a vaccine is developed.

Although she now sees herself pursuing a lifetime career in bioengineering, Jodat’s passion for the field is relatively new.

While adjusting to her move across the world, she made the decision to pivot her research focus as well. “I started from zero,” she says. “It was very challenging at first because I had no hands-on experience of biology or cell culture… I started to learn everything in this area at Stevens in the lab.”

As her knowledge base grew, she became especially interested in the field of tissue engineering. With the support of her Ph.D. advisers, Dr. Manu Mannoor, assistant professor of mechanical engineering at Stevens, and Dr. Su Ryon Shin, assistant professor and principal investigator of medicine at Brigham and Women’s Hospital, Harvard Medical School, she completed her dissertation in collaboration with Harvard Medical School and continued her work with them following graduation. The team’s research, published in the journal Advanced Science in January 2020, centered on the development of a 3D-printed bionic nose, complete with olfactory functionality made possible through an integrated electrochemical biosensing system.

Through her research and in her daily work, Jodat sees the power of scientific synergy to transform our world. “Bioengineering is relatively new compared to other fields like mechanical engineering,” she says. “Interfacing these different fields is generating new tools. For example, 3D bioprinting is one of them.

“And with these new technologies … we can make biology easier to engineer — we could really change the way we look at medicine.”