Reporting for Duty: Stevens Alumni Have Served Country for Generations 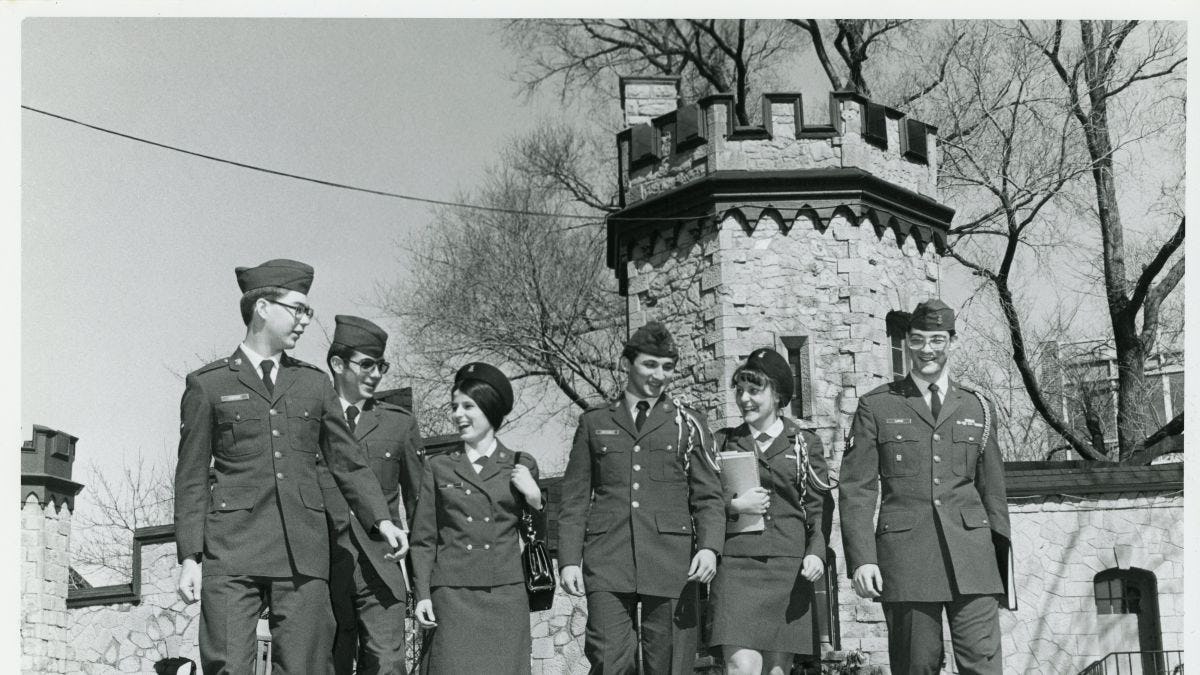 Few physical landmarks remain of those years when Stevens Institute of Technology was a World War II training ground for young Navy engineers — top technical minds who would help lead the Allies to victory. There is still Palmer Hall, where Joe Schneider ’46 and other Navy “V-12ers” kept their dorm rooms spotless, always anticipating an inspection. And Walker Gym, where they boxed to keep in shape and tread water in the old basement swimming pool, using their shirts as flotation devices.

But at 95, Schneider, a World War II Navy veteran, holds vivid memories of those days, so vivid that when he pulls out his 1945 Link yearbook, he easily identifies Ensign William Bailey, a former All-American football player who conducted those inspections. (“Bailey was a pain in the rear end.”) He remembers how the field now near the Torchbearers statue became a dust bowl from all their marching, and the daily calisthenics at 6:45 a.m. that kept them in the shape of their lives.

“It kept us busy. It kept us out of trouble,” Schneider says. “I think it was a good life, and it was good for us. I think everyone stuck together.” Stevens’ history is filled with moments when it answered the call to serve its country, whether it was the entire university transforming into a military camp for the war effort, researchers tackling engineering and science challenges for the military or individual students serving their country in all five branches of the armed forces. Indeed, this service to our nation by Stevens students and researchers continues today.

The number of Stevens students now enrolled in the Army ROTC and Air Force ROTC programs is relatively small — some 15 in all. But with the reactivation of the Stevens Veterans Office in 2009, the university is continuing its tradition of support for the U.S. military by serving our military veterans and their families. With Stevens professor and former Marine Don “Doc” Lombardi leading the effort, Stevens was the first school in the New York metropolitan area to receive the Yellow Ribbon designation from the U.S. government. The Yellow Ribbon Program, along with the GI Bill, provides full educational benefits to selected military veterans and their dependents; since 2009, more than 170 veterans and children of active duty military members have been educated at Castle Point. They walk the same campus that soldiers, sailors and airmen and women have walked for generations.

ON DUTY FOR TWO WORLD WARS

The 1919 edition of The Link yearbook recalls the year 1918 as a momentous one at Stevens — when World War I still raged and every student who was physically qualified enlisted in the Army or Navy. The U.S. War Department’s Committee on Education and Special Training selected Stevens as the site of the country’s only Navy Steam Engineering School, designed to train future engineers for the war effort. The cadet barracks, known as the Navy Building, is now the site of the Babbio Center.

“When it became apparent that we must take advantage of existing educational facilities not under government control, we naturally turned to Stevens for help,” wrote then-Assistant Secretary of the Navy Franklin D. Roosevelt. “Your response was immediate and most generous. There were no preliminary negotiations — nothing but an expression of sincere desire to help in every way in which you could be helpful.” With Roosevelt as president a generation later during World War II when victory was uncertain, the Navy V-12 program was instituted at Stevens and other universities in 1943. The V-12’s mission was to provide officers for the nation’s fleet and train future engineers in technical skills the Navy needed for the war effort, to “make, maintain and manufacture sensitive machinery of modern naval warfare,” according to a Stevens 75th anniversary booklet published in 1945. Tuition was free; participants had to score well on an entry test to be admitted and received a commission as a naval ensign along with their Stevens degree at graduation.

Schneider, who had been attending Stevens on a partial scholarship, enlisted in the Navy on Dec. 8, 1942. Enlisting and joining the V-12 gave you a chance for more training and ultimately better assignments, he said. He came from a poor family in Fairview, New Jersey, and says that the biggest break of his life came when his high school teacher warned him to straighten up and study so he could attend college. His second break was joining the Navy and getting full tuition at Stevens.

With very few exceptions, everyone was V-12 at Stevens during those years. They wore tan uniforms or white uniforms every day, formal uniforms for officer inspections. Dorm rooms were bunk beds, barracks style. It was a regimented life of “marching, studying, eating,” Schneider says.

Photos from The Link show students marching everywhere, it seems: near the old Castle, past Walker Gym, all around the athletic field. Officers inspect the troops, and there are heroic portraits of sailors in uniform and the color guard raising the flag on what is now DeBaun Field.

But Schneider also remembers many moments of normal college life: playing lacrosse, performing trombone with the Navy band. He doesn’t recall much visible anxiety among the V-12ers. “I think the war was not on our minds because we were studying,” he says. It was the exams that made them worry. But, in the back of everyone’s mind, so did the prospect of flunking out, as that could mean being drafted into combat, he says.

Schneider would go on to graduate from Stevens and later serve as a deck officer aboard the USS Karin, and as an engineering officer on the USS Elkhart, during the final days of the war. He left active duty in 1946 and returned to run the family-owned embroidery factory in Guttenberg, New Jersey, where he started as a teenager and still works today. Without the V-12, Schneider says he never could have paid for college and likely would have been drafted into combat. His stepbrother Walter, who didn’t attend college, got a job with the Civilian Conservation Corps in Texas, he recalls. Walter was later drafted into the Army tank corps and killed in action in Italy.

THE COLD WAR, AND MEMORIES OF KOREA

The Cold War era and the Korean War saw Stevens students join the Army ROTC and the Air Force ROTC, and Frank Battista ’54 was as enthusiastic an Air Force cadet as they came. In the early 1950s, about 40 percent of the campus was ROTC, and this shy kid from Richmond Hill, Queens, New York embraced the military’s regulations and structure. “I ran away with the thing,” he says. While some of his engineering courses were a challenge, he thrived in his ROTC classes — air science, tactics, meteorology. He dreamed of flying jets.

“ROTC classes carried as much weight as science and math classes, thank goodness! The pressure we lived under four years at Stevens — the military and North Korea didn’t pose that much fear in me,” he says. The day he graduated and got his gold officer bars was one of his proudest.

After Stevens, it was determined that his eyesight was too poor for him to become a pilot, so he became an Air Force maintenance officer, with the task of keeping aircraft safely in the sky. Battista would spend 12 months at Kimpo AFB in Korea, ten miles from the DMZ, roughing it out in tents, with the North Koreans threatening in the nearby mountains. He would serve a total of seven years, with three years active duty, rising to the rank of captain. “I still feel proud,” he says. “It was a wonderful experience. I sweated out 12 months in Korea, thinking anything could happen at any time.

“It worked out. It was great practice for civilian life.” Battista went on to a successful career as a self-employed manufacturer’s representative in the electronics industry.

ANXIETY OF THE VIETNAM ERA

By the mid-1960s, enrollment in the Army and Air Force ROTC was about 20 students per class, there was a pretty high “esprit de corps” and students were proud to wear their uniforms to class, says retired Stevens history professor Silvio Laccetti. But after the Tet Offensive in 1968, Stevens’ ROTC students felt a little more pressure, as schools like Columbia and Harvard faced anti-war protests and later dismantled their ROTC programs. Back in the Vietnam era, Laccetti recalls several anti-war protests at Castle Point, but ROTC students were never a target.

“In addition to patriotic reasons, many students enrolled in ROTC because they didn’t have the money to go to Stevens,” Laccetti says. “This was a good way to start your life.” He remembers the ROTC students as structured, good students who worked hard.

Graduating ROTC meant you came out as an officer with a commission, with more options than those drafted. (Students owed the military four years of service after graduation.) Anxiety about the draft — and about flunking out of Stevens and facing the draft — was very real.

Mike Rinaldi ’71 M.S. ’73 recalls ROTC as having a strong presence at Stevens when he was a student. A full scholarship or tuition assistance, a commission and the draft — all propelled him and others to join, he says.

The ROTC stopped doing drills for a short time on campus after the U.S. invasion of Cambodia in 1970, and he recalls some protests, but never any hostility from his fellow students. Air Force ROTC extended his learning at Stevens, he says, as he studied not only physics but also radar systems and the technology of weapons systems and aircrafts.

Now a software engineer, Rinaldi’s favorite ROTC memory was broadening his knowledge of foreign and domestic affairs, including NATO and the politics of Southeast Asia, expanding his world beyond Castle Point. “It wasn’t just military drills and pushups… it broadened and deepened your intellectual horizon and augmented one’s humanities education,” he says.

In the post-Vietnam era, with the end of the draft and the start of the all-volunteer military, Stevens saw its ROTC numbers drop. Stevens would later launch joint agreements with Seton Hall University and New Jersey Institute of Technology (NJIT), and officer training for Army ROTC now takes place at Seton Hall while Air Force ROTC takes place at NJIT. Air Force Lieutenant Colonel Lady Noreen Santos Simmons ’04 got her start in the military as one of these “cross-town cadets” traveling to NJIT every Wednesday for drills and classes. She enjoyed getting to know students from other schools, and says that between ROTC and Stevens, she received full scholarship support that made all the difference. It not only gave her a good engineering education that would later lead to a successful military career, but also allowed brand new experiences, such as learning to fly gliders during an ROTC summer program.

“Being 19 years old, flying a glider and staying at the Air Force Academy, that’s cool,” she says. Simmons never thought she’d stay in the military but every time she tried to leave, the Air Force offered her greater opportunities that she couldn’t turn down, she says. She earned two master’s degrees through the Air Force and has held many positions, from academic instructor to chief systems engineer.

Today, this electrical engineer, who was deployed to Afghanistan as a Special Operations Forces Air Program Manager, serves as a program manager in the F-22 Program Office at Wright-Patterson Air Force Base in Ohio, helping to oversee the life cycle management of Air Force weapons systems. A mother of three young sons with a fourth child on the way, she married a fellow Air Force officer, and she enjoys keeping in touch with ROTC friends. She was promoted to lieutenant colonel on June 1, 2019. “I love my job,” Simmons says. “I really enjoy tackling challenging problems. I enjoy working on things that are helping our nation stay free.”