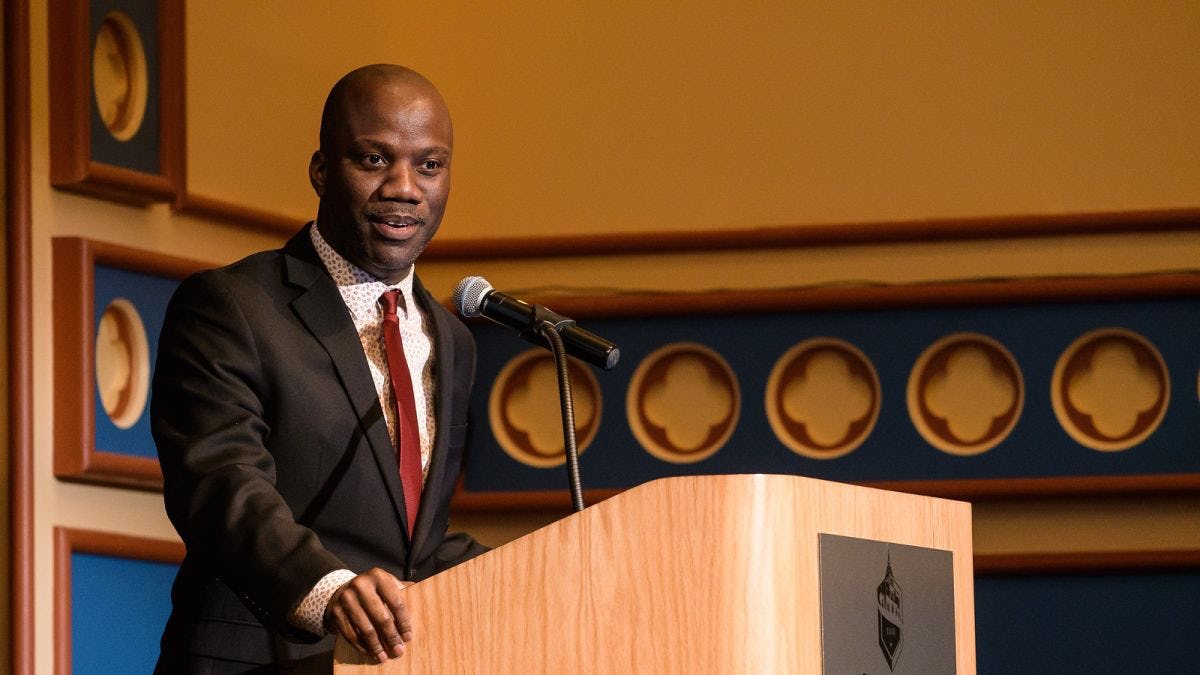 Shaun Harper, professor and executive director of the Center for the Study of Race & Equity in Education, at Stevens Institute of Technology

The quest for diversity and inclusion by institutions of higher learning must be about more than simply increasing the enrollment numbers of minority students on campus. How students are included in the college community once they get to campus is equally important. That was the central message Shaun Harper, professor and executive director of the Center for the Study of Race & Equity in Education at the University of Pennsylvania, delivered to the Stevens Institute of Technology community January 26.

The one-hour lecture, titled "In Pursuit of Excellence: Critical Perspectives on Racial Equity,” is part of Stevens’ Excellence Through Diversity Lecture Series, a new initiative designed to introduce ideas and perspectives to increase understanding of the value of diversity and enhance the university's efforts toward inclusive excellence in STEM.

Harper is one of the country’s foremost scholars on diversity and inclusion on college campuses. He founded the Center for the Study of Race and Equity in Education in 2011, and has authored more than 100 peer-reviewed journal articles and other academic publications on the topic, as well as 13 books, including the recent Race Matters in College. He was appointed to President Barack Obama’s My Brother’s Keeper advisory council in 2015, and recognized in Education Week as one of the 12 most influential professors in the field of education in 2016.

Harper's thought-provoking presentation to an audience of students, faculty and administrators at Stevens’ DeBaun Auditorium comes at a time during which college campuses across the country are experiencing a resurgence of activism around issues of racial justice.

In fact, Harper and his Center are often tapped by institutions during times of crisis. But waiting to respond after a campus incident or protest occurs is not the optimum approach, he said during the talk, advising colleges and universities to get ahead of potentially explosive situations by taking proactive, preventative measures that promote racial equality. Colleges that ignore or are in denial of the existence of racial inequities on campus run the risk of considerable damage to institutional reputation, he warned.

Harper commended the leadership of Stevens for creating a forum to engage in the national conversation around this issue, revealing that he took part in a “wonderful, animated” one-hour discussion with staff and faculty just prior to the formal lecture. He shared with the Stevens community some of the findings from a racial climate study he and his research team conducted over a ten-year period at 41 predominantly white college campuses that range in size, selectivity and institution type.

Survey responses from students of color – African Americans, Asian Americans, Latinos and Native Americans – offered a vivid snapshot of systemic challenges and disadvantages, such as differential treatment by faculty and advisors, faced by students of color in higher education. Racial microaggressions (subtle but offensive comments or actions directed at a minority or a member of a marginalized group), along with ethnic and gender stereotypes (including assumptions about affirmative action and women in STEM fields and classrooms) can, over time, impact students in dangerous and lasting ways, leading to anxiety, depression and lowered confidence, explained Harper.

Many students come to college from segregated environments, Harper continued, adding that for students of color, the campus environment can often lead to a form of social isolation. Black students and other students of color have described an acute sense of “onlyness” that comes from being the only student in the classroom belonging to a certain race or ethnicity, he says. Faculty of color in STEM fields relate similar experiences, he noted.

Harper’s message to institutional leaders: diversity cannot be reflected solely in the student body. Creating an inclusive, just and equitable campus environment for all students requires an institutional strategy.

Susan Metz, executive director of diversity and inclusion at Stevens, agrees with Harper.

"Central to Stevens’ core mission of educating outstanding students and addressing global challenges through research and innovation is offering an academic environment where everyone is fully engaged.  Our aim is to provide an exceptionally strong and positive educational experience for all students and Dr. Harper’s research informs programs, processes and a strategy that can benefit our community," she says.

To learn more about the Excellence Through Diversity Lecture Series at Stevens, including past lectures and speakers, visit stevens.edu/diversityseries.