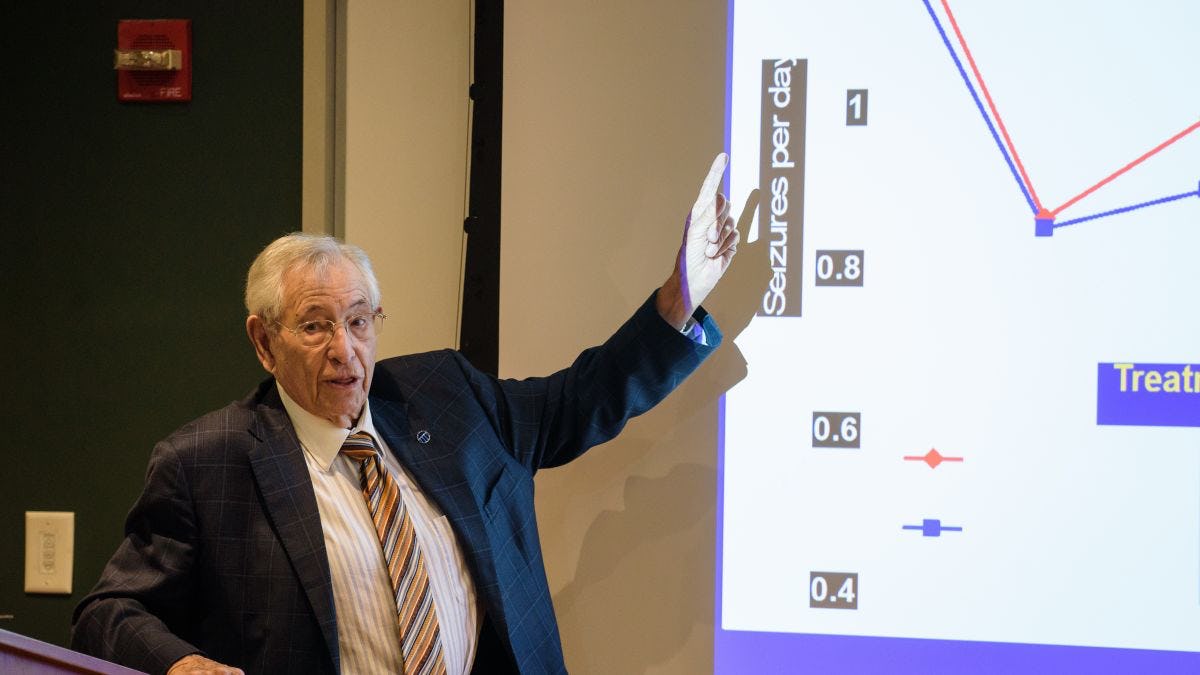 When Stevens Institute of Technology engineers see a problem they shouldn’t get stymied by it, according to prolific inventor Dr. Robert E. Fischell.

Instead, they should think "How can I use this great education, given to me by Stevens, to solve the problem and be an inventor?"

That encouraging advice was the theme of the inaugural SES Dean’s Lecture Series. Held on Wednesday, December 6 in Babbio Auditorium, Fischell discussed “Engineering to Benefit Humanity,” or how to use engineering skills and techniques to solve real-world problems. The topic drew interest from the entire Stevens community, with attendees from all schools filling the room.

Fischell, a prolific inventor with more than 200 patents to his name, uses his education to invent medical devices. To Fischell, problems "can create excellent opportunities for innovation," he told the packed room. Even when working with the FDA, "whose whole goal is to slow me down," he said.

Preventing Seizures at the Source

Fischell began his lecture by discussing the creation of Neuropace RNS, an epilepsy prevention medical device.

Two point three million Americans suffer more than one epileptic seizure per day and have no relief from medication and therapeutic treatments.

Fischell saw that problem, and designed Neuropace to solve it.

Neuropace is a neurostimulator, a one-inch by two-inch programmable digital computer with sensors that functions as a pacemaker for the brain. Once implanted, Neuropace recognizes the exact pattern of electrical signals that signal seizures and monitors their brain for that pattern. When it detects the pattern it stimulates the brain, stopping the seizure before clinical symptoms occur. 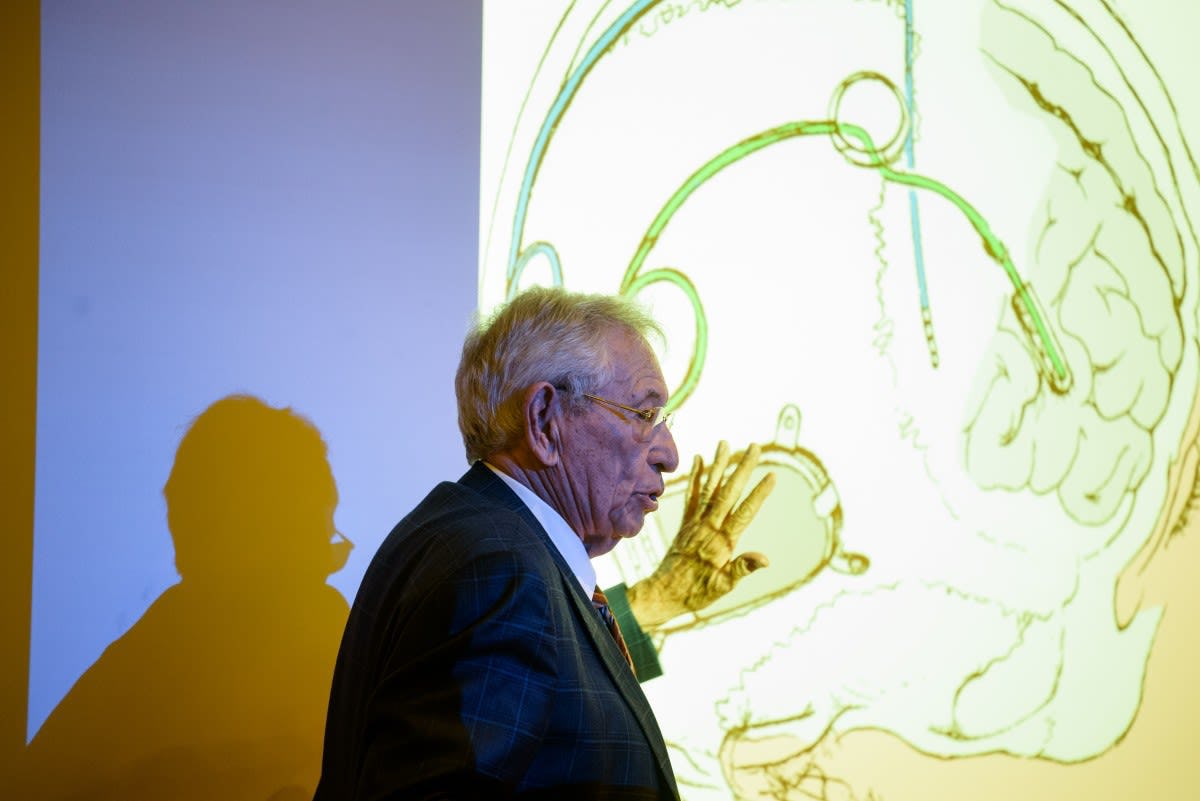 Neuropace provides electrical stimulation only when needed, turns off automatically and has minimal side effects ("as a matter of fact, we’ve found virtually none," Fischell clarified). Almost 70 percent of patients using Neuropace see permanent improvement over time. Best of all, over time Neuropace trains the brain not to have seizures at all.

And that’s after Fischell’s eight-year fight with the FDA.

"When we dealt with the FDA on this, we asked for an epileptologist to be on the review," Fischell said. The FDA refused, citing that it was a throat surgeon’s "turn," and putting him on the review instead. He looked at the panel’s unanimous approval and turned the device down, citing lack of proof "that the titanium metal won’t poison the person's brain—WHAT?!" Fischell exclaimed.

But, Fischell approached that problem by putting Neuropace through another round of testing which came back unanimously positive. Now, Neuropace is helping 20 million people in the United States.

Stopping Heart Attacks Before They Happen

Fischell then discussed the AngelMed Guardian System, an implant that detects heart attacks.

Heart attacks are the third highest cause of death in the United States. If they don’t end in death, patients are left with significantly weakened heart muscles. That’s particularly problematic for the 25 percent of patients who don’t experience symptoms.

Fischell saw that problem and realized that those patients needed a device to detect a heart attack and inform them to immediately seek medical help. He designed Guardian to do that. 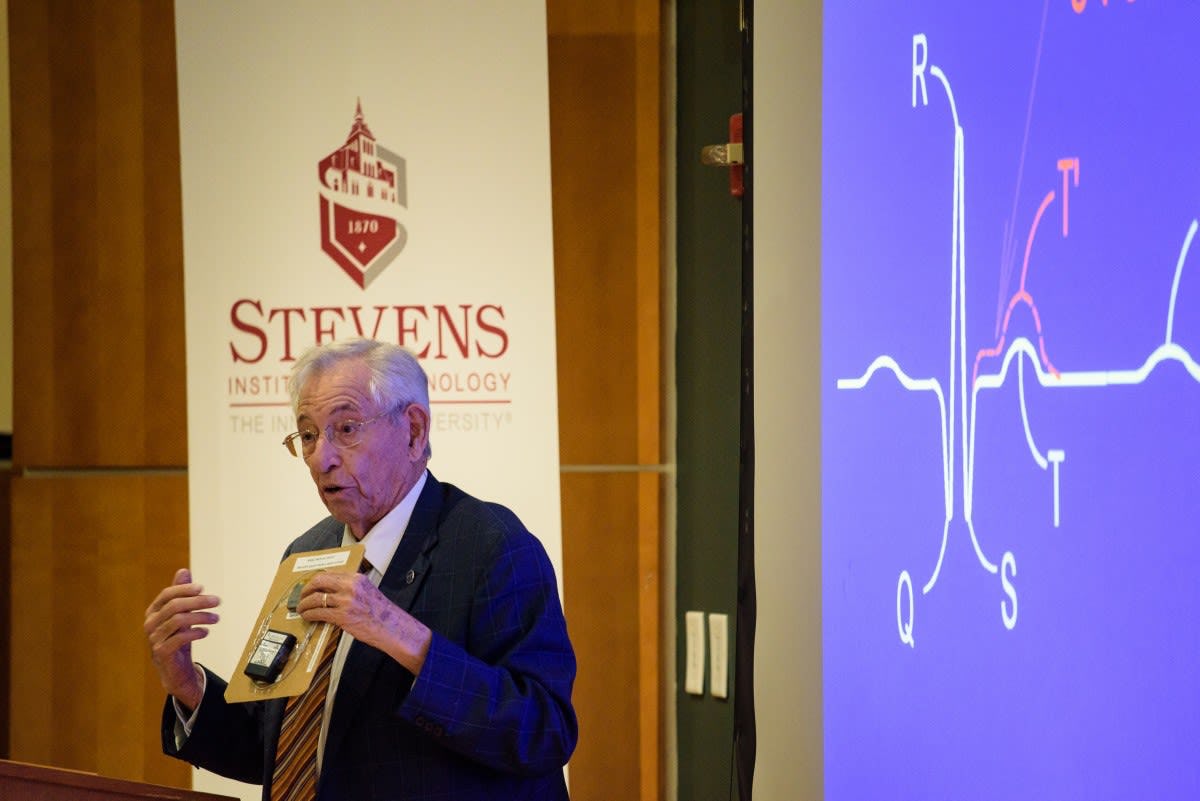 First, Fischell measured heart signals using internal electrograms to detect the exact electrical pattern signaling a heart attack. From those measurements, he tested and refined Guardian’s detection abilities in both pig hearts and humans before bringing it to the FDA for review.

Just like a pacemaker, Guardian is a monitoring device implanted under the skin, with an electronic sensor implanted into the heart muscle. When the sensor detects an electrical pattern signaling a heart attack, Guardian wirelessly alerts a pager-like device the patient carries with them. That tells the patient they’re having a heart attack and urges them to get medical treatment.

The average time between heart attack and treatment is six hours. The heart dies after six hours. Guardian cuts that to 30 minutes.

Part of Fischell’s success is due to his son, Dr. Tim Fischell, an interventional cardiologist who helped him test the device. "If you’re gonna be in the business of doing things in people’s hearts, it’s good to have a son who’s a cardiologist," Fischell advised. "That’s my advice to any of you wishing to do this."

Thirty six millions adults in the U.S. have migraines. More than 70 percent of them experience little relief from current treatment options.

Fischell saw that problem and created eNeura to solve it. 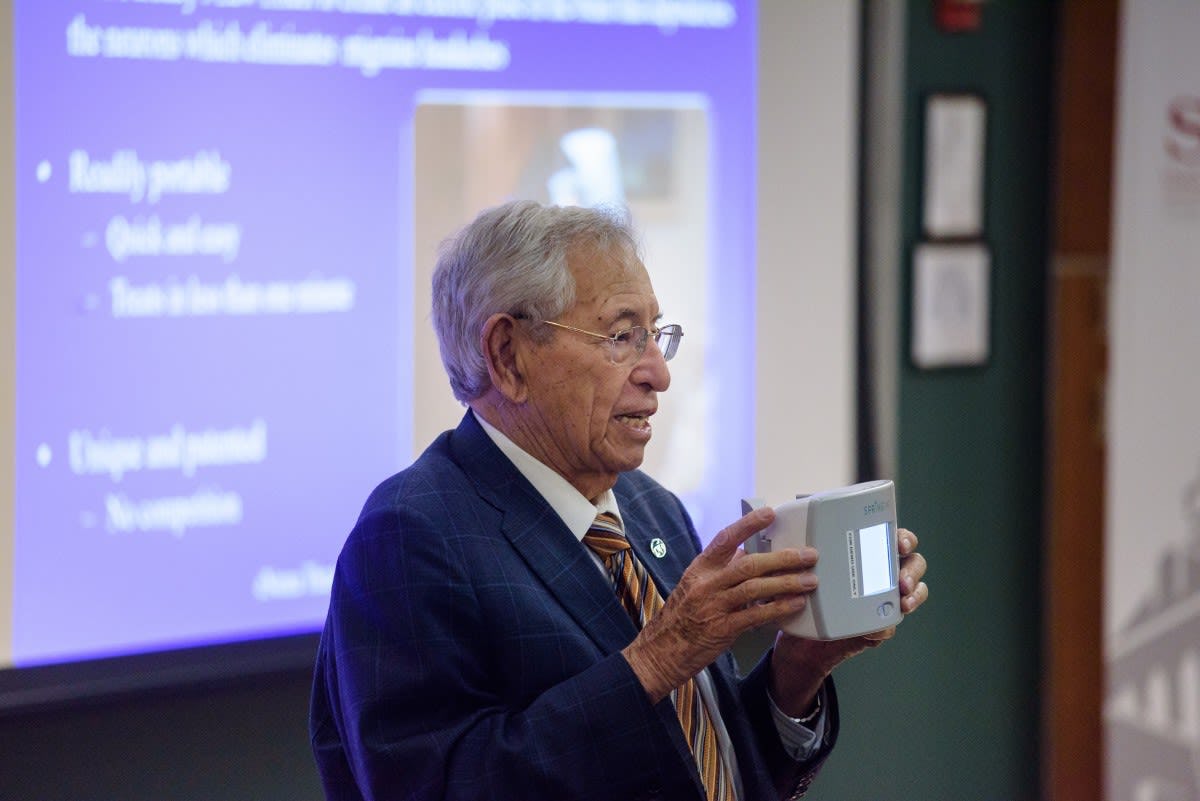 ENeura is a transcranial magnetic stimulator the size of a cheese grater. Housed in a plastic casing with large handles, a patient holds it on top of their heads and presses a button to self-administer safe magnetic pulses that stop migraines almost immediately.

"If you're a physicist, you'd know Faraday's Law, which says if I apply a magnetic pulse on salt water—that's your brains, by the way—it'll generate electric currents," Fischell said, "and the electric current in the brain can erase a migraine headache. That's what we have discovered."

"The brain itself has no neurons for pain," Fischell explained. "The only pain neurons are in the covering of the brain, the meninges. This device acts upon that."

Because the device acts so quickly, patients experience relief before accompanying symptoms like light-sensitivity, sound sensitivity and nausea can happen.

ENeura is the only non-invasive non-drug option proven effective at relieving migraines. It’s so effective in fact that, at his wife’s suggestion, Fischell used it to cure a cancer patient’s foot pain and is now revising the device to cure all human pain.

An "Unrelenting Desire to Overcome Obstacles"

While his life is testimony enough of education turned entrepreneur, Fischell added more specific advice for the Stevens crowd. "Give yourself the opportunity to get lucky," he said. "Problems can create excellent opportunities for innovation."

Fischell also pointed out that much of his success was due to hard work, and "the harder I work, the luckier I get." He emphasized that not following the path and creating a new path for others to follow often leads to the best discoveries.

Fischell even got philosophical, saying that the difference between what’s possible and impossible isn’t determined by anyone other than the inventor. "I would be a wealthy man today if I had a dollar for everyone who told me my ideas wouldn’t work," he said. In Fischell’s experience, the most important qualities an engineer can have are "perseverance and unrelenting desire to overcome obstacles," he said.

"Dr. Fischell has been an influential scientist and entrepreneur for many years and it was fascinating to hear him share the stories behind some of his many achievements,” said Dr. Christophe Pierre, provost and vice president for academic affairs at Stevens. “His long history of employing technology to improve lives aligns with Stevens’ focus on solving societal problems. I congratulate Dean Zu for bringing such a distinguished speaker to Stevens as part of her effort to build a world-class, prominent school of engineering and science." 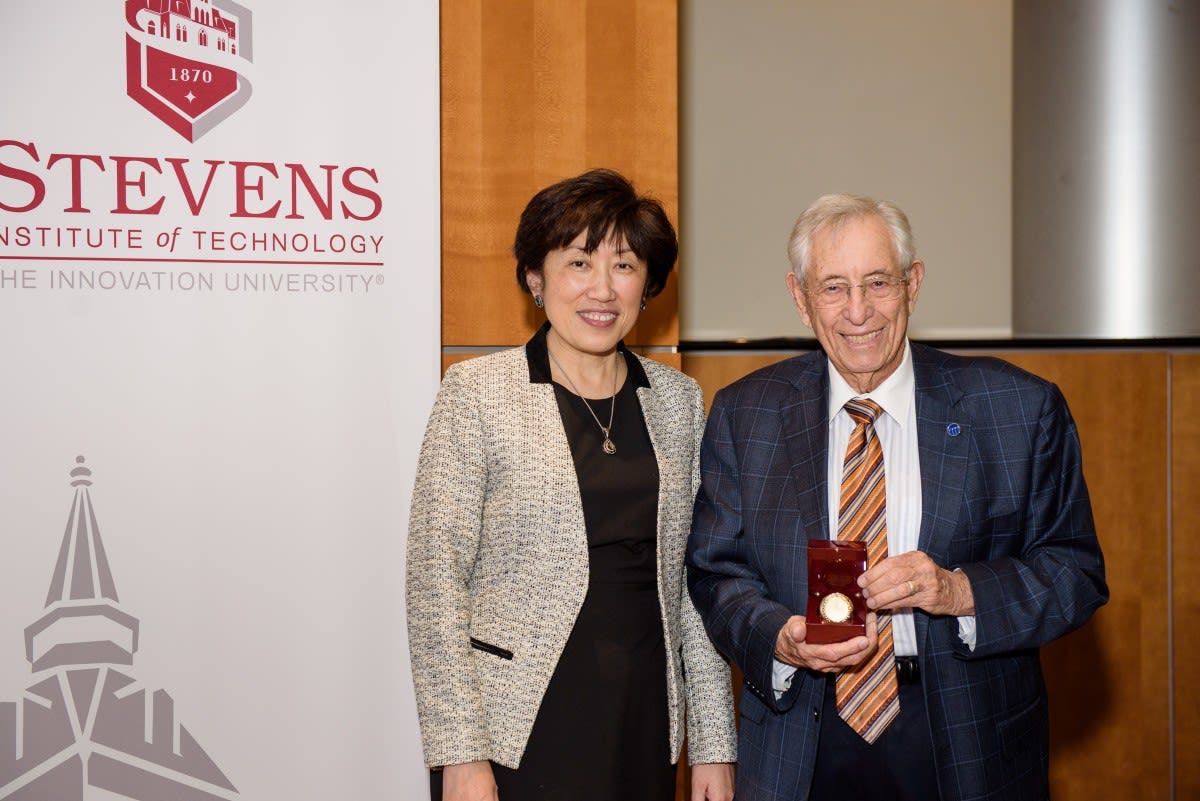