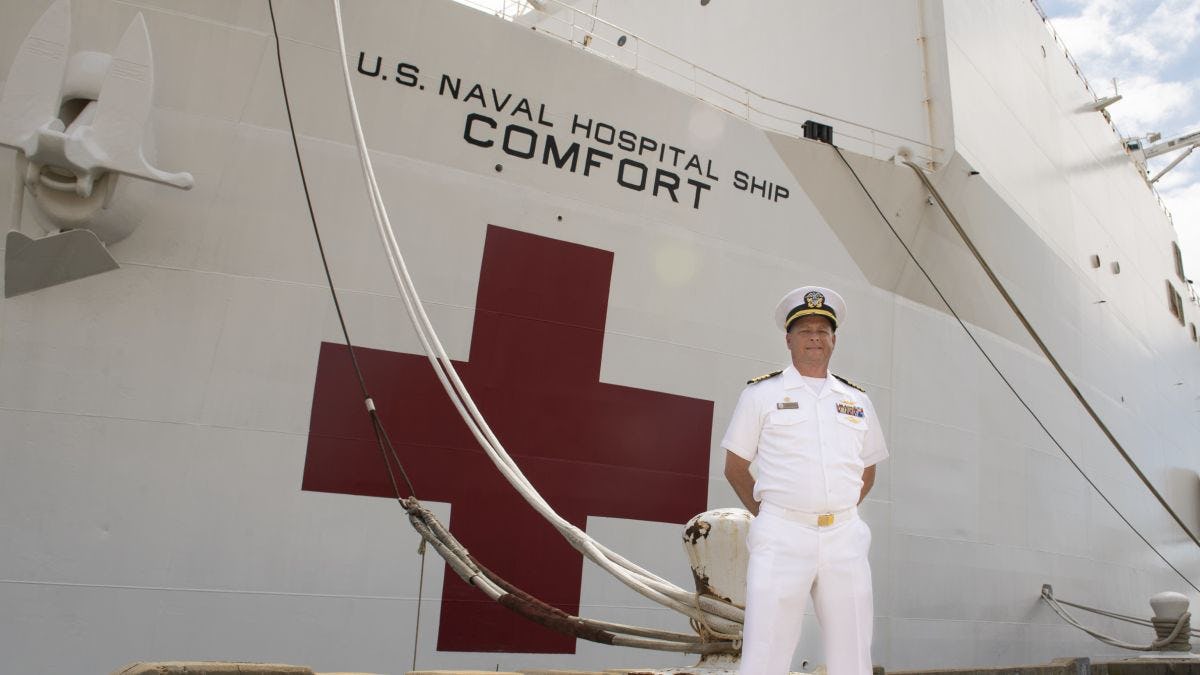 When the ten story-tall, three football field-long Navy medical vessel USNS Comfort pulled into New York Harbor and docked at Manhattan's Pier 90 on March 30 — on an urgent mission to support the city's response to the growing COVID-19 health crisis — one very interested observer in the Middle East stayed up late to watch it happen online.

Stevens Institute of Technology graduate and New Jersey native Capt. Kevin Buckley '89, an emergency doctor now posted as Fifth Fleet Surgeon in the Naval fleet's Bahrain headquarters, had commanded the ship's military treatment facility from 2017 through the summer of 2019 and knows every inch of its medical facilities like the back of his hand.

Comfort, he explains, has everything a modern hospital has — and more.

"The ship is crewed by more than 1,000 civilian mariners, medical professionals and support staff," he begins.

Designed for primary combat support, the main deck includes a 55-bed emergency room, four main X-ray machines, a CT scan facility and one of the largest blood banks in the world (capable of holding up to 5,000 units of blood); twelve operating rooms (ORs), one of which is an interventional radiology suite; a post-operative care unit; and four intensive care units (ICUs) with up to 100 ICU beds and ventilators.

"Its main goal is to support trauma patients," Buckley notes. "And then it has clinical support lines including physical therapy, dental suites with a dental lab, and an eyeglass lab."

Fifteen additional wards are also available on the main service deck, containing 900 non-urgent beds in bunkbed style, are available for sailors and soldiers in combat.

Then there's another entire huge deck for support services.

"There's a lab capable of nearly any test you can find at land-based facilities," he continues. "Four sterilizers to support resupplying the ORs. A galley serving 8,000 meals a day. A freshwater-making plant capable of producing 300,000 gallons of fresh water a day from sea water. A fully stocked pharmacy." 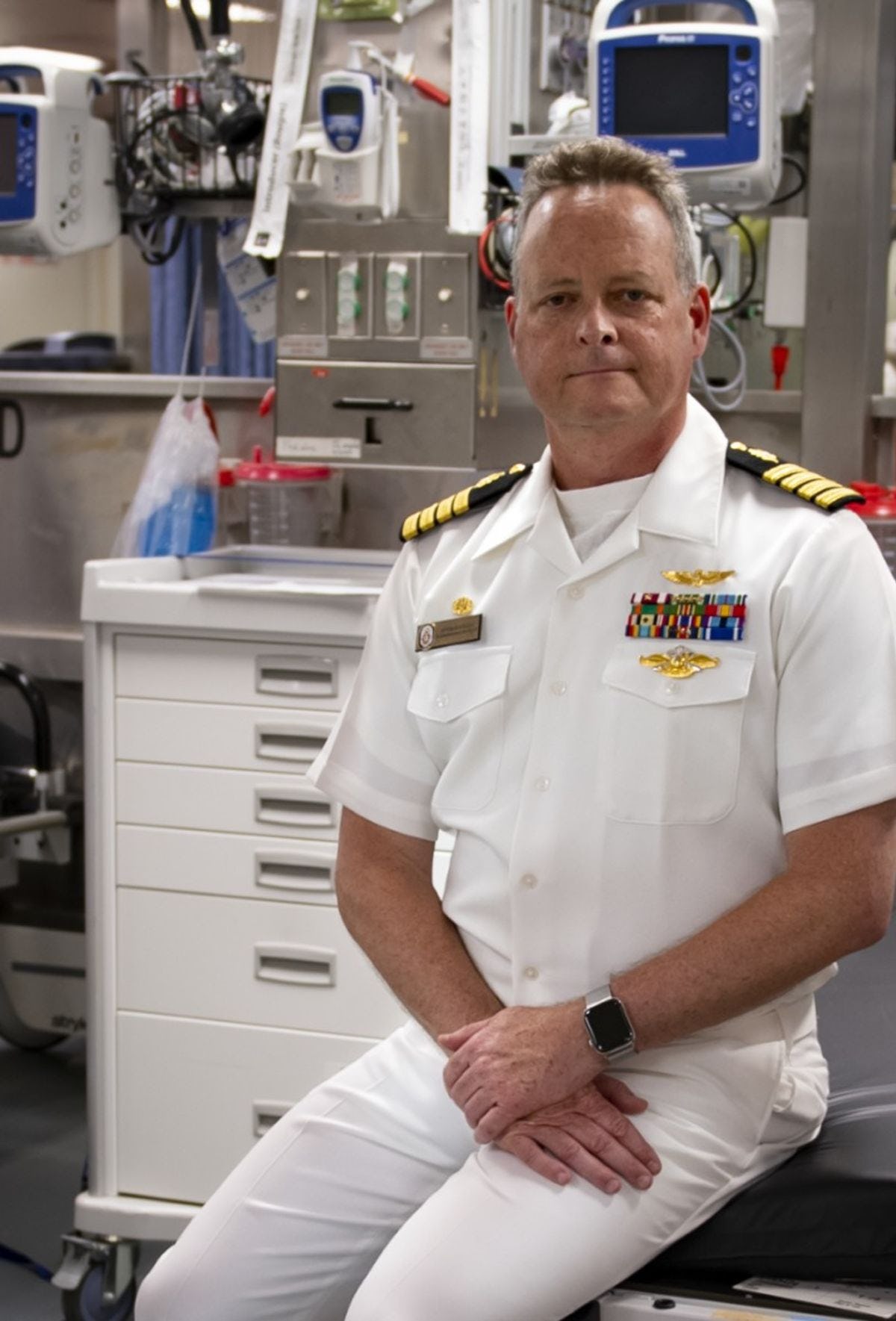 Comfort even has its own oxygen-producing capability, distributed throughout the ship to the ORs, ER and ICUs.

For the New York City medical mission, the ship's combat-ready package will be modified somewhat.

"There can be up to 1,000 beds on board," explains Buckley. "However, this is not combat. The ship has often been used in mission sets for disaster or humanitarian support, with a different mix of capabilities."

The biggest plus, he adds, is the addition of ICU capacity to the city's healthcare infrastructure.

"Typically they can take 80 patients total in the ship's ICU wards, but there is at least 20% additional capacity there, depending on the staffing and mission," he says.

Doctors on the ship do rounds just as they do in a hospital, adds Buckley, who as a commanding officer walked the ship constantly, checking for updates on individual patients and staff, day and night.

"My job was to allow them to do their jobs, to look in their eyes and see what's going on in the moment," he recalls. "I would go to the crew and ask, 'what can I do to help you?' or 'What do you need?' And then I'd try to make it happen, remove any barriers to providing world-class care."

"And they would save lives, lives that were very difficult to save at the time, or make life-impacting moments."

Saving lives, in combat and peacetime

The converted oil tanker — which carries enough fuel to sail around the world one and a half times, and is stable enough to allow surgeries to continue during 25-foot-high seas — has led a colorful life.

Its crews supported wounded troops during the 1990 Gulf War; sailed immediately to New York on Sept. 11, 2001 to stand ready to treat survivors; headed to Louisiana to support Hurricane Katrina recovery efforts in 2005; and supported the ongoing humanitarian mission Continuing Promise to Central and South America.

The vessel then nearly lost its commission. But it sailed to Puerto Rico, with the hospital under Buckley's command, in 2017 to assist Americans in the wake of Hurricane Maria after that storm cut power to the entire island and devastated its healthcare infrastructure.

Though he changed command in 2019, he remembers many highlights.

"Giving a man who had been blind for 15 years the gift of sight again; making glasses for children who had never seen clearly, and watching their personalities change instantly; watching a pediatric ophthalmology specialist tell the mother of a premature, two-month-old her child was not blind (as she had been told at birth)," he recalls. "We became one of the world's largest hospitals, a beacon of hope."

Buckley also gave tours to ambassadors and host nations' leadership, in addition to the White House personnel, Congressional staff representatives and military who visited — including Vice President Mike Pence, who saw the team off in Miami in 2019.

"Those three missions, I think, proved the ship's worth to everyone," says Buckley, who estimates his team oversaw care to more than 100,000 in all during the three missions he led or began. "Paraphrasing one of my staff from the Enduring Promise mission in 2018: 'We don't care where you're from — we just want to know where it hurts.' "

Now, says Buckley, America is engaged in a different sort of war against nearly invisible warriors.

"We have some of America’s best and brightest sons and daughters on the front lines of the war against this virus," he notes, "helping our fellow Americans as this ship — and its sister ship the USNS Mercy — maintain readiness to assist."

As Comfort joins this battle, Buckley is confident his former crew will make a significant difference.

"I'm incredibly proud of the ship's men and women," concludes the one-time Stevens chemical biology major and Tufts University medical student. "They are the heroes."