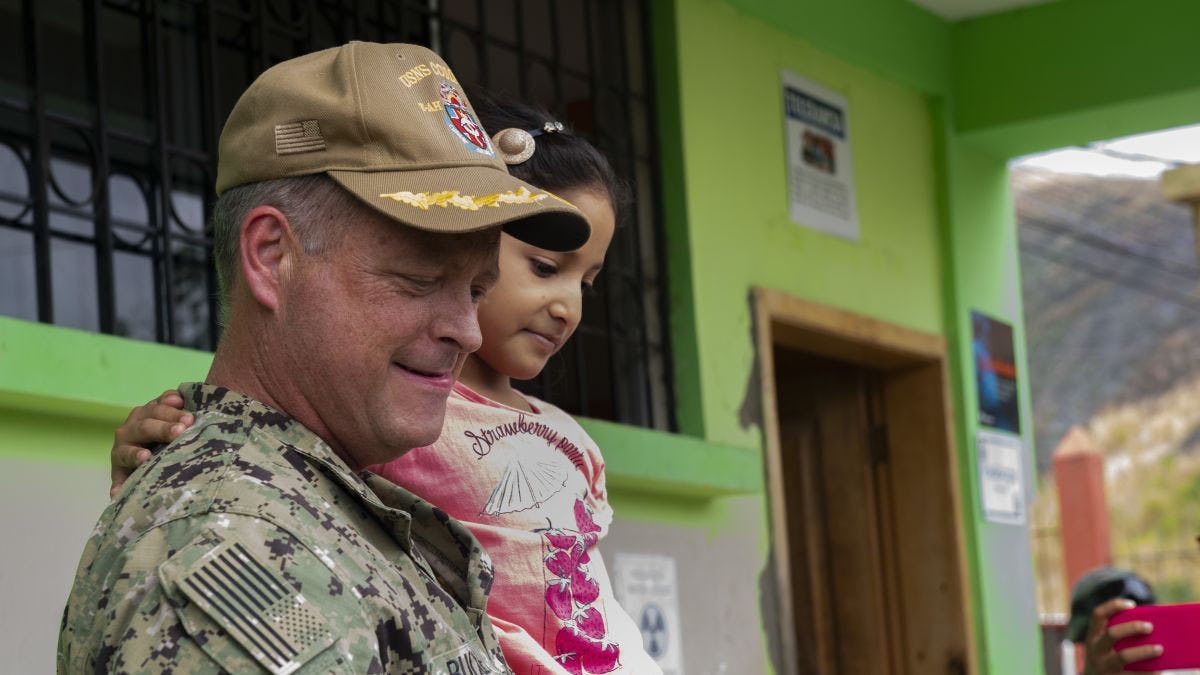 As many Americans celebrated the Fourth of July this summer with barbecues and a long holiday weekend with family and friends, Navy Captain Kevin Buckley ’89 sailed off the coast of South America on a mission of mercy.

Migrants from Venezuela fleeing political and economic chaos in their country are overwhelming medical systems in several countries in the region and that’s where Buckley, an emergency medicine doctor, and his team come in, with their mission aboard the USNS Comfort. As commanding officer of the medical treatment facility on this Navy hospital ship, Buckley led about 320 medical professionals, in addition to his staff of more than 800 on ship, that came to treat patients and relieve pressure on national medical systems in the region. On their first stop, completed on July 3 in Ecuador, they cared for, astonishingly, 7,799 patients and performed 120 surgeries — in just six days. His medical staff — military and civilian personnel from the U.S. and six other countries — are providing free medical care to people displaced by the migrant crisis but also to people in need. Buckley quickly points out that anyone battling poverty — and there are many in this area of the world — can come aboard and receive care.

As in past Comfort missions he’s led, it’s often the simple procedures that change lives: cataract surgery for the visually impaired grandmother who needed constant family supervision and can now live independently, freeing family members to work; children receiving eyeglasses for the first time and seeing their ability to learn soar; mothers receiving post-natal care that most Americans take for granted. “We don’t care where you’re from,” Buckley says, emphatically. “Medicine is the safe place. We want to know where it hurts...we are just here to help anyone in need.”

This was actually Comfort’s second mission to Central and South America in less than a year. Buckley also led an 11-week mission to the region in fall 2018, launched to relieve pressure on the region’s medical systems caused partly by cross-border migration. That time, his team treated 26,700 patients and performed 599 surgeries, with stops in Ecuador, Peru, Colombia and Honduras. Reached via email in mid-July, Buckley, who has been to 40 countries over his 26-year Navy career, reflected that he’s helped to treat some 45,000 patients alone during his two-year tour with Comfort, affecting 45,000 families.

“We are neighbors helping neighbors, no matter where you are from or why,” he wrote. In early June, several days before Comfort’s departure from Norfolk, Buckley anticipated serving patients both on ship for low-risk surgeries like hernia and cataract surgeries and in land-based clinics that will do basic medical evaluations, preventive medicine, dental treatments and optometry screenings, among others.

But his two-year appointment as Comfort’s commander was up in late July, and he left the ship on July 20 after its stop in Costa Rica to report for his next assignment: the Kingdom of Bahrain, where he will serve as the 5th Fleet Surgeon and medical advisor to a three-star admiral and his staff in the Persian Gulf. In his Change of Command speech to his crew, Buckley remembered the 45,000 patients served, from the boy with the severe knee infection whose leg was saved to the Venezuelan migrant with the long-term lower leg fracture who could finally walk after a tibia nail placement. He was full of gratitude for his fellow service members and the extraordinary team effort aboard Comfort that made these patients’ lives and the lives of their families better.

“I have met sailors that joined Comfort because this ship or its sister ship came to their country when they were a child; they came to America to be part of this type of mission,” he said. “Lessons you learn and your experiences will shape you and multiply the impact of those 45,000 families to possibly millions of people. You are and represent the finest of human qualities making a difference.” In a phone interview just several days before departing for his last Comfort mission in June, Buckley reflected on his long Navy career. His new appointment to Bahrain is a new challenge but also an opportunity to be closer — just a one-hour time difference and a quick plane ride — to his wife and their 12-year-old daughter in Sicily.

But Comfort was top on his mind, and he was quietly confident and refreshingly down-to-earth. (“I’m a Jersey guy,” he says.) His very long and impressive bio can hardly capture decades of accomplishments during his military career, with many years of caring for patients and in medical leadership roles from Guam to Spain, from Italy to Iraq and San Diego, to Central Africa and Guantanamo Bay, Cuba. With Comfort, Buckley served as the head doctor on this ship that includes 12 operating rooms and more than 1,000 personnel on board. While its primary mission is supporting the military fighter, Comfort also provides disaster relief and humanitarian relief. It is a teaching hospital, and while his job is to keep this complex medical facility operating, Buckley says that he particularly enjoys teaching residents.

“In that role, I can make a bigger impact,” he says. “My job is to help the people coming behind me.”

Buckley was often the face of this ship, in his Navy whites, helping to lead tours of Comfort for Vice President Mike Pence this past June in Miami, at the start of its mission, and for the U.S. Ambassador in Ecuador and other health ministry officials in host countries. But, when you see him in photos, Buckley truly looks most comfortable in his military fatigues, in the heart of a mission, holding an infant who couldn’t be more than two months old or smiling and carrying a young girl who had just received care aboard Comfort.

The best way to talk about these missions, he says, is to remember the people who sought help.

There was the 19-month-old whose family was convinced she was blind and who, with simple cataract surgery, clearly saw her mother for the first time. Or the 94-year-old man who never saw a doctor in his life, and the kids who couldn’t read because they needed glasses. On the last mission, they distributed 20,000 pairs.

“Siblings can see each other, and their personalities change,” Buckley says. There was a boy who had six fingers and just wanted to be able to wear a baseball mitt. Or the man with a hernia the size of a basketball who held it in with a board so he could work to support his family. With simple surgeries, they walked off the ship, their lives changed.

His own life-changing event led Buckley, who grew up in Belleville and Livingston, New Jersey, to commit to a medical career. His mother suffered a heart attack when he was a child, and he watched the medical team come together to save her life that day. His determination to become a doctor was set.

He never planned for a military career, but the Navy offered to pay for medical school at Tufts University, and he was determined not to incur any debt. At Stevens, he worked in the lab with former chemical biology professor Donald DeWitt, a role model for how he would one day aspire to teach young doctors: patient, really taking the time to talk to his students.

“I loved my time there,” he says of Castle Point. “It got me where I wanted to go. I felt very prepared.” Buckley attended his 30th class reunion this summer — his first time back on campus since graduation — and still keeps in touch with several classmates.

Over his long career, one of his earliest and most memorable assignments was in Guam, where he was stationed at the U.S. Naval Hospital as head of the Emergency Department. Some 13,000 miles from home, he met his wife, Jamie, a teacher and fellow New Jerseyan. Guam would always hold a special place in his heart, he says — from meeting his wife to the many sick people he and his team helped to the village visits with tribal chiefs and the 500 scuba dives he completed.

Many other naval hospital assignments followed: in Rota, Spain, where he held important leadership positions as director of EMS, director of the Space Shuttle Launch Support Team and medical director for PreHospital Trauma Life Support for Armed Services Europe; director for medical services at the Naval Hospital in Sigonella, Italy; and as senior medical officer and faculty at Naval Medical Center, San Diego.

Buckley has also been deployed several times during his career, including as officer in charge of a surgical team to support anti-terrorism efforts in Central Africa and, in 2008, to Iraq. Buckley was the senior emergency medicine doctor and Officer in Charge of the Shock Trauma Platoon, a mobile emergency and operating room, in Al Taqaddum and Rawah, Iraq. “You get to the injured quickly in the golden hour,” he says. “It made a big difference.” Responding very successfully during the “golden hour’’ — the time from when a traumatic injury occurs and the medical response that can mean the difference between life and death — his group had a patient survival rate of 85%.

Throughout his service to his country, Buckley has met people and patients on what is often the best and worst days of their lives. But when he is asked about the stress of his work, he immediately identifies the greatest sacrifice (though he doesn’t use the word sacrifice) — time spent away from his family.

Both of his parents died when he was on a mission, he says. He and his fellow service members miss milestones for their children and siblings.

“There’s a cost; an emotional cost,” he says. This late Saturday afternoon, as he speaks by phone from Normore planning for his upcoming mission, as his wife and daughter are 4,800 miles away in Sicily. His next assignment in Bahrain brings him four years from retirement, and he says that it is time soon to no longer be separated from his family.

But they have lived abroad and traveled extensively around the world, and Buckley sees a richness of experience there that has made a Navy career so attractive.

“It’s more exposure to people in the world, a more global view,” he says. “These opportunities keep me in.”

And there is the work. During Comfort’s mission to Puerto Rico in the aftermath of Hurricane Maria in 2017, Buckley recalls a 21-year-old new mother suffering from post-partum pancreatitis that was untreated for several months and so severe that it was uncertain she would survive. But after receiving care on Comfort, she walked off the ship eight days later to her husband and baby.