Music to His Ears 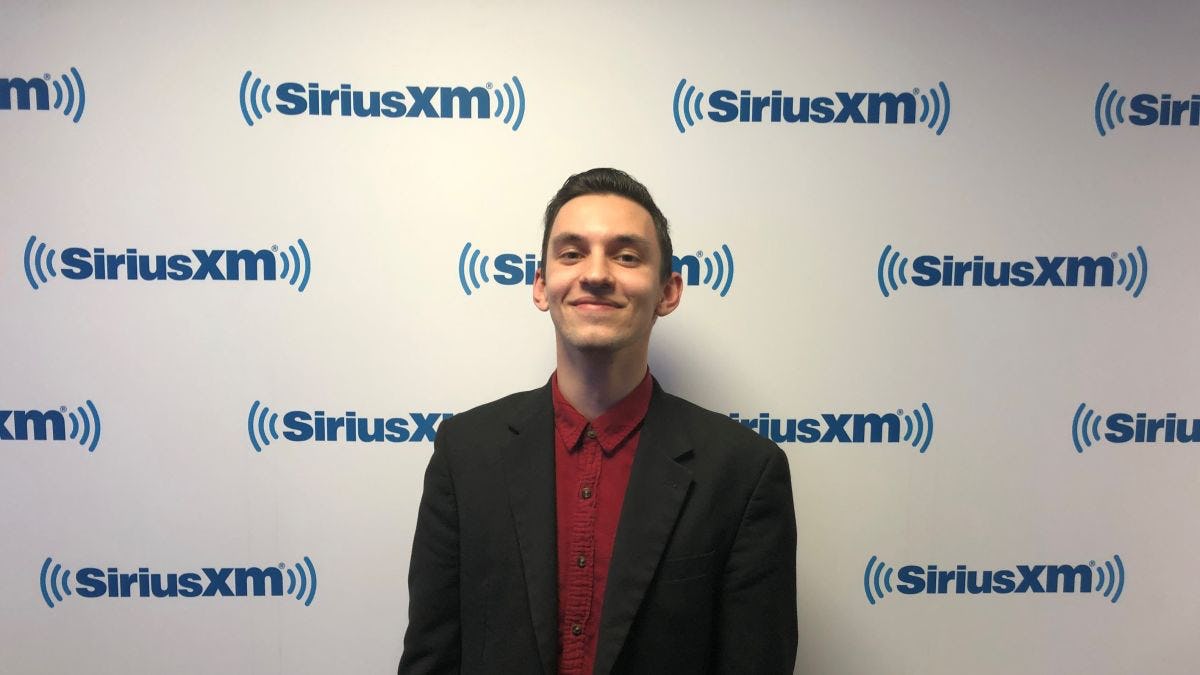 Imagine compiling an entire discography of pop icon George Michael – from Wham! to his solo career – for a radio popup channel. Or getting to see megastars like Taylor Swift walking down the hallway at work as a normal part of your day.

The music and technology major from Westchester County, New York was able to experience that and more as a music programming intern at SiriusXM last fall.

“I loved every minute of my time at Sirius.”

The feeling must have been mutual. Sirius invited Chiola back for a second internship this spring.

Assigned to the music library at Sirius, Chiola found himself in a unique position.

Working in the music library meant that Chiola was heavily involved in channel development.

“Somebody comes up with an idea for a channel builder. And what we’ll do is take every song that an artist has written, been featured on, etc., and take that and build a channel around that. People were going nuts on Twitter for the George Michael popup channel that we did.”

Chiola, a self-described “classical music nut,” came to Stevens wanting to become a composer. But exposure to the audio side of the music and technology program led Chiola to apply for and succeed in landing the coveted internship at Sirius.

“It was the faculty that initially drew me to Stevens. There are a lot of established people on the faculty who teach in a way that is both theoretical and relevant, that I really wanted to learn from. And I did. I always knew I would get a great education no matter what I pursued.”

Another factor in Stevens’ favor was its close proximity to New York City, an entertainment capital and hub for the music industry.

“Not only can you catch live performances in the city, whether at a jazz club or the New York Philharmonic, you’re close to a lot of internship opportunities,” Chiola says, citing his easy access to Sirius’ office in midtown Manhattan from the Stevens campus.

In addition to working with all the stations at Sirius, Chiola said working in the music library helped expand his knowledge of music beyond the U.S.

“I gained exposure to other music cultures by looking into different demographics of people that listen to different types of music. At the same time, I’ve noticed that there was a movement toward a lot of fusion and incorporation of music from other cultures here in the U.S. People are starting to spread out and love all types of music.”

At Sirius, Chiola made a name for himself as someone at ease with technology, a common trait among music and technology students at Stevens.

“I was known as 'the Pro Tools guy.' It’s the encoding software that I used to convert vinyl into a digital format. I did an entire Frank Sinatra four-part album by myself. I love that music. So it was a lot of fun.”

As Chiola again juggles classes and his internship at Sirius this spring, there are new projects on and off campus that he is eager to dive into.

As part of his degree requirement in music and technology, Chiola is already thinking about his senior sound design project, where students select seven minutes of an existing film, strip it of all of its sound properties and record fully over it with new and original sound effects and music.

“I remember when I was on the music and tech tour and they played someone’s project for us and thinking, ‘Wow, that will be me if I get into this program. So I’ve been excited to do that for a long time.'”

At Sirius, Chiola is looking forward to exploring other satellite areas of the music library position this spring.

“I’m looking forward to gaining exposure to the soundboard technology and the studios where the artists interview. I’m just excited to see what else is new, because they’re constantly churning out ideas. I wake up every day getting paid to do something that I enjoy.”

After graduation, Chiola says he hopes to end up at a large-scale entertainment company like SiriusXM or Walt Disney “behind the board” engineering or mixing.

“Being a visual arts minor, I would love to be able to pair my music and technology background with motion graphics or video. People I know that work in entertainment usually wear many hats. Since the world of entertainment is so broad, I would honestly enjoy anything with an inkling of creativity that contributes to the final product.”