Let the Recycling Games Begin! Stevens is Ready for RecycleMania 2019 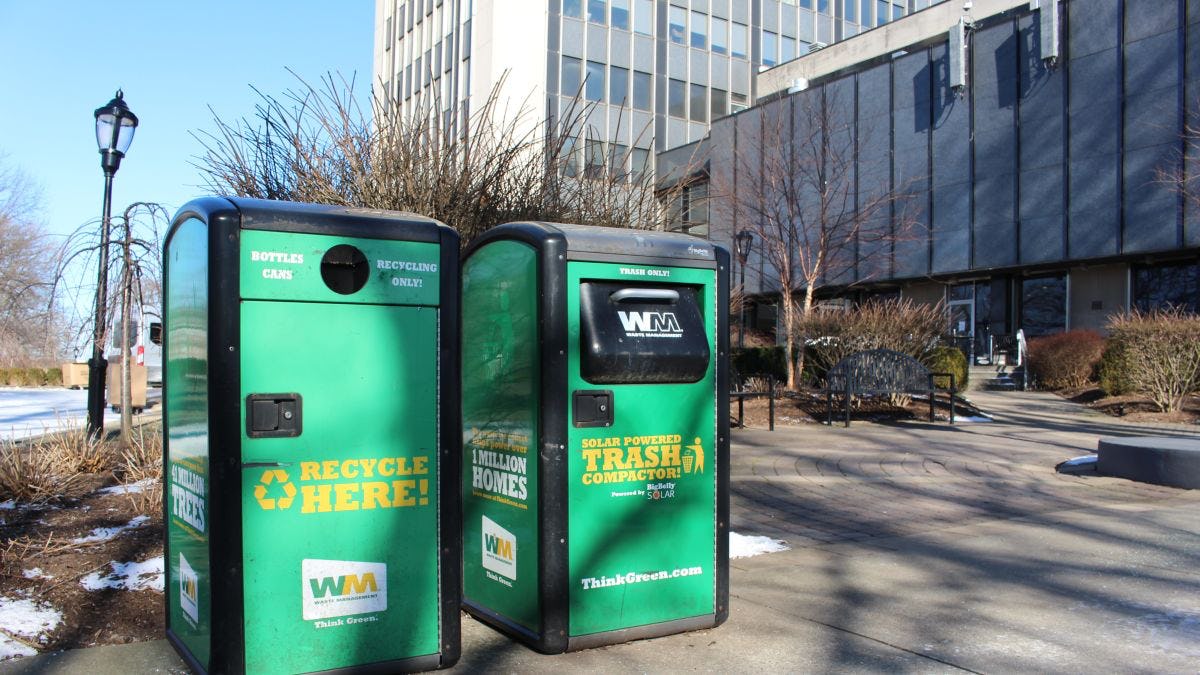 Solar trash compactors outside the Wesley J. Howe Center on the campus of Stevens Institute of Technology

In the battle for green bragging rights, Stevens Institute of Technology will have a chance to flex its recycling muscles when the eight-week competition known as RecycleMania begins Sunday. From February 3 to March 30, Stevens will compete against hundreds of colleges and universities across the U.S. and Canada in tracking how much trash it collects and recycles.

During the two-month tournament, Stevens will compete in two categories: Diversion, which measures how much trash, recyclables (paper, cardboard and cans and bottles) and food waste they divert from landfills; and Per Capita Classic, which looks at who collects the largest combined amount of paper, cardboard and bottles and cans on a per person basis.

The competition provides an opportunity for the university to showcase its campus-wide recycling program, which includes:

A leaderboard for each category will be displayed on the RecycleMania website based on the weights of recyclables and trash reported weekly by the participating schools.

The ability to track the university’s performance against other schools during the competition will help motivate the Stevens community to reduce waste and recycle more, says Leo Pedraza, assistant dean of students and director of student life at Stevens.

“I know it’s a friendly competition, but our students are competitive by nature and will want to see the school do well once they know Stevens is participating. In the coming weeks, students groups such as Engineers Without Borders (EWB), Stevens Environmental Engineering Professional Society (SEEPS) and Sustainability Activism, Volunteering and Engineering (SAVE) are looking to host promotional and educational events in order to rally the campus community behind this effort,” Pedraza said.

The winner of each of the tournament’s categories will be announced April 16.

RecycleMania, which began in 2001 as a challenge between Ohio University and Miami University to motivate students to recycle more, has grown dramatically over the years. Since 2001, more than 1,000 colleges and universities from 46 U.S. states, the District of Columbia and Canada have participated. RecycleMania, which is managed by the National Wildlife Federation Program, is supported by the EPA's WasteWise program and sponsored by a number of major corporations.

Stevens’ participation in RecycleMania is just one of several local and nationwide activities that advance the university’s sustainability goals. Stevens belongs to or participates in:

Additionally, the university has installed five electric vehicle charging stations on campus with funding from the New Jersey Department of Environmental Protection, is transitioning to a green fleet of vehicles to replace inefficient gas-powered vehicles, and is pursuing sustainability certification for new building projects pursuant to the Leadership in Energy and Environmental Design (“LEED”) program, the foremost green building rating system developed by the U.S. Green Building Council.

“Stevens students are proud supporters of many sustainability initiatives, which makes me certain that our campus has an edge in this competition. RecycleMania is the perfect vehicle for us to ‘walk the talk’ and have our shared commitment and passion match our behavior. Not only is this competition a great way to showcase our campus to the broader public, it’s also a wonderful way to remind ourselves of the importance of recycling year-round,” said Sara Klein, assistant vice president for student affairs at Stevens.