“I realized retirement isn’t for me.” 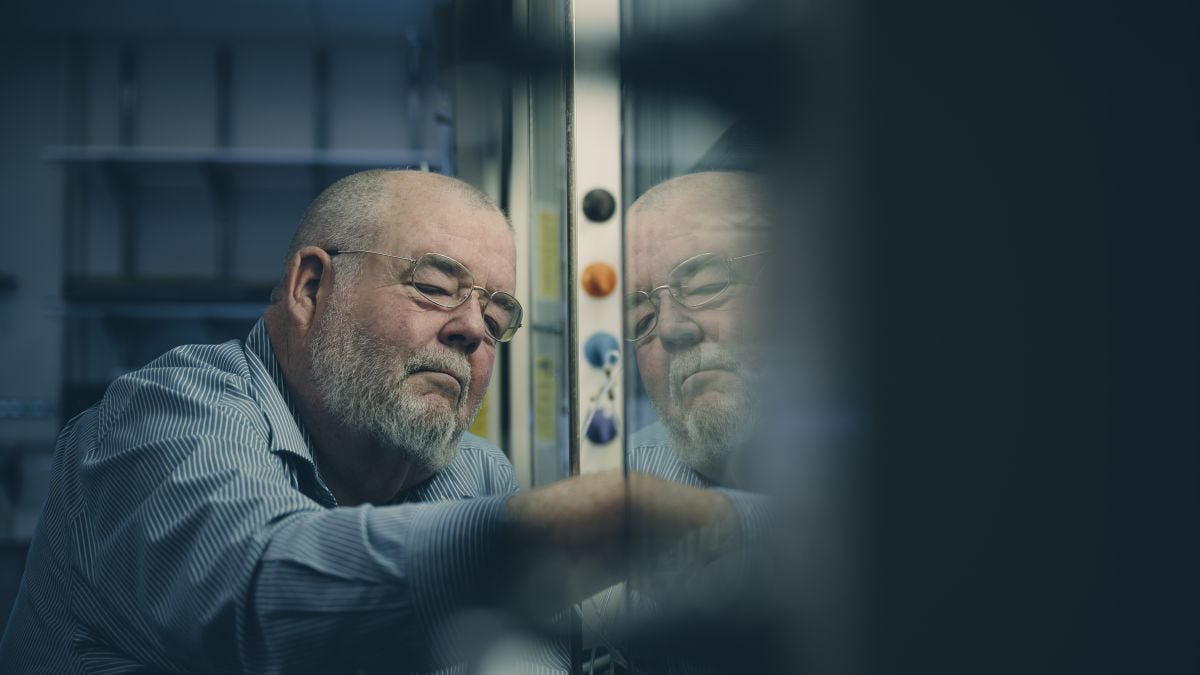 Mike McGuire ’78 came out of retirement to take on an important mission — improving the availability of life-saving generic drugs in the United States.

Mike McGuire ’78 spent more than three decades with Smith, Kline and French (later GlaxoSmithKline), first “at the bench” in the chemistry lab, rising to manager and company expert. Over 14 years, he led a big team — working in the lab himself — to develop Votrient, a drug still used today to extend the lives of patients with kidney cancer.

When The Stevens Indicator alumni magazine met McGuire during a Zoom call on St. Patrick’s Day earlier this year, he was wearing his green — bright green t-shirt, shamrock ball cap. He’s a talker and a good storyteller. And he’s a family man; he and his wife have four children and a granddaughter. A few years back, he shared a family portrait with The Indicator: the McGuire clan dressed in matching Philadelphia Eagles hats for their Christmas photo. 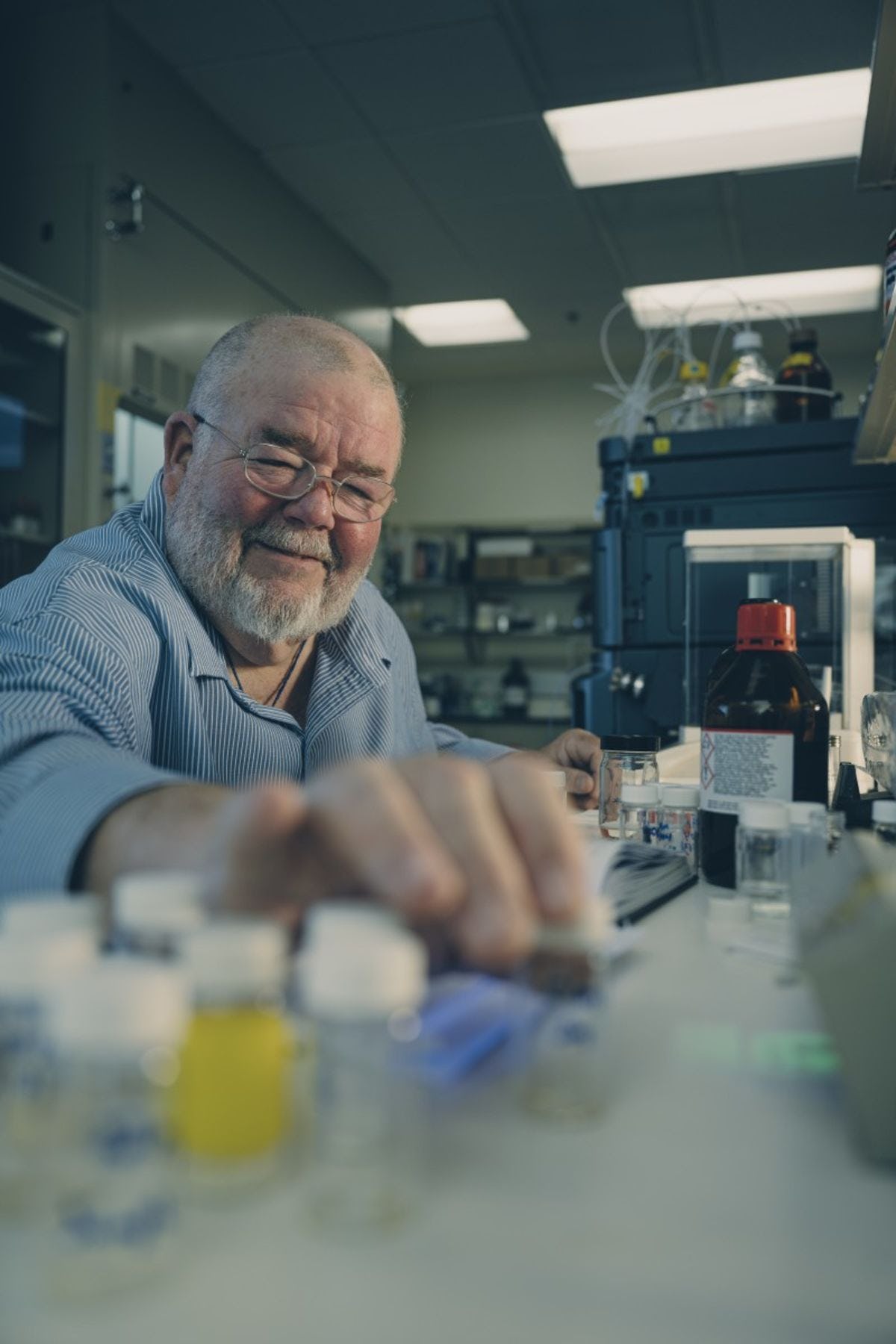 Mike McGuire ’78 in the lab at Continuity Pharma, where he is director of continuous manufacturing.

After 36 years with Big Pharma, it seems retirement would make sense for this family man. He tried for about six months, and it didn’t take. A fervent love of his work, a restlessness, a pull to address a long-simmering healthcare issue — now worsened by the pandemic — brought him back into the chemistry lab. The fact that he hadn’t worked in a lab in 15 years made him a little nervous. “But it turns out, your hands never forget,” McGuire says. “I mean, I had 30 years of being an organic chemist; you just reach naturally for what you need to have, and you don’t forget it. You have a memory.”

In October 2020, McGuire and his wife Mary moved 700 miles across the country to an apartment in West Lafayette, Indiana, so he could take a job in “small pharma”: with Continuity Pharma, LLC. The four-person start-up — with lab space on the campus of Purdue University, as part of its incubator program — has a big mission: to manufacture important generic drugs that are in short supply in the U.S.

“Our mission is to democratize the production of generic drugs and to help bring the manufacture of drugs back to the United States,” McGuire says.

The company is currently working under a grant from the Defense Advanced Research Projects Agency (DARPA) to develop “continuous routes” to manufacture generic drugs through simple machinery and processes that require less infrastructure but can produce a significant quantity of drugs quickly, safely and more cleanly.

More than 90 percent of generic drugs in the U.S. are actually manufactured abroad, McGuire says. Supply chain problems caused by the pandemic can put people’s lives at risk as they depend on these life-saving medicines, he says.

“The pandemic showed me that we’re really in big trouble in the United States because our supply lines or supply chains are so weak and so dependent upon foreign suppliers,” he says. COVID-19 also showed McGuire — who splits his time between West Lafayette and his home base in West Norriton, Pennsylvania — that he needs to continue to work in chemistry.

The startup is a new challenge, but McGuire is actually going back to his roots of inventing new chemistry. During the pandemic, the U.S. government identified about 100 drugs that are in short supply, McGuire says. Currently, under the DARPA grant, Continuity is focused on several drugs in the benzodiazepine class that treat anxiety, panic attacks, seizures, alcohol withdrawal, and are used in the operating room. His group is also working on a brain cancer drug.

Continuity, which was founded in 2018, aims to produce a machine — a flow reactor — that can make several different drugs of the same class in a simple and clean manner. This type of manufacturing differs from large pharmaceutical companies, which use 1,000-gallon reactors and huge plants and suppliers across the world, McGuire says. The long-term hope is that Continuity’s success would inspire the creation of dozens of other small companies in the U.S. manufacturing high-quality drugs.

McGuire, who serves as director of continuous manufacturing, says that early results are promising.

“We have a good working prototype for certain drugs,” McGuire explains. “... For some of the benzodiazepines, we’ve been able to demonstrate that we can make hundreds of grams a day very simply, with very simple equipment. … It’s easy for some drugs, and it’s really hard for some other drugs. So, you know from where we’ve come, I think we’ve come quite a long way.”

To McGuire, who has a Ph.D. in organic chemistry from Colorado State University, his current work feels like his old grad student days — working long hours in the lab, even Saturdays, running experiments, filling hundreds of pages of notebooks with notes. Indeed, his old lab partner from grad school — David Thompson, a Purdue professor and co-founder of Continuity Pharma — recruited him for the job.

He looks back with fondness at his time at Stevens, where he was president of Chi Phi fraternity — an admitted frat boy who discovered his love of chemistry through two of Stevens’ most respected chemistry professors, Ajay Bose and Maghar Manhas. “I was very fortunate to go to Stevens,” McGuire says. As early as freshman year, he got the chance to work with Bose and Manhas in their labs. “That time in the labs showed me what I wanted to do with my life,” he says. “I worked there for four years and, after that, my career choice was never in doubt.”

These days, the hours at Continuity are long. “I just imagine that I am still a grad student,” McGuire says. ”The trouble is, my 65-year-old body sometimes disagrees.” He and his wife are enjoying a new life in a college town, and he will work as long as he can.

In the evening of his long career, McGuire continues to find meaning and purpose, in his work, his family and through his Catholic faith, too. He cites the motto, from St. Benedict, that he and his family strive to live by: “Ora et Labora” — prayer and work.