“I found a better work-life balance for myself and my family.” 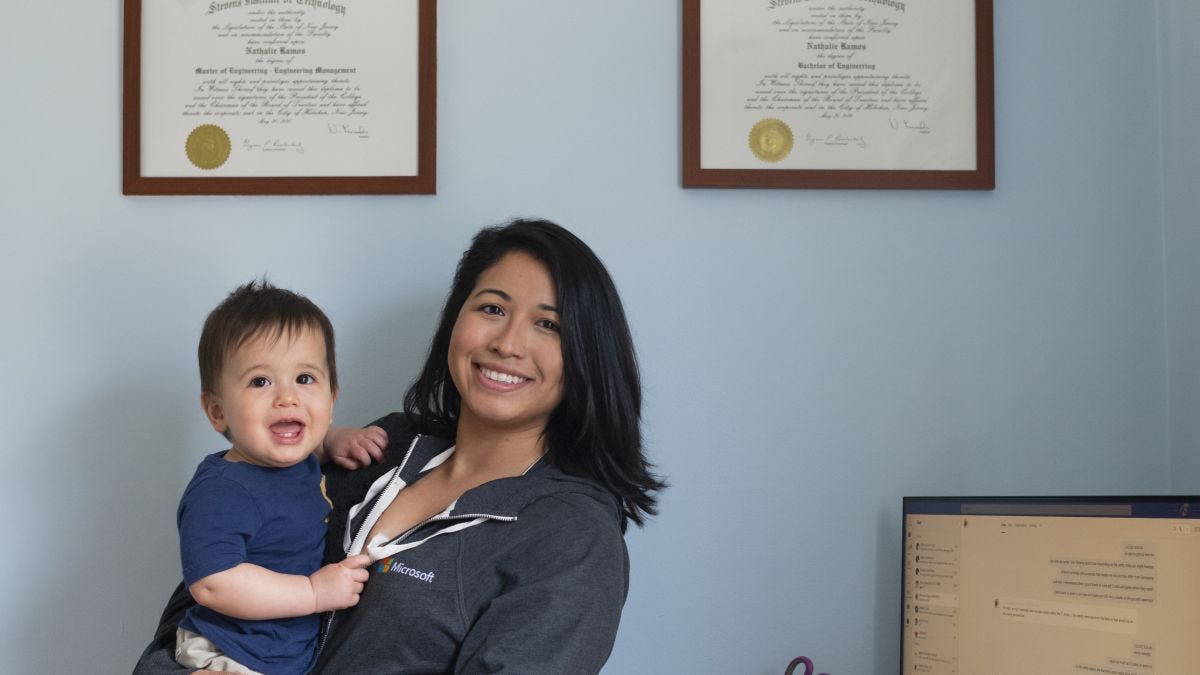 Working remotely as a customer success account manager with Microsoft, Nathalie Ramos ’14 M.Eng.’15 is no longer committed to a long and costly commute, and has more time to spend with her son, Ronan, during breaks throughout the day. Photos: John Emerson

Nathalie Ramos ’14 M.Eng. ’15 found a remote work opportunity that aligns with her career goals and allows her the flexibility she needs as a new parent.

“I was supervising union employees right out of college,” she says. Ramos was part of the company’s leadership development program, a proven training ground for future directors and C-suite executives. During her six and a half years with the utility, she took on increasing responsibilities and earned several promotions. But while her work life continued on the steady trajectory she began post-college, Ramos’ personal life was changing.

In 2017 she married Ryan Williams ’14, and two years later, the couple purchased a home in suburban New Jersey. For Ramos, the move stretched her total daily commute from three hours to four hours, and her monthly budget for fuel, tolls and car maintenance climbed to about $500. Ramos often found herself working late at the office to avoid the bumper-to-bumper traffic of rush hour.

“I wouldn’t get home until eight o’clock at night,” she remembers. “When it was just my husband and me, that was the norm. We’d have a quick dinner, go to sleep, and then do it all over again.”

And then suddenly, her commute stopped. Like so many others, Ramos began working remotely in response to the start of the COVID-19 pandemic in March 2020. For almost two years, she did her job from home — and did it well (she was promoted once again in December 2020). The flexibility of remote work was a game-changer for Ramos and her husband, especially when they welcomed their first child, Ronan, in May 2021. But by the fall of that year, it became clear that the utility was ready to begin transitioning its employees back to the office, returning to a firm in-person work policy.

“[When I was pregnant] I remember everyone saying that when you have kids, it changes your perspective,” she says. “I was on a trajectory to keep climbing the corporate ladder, but once I had my son, I realized I just wanted to spend time with him.”

Ramos was torn — she felt loyalty to the company that jumpstarted her career, but she knew that she didn’t want to go back to commuting and miss out on precious time with her family. While she was considering her options, a friend from Stevens shared an interesting opportunity.

Dylan Ozyjowski ’15 had been working in the construction industry before joining Microsoft in April 2021. On a visit to meet her new baby, he told Ramos about the flexibility offered in his new job and mentioned that she might be a good fit for the company. Within a few months, Ramos resigned from the utility and started working for Microsoft as a customer success account manager in January 2022.

“My previous work experience and ability to translate between engineers and customers made me the ideal candidate for my new role,” says Ramos. “I ensure my [enterprise] customers get the most out of their support agreements while also driving cloud adoption and paving the way for digital transformation so they can get the most value out of their technologies.” 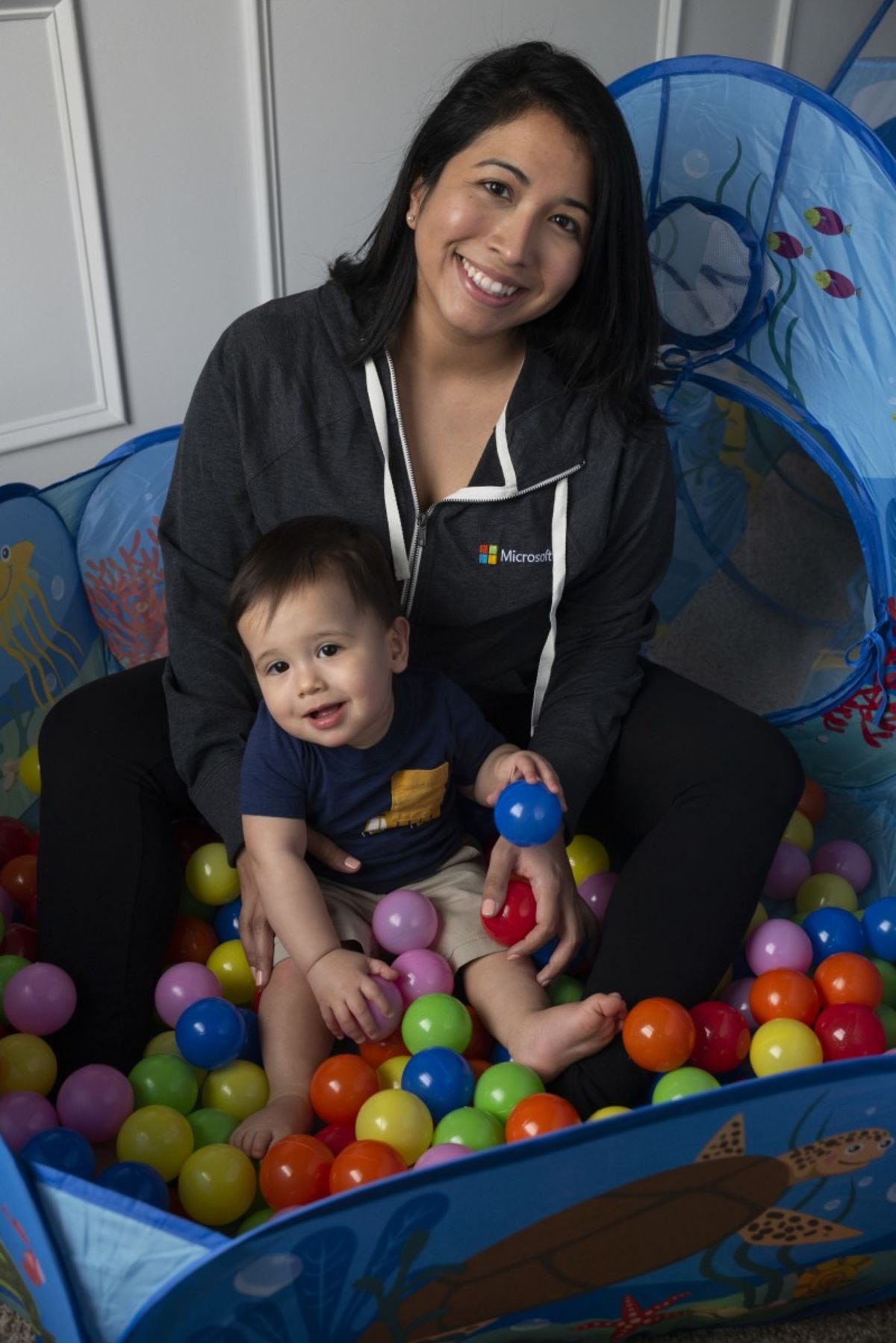 Her new position allows her the freedom to choose between working at home or at the office. “You have options, I think that’s the big difference — you can choose to go in instead of being obligated.” Though Ramos employs a babysitter to care for Ronan while she’s working, she loves being able to see him throughout the day. “I can take him to doctor’s appointments, I can take a quick break to go hug and kiss him, or play with him for 30 minutes at lunch,” she says. “I hear from so many people that they didn’t have that opportunity raising their children, ten years ago, five years ago, even two years ago, so I don’t take that for granted. I’m so grateful to now be at a company that prioritizes a work-life balance.”

Ramos is also excited by the company’s culture. “I see the diversity, the inclusivity, the emphasis on employee well-being,” she says. Designated “unplugged” days — in addition to mental health and vacation days — are just some of the many benefits that she points to as evidence of Microsoft “walking the walk” when it comes to promoting wellness. Transitioning into an entirely new industry was a bit daunting, but Ramos was paired with a mentor who helped orient her to her new workplace. Since developing and utilizing remote work tools has already been part of Microsoft’s business model for several years, Ramos feels that her new colleagues are well-practiced at welcoming newcomers virtually.

“Everyone is so friendly, I already feel like part of the team,” she says. “Even upper management is very approachable here.” When friends ask Ramos how she found her new career, she is quick to point out the importance of networking and keeping in touch with classmates.

“I think we underutilize our network — everyone I graduated with from Stevens has really great jobs and are always moving up,” she says. “A lot of us get very niche in our work lives and aren’t aware of other opportunities that are out there … I would never have considered this position if it weren’t for Dylan.”