How the Beetle Got Its Bang 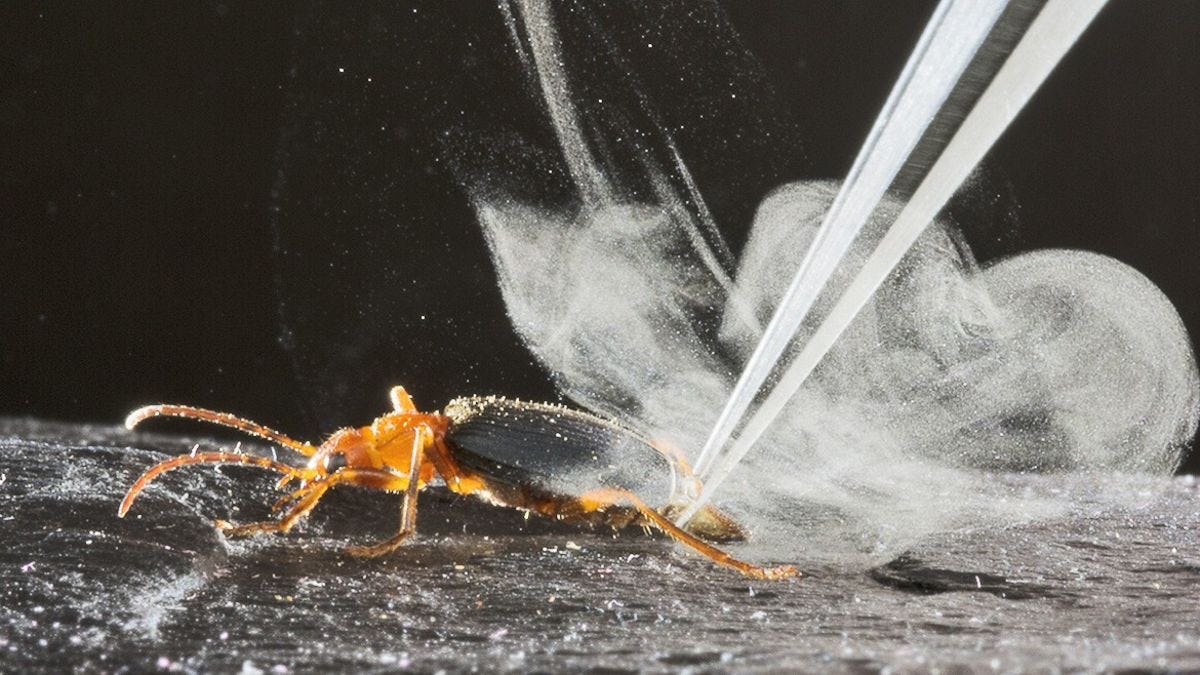 (Hoboken, N.J. - June 16, 2020) -- If you want to see one of the wonders of the natural world, just startle a bombardier beetle. But be careful: when the beetles are scared, they flood an internal chamber with a complex cocktail of aromatic chemicals, triggering a cascade of chemical reactions that detonates the fluid and sends it shooting out of the insect’s spray nozzle in a machine-gun-like pulse of toxic, scalding-hot vapor. The explosive, high-pressure burst of noxious chemicals doesn’t harm the beetle, but it stains and irritates human skin—and can kill smaller enemies outright.

The beetle’s extraordinary arsenal has been held up by some as a proof of God’s existence: how on earth, creationists argue, could such a complex, multistep defense mechanism evolve by chance? Now researchers at Stevens Institute of Technology in Hoboken, N.J. show how the bombardier beetle concocts its deadly explosives and in the process, learn how evolution gave rise to the beetle’s remarkable firepower.

“We explain for the first time how these incredible beetles biosynthesize chemicals to create fuel for their explosions,” said Athula Attygalle, a research professor of chemistry and lead author of the work, which appears today in the July 2020 issue of the Science of Nature. “It’s a fascinating story that nobody has been able to tell before.”

To trace the workings of the beetle’s internal chemistry set, Attygalle and colleagues at University of California, Berkeley used deuterium, a rare hydrogen isotope, to tag specially synthesized chemical blends. The team led by Kipling Will then either injected the deuterium-labeled chemicals into the beetles’ internal fluids, or mixed them with dog food and fed them to the beetles over a period of several days.

Attygalle’s team sedated the bugs by popping them in the freezer, then gently tugged at their legs, annoying the sleepy insects until they launched their defensive sprays onto carefully placed filter papers. The team also dissected some beetles, using human hairs to tie closed the tiny ducts linking their chemical reservoirs and reaction chambers, and sampling the raw chemicals used to generate explosions.

Using mass spectrometers, Attygalle checked the samples sent to Stevens for deuterium-labeled products, enabling him to figure out exactly which chemicals the beetles had incorporated into their bomb-making kits. “People have been speculating about this for at least 50 years, but at last we have a clear answer,” Attygalle said. “It turns out that the beetles’ biochemistry is even more intricate than we’d thought.”

Previously, researchers had assumed that two toxic, benzene-like chemicals called benzoquinones found in the beetles’ spray were metabolized from hydroquinone, a toxic chemical that in humans can cause cancer or genetic damage. The team at Stevens showed that in fact just one of the beetle’s benzoquinones derived from hydroquinone, with the other springing from a completely separate precursor: m-cresol, a toxin found in coal tar.

It’s fascinating that the beetles can safely metabolize such toxic chemicals, Attygalle said. In future studies, he hopes to follow the beetles’ chemical supply chain further upstream, to learn how the precursors are biosynthesized from naturally available substances.

The team’s findings also show that the beetles’ explosives rely on chemical pathways found in many other creepy-crawlies. Other animals such as millipedes also use benzoquinones to discourage predators, although they lack the bombardier’s ability to detonate their chemical defenses. Evolutionarily distant creatures such as spiders and millipedes use similar strategies, too, suggesting that multiple organisms have independently evolved ways to biosynthesize the chemicals.

That’s a reminder that the bombardier beetle, though remarkable, is part of a rich and completely natural evolutionary tapestry, Attygalle said. “By studying the similarities and differences between beetles’ chemistry, we can see more clearly how they and other species fit together into the evolutionary tree,” he explained. “Beetles are incredibly diverse, and they all have amazing chemical stories to tell.”