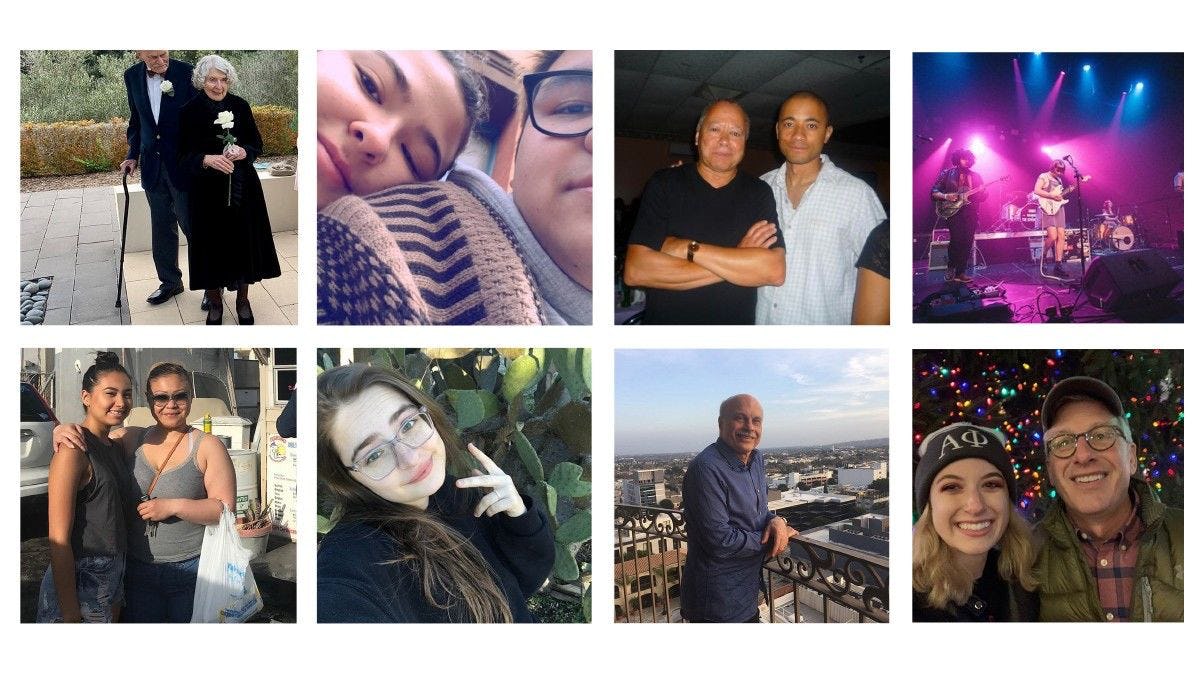 The concept of having a pen pal—that curious notion of building a friendship across vast geographical and cultural differences using nothing but texts—may strike us as an antiquated notion from the bygone era of snail mail. However, tech-savvy faculty and students of the College of Arts and Letters have recognized the profound power of the pen pal relationship and reinvigorated it for the modern—and too often divided—era.

Created within the visual arts and technology program last semester, the #instagenerations project paired college students with senior citizens who then built relationships through daily exchanges on Instagram. Intergenerational relationships are not easy to forge, but this effort drew the groups and individuals together, one post at a time.

"Though communication channels have exploded in the past 10 years, in large part due to social platforms and digital technologies, the diversity of daily social interactions has decreased," said Nancy Nowacek, an assistant professor at Stevens who built lessons on anti-ageism into her curriculum. "More and more, society has become siloed by age, interest, and belief."

In contrast, her design course explored the realities of aging, and by interacting with their senior pen pals, students came to discover more commonalities than differences. "This project was designed to help older participants become more comfortable using social media, explore its possibility, and express their voice digitally," said Nowacek. "It also demonstrated to Millennials, for whom social media is second nature, that being older has just the same density of texture, vitality, and challenge that being 20 does."

To bring the project together, Nowacek reached out to Senior Planet, a flagship program within the non-profit Older Adults Technology Services (OATS). "Senior Planet is OATS's outward facing brand that is a welcoming environment for all older adults," said Aaron Santis, the program manager who helped coordinate #instagenerations. On a day to day basis, the organization works to bolster older generations' social and civic engagement, creative expression, financial security, and health. In addition, Santis said they "teach members how to use technology as a tool to change the way we age."

So what did these digital pen pals bond over? Throughout the month-long project, participants were presented daily prompts on what to post. "Someone or something you LOVE" read the first cue. "A weekend indulgence," "a favorite old photo," and "a most treasured possession" were a few that followed, and with each passing day, participants found more and more in common.

For instance, a student shared that they start each day with a strawberry Yoohoo, while their partner showed off the Chips Ahoy cookies they dunk into coffee every morning. 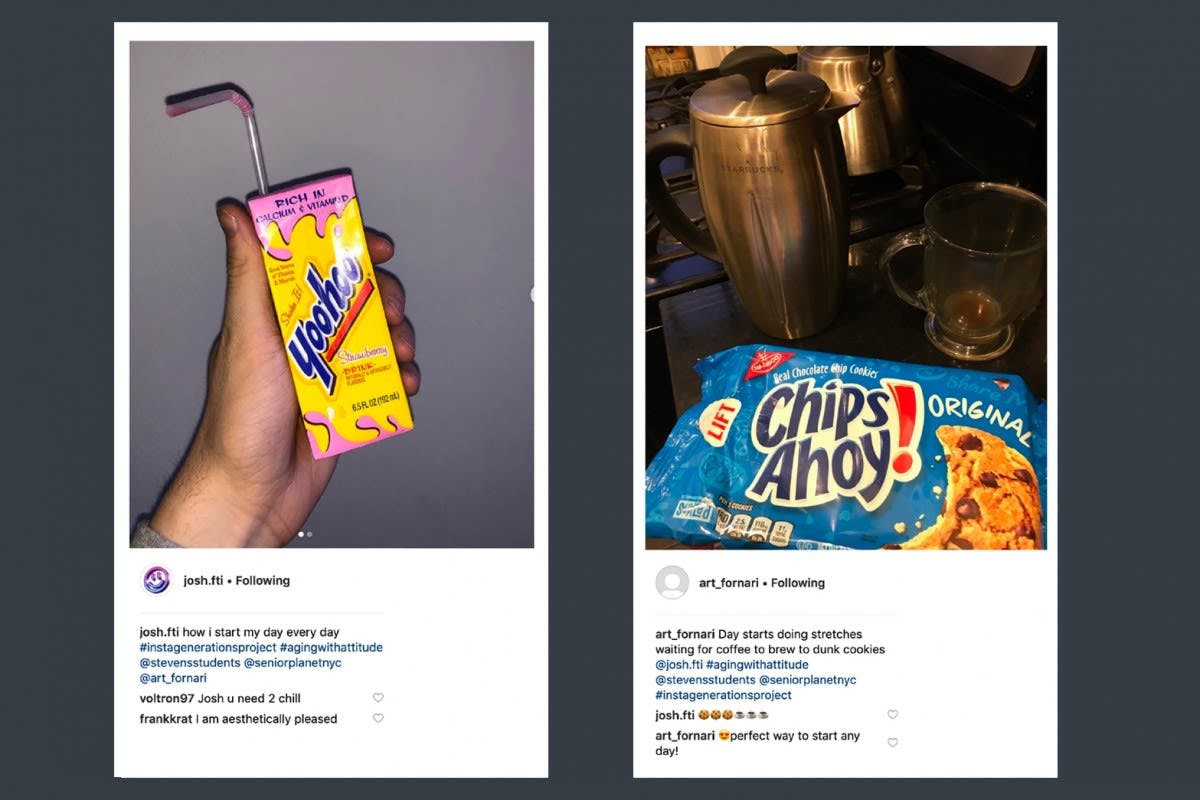 Affinities for art proved to be mutual.

And, a shared love for taking some time to look out the window became clear. 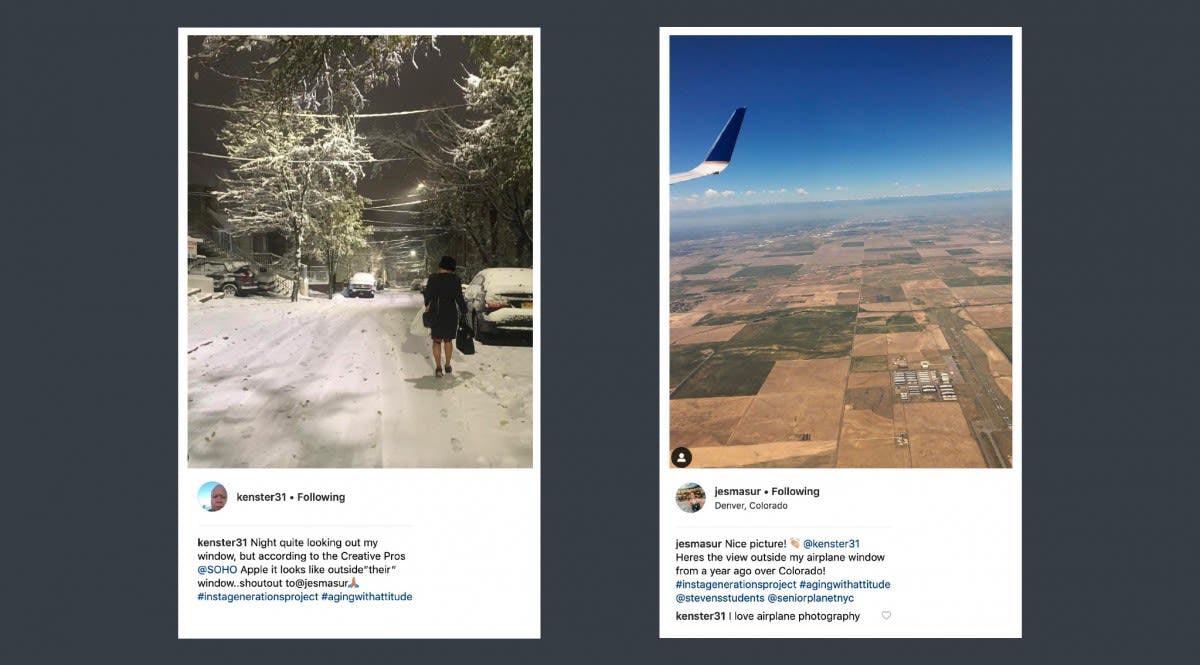 "The shared interests that surfaced between the two generations were unexpected," said Nowacek, "as was their mutual anxiety about making daily posts on Instagram." Yet, by the end of the month, participants on both sides were eager to keep going.

All in all, students built this affinity throughout the semester, diving into projects that strengthened their understanding of more senior generations. To start, they designed posters, lambasting the absurdities of ageism.

Real intimacy between the generations became most prominent in their final project, a podcast series in which students interviewed their older counterparts. Titled Life in General, this series of conversations unmasked the everyday likes and desires common to people of any age. Great green smoothie recipes were shared, along with first-apartment horror stories and favorite spots in New York City.

If the podcast had a breakout star, it was Katherine Corrigan, a 92-year-old New York City resident who Stevens' students described as a "force to be reckoned with." Within minutes, her tales of dating exposed a mentality more commonly associated with those decades her junior. "I don't sit at a table, I always sit at the bar, and I usually meet men, and I usually have a good time," said Corrigan. Asked if she still goes to her favorite places, her answer was quick and to the point. "Yea! Otherwise, why live?"

In the final moments of her interview, Corrigan passed along words of wisdom, verbalizing a mantra for both Stevens' students and their new friends to live by. "Mostly, have as much fun as you can no matter what your age," said Corrigan. "I think that's highly underrated."

These lively interactions were beneficial for Stevens students, proven not just anecdotally but also quantitatively. Hearing about the Nowacek's anti-ageism curriculum, assistant professor of social sciences Ashley Lytle decided to get involved. “Facilitating positive intergenerational contact and challenging inaccurate aging beliefs through education reduced ageism,” said Lytle, who conducted assessments at the beginning and end of the semester. “Participants showed a significant decrease in aging anxiety, psychological concerns about aging, and negative stereotyping of older adults during the semester long #instagenerations project.”

With this evidence, Lytle and Nowacek will present at this November's Gerontological Society of America (GSA) in Austin, Texas, and in future classes, the two hope to run new iterations of the project, to once again introduce friends across generations.