Duck and Cover in the 21st Century 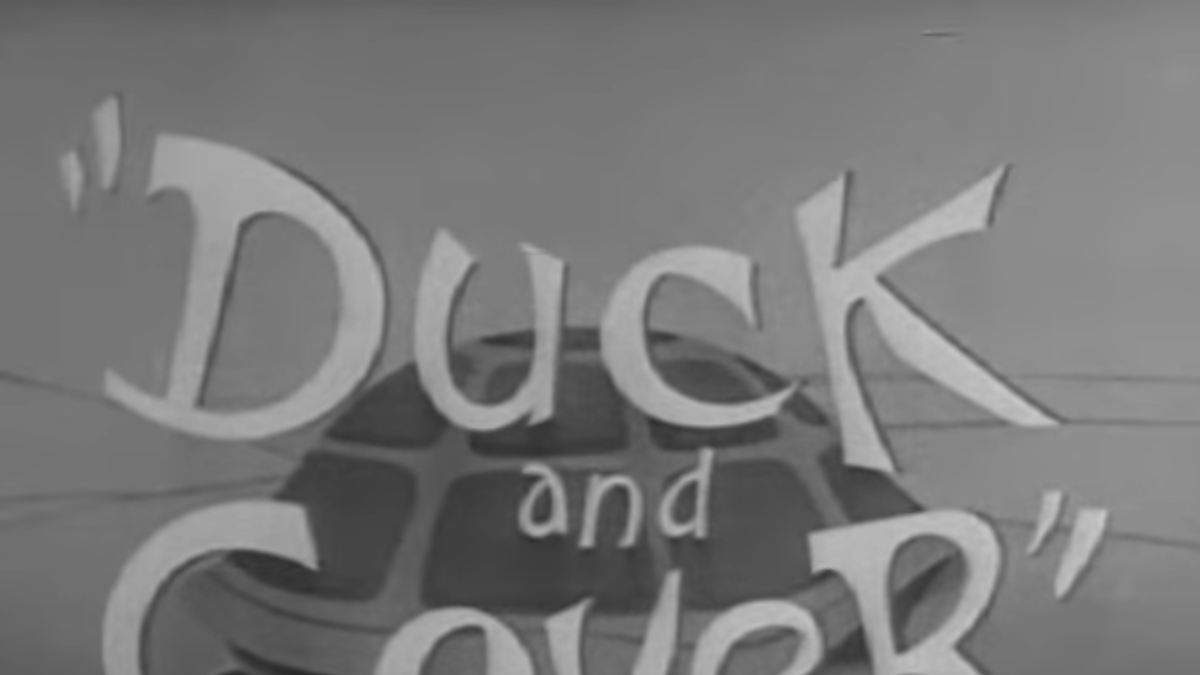 Three members of the College of Arts and Letters' faculty—Kristyn Karl, Alex Wellerstein, and Ashley Lytle—reassess nuclear risks communications for the modern day.

"When there's a flash, duck and cover and do it fast," advised the narrator of a 1952 film from the US Federal Civil Defense Administration. Widely distributed throughout the states, the black and white video, aptly named Duck and Cover, employed the animated Bert the Turtle to teach children to react with speed and composure in the case of a nuclear attack. At the time, the lesson was well understood, but as years passed and perceived nuclear risk waned, these communications about preparedness reached fewer and fewer Americans.

Now, a team of researchers from Stevens' College of Arts and Letters believe it's time to reevaluate and rebuild nuclear risks communications for the 21st century. Funded by a grant from the Carnegie Corporation of New York, the Reinventing Civil Defense (RCD) Projects' team includes Kristyn Karl, assistant professor of political science; Alex Wellerstein, assistant professor of science and technology studies; and Ashley Lytle, assistant professor of psychology. Together, they're evaluating the public's current understanding of nuclear warfare, while also supporting and measuring the effectiveness of modernized communications.

"Frankly, the prospect of a nuclear detonation can almost seem mythical," said Karl, speaking to the populace's current perceptions. "Between the lack of awareness of and information about nuclear weapons and popular media accounts that dramatize these events, there was not a real foundation for understanding what it would mean in the real world." This finding arose from two papers that Karl and Lytle wrote as an RCD subproject, which received complementary funding from the Thompson Family Foundation.

"A key part of our research was to better understand Americans' existing attitudes about nuclear and knowledge of what to do in the case of an attack," said Lytle, describing their first article, which was published in the International Journal of Communication last year. The purpose of the subsequent study, which published in the Journal of Risk Research, was "to examine how exposure to nuclear preparedness messaging impacts message recall for the recommended action, confidence in the accuracy of the message, and message acceptance, which subsequently carries over into behavioral intentions to act in a manner consistent with recommendations."

Both studies produced a wealth of information. For example, factors such as living in an urban or rural environment, being a man or a woman, and following the news or a myriad of media all showed correlational effects on a person’s perception of nuclear risk. Yet, age proved to be the factor with the strongest individual effects, likely due to generational differences in exposure to nuclear information. While younger Americans matured in a media landscape largely void of nuclear discussions, older generations crystallized their awareness of nuclear affairs by living through the Cold War and the initial Civil Defense campaigns.

Nevertheless, most information about the development of nuclear warfare and power remained classified throughout the 20th century, a topic at the heart of Wellerstein's new book, Restricted Data: The History of Nuclear Secrecy in the United States. "The American atomic bomb was born in secrecy," reads its description. "From the moment scientists first conceived of its possibility to the bombings of Hiroshima and Nagasaki and beyond, there were efforts to control the spread of nuclear information and the newly discovered scientific facts that made such powerful weapons possible." As the concealment of information and risk of attack evolved, generations of Americans experienced varying message exposures and formats.

“Thus, the challenge changes based on the audience,” said Karl about new communications on nuclear preparedness can be effective. “For younger Americans, introducing the information and increasing confidence in it is key whereas for older Americans introducing newer information while addressing existing beliefs will be key.”

To aid in this pursuit, the RCD team in 2019 organized The Bomb and You, a public exposition and workshop that presented newly developed communications on nuclear risk. Manifested through video games, virtual reality, live performances and more, the core message to observants remained the same: get inside, stay inside, stay tuned.

About the College of Arts & Letters

Devoted to research and scholarship, the College of Arts and Letters explores the humanities and arts through the lens of science and technology. This interdisciplinary unit of Stevens offers seven undergraduate majors, 14 minors, and an accelerated law program.