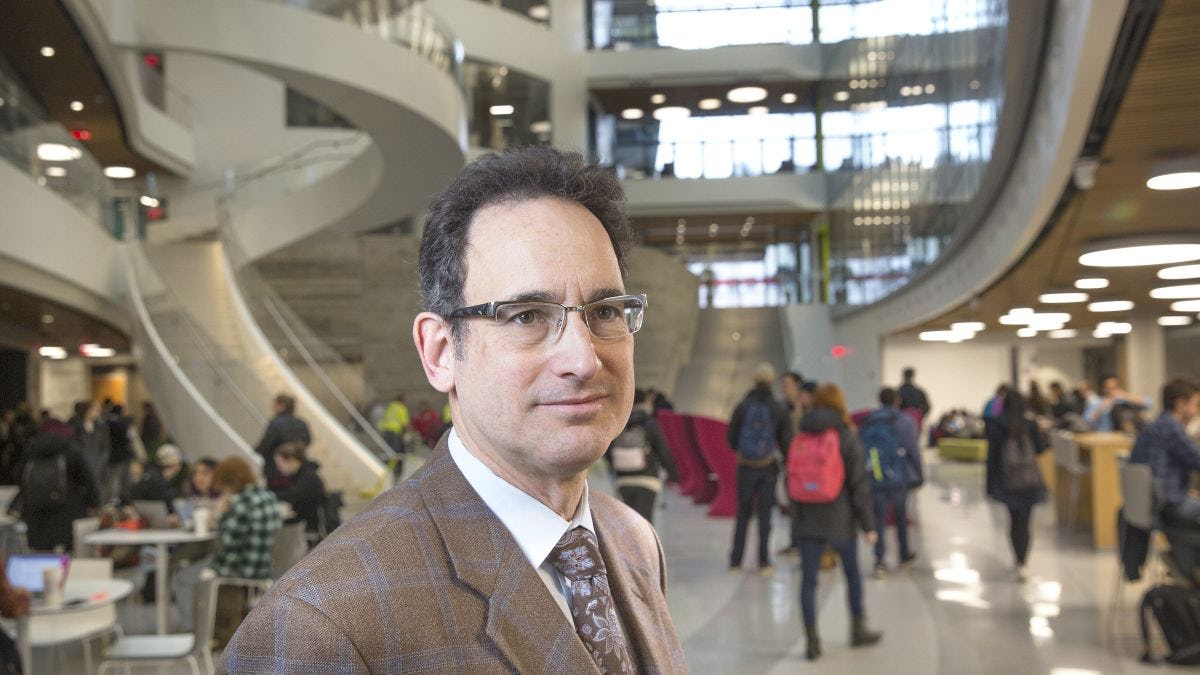 David Luzzi ’80 would probably agree: He is his father’s son.

He’s an optimist, and though he would defer to others — the retired generals he has worked with; the soldiers his research aims to protect; his father, World War II veteran and scientist Theodore Luzzi ’51 — he is also a patriot.

David Luzzi, armed with a Ph.D. from Northwestern University, would go on to teach and conduct research at the University of Pennsylvania, where he would build the nation’s first nanotechnology institute. In 2007, he joined Northeastern University as its dean of engineering. And today, this Stevens graduate leads the growing research enterprise of this 21,500-student research university.

As senior vice provost for research, Luzzi empowers faculty researchers in an effort that has chosen health, security and sustainability as research focus areas, with a total of 55 research centers and institutes across the university representing a wide variety of disciplines, from engineering, technology and the sciences to business, the humanities and arts, social science and law. External research funding — the National Science Foundation, the National Institutes of Health, the Department of Defense and others are major funding sources — has doubled over the past five years.

And Luzzi wears a second hat as vice president for the Northeastern University Innovation Campus at Burlington, Massachusetts. Home to the Army Research Laboratory, Northeast, and the George J. Kostas Research Institute for Homeland Security (KRI) — which Luzzi built with Northeastern alumnus Kostas in 2011 — the Burlington campus alone has brought in 17 corporate partners and multi-million-dollar sponsored research from the government and corporations.

As Luzzi sees it, his devotion to his work — and to addressing some of society’s greatest challenges — is his way to serve his country.

The optimism shines through when he speaks about research advances, such as sustainability research at Northeastern and at other universities and organizations around the world.

“I am convinced that technology will be the answer to global warming,” he says. Clearly, Luzzi is a man with a mission.

He is also very busy. When reached by phone this past November, Luzzi is in Burlington. He splits his time between here, Northeastern’s Boston campus and traveling throughout the country and world, to meet with research partners or to launch security initiatives with new partners. (The following week, he flew to Japan.)

Luzzi does not oversee faculty researchers directly but is the overseer of the research enterprise. He also manages several large-revenue research programs, oversees the seven cross-college, interdisciplinary institutes, research compliance and the campus’ research spaces.

A major focus is his leadership of the university’s large DoD programs in areas such as expeditionary cyber, counter Unmanned Aircraft Systems (UAS) and additive (3D) manufacturing. And as chairman of the KRI, he manages the relationship with its corporate partners, for which KRI provides programs in areas such as cybersecurity, materials and devices, and nano-manufacturing.

While serving as Northeastern’s dean of engineering, from 2007 to 2011, Luzzi was credited with launching new programs, including a Ph.D. program in bioengineering, and greatly increasing the number of faculty and researchers, as well as important achievements in philanthropy (the KRI was one major coup) and the cultivation of corporate partners. His is a long career full of crowning achievements: more than 130 publications and patents combined; two spin-off companies from his research lab at Penn; research programs that performed projects for NATO, NASA, the European Union, the Navy and others.

The steadfast support and encouragement of Marla, his spouse of 30 years, has been a crucial part of Luzzi’s story. Together, Marla and he raised twin sons, an engineer at Raytheon Corporation and an officer in the U.S. Navy.

Luzzi’s work with the KRI and his efforts to attract and mentor young faculty have also made an impact. “If you want to be a successful leader, you must get much satisfaction out of the success of other people,” he says.

His time at Castle Point gave him his first taste of leadership as he served on the Student Council and as a resident assistant for a freshman dorm, where problem-solving was practically a daily part of the job description.

Close friendships, meeting students from around the world and challenging academics all shaped him, Luzzi says.

“My Stevens experience was that this was a place for academics. It was a substantial crucible, and we always had to rise to the level of the challenge,” he says.

Meeting this challenge helped him and his classmates realize that they could achieve more than they ever thought possible, he says.

“The rigor and challenge was a good thing, and a tough thing, and we grew into it,” Luzzi says. “It was a tremendous growth experience; Stevens provided that for me.”

In addition to his Ph.D. from Northwestern, he would also go on to earn an MBA from the Wharton School and do a two-year fellowship at Osaka University in Japan.

Knowing that problems are solvable also drives him in his work, he says. His father, now 91, is still his greatest role model, and set the tone.

Theodore Luzzi ’51 graduated high school and immediately enlisted in the Army to serve his country during and right after World War II. He would return home, graduate from Stevens, go on for a master’s at MIT, and become one of the first in the country to earn a doctorate in plasma physics from Columbia University, his son proudly points out. Theodore Luzzi would enjoy a long and distinguished career as a staff scientist with the Grumman Corporation.

“I saw from him that problems can be solved,” his son says. “It came from his life experience. And his time at Stevens.”

David Luzzi counts his service as a member and the science and technology chair of the Air Force Scientific Advisory Board as one of his most important assignments. Serving post 9/11, from 2003 to 2008, he was tasked with bringing a group of retired generals and researchers together to review the Air Forces’ research program and, simply, “to make sure that we were serving the war fighters of today,” he says, “while protecting Air Force research into the future.” The group’s good work — and their coming together, despite their diversity in experiences — made a positive impact.

Luzzi sees much in current and future research that gives him hope; the area of sustainability offers much promise, he says. For example, a company on his campus engaged in vertical agriculture has reduced the seed-to-harvest growth period of arugula to an astonishing 18 days, he says.

Great advances in prosthetics to help people with disabilities, the use of machine leaning and artificial intelligence to establish more individualized health care, even increased understanding of the human brain (“the toughest nut to crack,” Luzzi says), all offer so much potential to improve life, he says.

When he speaks about the future, Luzzi prefers to speak of those things that “energize” him, including addressing the world’s greatest threats.

“The world is becoming a more dangerous place,” he says. “We have conflicting visions of government.” The loss of stable governments, worldwide security concerns — all are great challenges.

Then Luzzi remembers conversations with his father and older relatives, who lived through World Wars and the cataclysmic conflicts of the early 20th century.

“The reality is that our generations have been blessed. We have been living in a time of relative peace and greater stability,” Luzzi says.

“The possibility of losing this more stable time is something that energizes you to work hard and make sure that you do a good job.”