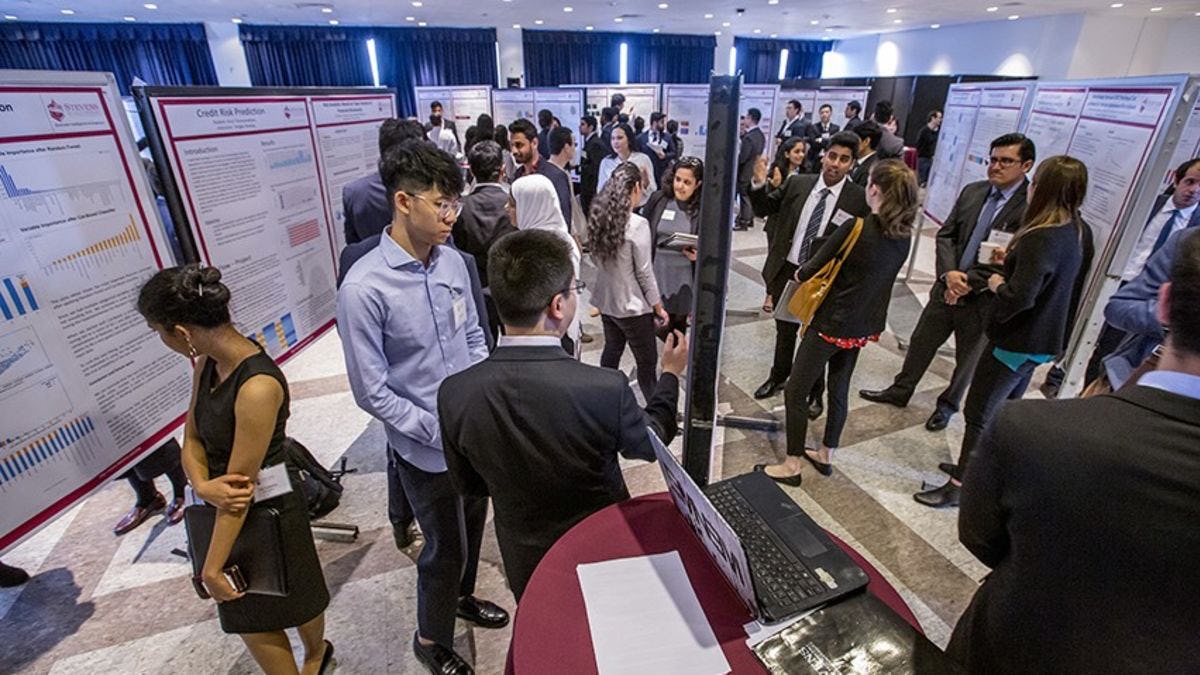 Students in the Business Intelligence & Analytics program at Stevens learn to apply their data science skills to real-world problems. A recent networking event showcased for potential employers how these skills can create value for businesses.

When Stevens Institute of Technology introduced its master’s in Business Intelligence & Analytics nearly eight years ago, it was among the first programs of its kind in the country.

Though other universities have since caught on, students from the School of Business continue to draw the attention of employers who understand the value of applying data science techniques to business problems. 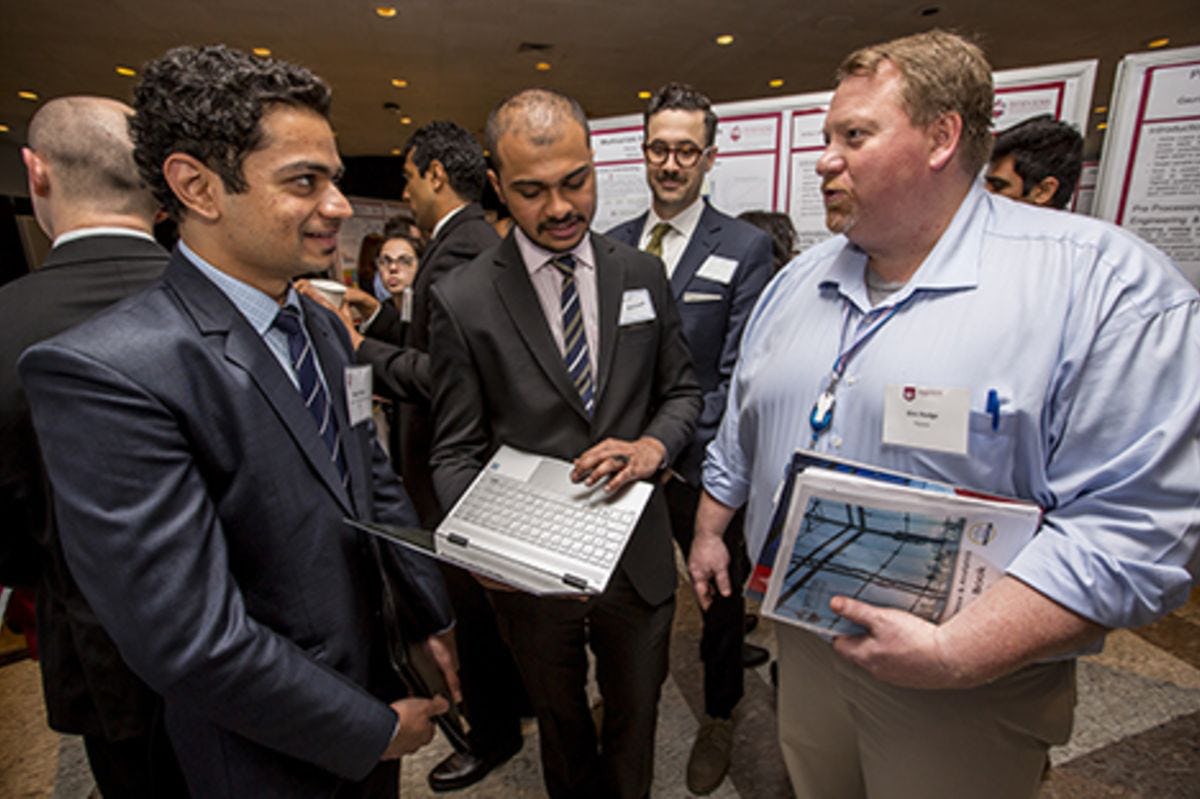 Eric Hodge, right, handles cybersecurity for Pearson and said the research being done by Stevens BI&A students is "what the future is all about."

“The market is very competitive, but there is still a need for creative data scientists who approach problems with the business use case in mind,” said Salman Sigari M.S. ’16, an alumnus of the BI&A program who now works as a senior data scientist at Conduent.

Sigari was among the more than 100 attendees at a recent BI&A networking event, where current students had the opportunity to showcase their research projects for recruiters and other industry professionals. Fifteen companies — including Conduent, UBS and Pearson — also conducted on-site interviews.

Eric Hodge, an IT audit manager at Pearson, said he came to the event in search of potential interns but also found new insights into potential applications for data analytics.

“It’s highly impressive to see what these students have been working on,” he said. “Talking to them about their projects and seeing the different ways data can be crunched to investigate a wide range of topic areas, it’s what the future is all about.”

Research projects in the BI&A program offer students a chance to apply what they’ve learned to business problems. More than just a bullet on a résumé, these projects show potential employers how well a student’s classroom lessons translate to real-world scenarios. Wangming (Mike) Situ M.S. ’17 even brought his BI&A research project poster on a job interview at Millennium Management, which ultimately helped him get hired there as a data engineer.

There is still a need for creative data scientists who approach problems with the business use case in mind.
salman sigari M.S. '16, Senior data Scientist, conduent

“Stevens is very unique for its emphasis on both business domain knowledge and technology — a combination that really prepares you to succeed,” he said. “Data engineering isn’t just about coding — it’s thinking critically about your data and working purposefully with a solution in mind that exceeds expectations.”

At the networking event, that sentiment was echoed by Elliott Cordo, vice president of data analytics at Equinox Fitness, who highlighted the importance of “pursuing the dirty work.”

“It’s not enough to be narrowly focused on trying to predict something because that’s just the tip of the iceberg,” he said. “These students who are actually getting the data, cleansing it, working with it — those are the projects I find most compelling.”

Corporate interest in these BI&A networking events has grown as companies look for new ways to innovate using data. 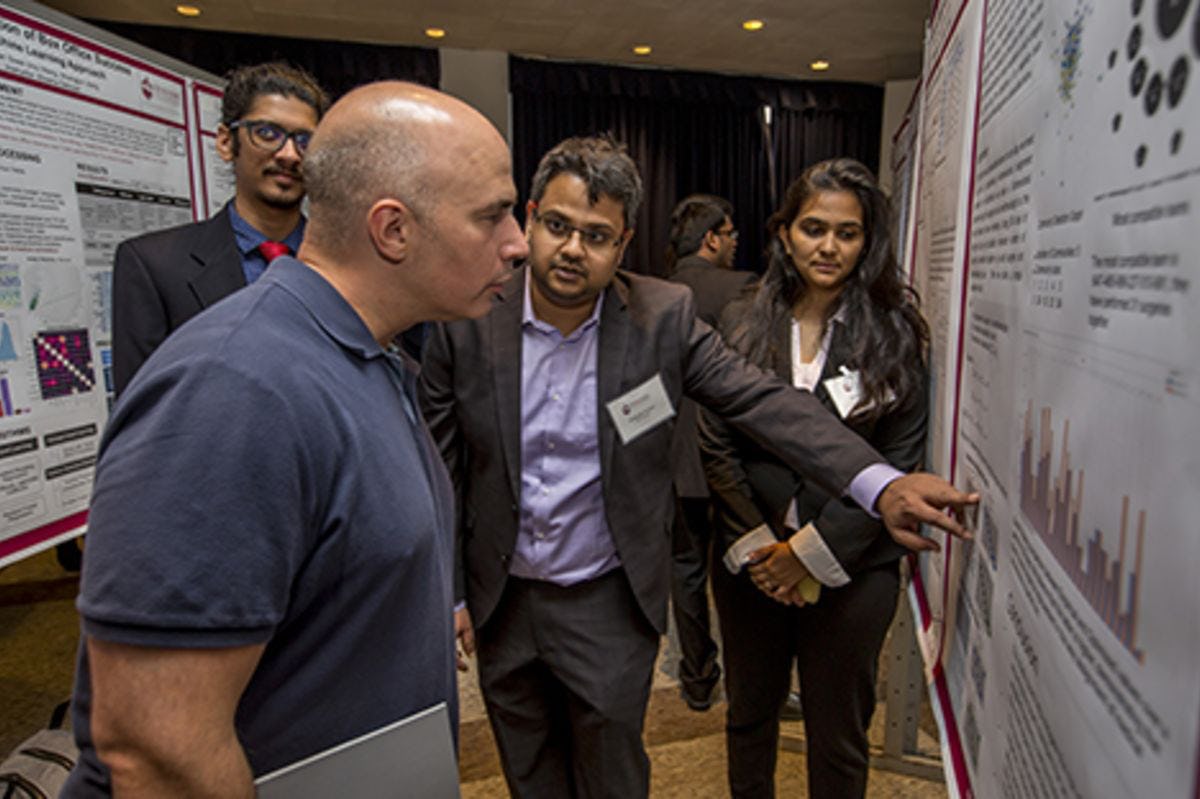 As vice president of data analytics at Equinox, Elliott Cordo, left, was most impressed by Stevens students who went the extra mile in collecting, cleansing and creatively using data for their research projects.

“Ten years ago, people looked at data as an input into an analytic process; today, we look at data as an asset,” said Vimal Vel, who most recently served as vice president and global head of master data solutions at Dun & Bradstreet.

For Vel, the events help him stay on top of the latest data science trends and emerging technologies, as well as “how the vocabulary of the industry is changing.” Talking to potential job candidates about their projects also allows him to see their presentation skills in action.

“Being able to build a narrative around your research is extremely important,” Vel said. “You need to articulate what you set out to accomplish, what you learned and how you got there, and that’s what I heard from students at the event.”

A member of the BI&A program’s board of advisors, Joel Sebold knows how the curricular emphasis on effectively communicating ideas can help Stevens students differentiate themselves.

“There is tremendous competition in the data science field,” said Sebold, also director of research and data science at Refinitiv, formerly the financial and risk arm of Thomson Reuters. “But more roles are going to require these data science skills, and management needs to know how to talk about data science and use it. It’s no longer just limited to data scientists, and that’s why it’s still the best place to be.”