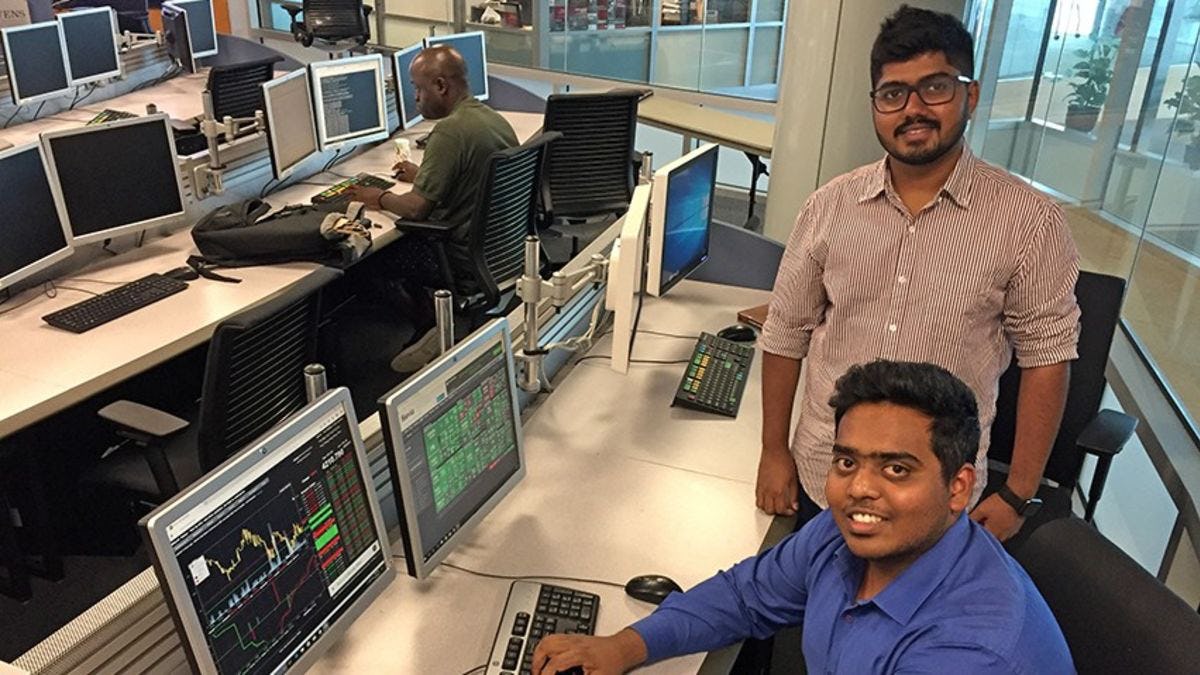 Vishnu Pillai, standing, and Akshay Kumar Vikram look over some financial data in the Hanlon Financial Systems Lab at Stevens. As a team, the pair won two IBM-sponsored hackathons through lessons from their cognitive computing class.

For two guys who hadn’t really met until the spring, Vishnu Pillai and Akshay Kumar Vikram have become fast friends.

After taking a course in cognitive computing in the School of Business at Stevens Institute of Technology in the spring, the pair competed in a pair of IBM-sponsored hackathons — winning both — before accepting internships at a high-tech healthcare startup. Now, they’ve returned to campus to complete their master’s degrees in Business Intelligence & Analytics before pursuing careers as data scientists.

Both students credited Stevens with their early successes, and pointed to the cognitive computing course — a new offering last fall — as an important differentiator. Cognitive computing — the use of self-learning systems that mimic the function of the human brain — is a particularly in-demand discipline, even in the white-hot field of data science. Stevens is one of the few business schools to offer a deep dive into this topic.

It's very rare to find a subject like cognitive computing at other schools. Here, it fits right in with our other courses that integrate cutting-edge technology.
Akshay kumar vikram, BI&A student

“The Business Intelligence & Analytics program is really focused on these high-tech areas and how they are applied in industry,” Vikram said. “It’s very rare to find a subject like cognitive computing at other schools. Here, it fits right in with our other courses that integrate cutting-edge technology.”

“We have a lot of hands-on exposure to R, Python, SAS, Hadoop and Spark through the boot camps,” he said. “And it was especially valuable to do them as classes were starting — it gives you a head start on thinking about how to use these technologies on different projects.”

Understanding those high-powered tech tools was essential as the students competed in the Cognitive Builder Faire and API-First Hackathon. Combined, the two hackathons attracted 1,000 teams, but few were able to develop a product within the timelines.

At Cognitive Builder Faire, Pillai and Vikram took aim at the difficulty drug companies have in finding suitable patients for clinical trials. They built a chatbot that interacted with people traveling near research centers and other medical facilities. Their agent searched for potential participants and, by using Foursquare’s API, could send alerts to people living near research centers.

It’s the kind of enormous problem many have hoped that better application of data could solve. Some reports have found nearly 80 percent of clinical trials fail to meet patient recruitment timelines. 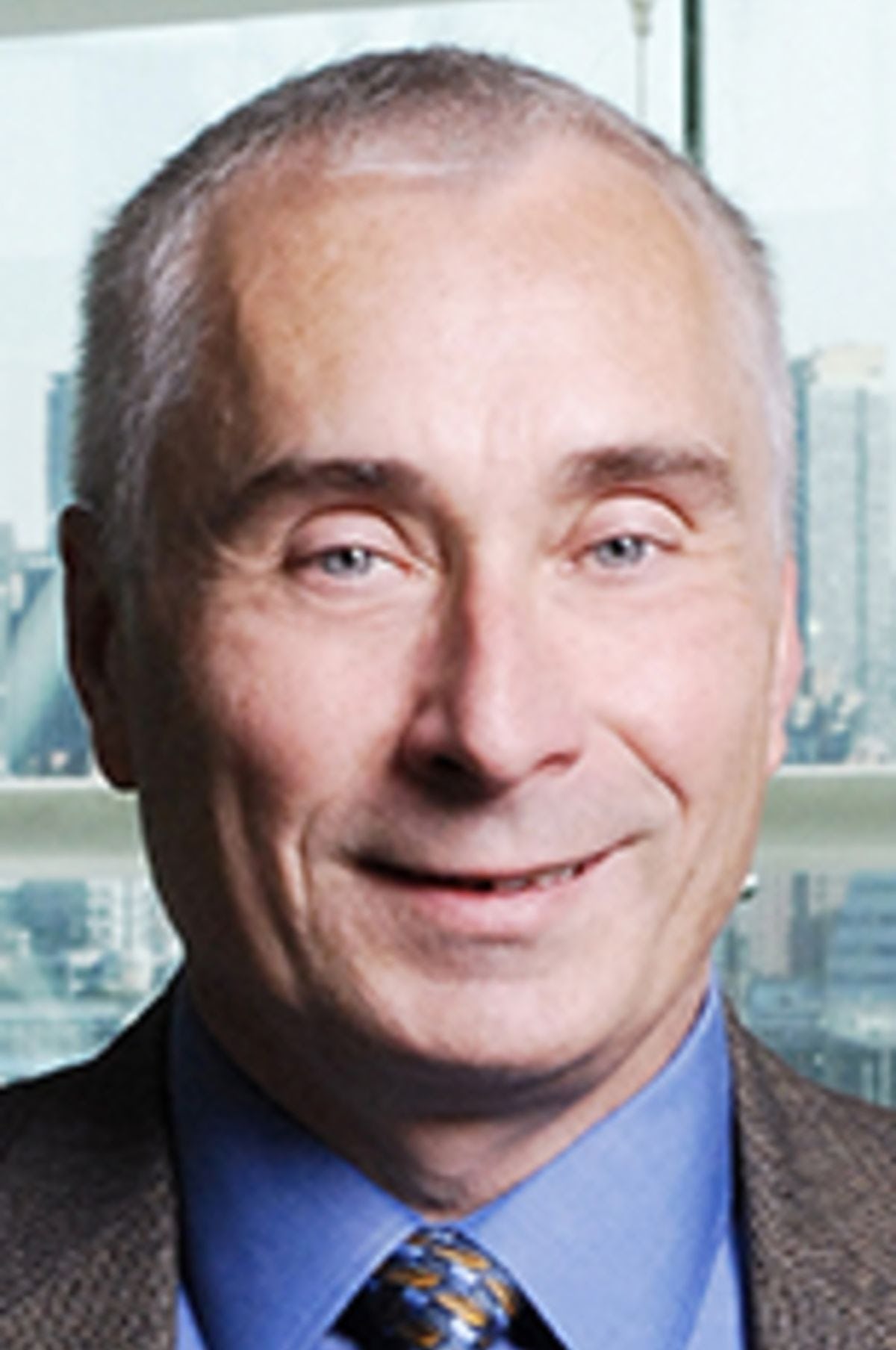 The Business Intelligence & Analytics program was developed to help students like Pillai and Vikram apply data to solve these complex problems. Dr. Christopher Asakiewicz, the program’s director, said demand for professionals who can use high-tech tools to nurture innovation and make data-supported decisions that grow the enterprise in creative new ways.

“Because of the small size and innovative nature of Stevens, we’re able to quickly introduce new courses to meet emerging needs in the market,” said Dr. Asakiewicz, who teaches the course in cognitive computing. “Our board of advisors suggested this was an area of growing need in industry, which has helped us take a leadership role in how these ‘deep-learning’ AI applications are creating opportunities in healthcare, energy management, security, marketing and financial services.”

The students’ work at API-First, meanwhile, helped them score internships. They added a layer of AI and developed an interactive interface to automate searches of PubMed, where most medical literature is housed. Their work aimed to make research at PubMed more accessible, and turned heads at Zignifica, a startup in the healthcare space that’s aiming to use text mining and artificial intelligence to derive useful data from medical research. The company recruited both students as interns, to benefit from their experience in programming, natural language processing, and data scraping and analysis.

Those skills, they said, were honed at Stevens. For instance, in their web analytics course, Dr. Ted Lappas assigned complex projects that had to be completed within the class period, “which taught us how to use our time effectively — very helpful on our internship, which was intense,” Pillai said. And the cognitive computing class “introduced us to a very broad set of tools and skills being used in the AI world, and gave us a really good head start,” Vikram said.

Both students will graduate in December, and hope to become data scientists upon graduation. It’s clear Stevens has given them the skills needed to turn heads in industry.

“The course structure and curriculum of the program are so valuable,” Vikram said. “I like what they’re teaching and I like the proximity to New York, which will make finding a job hopefully that much easier.”