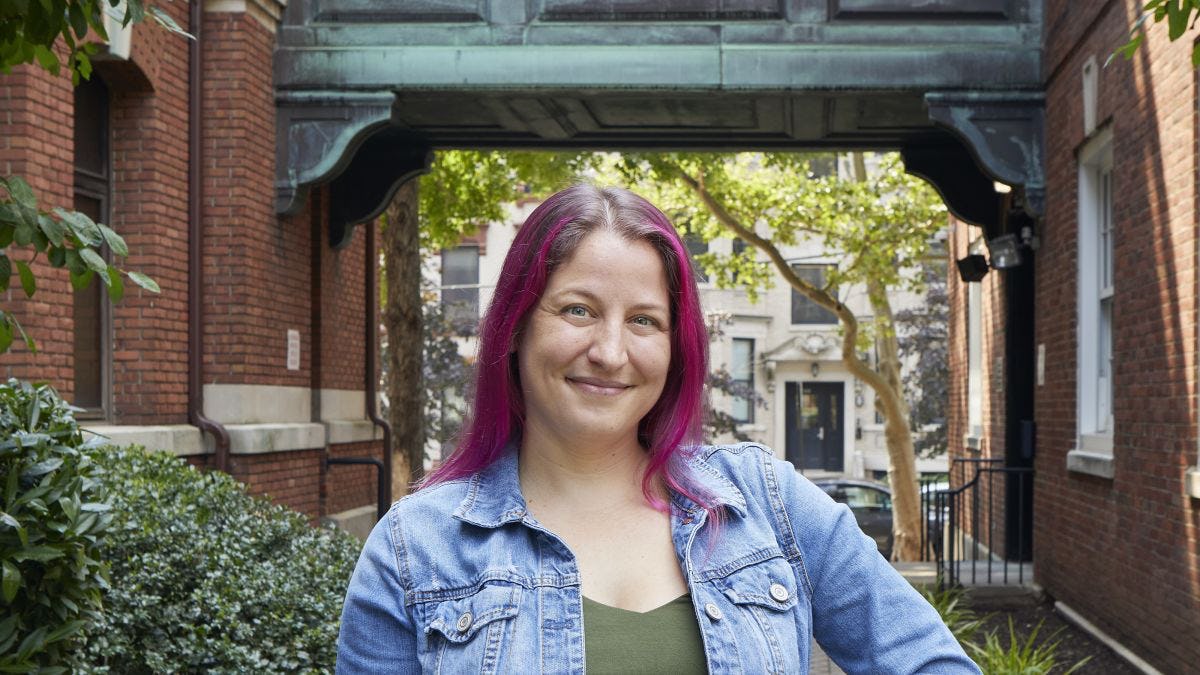 It’s the second day of the Firefly Festival in Delaware. Live acts are playing on stages, but a strong storm with dangerous lightning is moving in. Organizers suddenly decide to shut down the entire concert for the night, even as the event is broadcasting live to a worldwide audience on a four-minute delay.

Within those four minutes, the broadcast’s producer must decide how to take that live broadcast off the air; tell the hosts what to tell their viewing audience; write and push emergency messages to the venue’s many video screens; and return safely to her hotel.

It all happens without a hitch.

Two nights later, the weather has improved; the four-day festival is wrapping up. There’s another problem. The headline act’s management won’t let its performance set be broadcast live. Nobody on site knows why, but the act is edited out of the live broadcast.

Then, just minutes before final sign-off, word comes down: the act has changed its mind.

“We had about one minute of lead time, that time,” recalls Allyson Vecchione ’09, again pressed as producer to make a split-second decision. “I had to shift the broadcast to commercial, get brand-new graphics ready, have a playback person ready, cue up the next clip, talk to master control about inserting an emergency commercial break, and then scramble to put that next live segment together during the three-minute break.

“We knew we could only broadcast three songs, but we didn’t know where they would be in the set.”

Once again, the broadcast returns from commercial, the act begins to play, and nobody viewing is the wiser.

On California's Coachella festival:"It's my favorite festival to work. The weather is always great, the music is always amazing, and it's just a fun atmosphere. Really long days, but worth it.
Allyson Vecchione ’09

It was all in another day’s work for Vecchione, who travels nationwide and worldwide keeping live broadcasts and recorded concerts — like the New Orleans Jazz Festival, Farm Aid, California’s Coachella festival and Lollapalooza, including this summer’s event in Chicago —flowing smoothly from behind the scenes.

So smoothly, you probably never notice her at all.

From Stevens to the Live Stage

Growing up in New Jersey, Vecchione always knew she wanted to work in music and television. She watched hours of music videos on the VH1 and MTV networks while preparing for school and attended concerts in Hoboken and New York City.

She never thought about attending Stevens to prepare for such a career — until a chance encounter between her mother and a Stevens recruiter who told her about the university’s new program in music and technology.

It was during the formative years of that College of Arts and Letters (CAL) major program — which has since become one of the college’s signatures — but current CAL faculty members such as Rob Harari, Carlos Alomar and Andy Brick were already in place and teaching.

“From her very first class with me, I recognized in Allyson a keen ability to understand and assimilate new information in a manner that is at once deeply perceptive and contextually relevant,” remembers Brick. “And so, when I was asked to conduct Game ON! at the Kennedy Center with the National Symphony Orchestra (in January 2020), I was absolutely sure Allyson’s outstanding reputation in the field was well deserved and that I could entrust her with the very demanding role an associate director must assume.”

For several summers during her Stevens years, Vecchione worked in New York City for a live syndicated music-television show, Fearless Music, as production coordinator. That meant booking guests, setting up artists on a live stage, even prepping the audio console for the engineer. 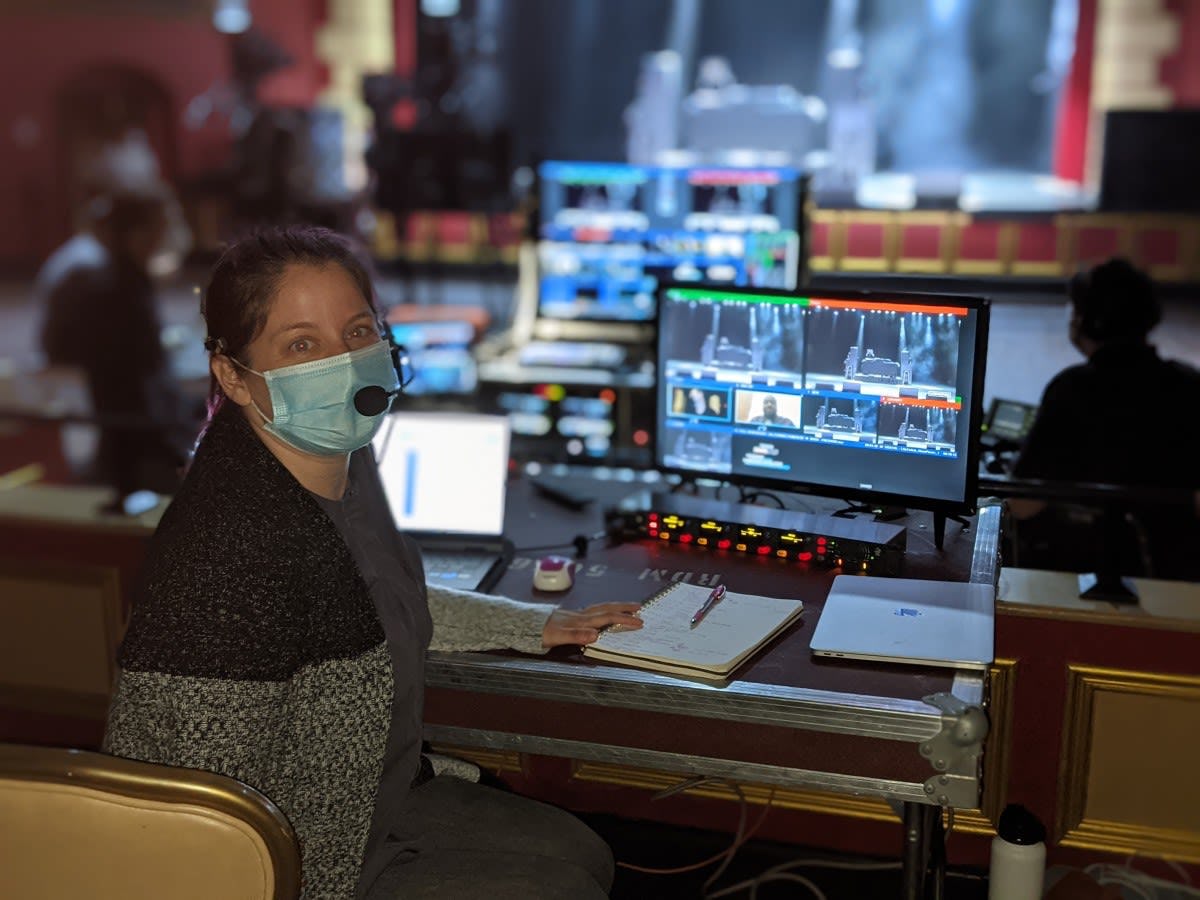 Allyson Vecchione ’09 takes a break while producing a livestream for Live Nation's Twitch Channel featuring the group EARTHGANG at the Buckhead Theatre in Atlanta this past August.

After composing a piece of music for her CAL senior thesis, graduating and working for the television network AXS TV, she decided to become a freelance producer. Now she travels the globe working as a sort-of air-traffic controller during concerts and sporting event broadcasts, coordinating audio engineering, graphics packages, live feeds, commercial breaks and more.

“You can only broadcast one act at a time live, obviously,” she explains. “It becomes a puzzle to figure out who we can play, and when. Some artists have licensing agreements where you have to play them live on air. You go through the set lists. You track the songs. A puzzle.”

“Once I did a festival in Washington state,” she remembers, “where the wind was so bad they couldn’t put any artists on stage at all. We had to fill four or five hours with content from the day before, while they waited for the wind to die down.”

Artists, legal issues and other factors can also change a solid game plan at a late juncture.

“You have to keep your cool,” Vecchione explains. “I’m often told that I am calm under pressure.”

As the COVID-19 pandemic accelerated during the spring of 2020, Vecchione saw her festival circuit work dwindle to none. Within a few months, however, live streams of virtual concerts began to pop up — and she was in demand again.

“I went to L.A. for a bit,” she says, “which often meant sitting in the back of an empty concert hall or studio, clapping for a well-known act playing to no audience other than our small crew!”

She also picked up remote work as a production coordinator on documentary series, and sometimes remotely assisted corporations live-streaming events such as annual meetings. Increasingly, Vecchione also finds herself working as an associate director on events such as surf competitions with the World Surf League. She continues to enjoy the freedom and flexibility her career brings.

“I can get a call from someone last-minute to fly across the country, or even to another country,” she says, “and I can say, ‘Sure, I can do that, sounds great.’

“Freelancing in this field has given me the opportunity to work some amazing events — and to realize my dreams of working in music and television.”