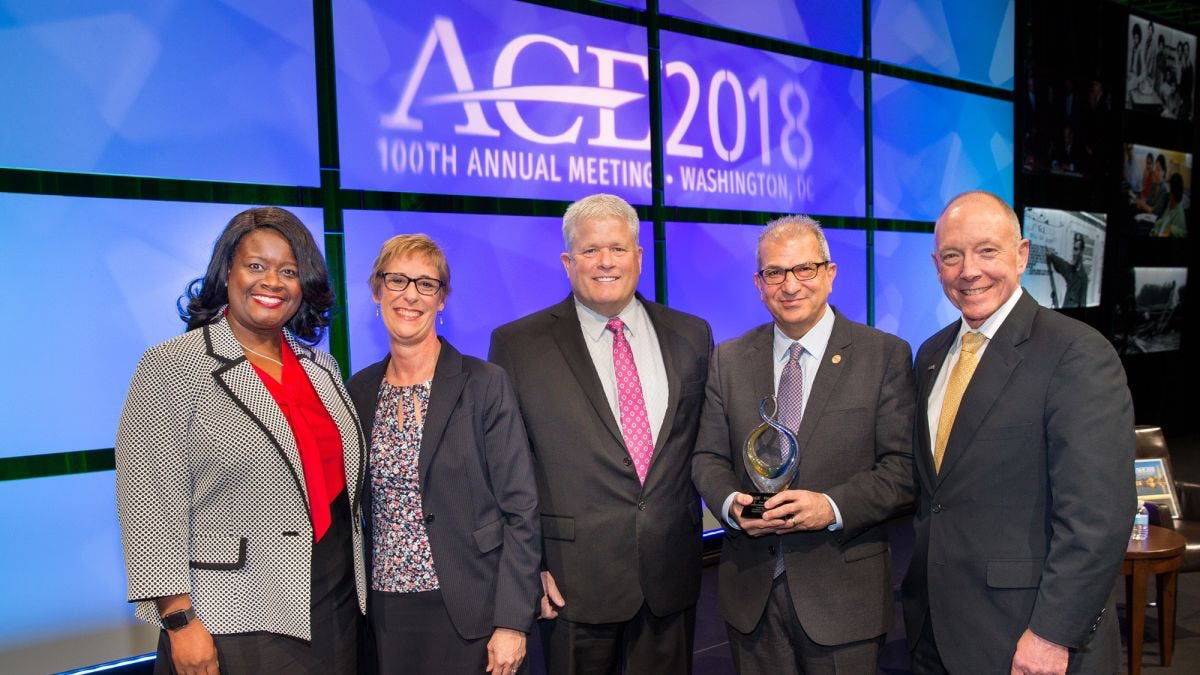 The award was created to recognize institutions that have responded to higher education challenges in innovative and creative ways and achieved dramatic changes in a relatively brief period. ACE invited nominations and applications for the award, under two categories, from any U.S. college or university eligible for ACE membership. Stevens won for the category of large institutions serving student populations of 5,001 or more and will receive a $10,000 prize.

“The demand for a Stevens education has never been higher,” said President Farvardin. “With the continued commitment of the university community, the potential of Stevens is limitless. On behalf of Stevens Institute of Technology, I am honored to accept the 2018 ACE/Fidelity Investments Award for Institutional Transformation during this catalytic period in our history.”

The unprecedented growth and accelerated success at Stevens began in 2011, when President Farvardin spearheaded the development of an ambitious 10-year strategic plan that charted the course for Stevens to become a premier, student-centric, technological research university. The process itself was deliberately inclusive—led by two deans, a steering committee with broad representation, six working groups comprised of faculty, staff, students and alumni, and multiple opportunities for input and feedback from all stakeholders within the Stevens community.

The results have been remarkable: undergraduate and graduate applications are up 156 and 128 percent, respectively. Enrollment is up 29 percent at the undergraduate level and 24 percent at the graduate level. Retention, graduation and placement rates have increased to 83, 95 and 96 percent, respectively, which represent all-time records for the university. Financials, fundraising and the endowment have also all seen drastic improvements.

Since Farvardin took office, the disciplined implementation of Stevens’ strategic plan has kept the university on course, requiring high levels of cross-functioning engagement, re-envisioning objectives, clear metrics and regular monitoring and reporting. Milestone tracking and specific metrics reveal a university that has experienced a substantial turnaround during that five-year period—a university on the rise.

Saint Peter’s University, also in New Jersey, won in the category of institutions serving student populations up to 5,000.

“Stevens Institute of Technology and St. Peter’s University both illustrate how addressing issues head-on—plus a lot of hard work and collaboration—can help transform an institution,” said ACE President Ted Mitchell. “We appreciate the generous support of Fidelity Investments for this award, which allows us each year to recognize colleges and universities where such transformation has occurred.”

Stevens is ranked 69th overall in U.S. News' 2018 National Universities rankings, up from 71st in the previous year and 88th in 2011, making Stevens the second fastest-rising college in the nation among the top 100 national universities. Stevens was named as one of the top 25 "Most Innovative Schools" in the nation in U.S. News' Best Colleges 2018 rankings.

About the American Council on Education (ACE)
Celebrating its centennial in 2018, ACE is the major coordinating body for all the nation's higher education institutions, representing nearly 1,800 college and university presidents and related associations. It provides leadership on key higher education issues and influences public policy through advocacy. For more information, please visit www.acenet.edu or follow ACE on Twitter @ACEducation.