Grist from the Mill

Welcome to the New Stevens.edu and Indicator Microsite!

A headless CMS will optimize the presentation of Stevens content across a wide variety of channels and devices. The new website also reflects Stevens’ new brand identity, an improved experience and an enhanced digital home for The Stevens Indicator. Access cover stories, features, departments and alumni log PDFs all in one place here on The Indicator’s dedicated microsite. 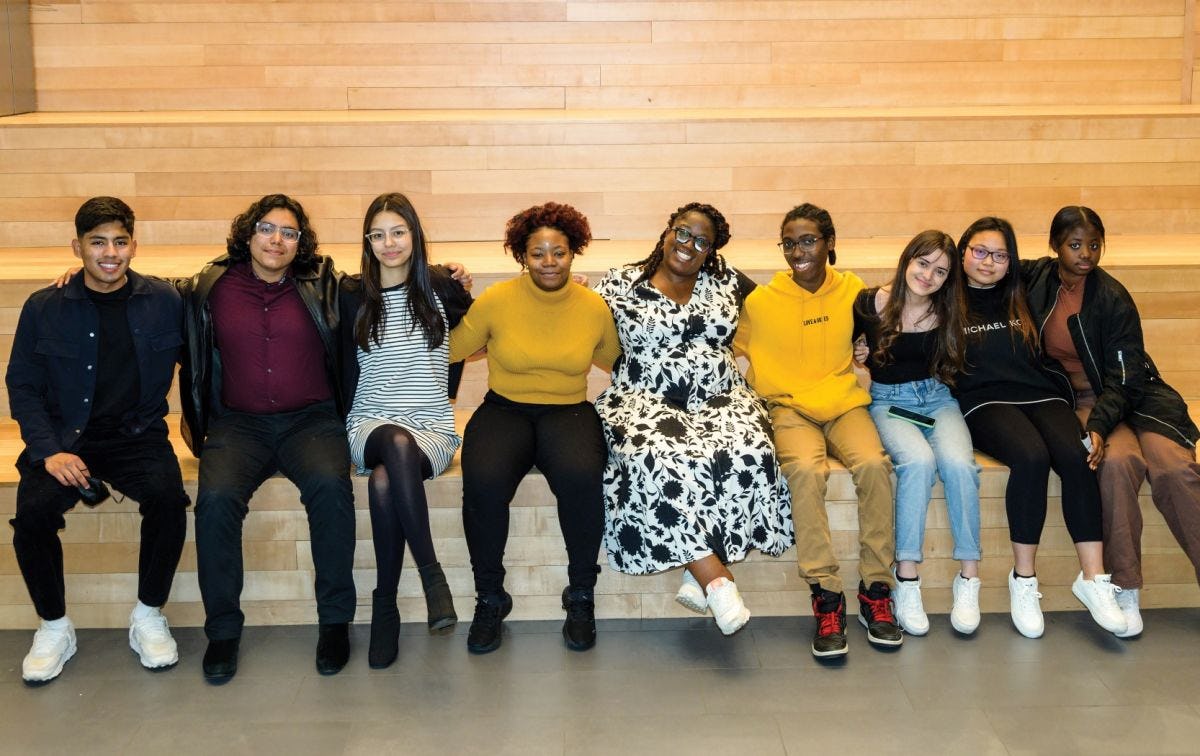 Stevens’ Art Harper Saturday Academy celebrated the graduation of its first cohort of 11 high school seniors on April 23, 2022. Named for Art Harper ’78 and launched with the support of Nate Davis ’76 in 2019, the Saturday Academy is a multi-year program created to inspire and prepare local high school students from underresourced communities to pursue post-secondary education and careers in STEM-related fields.

In their final year of the program, seniors took an applied math course and explored rotating engineering topics, including robotics, biomedical engineering and environmental engineering. Almost all graduates from the program’s inaugural class will be attending a four-year college or university, and more than half plan on majoring in STEM fields. 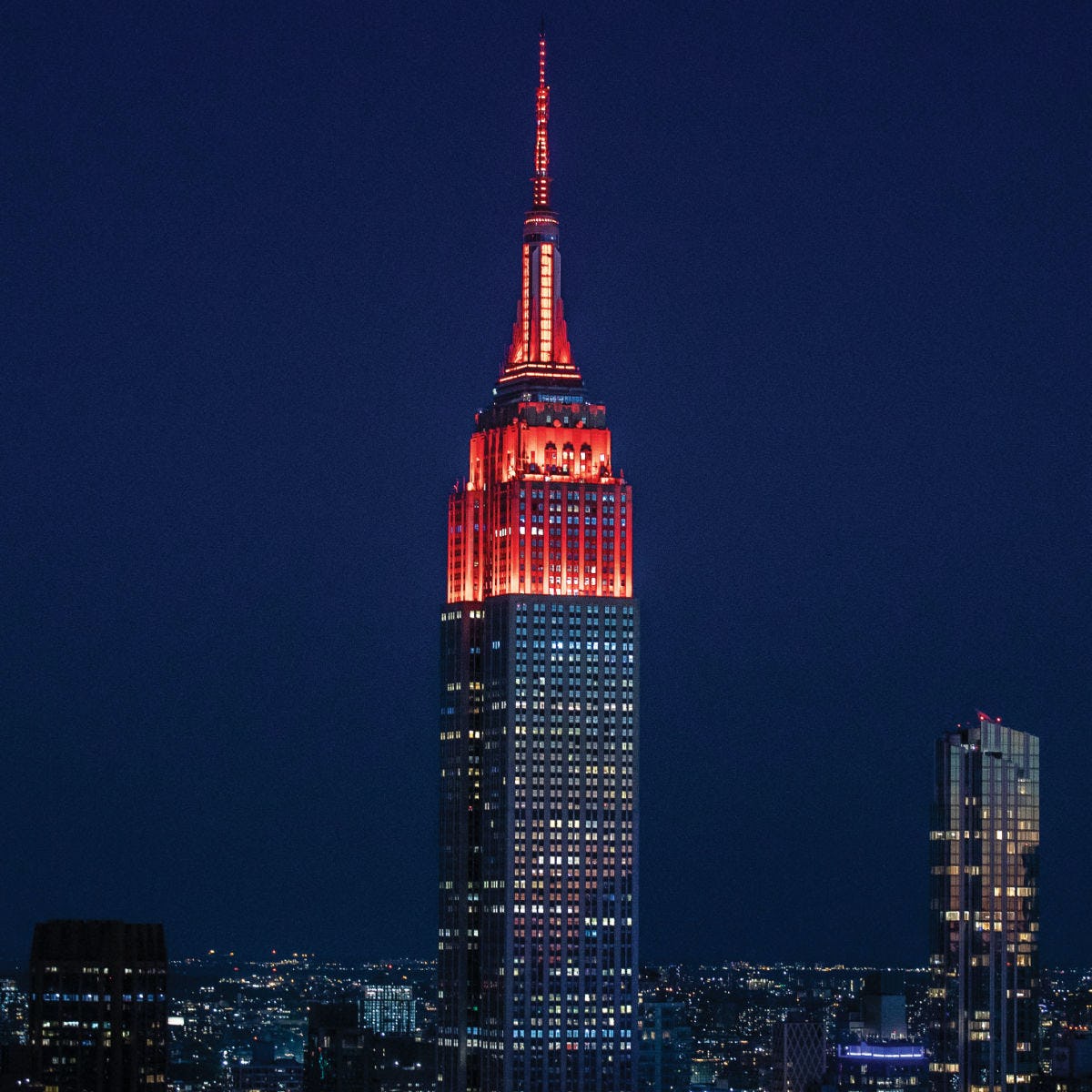 The inaugural Fall Festival in September was a multi-day celebration, with athletics, campus tours, food trucks, the Athletic Hall of Fame induction, even a musical comedy. Its glorious culmination: when the Empire State Building's tower lights shone in "Stevens red."

What Is ‘Green’ Energy Worth to You?

When it comes to green energy, Americans generally fall into one of four categories: Evangelists, Promoters, Passives or Detractors. No matter what our category or view of green energy is long-term, however, few are willing to pay much more to take advantage of it.

These findings and more appear in the Stevens TechPulse Report: Green Energy Perceptions and Usage, a new national poll of 2,210 adults conducted on behalf of Stevens by Morning Consult that examines Americans’ views on a wide range of green energy-related issues.

Read more about the survey and its findings.

QPhoton will now operate as a wholly owned subsidiary of QCI, with Huang joining QCI as a director and chief quantum officer. The companies have worked to jointly develop, market and sell quantum and photonic products, solutions and services including ready-to-run, full-stack quantum systems. 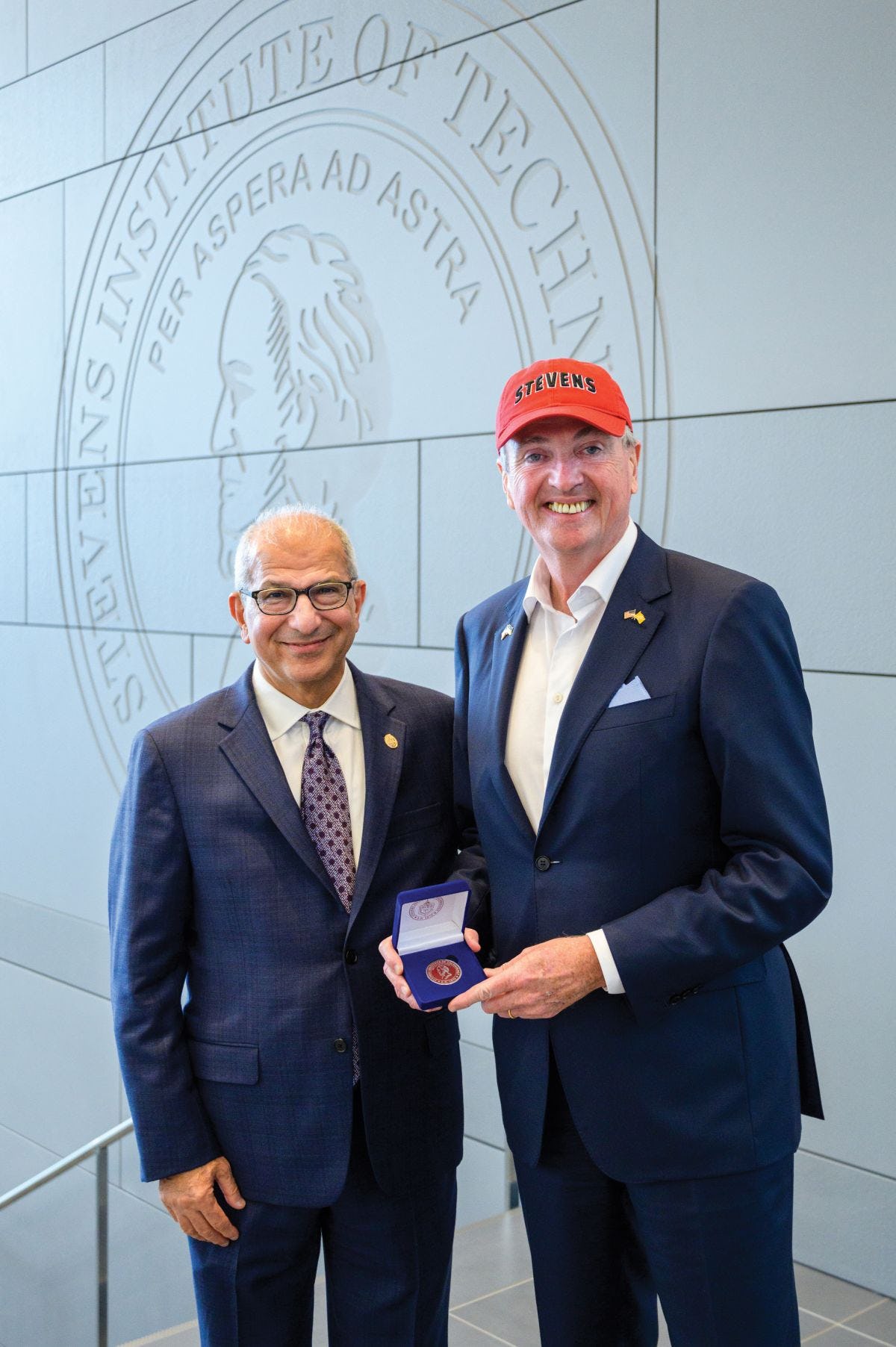 New Jersey Governor Phil Murphy visited Castle Point in August to meet with Stevens President Nariman Farvardin and tour the new University Center Complex. Much has changed since Murphy’s last visit to campus in 2018 — President Farvardin filled him in on Stevens’ incredible trajectory as well as exciting opportunities in research and economic development in areas like fintech and quantum.

“Our state is stronger because of Stevens’ leadership in, and dedication to, technology and entrepreneurship,” said Governor Murphy, following his visit. “Stevens graduates are the STEM leaders of the future, creating the talent pipeline for New Jersey’s innovation economy that is attracting new businesses to our state. Moreover, many graduates will continue to live and work in New Jersey, further contributing to our vivid fabric.” 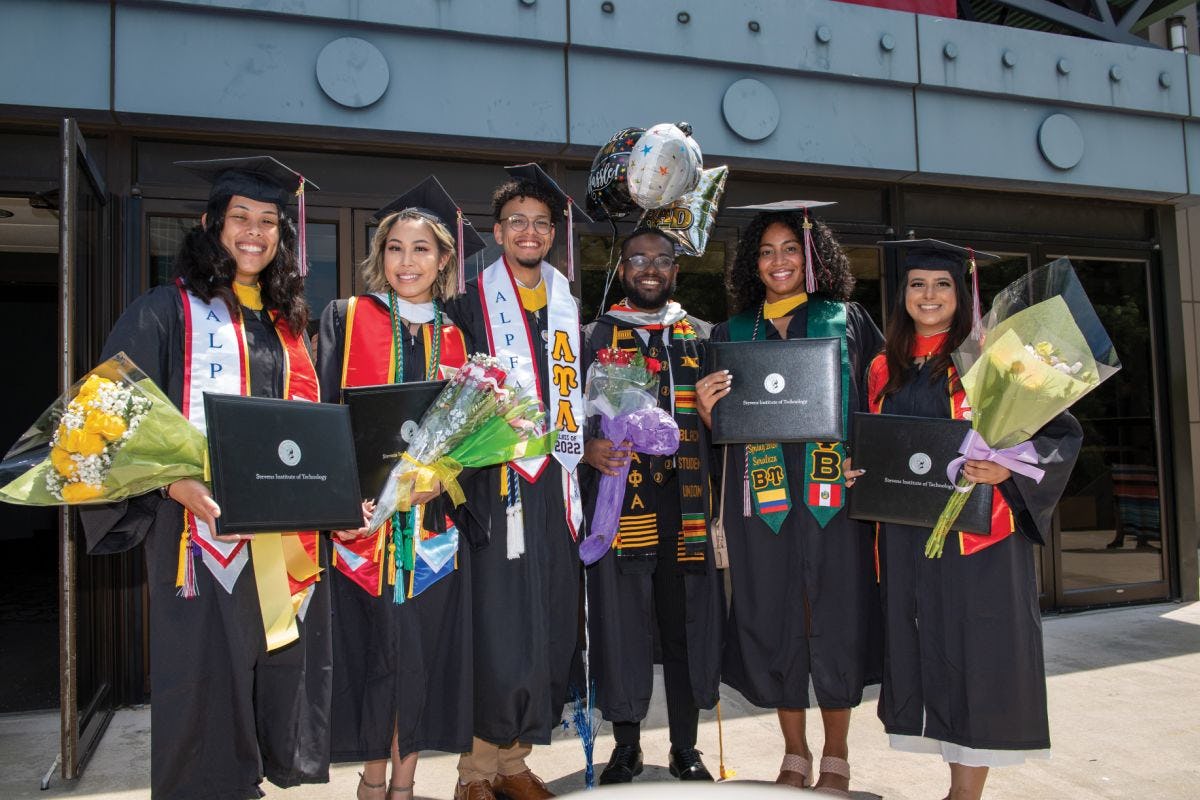 Stevens held four commencement ceremonies over two days this past spring — two for undergraduates on May 25, and two for graduate students on May 26 — at the Meadowlands Exposition Center in Secaucus, New Jersey. More than 850 candidates received their undergraduate degrees, while nearly 1,000 students received graduate degrees and certificates. Thousands of family members and friends gathered to celebrate the graduates, along with Stevens faculty, staff, alumni and two all-star Commencement speakers.

American inventor and entrepreneur Dean Kamen delivered the graduate Commencement speech and was awarded an honorary doctor of engineering degree.

Read more about the ceremonies and honorees. 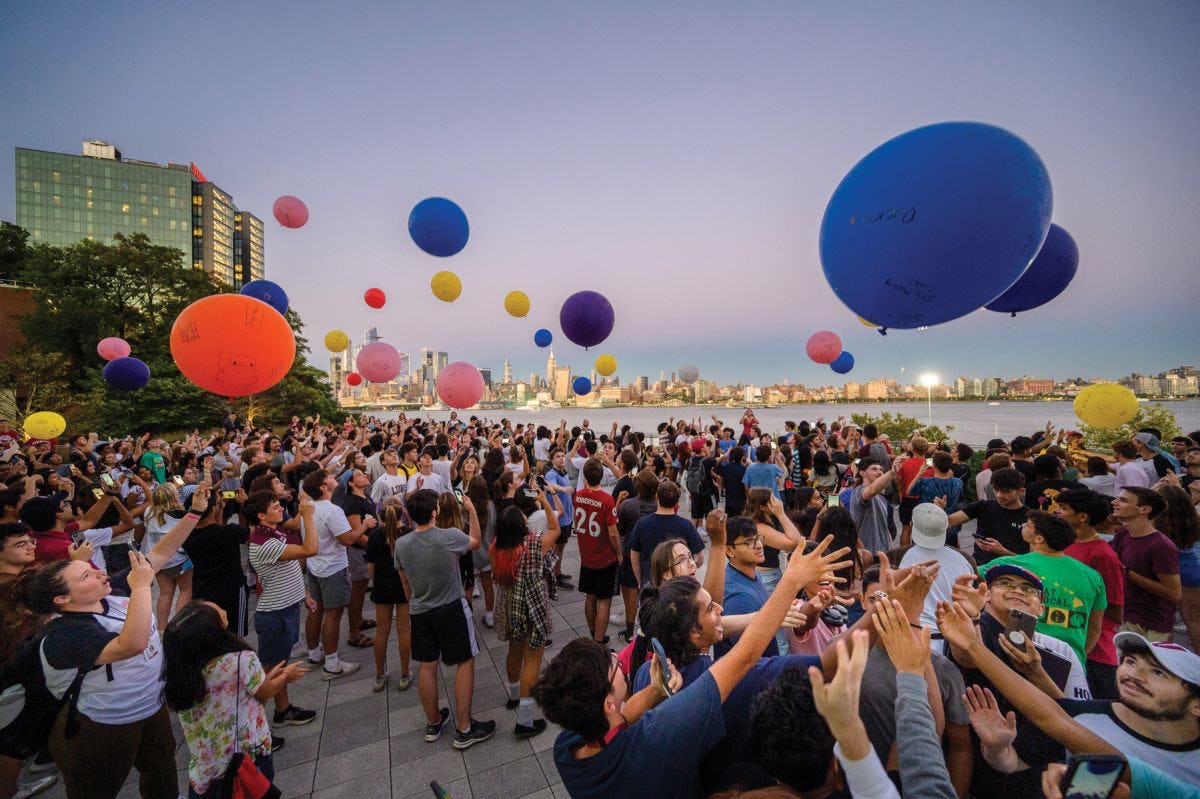 Stevens received a record 12,500 applications for undergraduate admission this past year (a 10% increase over last year’s record-setting number). The incoming Class of 2026 is 1,074-strong* and the most academically distinguished in Stevens’ history, with an average SAT score of 1441. Representing 35 states and 18 countries, approximately 37% of Fall 2022 first-year students are women, up from 33% the previous fall. Nineteen percent of enrolled first-years come from traditionally underrepresented backgrounds and almost 20% of the class identifies as first-generation college students.

The demand for Stevens graduate programs also set university records, with applications surging by 24% over last year. More than 2,000 new graduate students enrolled this year, increasing Stevens’ graduate population to about 5,100 students — a 20% increase over the previous year.

*Reflects data at time of publication.

As Stevens’ vice president for enrollment management, Cindy Chin ’05 M.S. ’05 will oversee the Undergraduate Admissions and Financial Aid offices and the Pre-College Summer Programs. She previously served as an associate provost at Stevens.

The Financial Times interviewed Stevens’ School of Business Associate Professor Stefano Bonini about the future of Twitter’s board as Elon Musk pursued his takeover of the social media platform. The article, “Twitter Board in a Bind as Elon Musk Makes His Move,” was published on April 22, 2022, and was picked up by Ars Technica.

Alex Wellerstein, a nuclear historian and associate professor at Stevens’ College of Arts and Letters (CAL), spoke to The New York Times about the contributions of African American workers to the Manhattan Project in an article, “A Secret City With a Secret African American History,” published on June 11, 2022.

The Washington Post interviewed Philip Orton, research assistant professor of ocean engineering at Stevens’ Davidson Laboratory, about evolving port infrastructure in an article, “Rising Seas Are the Next Crisis for the World’s Ports,” published on July 18, 2022.

Philip Odonkor, an assistant professor at the School of Systems and Enterprises at Stevens, spoke with Time about how the successful adoption of green technologies is dependent on the cost to consumers. The article, “What Experts Say About How Valuable The Inflation Reduction Act’s Green Subsidies Will Be,” was published on August 12, 2022, and references Odonkor’s findings featured in the latest Stevens TechPulse Report.

Ann Murphy, an associate professor at Stevens’ School of Business, spoke with Fortune to discuss the financial bump often seen by companies when a Black leader takes the helm. The article, “When a Black CEO is Appointed, It Benefits the Company’s Stock, According to New Research,” was published on September 21, 2022.