You Can Travel to U.S. National Parks Without Ever Leaving the Room, Thanks to This Stevens Senior If you join senior Maxwell Smith in the SCENE Lab over in the College of Arts and Letters, you might feel like you’re in Yellowstone National Park. Or hiking through the Smoky Mountains.

A Music and Technology major from Cream Ridge, NJ, Smith took a road trip last summer to the Badlands in South Dakota and Yellowstone National Park in Wyoming, traveling with a battery-powered digital recorder and built a collection of stereo and 4-channel field recordings. He continued on throughout the year to the Smoky Mountains in Tennessee and the Daniel Boone National Forest in Kentucky, as well as other state parks in New Jersey.

Smith recorded all different types of sounds like waterfalls, prairie dogs and frogs throughout multiple days of hiking and camping, which he then used to design an immersive environment for virtual reality. Using Unity game engine, a free 3D game creation software, he created an interactive landscape that evolves as the player moves through it. 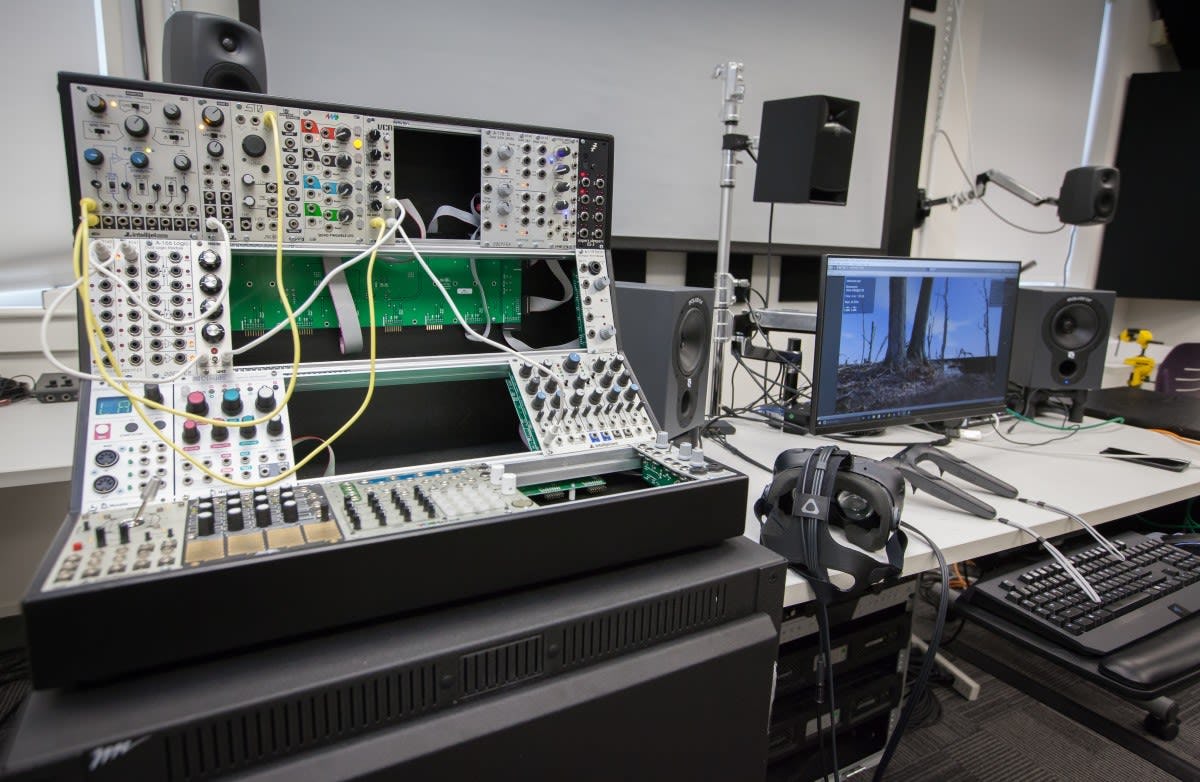 Maxwell Smith developed his senior design project inside the SCENE Lab, which is used for research in virtual and augmented reality.

This work transports the user to remote locations using sound and allows them to walk through a natural world without leaving home. Additionally, the project uses various methods of audio programming to create music that is based on the environmental soundscape. The result is a musical composition that evolves with the sounds of the winds, birds and trees that fill the environment.

“Virtual and augmented reality is undoubtedly becoming more and more popular in all forms of media, from video games to interactive art installations,” said Smith. “Mixing and crafting sound for 3D productions offers exciting opportunities for me as a sound designer, audio engineer, composer and programmer. It has allowed me to think about sound coming from above and below, while encouraging me to craft sounds that play with perception.”

This project is a culmination of all the various topics Smith has studied within the Music and Technology program. Courses like sound design and spatial audio inspired him to create immersive audio productions outside of music, while courses like software instrument design showed him the myriad possibilities of audio programming.

“I used the knowledge I gained from more traditional courses like music theory and composition to create musical material that makes sense in the context of this work,” Smith explained. “However, my background in audio engineering and environmental studies sparked my desire to work with environmental recordings in this way, and the amazing technology at the SCENE Lab here at Stevens has enabled me to explore this area in ways I never imagined.”

After graduation, Smith plans to work as a freelance sound designer, audio engineer and programmer. “This project has rewarded me with a unique skill set that is becoming increasingly demanded across various forms of media production,” he said. “I feel confident leaving this program with highly technical and creative experience within a field I love and care about.”