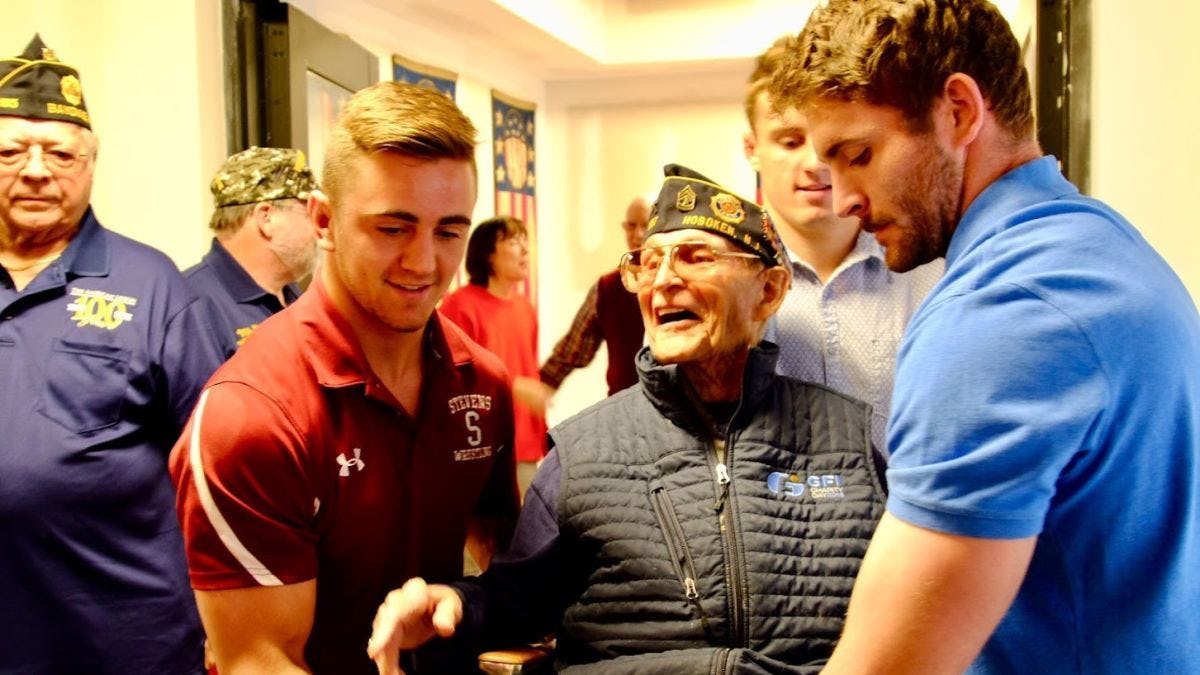 Brett Kaliner, left, Colin Myles, center, both Class of 2021, and Thomas Poklikuha '20 help decorated World War II and Korean War veteran Vincent Wassman up the stairs during a fundraising gala at the Hoboken American Legion Post 107 in May. Wassman, who

Always tuned in to the needs of others, School of Business Distinguished Industry Professor Don “Doc” Lombardi challenges his students to help those in need, whatever they need. Whether innovating the Heart-to-Heart Visiting Nurses Association Health Group - Stevens Initiative during Hurricane Sandy, where Doc and several students distributed food and clothing to displaced victims of the storm, or developing the SATMax program, which helps high school students from underprivileged backgrounds prep for the SAT, the work embodies one of Doc’s many lessons: “If you take care of others, you take care of yourself.”

As a veteran of the Marine Corps, Doc takes a special interest in active duty and veteran students, as well as veterans’ issues. This past summer, two projects under the Stevens Summer Community Outreach, Development and Engagement (CODE) program directly benefitted veterans.

A continuing project helps Vets4Warriors, a national hotline for service people and their families to contact in time of need based out of the Rutgers University Behavioral Health Care National Call Center in Piscataway, New Jersey.

A Stevens team worked to re-engineer the Counselor’s Laptop Resource (CLR) System, which makes it easier for counselors answering the calls to track where the calls are generated and direct the caller to the best and nearest resource.

“This small team of counselors are taking about 7,000 calls a month and adding 13 more each day on average,” alumni leader Austin Cawley-Edwards ’18 says. “We started by meeting with [Retired Major] Gen. [Mark A.] Graham, a two-star general who is incredibly nice, and then began a dialogue with the counselors themselves.

“While we work to formalize the developed prototype, we’ve built a spreadsheet with more than 3,500 resources nationwide that counselors can refer callers to in their local areas.”

The team is also working to find ways to cut operating costs while building the organization’s ambassador network. “We’re researching marketing and advertising tactics in an effort to expand the LinkedIn community for more volunteers to actively participate,” Will Reed, Class of 2021, says.

On another project, students took up the cause of homeless veterans by helping on a project developed by the American Legion Post 107 in Hoboken, New Jersey. Destroyed during Hurricane Sandy, the Legion’s headquarters were rebuilt to include a community center as well as six private apartments and a common lounge and library. Residents, who are registered homeless veterans of Hudson County, moved in during July.

“We’re outfitting the library with books and computer equipment for the residents to use,” says Thomas Poklikuha ’20. “Along with that, we’re helping put on fundraisers for the shelter.”

One such fundraiser, a gala that took place in May, raised roughly $50,000 to put toward the home. “The students from Stevens were beyond helpful this year,” says John Carey, commander of Post 107. “We're always looking for more veterans to join our Post and now that the project is up and running, we have a great space to offer our veterans the resources they're looking for."

While helping Lombardi is a major draw for the students involved in these projects, some have other connections. Cawley-Edwards saw many of his friends join the service after high school, while Reed’s grandparents and Poklikuha’s father are veterans.

“We’re a part of this community and we want to make it as friendly and comfortable as possible. This is good for the veterans we’re helping, but it’s good for us, too,” Poklikuha says.