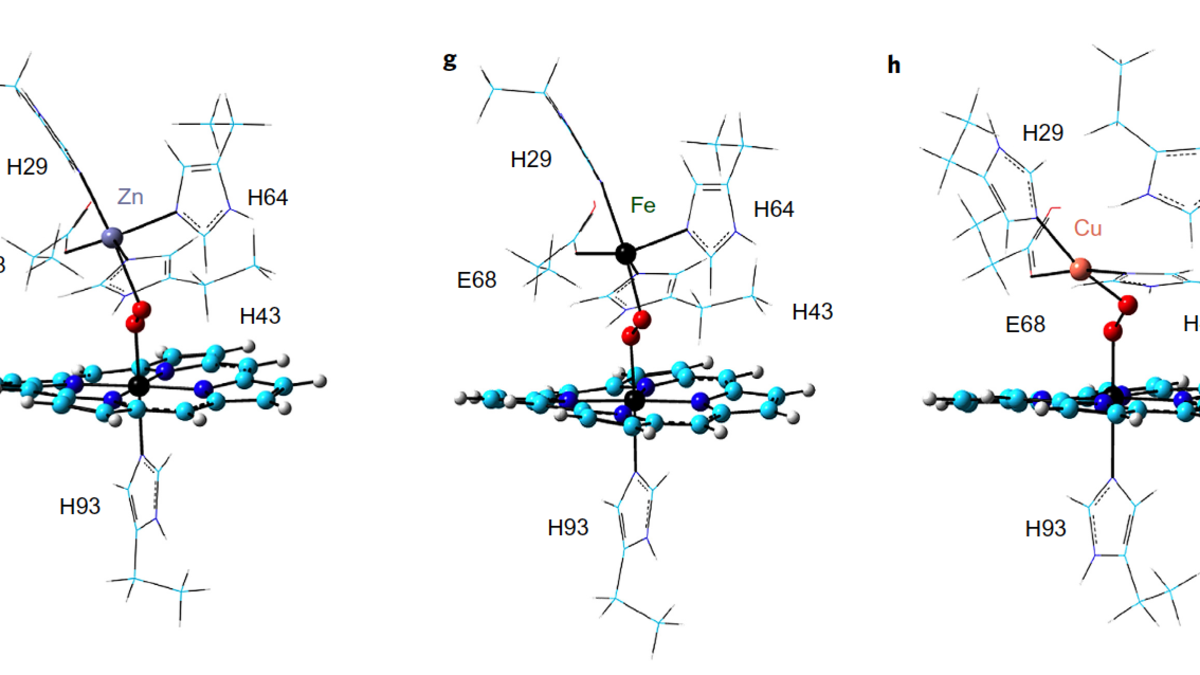 Working with the University of Illinois, Professor Yong Zhang could be at the forefront of creating biomimetic alternate energy solutions

“Computational chemistry can be used not just to explain something we already know,” says Stevens Institute of Technology professor Yong Zhang. “Sometimes, it can help discover new things.”

Zhang, a chemistry and computational and medicinal chemistry professor in the Department of Biomedical Engineering, Chemistry and Biological Sciences at Stevens, has done exactly that. His work revolves around creating theoretical models to understand actions of biosynthetic models of the heme-copper oxidase protein—a molecule that every oxygen-breathing life form uses to survive. That work has not only replicated current lab results; it’s filled in their gaps. It’s also attracting lots of positive attention, including publication in the field’s two most prestigious journals: Nature Chemistry and Angewandte Chemie International Edition.

The protein catalyzes the reduction of oxygen to water, producing adenosine triphosphate (ATP). ATP is known in biology as energy currency because it stores energy. The phosphates in the ATP molecule will donate a phosphate, releasing energy and allowing molecular chemical reactions like heating or digestion to take place to happen within living organisms. Zhang studies the processes by which the molecule does this. By doing that, he is able to help his colleagues better understand how it works.

One way he’ll be able to do that is through understanding “why copper is better than other metals in oxygen activation,” as he states in the Nature Chemistry paper. Heme is part of the myoglobin protein, which carries oxygen from our lungs into our bloodstream via red blood cells. The heme is two-sided: one side has an iron-containing heme molecule, and it uses that iron to activate oxygen; the other, non-heme side can bind with multiple metals to activate oxygen. Copper is the most common metal used for that purpose.

Researchers under Dr. Yi Lu at the University of Illinois (UI) designed a protein that’s smaller than a normal sized heme copper oxidase to figure out why.

That’s where Zhang’s models came in.

“We can build more models in a computer that don’t depend on chemical reaction time,” Zhang explains. Working in collaboration with the UI team, Zhang and his team at Stevens used x-ray structures of their proteins to create computer-generated ones, taking care to replicate the same molecular environment. Once the model was accurate, the Stevens team ran multiple scenarios with zinc, iron and copper. They discovered that copper is so effective because it creates the longest link—and biggest weakness—in oxygen. That’s what activates it for product formation and energy releasing.

Figure 1 | Structure and function of FeBMb variants with DFT-optimized structures of oxygen-added Zn-FeBMb (f), Fe-FeBMb (g) and Cu-FeBMb (h). The porphyrin is shown in cyan, whereas the oxygen molecule and metal ions are shown as spheres. CREDIT: Nature Chemistry.

As these models show, oxygen is gaining more electrons in its outer layer. Molecularly speaking, those extra electrons have to come from somewhere. Zinc can’t donate electrons. Iron can’t donate many, which is consistent with its relatively inferior oxygen activation results in other experiments. But copper—which has 9 electrons in its outer ring—can. The more electrons there are in the outer layer of a molecule, the weaker the bond. That’s called antibonding, and you can clearly see it in the model on the right. “That’s the power of quantum chemistry,” Zhang said, “and we were able to show that in this model.”

Those results also directly matched the ones from the physical molecular UI models, which Zhang further explained:

“We also showed that the copper model automatically adopts a significant structural change by leaving one bound amino acid out when it transfers electrons to oxygen. That makes it more stable and creates more space for optimal subsequent reaction steps, while that bound amino acid can remain bound in the calculated model when oxygen is not present, as found experimentally. In our calculations, we can get all these features in one place."

Again, by understanding the effectiveness of copper in this molecule, researchers will be able to engineer biomimetic alternative energy applications based on that reaction due to Zhang’s work, as the paper explains: “This collaborative work resolves a long-standing question in bioenergetics, and renders a chemical-biological basis for the design of future oxygen-reduction catalysts.”

While the Nature Chemistry paper focused on the non-heme side of the protein, the Angewandte Chemie paper covers the flip side of the molecule. As Zhang explains, this research explores the “effect of heme redox properties on oxygen bound to heme center using density functional theory.” That means he and his team were looking at the heme substance and how it can affect oxygen binding.

This was also prompted by the UI team. Current research states that the increased oxygen binding in case of higher heme redox potential is because such heme possesses a more positively charged iron, which binds stronger to an electron-donating ligand like oxygen. In the studied heme protein, there are chemical moieties with more electrons in its outer layer. That’s called electron-withdrawing groups, because they would draw electrons from the heme site. This group, when added to the heme side of the molecule, can enhance reduction potential… but it also increases oxygen disassociation. Researchers aren’t sure why. And that’s why the UI team turned to Zhang to find an answer.

Again, Zhang and his team designed similar models based on UI’s work and started three different systems. They noticed that when oxygen binds with heme center it takes two general forms: neutral oxy or super oxy (oxygen gets one electron from Fe to become negatively charged). Both forms have samekind of change, and the heme molecule can switch between them with very little energy.

The Stevens team first found that the super oxy form is more stable, which is consistent with previous research. But as they ran more simulations they discovered that the neutral state was closer to the disassociated state, making oxygen molecules easier to release in this form. “When there's more of an electron-withdrawing group, we found that oxygen donates a little bit of electrons to the heme iron, making oxygen less negatively charged,” Zhang said. “In the dissociated form, oxygen is neutral, so that change draws the originally negatively charged oxygen closer to the neutral or released stage.” That creates increased dissociation, meaning the increased reduction potential of oxygen molecules helps the heme be more prepared for the release stage.

The goal of all this research is to not only provide insights into nature, but also use that knowledge to create biomimetic solutions for alternative energy. “If we can learn from these models, we can design something better,” Zhang said.