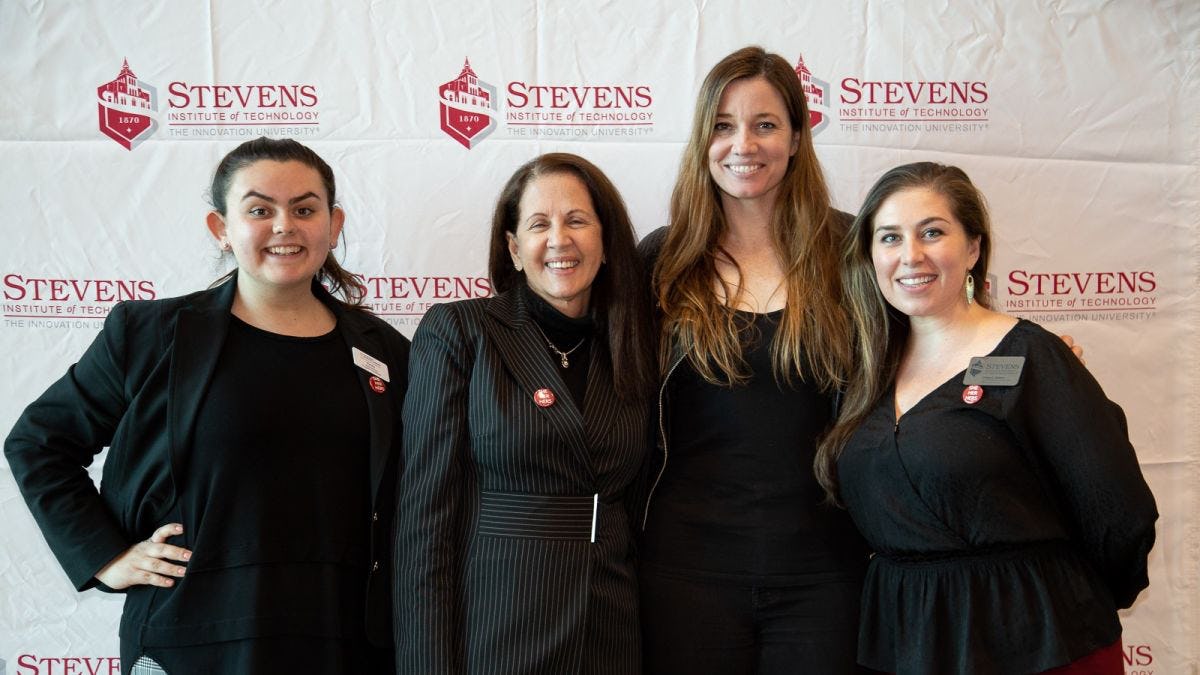 At the 2019 LeadHERship Conference at Stevens Institute of Technology on November 16, students, alumni, faculty and staff participated in a day-long conference that featured inspiring lectures from women leaders in STEM, networking opportunities and multiple workshops conducted by faculty, staff and guests on topics that included "Getting the Mentoring You Need to Succeed" and “Science-Based Practices to Help Women Thrive in the Workplace." 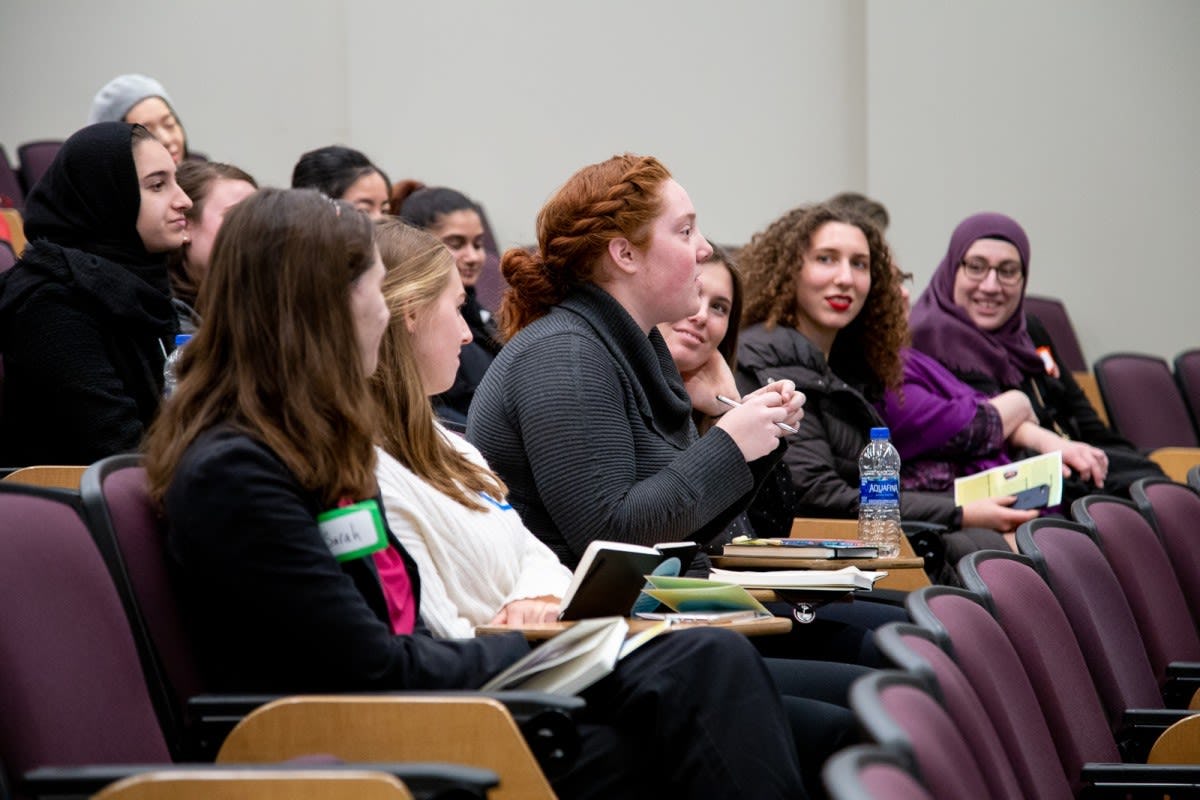 “The speakers we heard from today were inspirational and made me realize how far we have come and how far we still need to go. For me, the LeadHERship Conference is about how we get to gender equality in the STEM fields. And that’s by each of us standing up for ourselves, our abilities and one another,” said Sarah Bertussi ’21, a mechanical engineering senior who has attended every LeadHERship conference since it launched in 2016.

Emily Kovelesky ’21, one of the student leaders involved in organizing the event, spoke about the value in hearing how others overcame challenges to achieve careers that tapped into their passions and interests.

“These insights and words of motivation are wonderful to hear as a student who is still trying to figure it all out, and I am grateful for the opportunity to share this experience with my peers at the conference,” Kovelesky said.

In her conference welcome remarks, Liliana Delman, assistant director for diversity education at Stevens, emphasized the inclusive mission of the event. 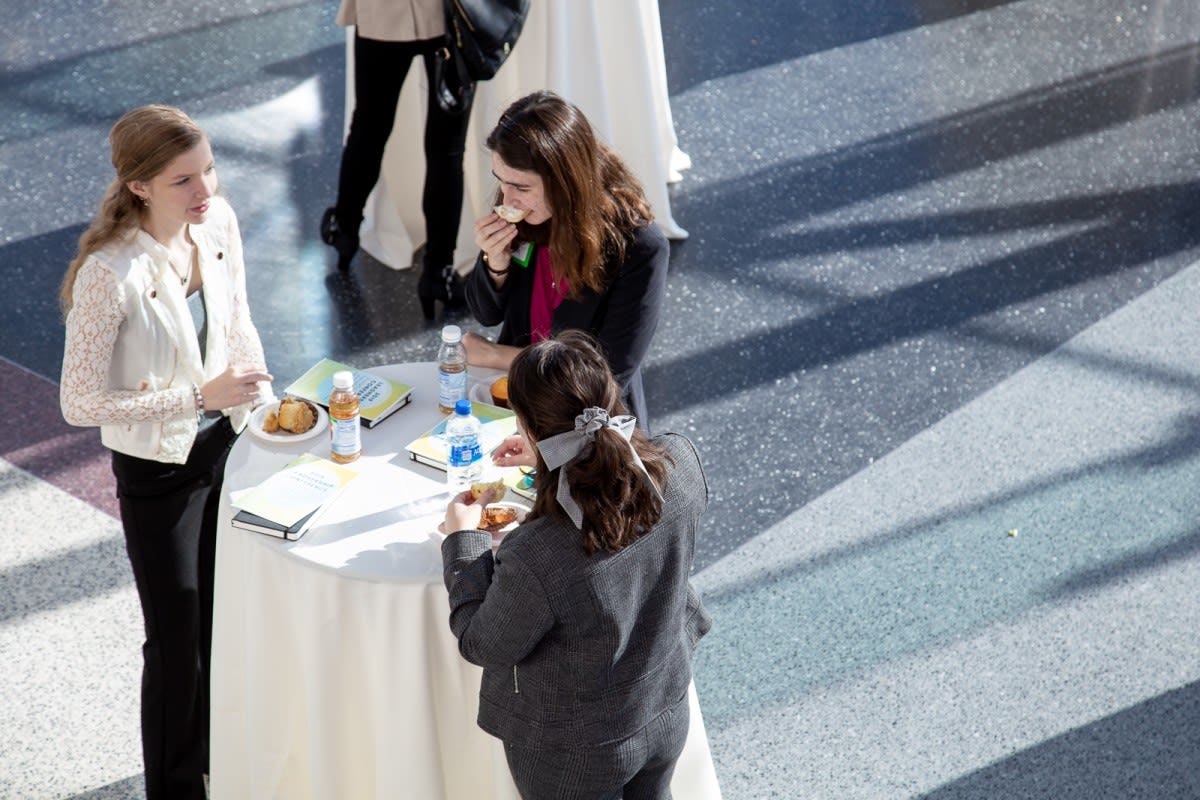 “The LeadHERship conference is an opportunity open to all Stevens community members, in which we seek to promote and amplify the voices of women and gender minorities in STEM. The conference brings together individuals from diverse backgrounds and experiences for a day of motivation, networking, skill-building and professional development,” Delman explained.

Her tips for a successful conference experience? To keep an open mind, have fun, and meet at least one new person to follow up with after the event.

Alumna’s opening remarks reflect on Stevens’ past, present and future

Stevens alumna Malena Higuera '75, a member of the first class of women admitted to Stevens when the university became coed in 1971, kicked off the event with a poignant reminder of what the world was like for women when she and her female colleagues made history at Stevens and other universities around the country nearly five decades ago. 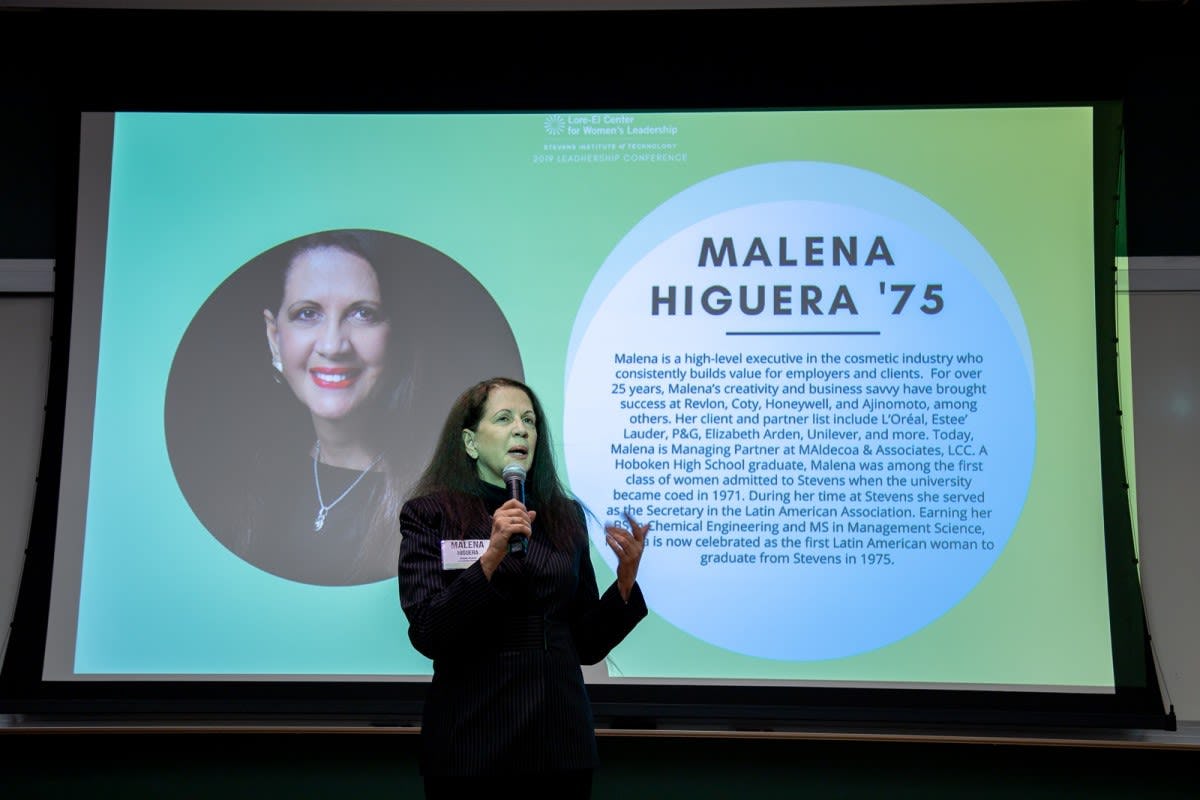 “We did not want to be labeled. We wanted to be students,” the Stevens alumna said emphatically.

She went on to earn a bachelor’s in chemical engineering and master’s in management science from her alma mater.

Now, a high-level executive in the cosmetics industry, Higuera is a managing partner at MAldecoa & Associates, LCC, and has worked with L’Oréal, Estée Lauder, P&G, Elizabeth Arden and Unilever during her long career of more than 25 years.

A graduate of Hoboken High School, Higuera shared how her Stevens education made possible a life and career she could never have imagined when she first learned that the once all-male university was opening its doors to women.

“Sitting in homeroom at Hoboken High, they told us that Stevens was accepting women,” she recalled.

Looking back 48 years ago, I could never have dreamed I would be standing here, welcoming you all here.”

And as she looked around the auditorium in Babbio Center, she remarked on the growth and evolution of the university that she graduated from in 1975 – noting the state of the art infrastructure, increased women students and significantly expanded course offerings and academic programs.

“Stevens today offers so much more than when I was here.”

Keynote speaker: ‘If you can dream it, you can make it happen’

Deanne Bell, too, left quite an impression on conference attendees with a keynote address that focused on the power of a science and technology-based education. 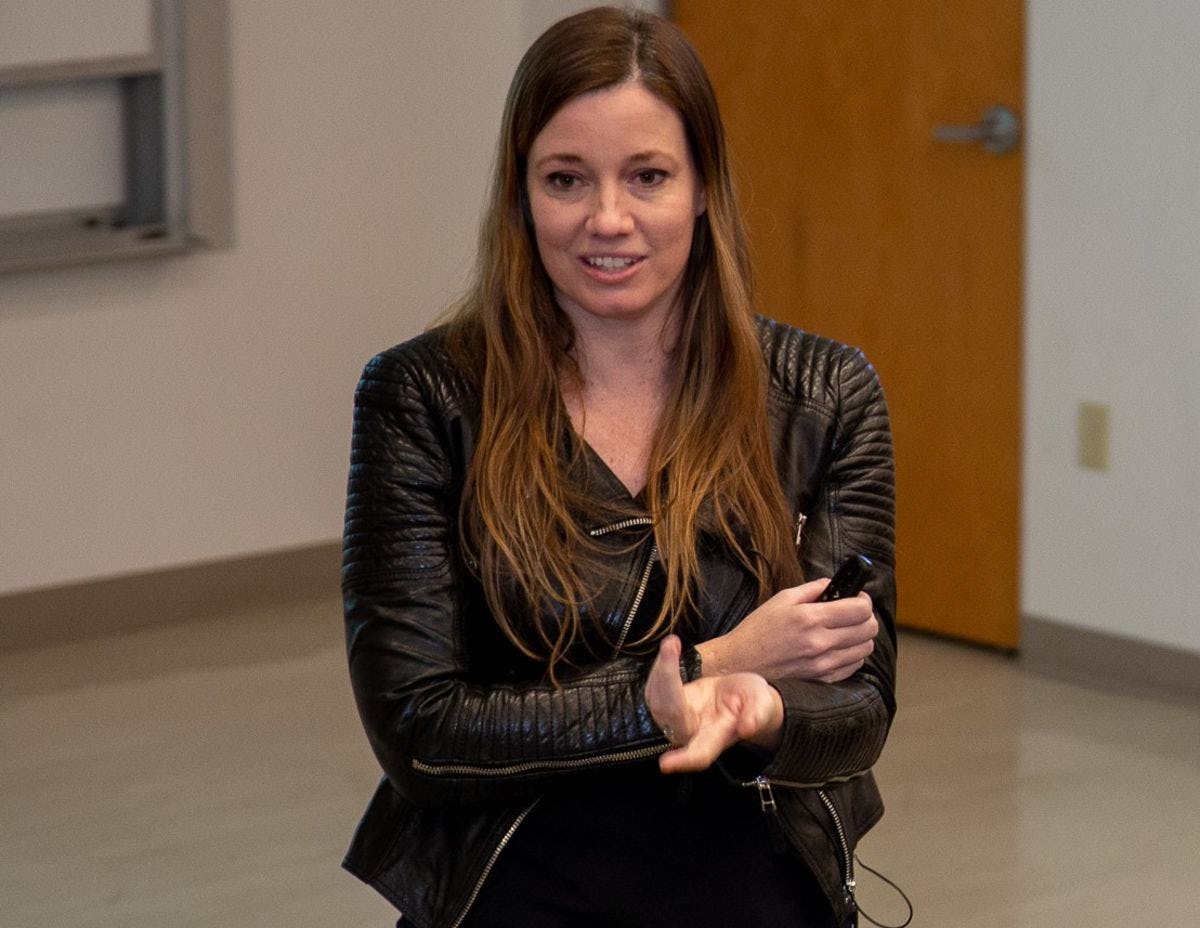 Bell, who holds a mechanical engineering bachelor’s degree, revealed having a “mid-college crisis” during her time at Washington University in St. Louis, caused by doubts she had about her choice of college major and career path.

Becoming an engineer, she feared, would come at the cost of setting aside her other interests and passions, which included travel, architecture and design. Luckily for her, a mentor assuaged those concerns, helping Bell to change her perspective about what being an engineer would mean for her professionally.

“I was so fortunate to have had a female mentor, someone who I had known since my freshman year,” Bell recalled.

“She said to me, ‘Deanne, are you kidding me? All that other stuff you do does not make you less of an engineer, it makes you more of an engineer. All those interests, hobbies and passions are going to inspire you to go out and innovate in this world.’”

Bell has been proving her mentor right ever since, navigating her career in ways that combine all of her varied talents and personal interests. She has hosted and produced television programs on PBS, ESPN, Discovery Channel, National Geographic, DIY Network, and most recently on CNBC as host of ”Make Me a Millionaire Inventor.” 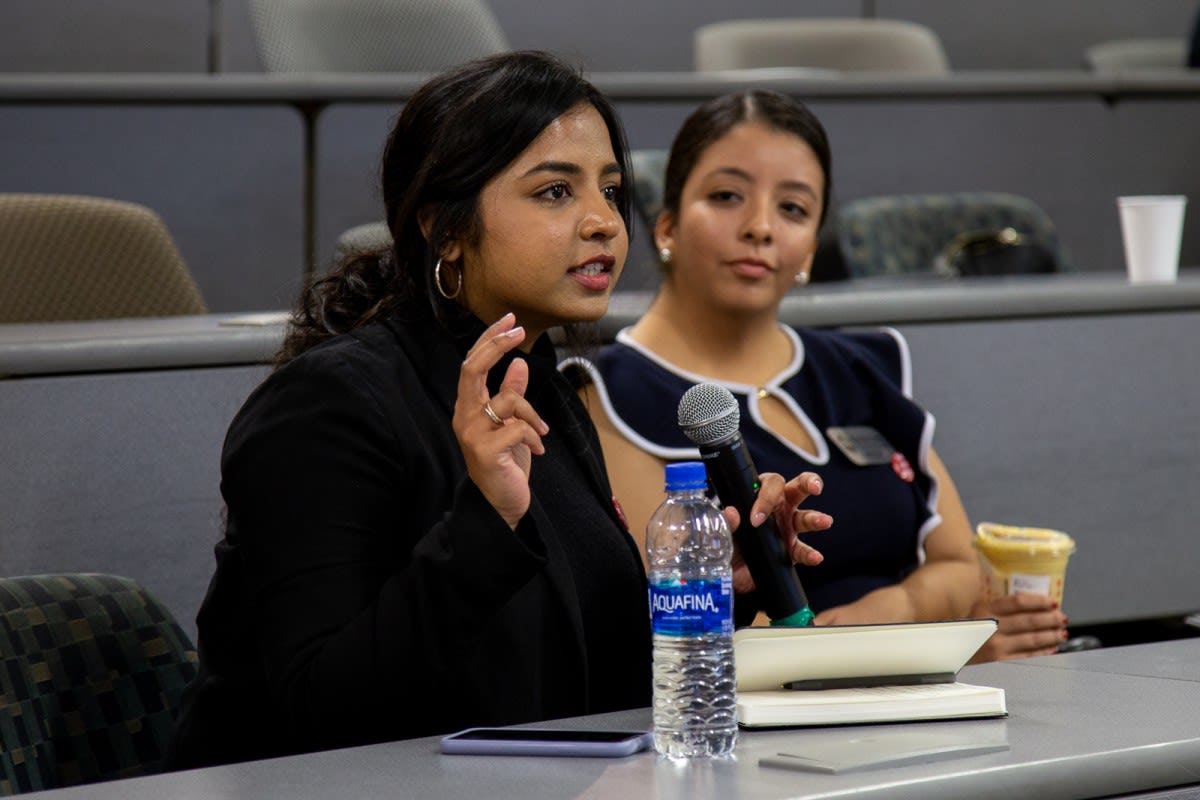 She is also the founder and CEO of Future Engineers, an education technology company that engages students in online contests and challenges. Her company has since become a U.S. Department of Education Small Business Innovation Research (SBIR) awardee, and was selected by NASA to host the Mars 2020 "Name the Rover” contest.

Her engineering background, she says, has been fundamental to all of her entrepreneurial and creative endeavors, enabling her to “dream big.”

“Engineers are some of the most creative people you will ever meet. Not only do they have the ability to hatch an idea on a napkin, they have the know-how to ask the right questions, find the right answers and turn that idea into reality,” Bell noted.

The LeadHERship Conference, co-sponsored by the university’s Lore-El Center for Women’s Leadership, Graduate Student Life and Diversity Education, was made possible with generous support provided by Dianne (Smith) Szipszky ’90 M.Eng. ’91 and the Office of the President, Diversity & Inclusion.

To learn more about the conference, visit stevens.edu/LoreEl.