The Party of Veterans: Democrats or Republicans? 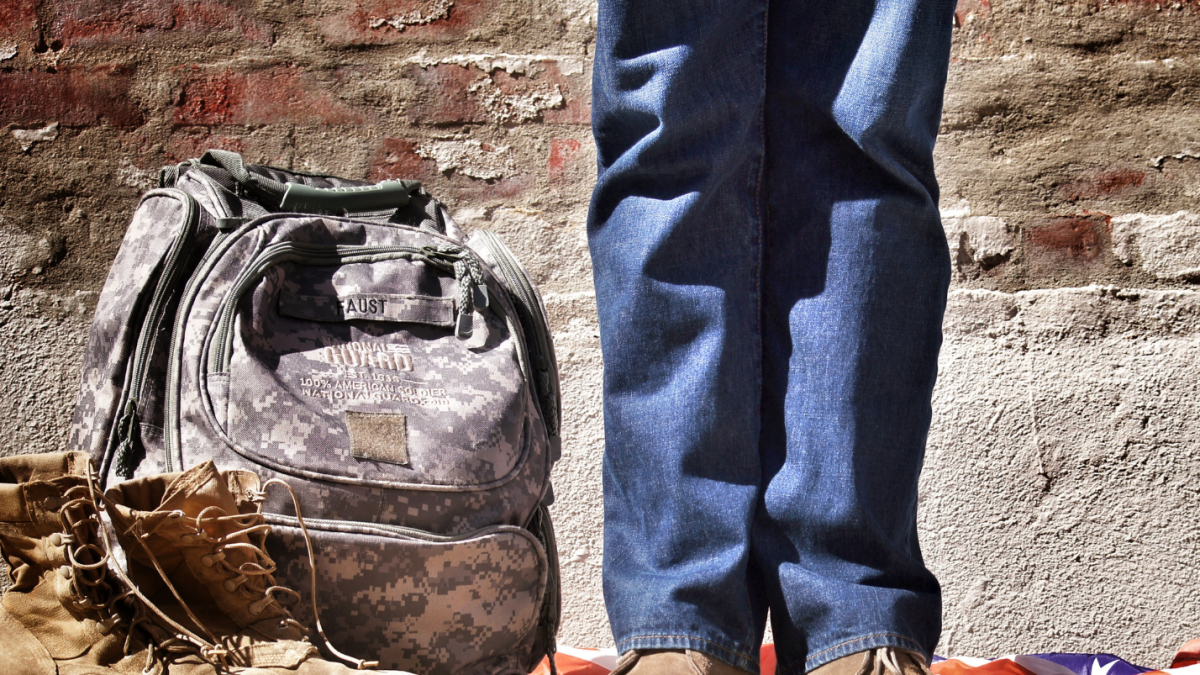 In her new book, "Congress and U.S. Veterans: From the GI Bill to the VA Crisis," Stevens Assistant Professor Lindsey Cormack evaluates how the parties legislate and communicate veterans' policies.

More than 18 million veterans live in the United States today, according to the latest census, and with worldwide presence and ongoing wars, the military enlists 1.2 million active and 800,000 reserve military personnel across the branches. As a nation, we look up to those who serve. It’s a uniting opinion, and 95% of Americans believe it’s the duty of government to support veterans when they return to the homefront.

The role of devising policies that benefit former soldiers now falls to Congress, and so the creation and communication of veterans’ policies, like most things in Washington, is subject to the realities of party politics. Republicans are viewed as the party of veterans, public opinion and voting data says so. But in her new book, Congress and U.S. Veterans: From the GI Bill to the VA Crisis, Stevens Assistant Professor Lindsey Cormack questions how that came to be, as her research shows that congressional Democrats, more often than not, are the ones working to enhance veteran benefits.

“On a continuum of legislative behavior, we have one end populated by the dedicated workhorses who draft legislation, hammer out compromises, and get into the weeds of complicated policy questions,” Cormack writes in her book. “On the other end, there are show ponies that care more about pumping out media sound bites or trying to get the next ‘viral’ video on YouTube.”

To evaluate how Democrats and Republicans fall on this spectrum, Cormack broadly evaluated Congressional legislation and communications on veterans’ policies. Introduced bills can be found in the Library of Congress, and Cormack’s invention, DCinbox, organizes every email communication sent by Congress members to their constituents since 2009. Her analysis unveils who in the 111th-114th Congresses did the legwork, the actual legislation on behalf of veterans, and who focused on lip service, the talking about veterans.

Overall, three subsets of Congress people regularly offered veteran-focused legislation: members of the Veterans’ Affairs committee, members with high numbers of veterans in their constituency, and members of the Democratic party. The research also showed that veterans serving in Congress were no more likely to legislate on these issues than their non-veteran counterparts. 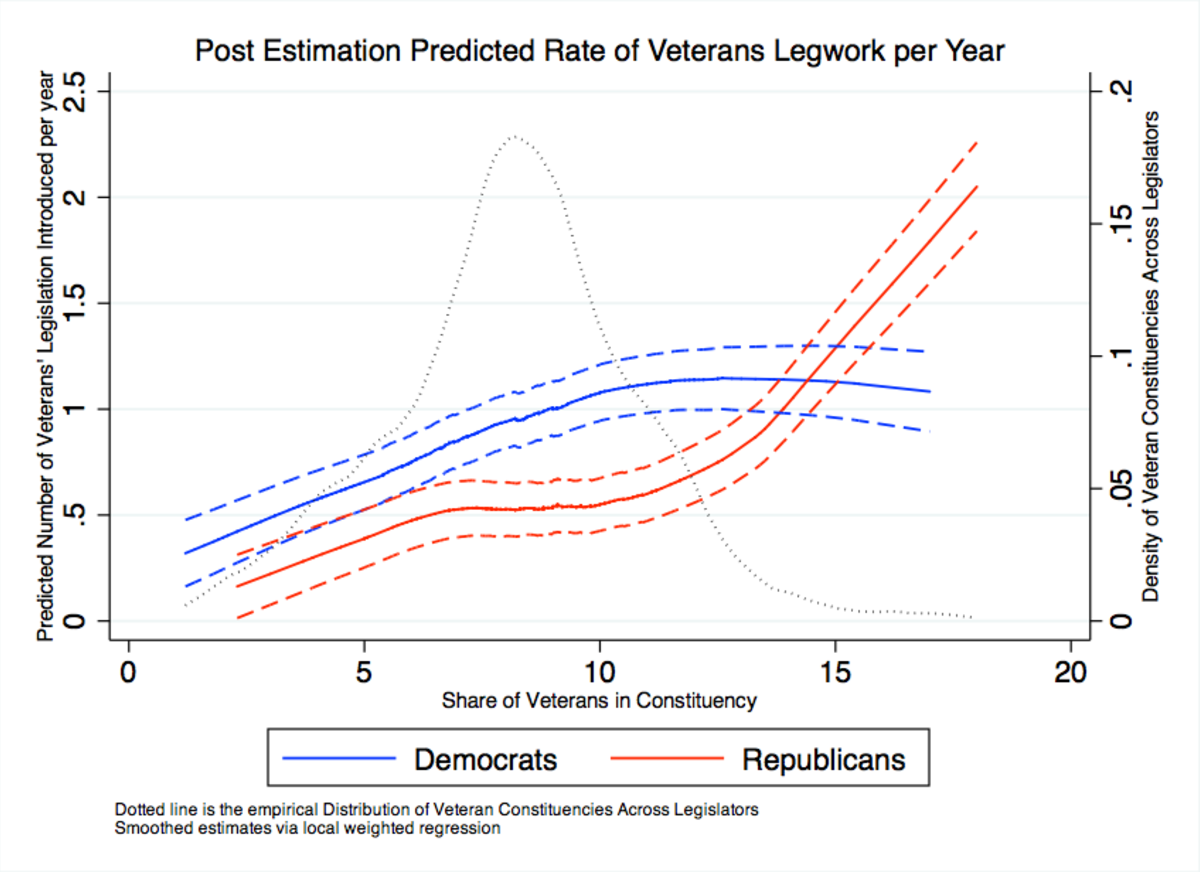 “The contours of modern conservative ideology as manifested within the Republican Party are more at odds with how veterans policies are implemented in the US than liberal, democratic ideologies,” Cormack says. “Republicans tend to talk more about veterans in constituent communications, but they are less apt to author legislation in the area.”

There’s good reason for politicians to talk about veterans, Cormack theorizes. By communicating about a subject, all politicians signal to their constituents that they care, and overall, the topic of “veterans” appeared in 22% of their e-newsletters.

As Cormack’s chart shows below, Republicans excel at this lip service.  Both parties discuss veterans in similar ways, but it's the Republicans who author 66% of email communications to constituents about veterans. 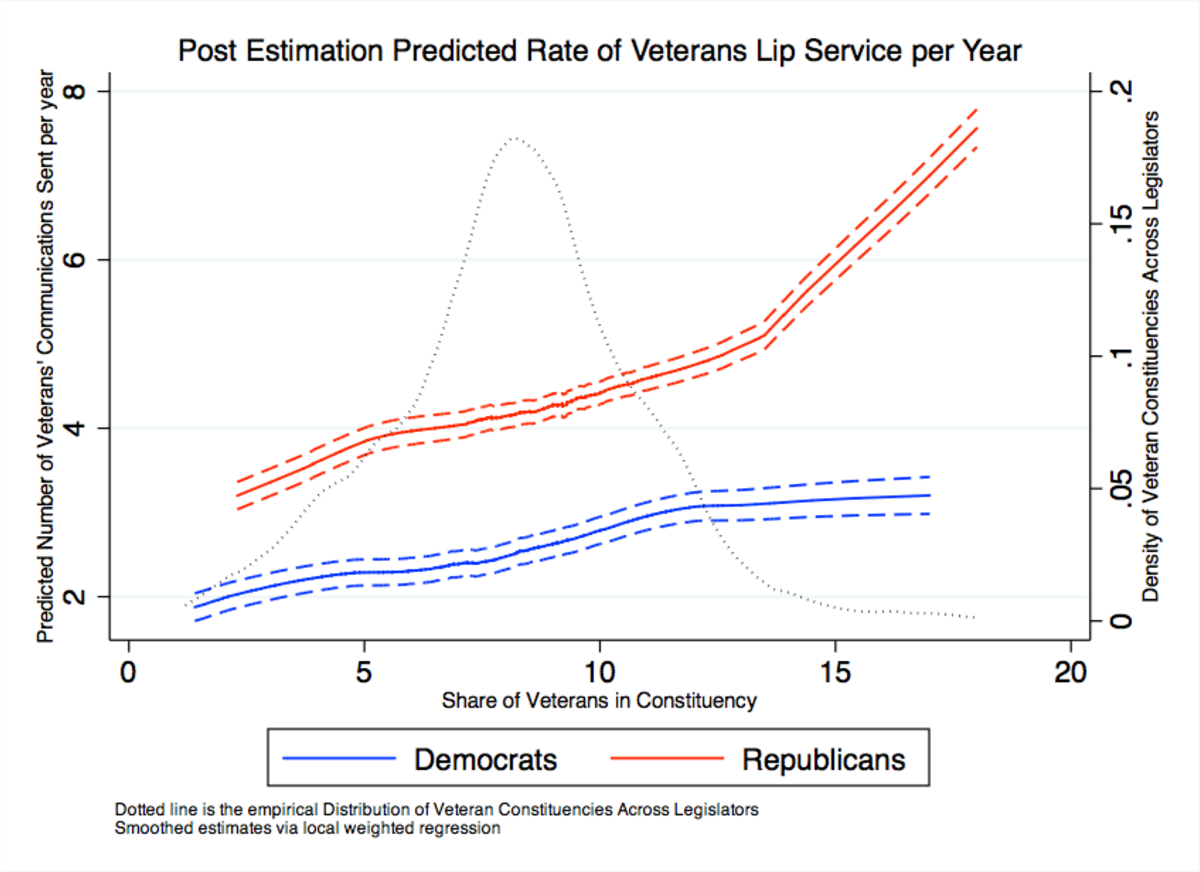 To supplement her data, Cormack presents two case studies, together representing a high and low point of Veteran benefits. The first looks at the Post 9/11 GI Bill, a bipartisan piece of legislation that provides veterans with educational assistance. On the contrary, the next case study considers a 2014 scandal in which at least 40 veterans died while waiting for care at a VA Hospital in Pheonix.

Since publication, Cormack has been making the rounds, giving talks at colleges throughout the country. Most recently, she was joined in discussion with Ramapo's Dr. Jeremy Teigen and Stevens' own Dr. Don Lombardi at the College of Arts and Letters.  On November 11, she'll take part in the sold-out New York Public Library talk "Irregular Order: How Congress Really Works" with Washington insiders and journalists.

Cormack is hesitant to predict the future of veterans' politics, but she does draw some conclusions on how Congress may move forward. "Veterans’ policies in the United States require that both parties give a little, but the programmatic needs of veterans’ policies demand more ideological flexibility from Republicans," Cormack says. "While many in the GOP would balk at funding a robust general social assistance program, there is generally very little visible pushback from Republicans within Congress as long as veterans are the recipients of such aid."

"Moreover, there is a difference between Republican members of Congress expressing support for veterans’ benefits and actively legislating to accomplish it."