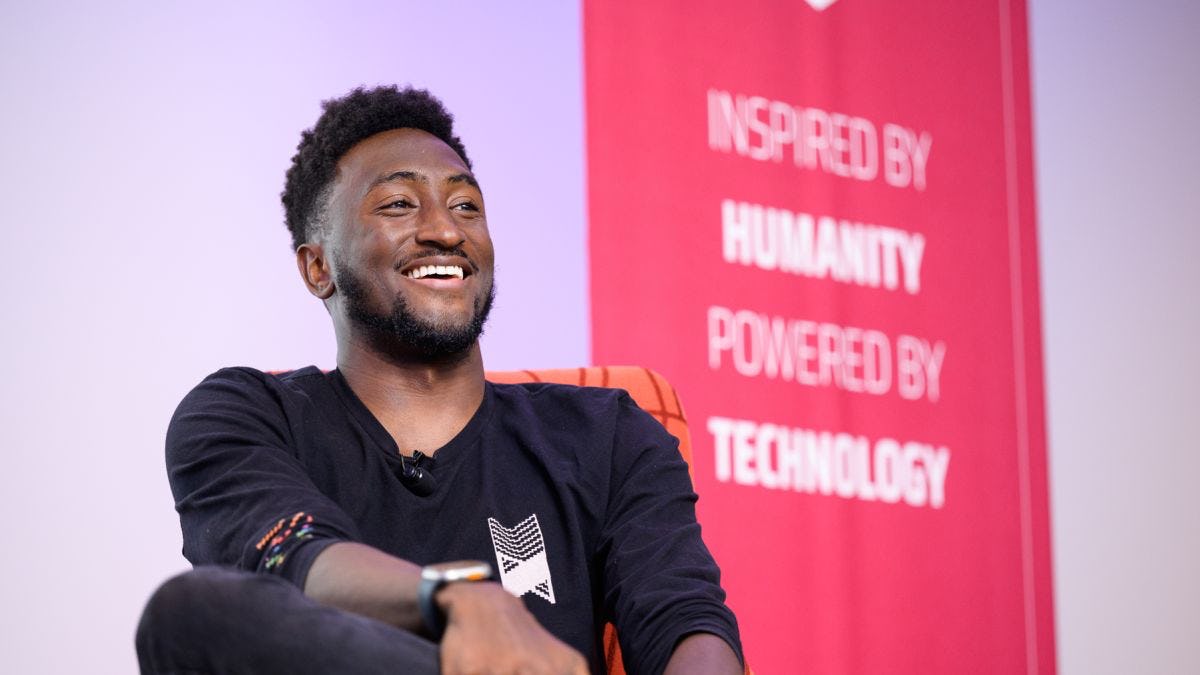 Life as a social media star isn’t quite as simple as it looks. It’s actually a lot of hard work.

But if it’s your passion, with the right tools, you can make it happen.

That was the message from Marques Brownlee ’15 (aka MKBHD), who returned to the Stevens campus September 28 to discuss his life as one of the planet’s leading tech reviewers and influencers.

“Finding something that you’re really passionate about often requires trying a lot of different stuff, but once you find that thing, it kind of becomes a no-brainer,” said Brownlee, who also talked about his memories of the Stevens campus and took questions from a rapt student audience.

“Being able to turn it into a job when I graduated was perfect.”

A steady diet of pizza, Frisbee and videos

He chose to study at Stevens, Brownlee told the audience, because it offered the powerful and rare combination of a technology emphasis and a strong business-school education.

“I had a couple choices,” he said. “I was looking at schools that had good programs. Of the schools I looked at, I picked Stevens.”

Days on Castle Point revolved around dorm life in the Jonas Hall and Humphreys Hall dormitories (and, later, a nearby apartment); eating pizza at Grimaldi’s; and playing lots of ultimate Frisbee on the Palmer Lawn quad. In between, of course, he also studied hard and attended classes as he worked toward his eventual School of Business degree in Information Systems.

Brownlee continued building his business while a Stevens student — in 2013, as a Duck, he asked President Barack Obama a question during a live Google event — and by the time he graduated in 2015, he and his YouTube channel were full-blown sensations.

His resume now includes more than 3 billion video views of his MKBHD YouTube channel’s 1,500-plus technology-review videos — and millions of social-media followers on the major platforms.

When he began making those videos in 2009, he reflected, being a YouTube influencer “was not a real job. It literally didn’t exist. This is my full-time job now…. There’s this fun feeling of pointing a camera at something, that feeling of ‘I made this.’ There’s something about that I really like.”

As a reviewer, MKBHD continuously seeks out or receives all the hottest new tech products before they hit the market, plus thousands more that companies eagerly hope to put in front of him.

It takes roughly three days to create a new video review, he explained, and he also frequently changes the tech he carries around and uses in his daily life to bring a realistic perspective to his reviews.

“I’ll never have a phone for more than about a month,” he related, eliciting immediate murmurs from the crowd. “Is that weird?”

Producing an average of two fresh videos each week, for 15 years running, hasn’t been easy, Brownlee said. Some of the biggest challenges of being a leading tech influencer include the workload; “unplugging” from the rigorous demands of the job; and resisting continual pressure from PR professionals to positively spin companies’ new products.

“The Internet doesn’t really sleep that much,” he pointed out, revealing that two-day professional ultimate Frisbee tournaments are his primary outlet for getting away from the avalanche of review requests and unplugging from messages and work. (His New York-based team took the 2002 WFDF World Ultimate Club open-category championship this past summer, so the method seems to work.)

Brownlee also shared one of his tips for keeping a healthy work-life balance.

“Starting my day, I don’t check my phone until I’m walking out the door,” he said, “which is actually very hard.”

To share the load, Brownlee has recently expanded his studio team, adding specialists to help create thumbnails and edit, something he had personally done for every single one of the first 1,500 or so videos he had posted.

As for resisting the constant pressure to review new products positively, Brownlee keeps it simple.

“The most important part of the job is staying impartial,” he told the crowd.

During the audience-question segment of the program, Brownlee talked more hot tech topics, including the future utility of video as a career-search tool (huge, in his opinion); backup plans, in case anything ever happens to YouTube (it involves a metaphor about Tarzan); and his favorite tech product ever (spoiler: a brand of car you’ve probably heard of).

He even ran into the crowd to take a spur-of-the-moment selfie with a student — and gave a shout-out to the recent upgrades in campus infrastructure.

“I went to Stevens not that long ago, and it looked very different,” Brownlee said. “You guys have an incredible opportunity in front of you, and an incredible campus to do that [on], so congrats to all of you for being here and good luck.”

What’s next for MKBHD? Tech’s top reviewer dropped a bombshell, letting slip a surprise possible hint to the Stevens audience.

“The one thing I’ll say makes a lot of sense,” Brownlee said, choosing his words carefully, “is to graduate from reviewing lots of products… to maybe making some.”

In other words, stay tuned.

To view the entire Duck2Duck talk with Marques Brownlee ’15, visit this link.