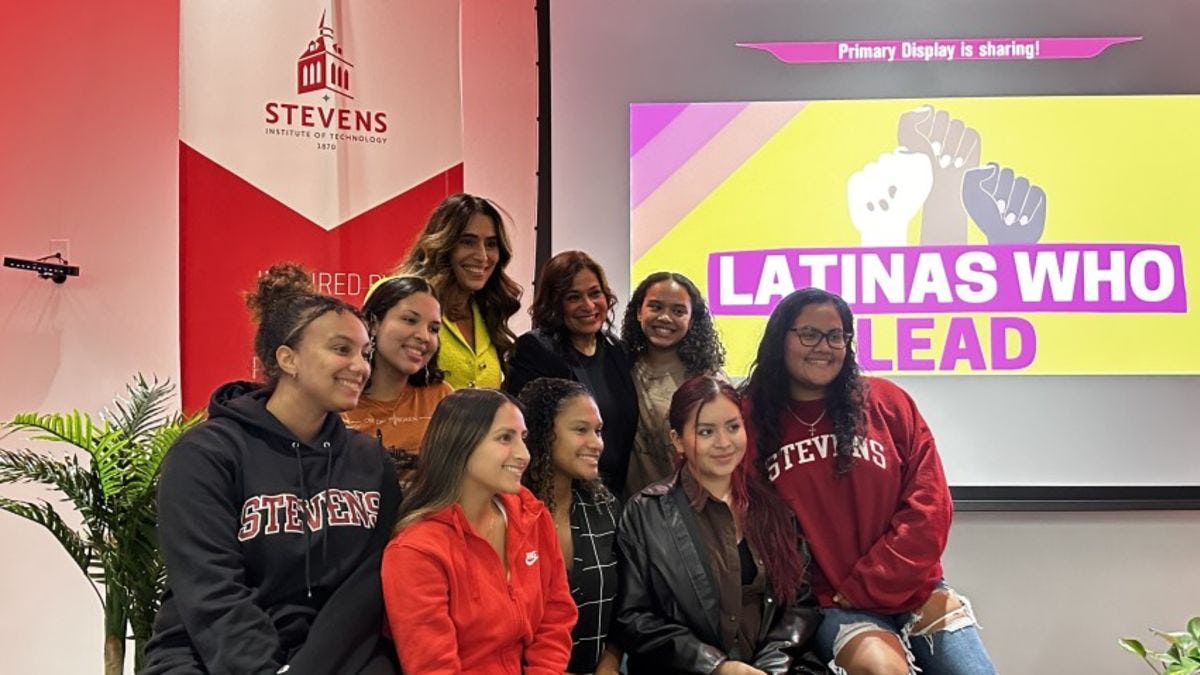 In recognition of Latinx Heritage Month — and in celebration of Latinas in government who are leaders of change and devoted citizens of New Jersey — Assemblywoman Annette Chaparro and state Senate Majority Leader Teresa Ruiz visited Stevens Institute of Technology on Oct. 11 for “Latinas Who Lead,” a special event co-sponsored by the Office of Diversity, Equity and Inclusion, Office of Undergraduate Student Life and the Stevens chapter of the Society of Hispanic Professional Engineers (SHPE). Presented in the University Center Complex’s TechFlex Auditorium, the two politicians fielded questions from third-year chemical biology major Daileen Peña, a resident in the Lore-El Center for Women’s Leadership, treasurer for the Latin American Association and Omega Phi Beta Sorority and head of the SHPEtina committee, dedicated to supporting women in STEM.

Many attendees at the event will be first-time voters and Chaparro, who represents the 33rd Legislative District in the New Jersey General Assembly, which includes Hoboken, reminded them that “it’s important to be involved, educated and to know your rights — everything is connected,” she said, and local elections will have the greatest impact on day-to-day life, while also influencing state and federal elections.

Ruiz added: “When you walk into the voting center, that is where you have the most power.”

Chaparro and Ruiz also discussed their personal journeys into politics. Chaparro did not develop a passion for politics until she began volunteering in her local government, where she saw “what was really going on behind the scenes.” That motivated her to run for office for the chance to make a change. “I realized that everything I had been through in my life is what molded me to be able to do this,” she said.

Ruiz, who in 2022 became the first Latina to lead either the NJ Assembly or Senate, was encouraged by her father to run for office. He taught her the importance of community and saw how fulfilling her volunteer work in the local Democratic party was to her. Ruiz supported candidates who reflected her own beliefs and morals, and her father knew the community would see the same in her.

Ruiz has represented the 29th Legislative District in the New Jersey State Senate since 2008, and the challenges she has faced go beyond winning elections. “So many women have been told to wait their turn, or that it wasn’t their time,” Ruiz said when addressing obstacles she’s faced as a woman in office. “You get exhausted trying to evaluate your worth [when advancing an idea]. I wanted people to see me for what I was capable of, not the stereotypes that would be thrown on me.”

Chaparro agreed, noting that one of the most important things she has learned is that “you have to believe in what you’re saying. Just say the words and you will have people stand with you.”

“When you find something you’re so passionate about, the actual fight for it will comfort you,” Ruiz added.

New Jersey residents can register here by Oct. 18 to vote in this year’s midterm elections. Election day is Tuesday, Nov. 8.