Inside a Brooklyn Emergency Department During the COVID-19 Pandemic 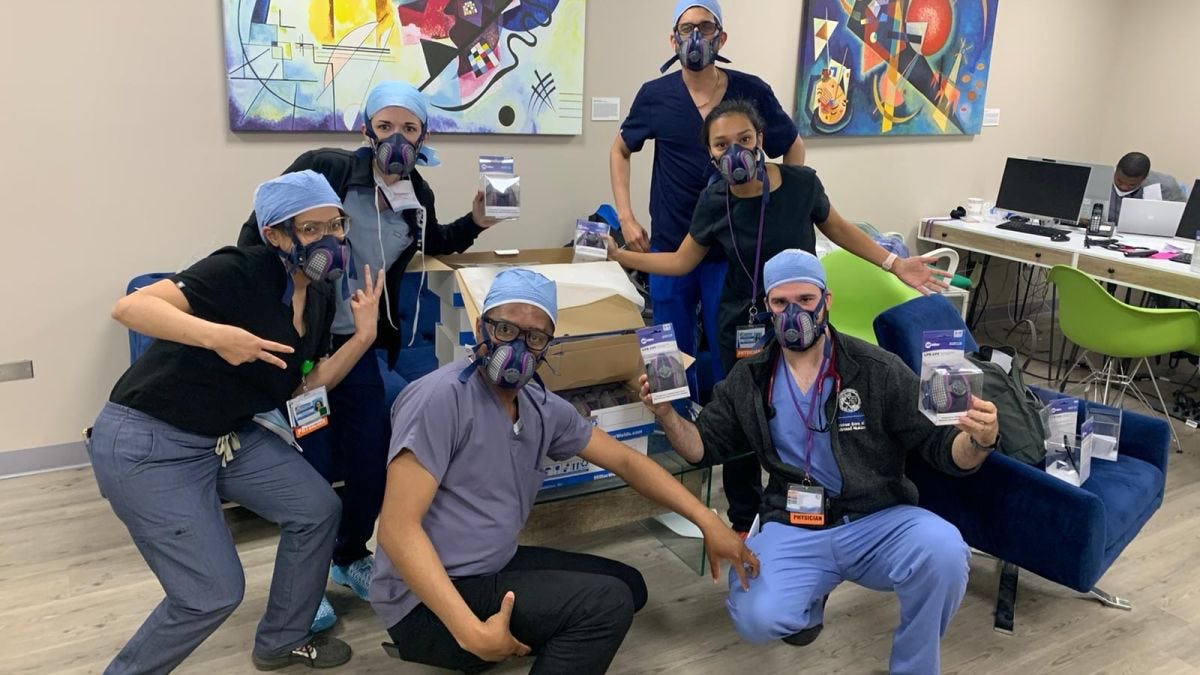 Thoughtful donations of PPE, like face masks, were essential to protecting physicians like Irene Rahman-Garcia ’12 (middle row, right), and medical staff as they battled COVID-19 in a crowded emergency department.

In early July, Irene Rahman-Garcia ’12 logged on to Zoom to speak with The Stevens Indicator at the end of a long shift at Brookdale University Hospital Medical Center in Brooklyn. Still in her scrubs, the third-year internal medicine resident admitted she was tired, but still she spent almost an hour on the call, sharing her experiences combating the COVID-19 pandemic at one of the hardest-hit hospitals in New York City. 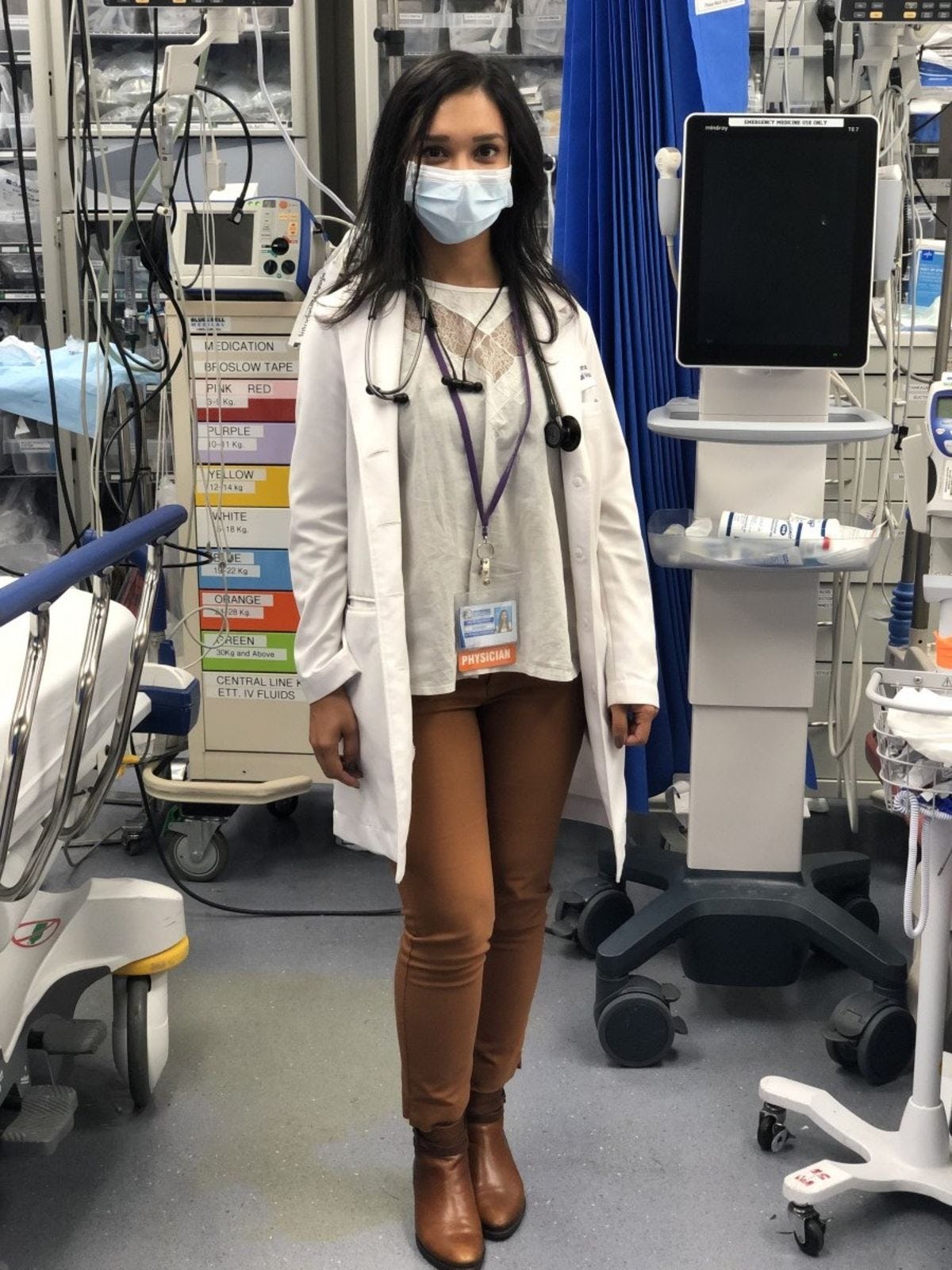 Dr. Irene Rahman-Garcia ’12 estimates that she personally treated at least 500 people with COVID-19 during the height of the pandemic in New York City.

Rahman-Garcia’s demeanor is calm, compassionate and seemingly unflappable as she tells her story — traits that undoubtedly serve her well working in medicine. After all, so much of her work hinges on good communication with patients. Brookdale is a community hospital in an underserved area of eastern Brooklyn where many rely on the facility as a source of both primary and emergency care. Each day, the hospital treats conditions that run the gamut of severity, from the flu to traumatic injuries like gunshot wounds. Patients face many challenges due to their socio-economic status, Rahman-Garcia says, including a higher rate of chronic conditions, such as obesity and cardiac issues, and even a fear of the hospital itself. “They tend to be more sick because they usually don’t have the money or insurance to cover themselves for treatment,” she explains.

Upon admission, assessing a patient’s true condition can take a bit of detective work. “It’s absolutely important to learn medicine very well in order to treat your patients. But there’s also an art of medicine, which is knowing how to communicate,” says Rahman-Garcia. “You don’t know what’s going on with them unless you actually speak to them. A lot of times, things get lost in translation, whether it’s language differences, or an inability to describe what’s going on with them; especially when they’re very much in pain, or just in a situation where they really don’t want to be in the hospital.” She finds that building a relationship with each person — and often their families as well — is essential to delivering the best care. “Once you actually build that rapport, that’s when you can have them open up to you.”

A passion for ‘wholesome medicine’

The idea of taking care of the whole patient — or “wholesome medicine,” as Rahman-Garcia calls it — is what drew her to her current profession. Initially interested in environmental engineering, she pivoted to medicine midway through her undergraduate career at Stevens, inspired in part by volunteering at Hoboken University Medical Center. Following graduation, a research and pathology position at the University of Pennsylvania confirmed that her true passion was at the bedside, rather than in the lab.

She attended Ross University on the Caribbean island of Dominica for medical school before heading back to the New York area to begin her residency in internal medicine at Brookdale in 2018.

2020 marks Rahman-Garcia’s final year of residency — the grueling last step toward completion of her medical education. And while this period is rarely easy for aspiring physicians, not many who have come before have been tested by a global pandemic. She remembers the confusion of the early days when symptoms of COVID-19 weren’t well known, tests weren’t widely available and standards for treatment hadn’t yet been defined. “During that time, it was very hard to tell what it was,” says Rahman-Garcia. “Patients would contact their doctors saying they had body aches and chills. They’re treated as if they had the flu, and then they would come back saying ‘Oh, I don’t feel much better. In fact, I feel worse.’” Some individuals with mild symptoms like a cough and shortness of breath would become critical overnight. “The quick turn that they took was the scariest part for us,” she says.

As case numbers increased, hospital staff pored over emerging clinical studies to better understand the virus and develop safety protocols. This was not an easy task, given shortages of PPE and an inadequate number of isolation rooms in an overflowing emergency department (ED). Eventually, the staff had to stop letting patients into the hospital unless they had COVID-19 or another life-threatening condition. This policy also meant that patients could not be accompanied or visited by loved ones. Such restrictions were challenging when the prognosis was good, but they were especially devastating when the patient succumbed to the virus.

Rahman-Garcia estimates that she’s personally treated at least 500 people with COVID-19, and her hospital has admitted more than 1,000. “We’ve had nights where we’ve had 15, 16 people pass away in one night,” she says sadly. “Unfortunately, that’s the reality of things — we have seen so many people pass away.”

One particular evening sticks with her. “This was probably the fifth person I had to call that night. I talked to the [patient’s] daughter, explaining to her that her father passed away, who she thought was completely OK … I told her ‘I’m so sorry, I tried to do everything I possibly can.’ The response she gave me brought me to tears,” Rahman-Garcia remembers. “She told me, ‘I don’t have the heart to tell my mother. Is it possible that you can call her because I can’t call her to tell her he passed away?’ So when I hung up the phone, I cried. The nurses that night, they were patting me, saying ‘I’m so sorry you have to do this.’ I’m like, ‘I have to, who else is going to tell them?’”

The power of connection

Patients weren’t the only ones contracting the virus. Rahman-Garcia and her husband, who was also in residency at Brookdale at the time, both tested positive for COVID-19 during the height of the pandemic in New York City. As a result, they gained a first-hand understanding of the virus. Fever, chills, night sweats and overwhelming fatigue kept them home for a week, but a duty to their patients and colleagues compelled them to return to work as soon as possible.

Rahman-Garcia sees the personal connections forged during the pandemic as a bright spot during this dark time. “There was a point for all of our residents, all of our hospital doctors, where we’ve really broken down — we can’t lie and we’re not as strong as we seem,” she admits. “We kind of held each other together because that’s the only way we could.” Unexpected donations of PPE, medical equipment and personal care products from nonprofits and local businesses also made a big difference in both the daily work and morale of hospital staff. “I feel like the last time I’ve seen anything like this was back in 2001 with 9/11, when humanity was so unified,” she reflects.

As case numbers have decreased in New York, life at Brookdale has become a little calmer, says Rahman-Garcia. Many patients have recovered and been discharged. Community compliance with public health measures such as hand washing and wearing masks seems to have increased, and individuals are checking themselves into the hospital at the appropriate time when they feel sick, she observes. And when patients are admitted, Brookdale is now more prepared with ventilators, medication and PPE.

Though the future of the virus, and therefore, our everyday lives, is uncertain, Rahman-Garcia urges us to use this time of pause wisely. “I hope that everyone takes the time to reflect on what is important to them. It’s really important to not only take care of yourself, but to take care of your family and really appreciate your loved ones … this is the time for us to come together, not to separate apart.”