“I’m making a difference in a critical industry.” 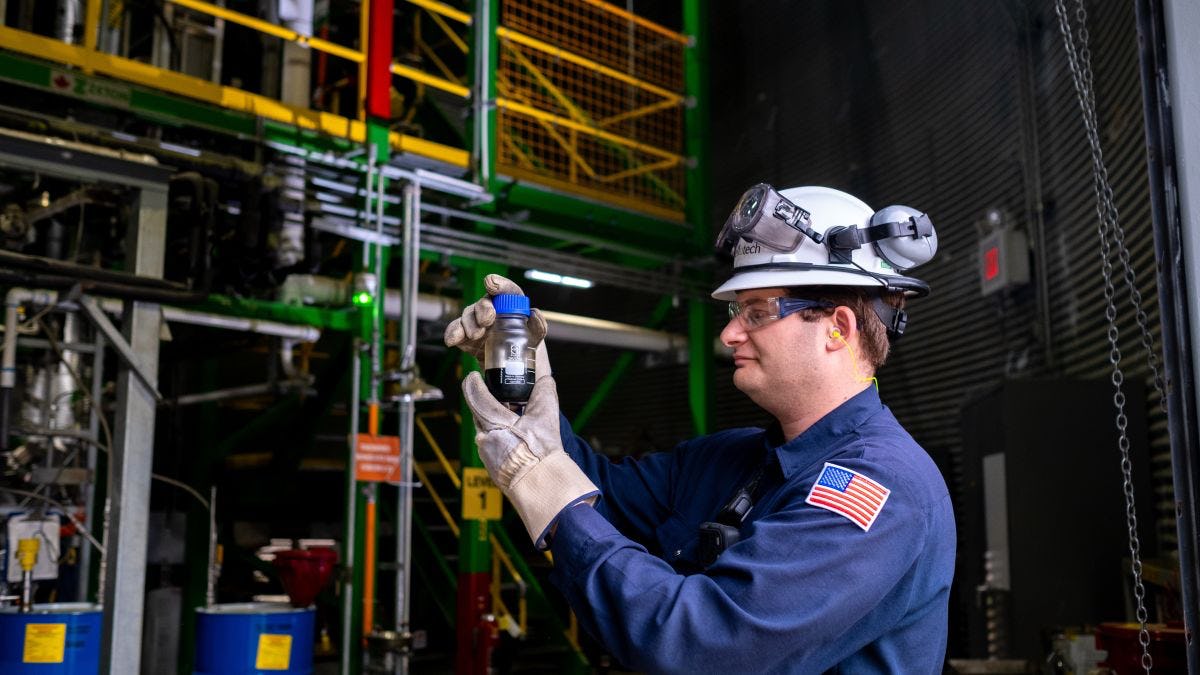 David Stein ’18 M.Eng. ’18 pivoted to a new career in the renewable energy sector during the COVID-19 pandemic.

As a Stevens student studying chemical engineering, David Stein ’18 M.Eng. ’18 had a long-term goal of working in the renewable energy sector at some point in his career.

“I always thought of energy production as one of the most important industries worldwide, and it’s apparent that we need to move to renewable, sustainable sources that are better for manufacturers and the environment,” Stein says.

He didn’t think an opportunity to join the sector would come his way less than three years after he graduated from Stevens with his bachelor’s and master’s degrees. But like millions of other Americans, the COVID-19 pandemic prompted an unexpected — yet welcome — career pivot for Stein. 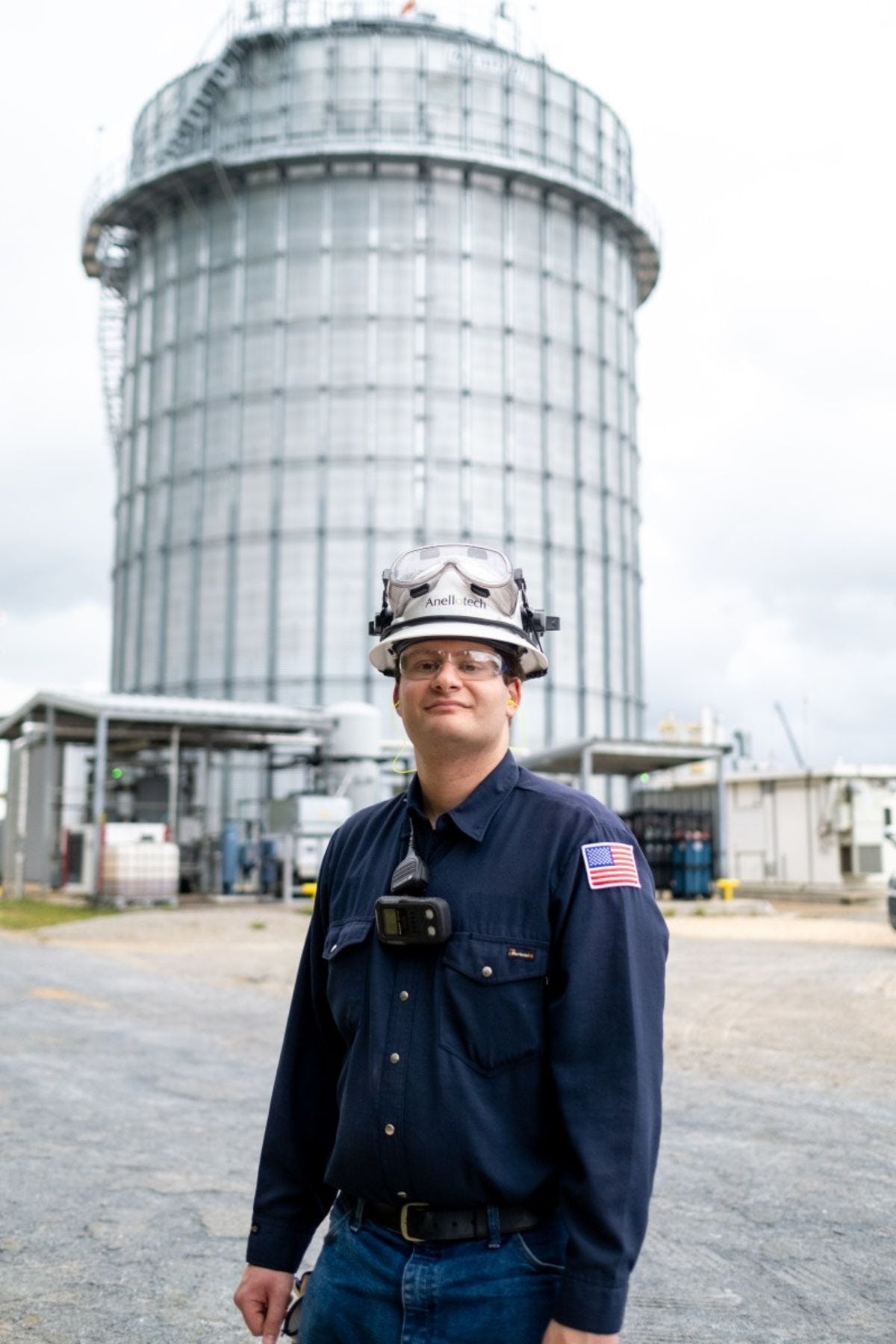 David Stein ’18 M.Eng. ’18 is seen at a pilot plant for Anellotech, which focuses on creating renewable chemicals and fuels from biomass and waste plastics.

After leaving ExxonMobil in late 2020, Stein joined Anellotech, a sustainable technology startup focused on creating renewable chemicals and fuels from biomass and waste plastics. Stein is an engineer at Anellotech’s pilot plant in Silsbee, Texas. The plant previously converted non-food biomass into hydrocarbons. Over the past year, the plant has shifted its focus to turning mixed waste plastics into commodity chemicals such as olefins and aromatics — the primary chemicals used to make recyclable plastic packaging and other products.

“By trying to find new uses for waste plastic, we’re not only working toward a renewable energy source but also helping to reduce the massive load of plastic waste we have in our world, especially in our waterways,” Stein says. The ultimate goal of the pilot plant — which will operate for the next couple of years — is to create the building blocks for renewable fuels, but the primary product of the pilot plant these days is data, Stein says. In addition to keeping the unit running, his team works to determine the right parameters for processing the waste plastic through the system. Then, the team hands off what they’ve learned to another Anellotech team charged with applying that knowledge to the future construction of a full-size manufacturing plant for the company’s investors.

The basic skills required of Stein’s role at Anellotech don’t differ greatly from his previous role, he says. The application of those skills, however, is another story.

“My [previous] role was more about keeping the process moving. A lot of what I had to do was already set in stone,” he says. “Here, things are more flexible and experimental. It’s a lot of research and experimentation.”

Also, because the pilot plant team is much smaller, Stein wears a lot of hats, from process control engineer to pipe-fitter. “I know the unit as well as anyone else down here,” he explains. “My input is recognized and more meaningful than it was before, and I feel like I’m really contributing.”

Stein credits the strength and breadth of his Stevens experience for the success he’s had so early in his career as well as his smooth transition between jobs in the middle of a global pandemic. In addition to his foundational knowledge in chemical engineering, Stein says he leans often on his work with WCPR – Castle Point Radio, of all things.

“When I was at Stevens and part of the radio station, it was a lot of balancing, coordinating, scheduling mobile units, getting people to go and run our events,” he recalls. “To be able to coordinate and balance with different groups of people is important. If something goes wrong in one area of the plant, I need to coordinate and get people from different areas to come and help.”

Participating in Stevens’ cooperative education (co-op) program also prepared him to work in a variety of different environments, from research and development to process management. That’s why, when an opportunity arose to connect Anellotech with current Stevens students, Stein jumped at the chance to build a bridge.

Although Anellotech’s lab facility is in Pearl River, New York — only about 30 miles from Hoboken — the nearly 15-year-old company hadn’t made a formal connection to Stevens. But when Stein learned the facility’s director of reaction engineering sought summer interns, he offered to share the job description with his Stevens adviser and the chemical engineering honor society on campus. Several students applied; two were hired and one returned over the winter break for a few weeks. From his conversations with both the Pearl River staff and the Stevens students, Stein says, it seems like both sides were pleased with the partnership.

“It’s definitely satisfying to be able to give back,” Stein says. “I’m fortunate and thankful that I was part of the co-op program … To be able to create this new opportunity for students and establish a relationship with our company moving forward, that’s pretty gratifying.” Also gratifying: Seeing a wide-open career path just a year and a half after leaving one of the largest companies in the world.

“It was frightening, but overall, I think I’m a lot happier,” Stein says of the change. “In big companies, you follow the road they prescribe for you. Here, it’ll be easier for me to branch out and choose what I want to do going forward. Starting a pilot plant is a big thing, it’s not very common, so it’s been a unique experience.

“I definitely feel like I’ve landed on my feet.”