“I made my dream of owning a small business a reality.” 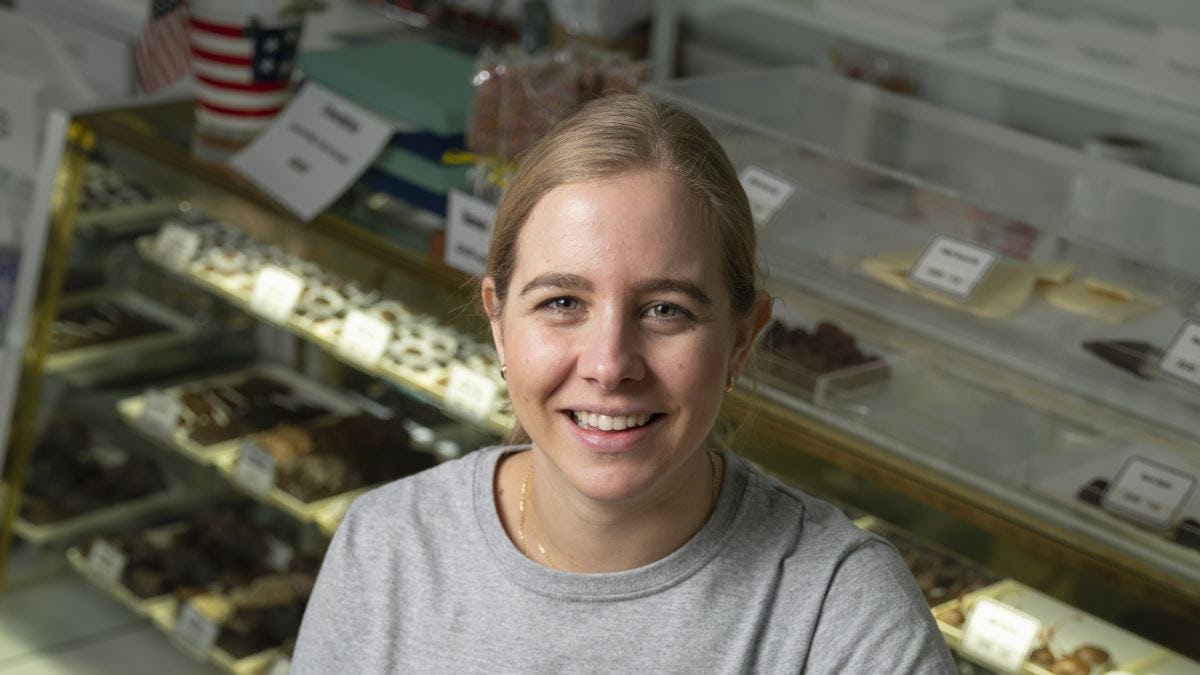 Joyce Harris ’18 M.S. ’18 dreamed of owning Third Avenue Chocolate Shoppe when she retired — a business in her hometown where she worked part-time while in high school and college. Photos: John Emerson

Joyce Harris ’18 M.S. ’18 remembers trick-or-treating between local businesses in her hometown of Spring Lake, New Jersey, as a 10-year-old. That Halloween, she joined a crowd of kids inside Third Avenue Chocolate Shoppe who eagerly accepted candy necklaces from the store’s then-owner, Matt Magyar. Harris received the last necklace, but selflessly gave it to a boy who hadn’t gotten one. “At that moment, Matt looked at me and said, ‘When you’re old enough for a job, come find me at the store,’” she recalls.

When she turned 14, Harris returned to Third Avenue Chocolate Shoppe to take Magyar up on his offer. She worked at the store — which has been a Spring Lake staple for 32 years — throughout high school, building relationships with both employees and customers, and even learning how to make some of store’s original recipe candies. Once she started her studies at Stevens, Harris continued to work at the store in the summer and picked up shifts during school breaks. It wasn’t until she graduated in 2018 with a bachelor’s degree in business and technology and a master’s degree in information systems that she decided to hang up her apron and enter the corporate world.

Harris joined Scholastic as a business analyst in their technology division. In her role, she served as a conduit between software engineers and customers, helping to manage the creation of a content management system for the company. After two years with Scholastic in New York City, the lease on her Hoboken apartment was nearing its end. “I knew that I wanted to move a little bit closer to where I grew up,” says Harris. She quickly found a new opportunity with Holmdel, New Jersey-based WorkWave, a company specializing in field service software for industries like pest control, landscaping, cleaning services and more.

While some workers welcomed the shift to remote work prompted by the COVID-19 pandemic, Harris found it difficult — especially as a new employee tasked with facilitating communication between teams she’d never met face-to-face. “It took me about six months to adapt to the role and figure out everyone’s personalities,” she says. “When you’re in the office you take for granted how much easier it is to pick up on team dynamics.”

Eventually, Harris developed good virtual relationships with her coworkers, but something still didn’t feel right. “Even though I loved the company I worked for, I started to realize that I didn’t love the work I was doing,” she recalls. While sharing a home office with her husband, William Harris ’19, she couldn’t help comparing their work experiences. “He’s an engineer and loves what he does,” says Harris. “It was hard for me to see him have that passion and not feel it myself.”

Just as Harris was beginning to consider a pivot to another position or industry in February 2021, she got a call from her former boss at Third Avenue Chocolate Shoppe. After 32 years of candy making, Magyar was ready to retire. “I always joked with him that if he ever wanted to sell the business to let me know because I loved it so much,” laughs Harris. “I called it my retirement dream.” After a few conversations with Magyar, her dream was on the way to reality much sooner than she ever anticipated.

“I was nervous about leaving behind a stable salary,” she admits. “I had just gotten married and bought a house, I was contributing a lot to our mortgage and bills … it was definitely a little leap of faith.” Harris was encouraged by the Shoppe’s proven track record of success plus the support of her husband and insight from her father, who had owned a business before he retired. She also knew she could draw on the skills she learned in her Stevens business classes, including accounting, marketing and management.

Following a few months of legal and administrative work, Harris became the official owner of Third Avenue Chocolate Shoppe on May 1, 2021. One of her first tasks as the new proprietor was to learn how to make the incredible array of specialty chocolates sold at the store. “We have over 100 chocolate products and about 90 to 95 percent of them are made on the premises,” she says. Harris kept Magyar on as a consultant for a few months so that he could give her a crash course in candy making. “The hardest part isn’t working with the chocolate, it’s all of the stuff you have to cook, like caramel, toffee and fillings,” she explains. “The fillings are a little more intensive because it’s really recipe and temperature-driven.” 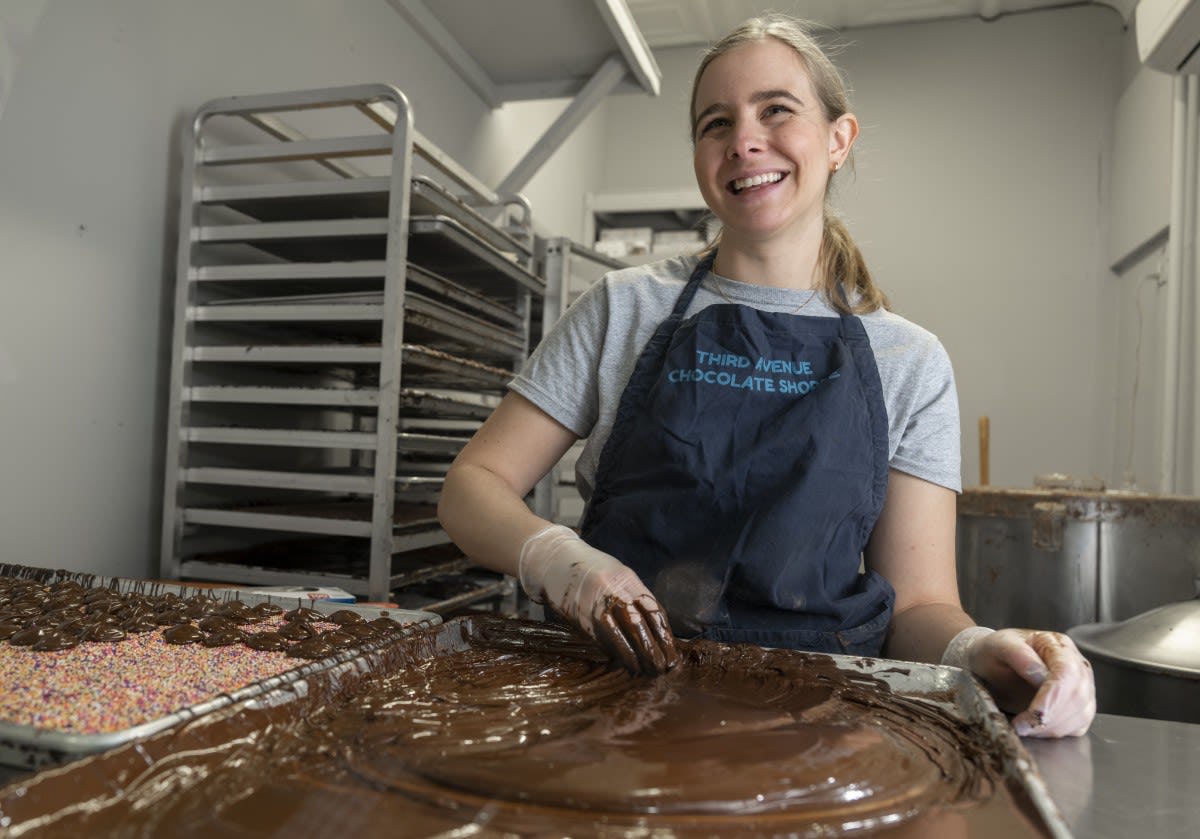 Joyce Harris ’18 M.S. ’18 at work at Third Avenue Chocolate Shoppe. She also teaches a course on entrepreneurship with the School of Business at Stevens.John Emerson

When she’s not making candy, Harris is serving customers. Third Avenue Chocolate Shoppe has a lot of regulars — from kids who stop in for a treat after school, to corporate customers who order hundreds of boxes of chocolate as client gifts. The Christmas and Easter holidays are some of the busiest of the year, requiring months of advance preparation to ensure enough seasonal specialties are on hand. Since Spring Lake is a shore town, the summer also means an uptick in walk-in sales from vacationers.

While Harris is typically at the store seven days a week, she finds balance by delegating tasks according to the talents of her rotating staff of 17 employees — an important management skill she learned at Stevens. “When I’m not the best at something, it’s better to let someone else take the reins,” says Harris. “I like to be in control of most things at my business, but there are some things I’m not great at — for example, social media. In those aspects, I find someone who I trust and let them run with it. It can be scary at times, but it’s important to ensure I have a life and time outside the business.”

As a small business owner and Stevens alumna, Harris is uniquely qualified for her second job — teaching a course on entrepreneurship as an adjunct professor with the School of Business at Stevens. When planning her lessons, she strives to present the material in a relatable way for her students. This means bringing in young alumni entrepreneurs as guest speakers and sharing her own journey with Third Avenue Chocolate Shoppe. “I am really transparent with them about what it’s like starting off [as a new business owner],” she says. “They can ask questions like, ‘How do I start an LLC?’ and I can answer them since I’m not far removed from that experience.”

Now with a year of ownership under her belt, Harris is glad that she took a chance on the Shoppe. “I wake up every day excited to go to the store … I have a big sense of pride,” she says. “It is not often that dreams are sitting in front of you so attainable.”