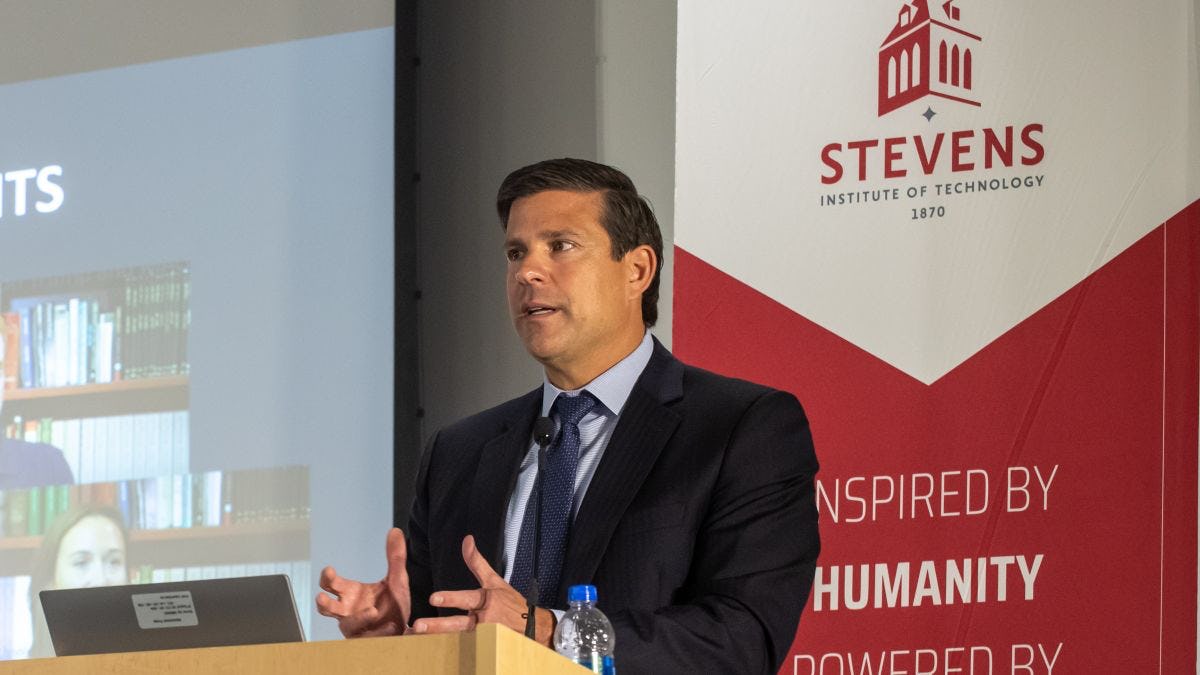 While it may not seem obvious that someone who studied mechanical engineering as an undergraduate at Stevens Institute of Technology would spend a substantial portion of his career working in media, to Michael Fabiano ’93, head of the Americas Business at The Associated Press (AP), it makes perfect sense.

“The Associated Press has been, from the start, machinists, engineers and journalists collaborating together to solve problems, much in the Stevens fashion of problem solving, to deliver improvements to the world of journalism. The work is approached creatively but we draw information and ideas from all sorts of sources, from all emerging technologies.”

Held in the Tech Flex Auditorium in the University Center Complex, Fabiano presented Breaking Barriers: How Innovation is Changing the News Industry, the 15th installment of the President’s Distinguished Lecture Series, which invites thought leaders in science and technology to create debate and spur discussion on the role of technology and its implications in 21st-century society. Stevens President Nariman Farvardin awarded Fabiano the seventh President’s Medal, presented to individuals who have had a significant impact on society, and announced a scholarship in Fabiano’s name, to be awarded to an incoming first-year student next fall.

“Since we began this lecture series about a decade ago, we have not had a discussion focused on exploring the role innovation plays in the news industry, but we are all great consumers of news on a daily basis. It’s a great honor to have Michael Fabiano back on campus to share his insights on how technology is changing the news industry,” Farvardin said.

Using the historic background of the AP, a 176-year-old global news organization, as a framework, Fabiano’s hour-long discussion centered on the advancements and ongoing challenges in the news industry and how news organizations can leverage technology to meet its demands.

“We’ve got this wonderful digital landscape that’s opened up free speech around the world, but I think it’s the greatest civic challenge of our time,” he said. “The digital world has disrupted the media ecosystem and it’s created a huge responsibility for us as a society — we can all participate. It’s a global problem we must solve: having a healthy information ecosystem with less disinformation, hate speech, polarization. This is an exceptional challenge, not just for the Associated Press but for the planet.”

The sheer volume of information that is uploaded and shared over the internet every single day is a major issue facing the AP and all news organizations.

“Today, you can create anything you want in your room anywhere around the planet, and this is creating a massive issue for us: What’s real, what’s fake? With 3.2 billion images shared a day — there’s probably nearly a billion hours of video shared daily — how on Earth do we know what’s real and what’s not?” he asked.

The solution, Fabiano says, is being comfortable with transformation and change in this “collision of technology, business models and creativity,” and embracing an entrepreneurial mindset to prepare for what’s next.

For the AP, that means using and developing new technologies to not only address the challenges news organizations face today — verifying data and sources, organizing and distributing content to multiple newsrooms with different interests and timelines, among others — but also future challenges, many of which remain unknown.

“I don’t know what we’re going to call [the digital landscape] in a few years but this is my world right now. It’s artificial intelligence. It’s natural language processing, machine learning, automation, vision, robotics, business intelligence, NFTs, user-generated content, what’s going on with the blockchain, how do we track our assets, the metaverse, web 3.0 ... This is where we are,” he said. “It’s exciting, it’s scary, so we’re casting a wide net into the future of technology and innovation.”

Along with these new technologies comes new and in-demand skillsets in the media industry — with job titles such as data journalist, quantitative journalist and computational journalist. Fabiano used the example of “somebody who has a computer science degree from Stevens, maybe worked at The Stute and has an interest in journalism and likes to see the marriage of those two things together” as an ideal candidate. These positions “can’t get staffed fast enough,” he said, and those who are performing this work have already added a ton of value.

Regardless of how the digital landscape develops or what technologies are invented and implemented, Fabiano says that the AP’s longstanding mission to “inform the world” will remain at the heart of progress.

Fabiano’s experience uniquely qualifies him as an expert in this space. Prior to joining the AP, he served as vice president of business development at NBC News. He also served as general manager for The Weather Channel and led the deployment of branded digital initiatives across NBC News, The Today Show and MSNBC, among others, and created strategic partnerships with Apple, Amazon, Google and Sony. Fabiano previously held senior leadership roles at NBC Universal Corporate Strategy, Cendant Financial and Accenture. He holds an MBA from Columbia University and a master of liberal arts in journalism from Harvard University Extension School, as well as two bachelor’s degrees from Stevens — a B.E. in mechanical engineering and a B.A. in English and American literature.