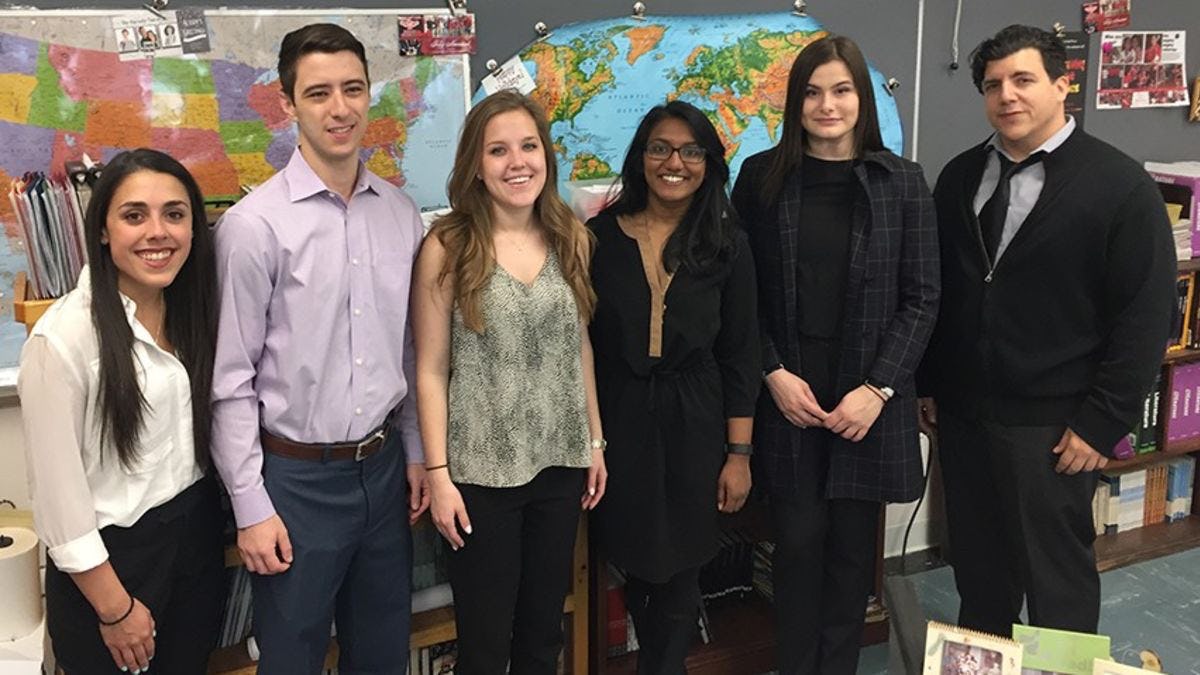 Students at Hoboken High School get a free period in the late morning for personal growth and development, and by listening to the announcements as 11 a.m. approaches, you get a sense of how many options there are beyond just a study period — from college preparation sessions to class photography.

But in Damian DeBenedetto’s third-floor classroom on a Thursday morning in late March, nearly 30 students attended a Stevens Making Cents workshop on financial literacy — a program created by a group of business students at Stevens Institute of Technology that will soon roll out nationwide.

The School of Business seniors conducted nearly 100 interviews with high school students, parents and teachers to identify weak points in financial literacy for college-bound students, then created a series of engaging workshops tackling topics like bank account functionality, credit and debit, and financial goal-setting. Rather than delivering lectures, the team devised quizzes, games and other materials to engage students and foster interaction.

During the team’s last onsite workshop, the Stevens seniors taught the students about budgeting and SMART goal-setting through role-playing exercises. Students had their budgetary allotment — in Cheerios — affected by student loan debt or rising health insurance costs.

“One of the most challenging aspects was picking topics that would be engaging enough,” said Business & Technology major Sarah Gleason, who will be working at Credit Suisse after graduation. “Stevens offers a well-rounded curriculum that gives students opportunities to engage in conversations in the classroom — and that's what we tried to create here, an open platform for them to talk and voice their concerns about financial issues.” 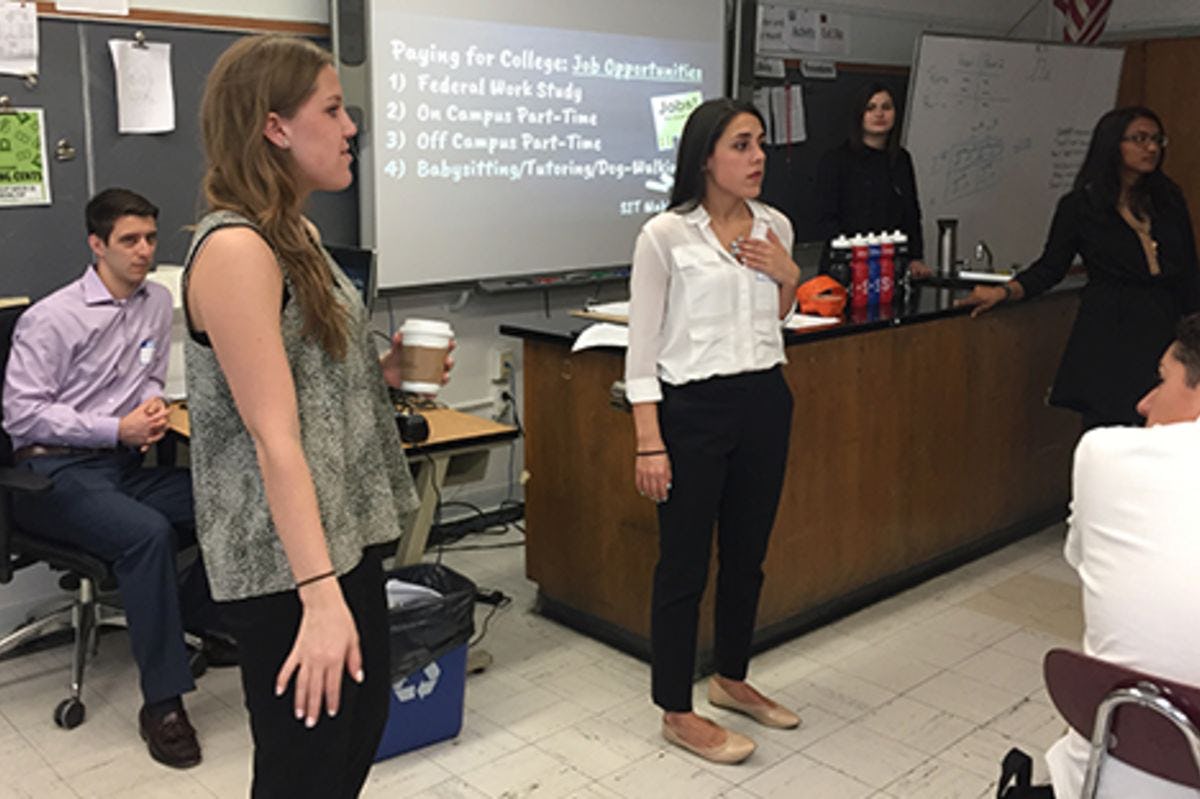 The group’s extensive research helped with topic selection, said Reeba Anna James, another Business & Technology major who will be a business analyst at Scholastic after graduation.

“Interviewing the Hoboken students helped us see which topics they needed to learn about most,” James said. “So instead of just bringing solutions, we focused on what the problem areas were, and built solutions from there.”

It also prepared them to conduct the classes, said Allie Masciana, another Business & Technology major who will consult in the technology advisory program at EY after graduation.

“We tried to establish that mentor-protégé relationship — we’re not that much older than they are, so I think it was easier for them to relate to us,” she said. “And by making the workshops interactive, we were able to incorporate a lot of things we have in common, to more easily develop those relationships within the classroom.”

DeBenedetto said working with Stevens students was a valuable experience.

“Getting to hear from people who are in college already makes it more relevant to the students,” DeBenedetto said. “And the Stevens students are very committed — their success is a testament to their work ethic.”

An ideal location for finance

In addition to their work ethic, the students on the team have strong financial knowledge — a testament to Stevens’ closeness to the financial industry, which lends impact to finance curricula and supports the school’s incredible job placement rate. Stephen Rienzi, an Information Systems major, said a guest speaker from a Manhattan bank visited his corporate finance class to talk about how the Dodd-Frank legislation affected their operations.

“It made it a lot easier to understand the impact of Dodd-Frank when you could hear about it from someone who experienced it firsthand,” Rienzi, who also is off to a career at EY, said. “Our location is a big part of that.”

Ahead of the May 3 Innovation Expo, the team is reviewing its materials and approach, to assess what worked and what can be improved. After showcasing their work, they plan to prepare it for distribution to Beta Gamma Sigma chapters throughout the country. The business honors society encourages its members to use their intellectual gifts to create impact in their communities. 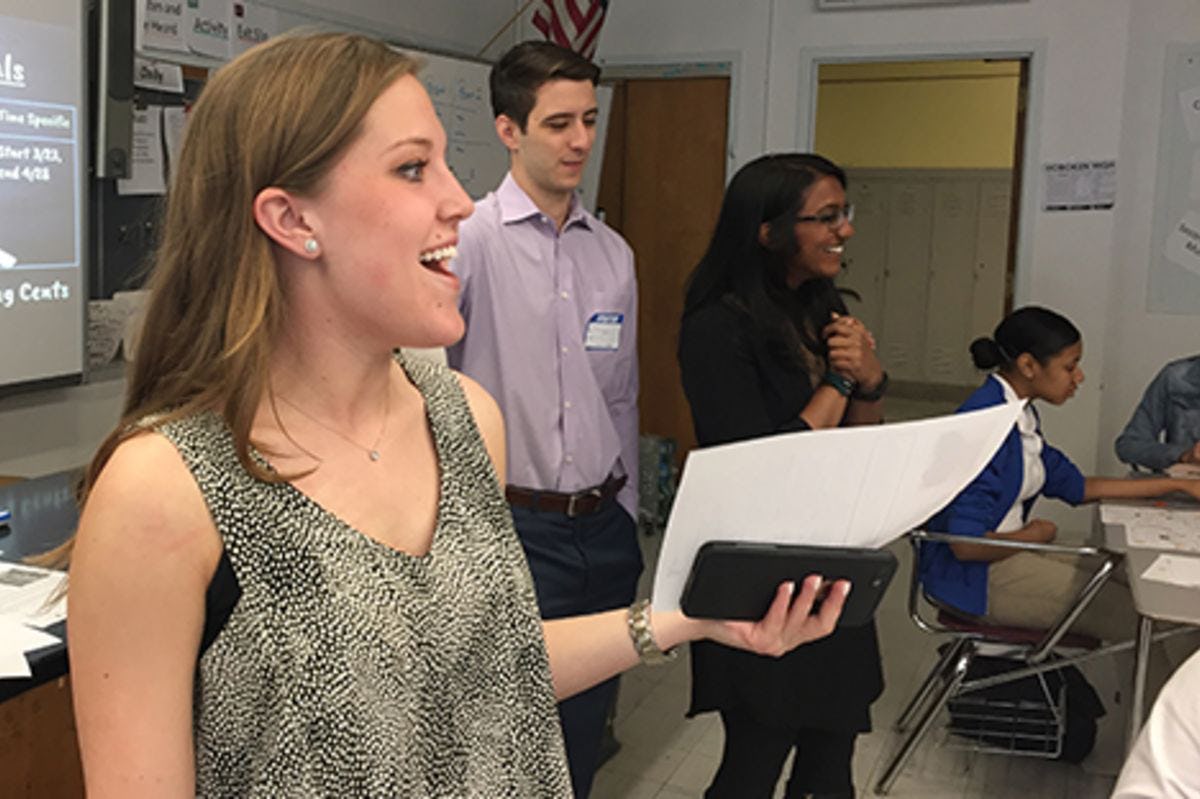 Sarah Gleason, left, announces a change to insurance policies that wrecked budgets during a workshop in Hoboken. Stevens 'gives students opportunities to engage in conversations in the classroom,' a goal the team had for Making Cents, she says.

And while they’re hoping versions of Stevens Making Cents take root elsewhere, the team hopes another group of students can continue the project next year. Verica Nakeva, who will graduate in the fall, made connections with students as an intern with P.G. Chambers School, but being in front of the classroom was rewarding in a different way.

“During our last workshop, one of the students came up to me and said, ‘Thank you so much, I learned so much,’” Nakeva said. “I feel like we left such an impact on those students — to see that direct correlation was special.”

“Even if one student is better prepared to take charge of their finances as a result, then it’s worth it to go back,” she said.