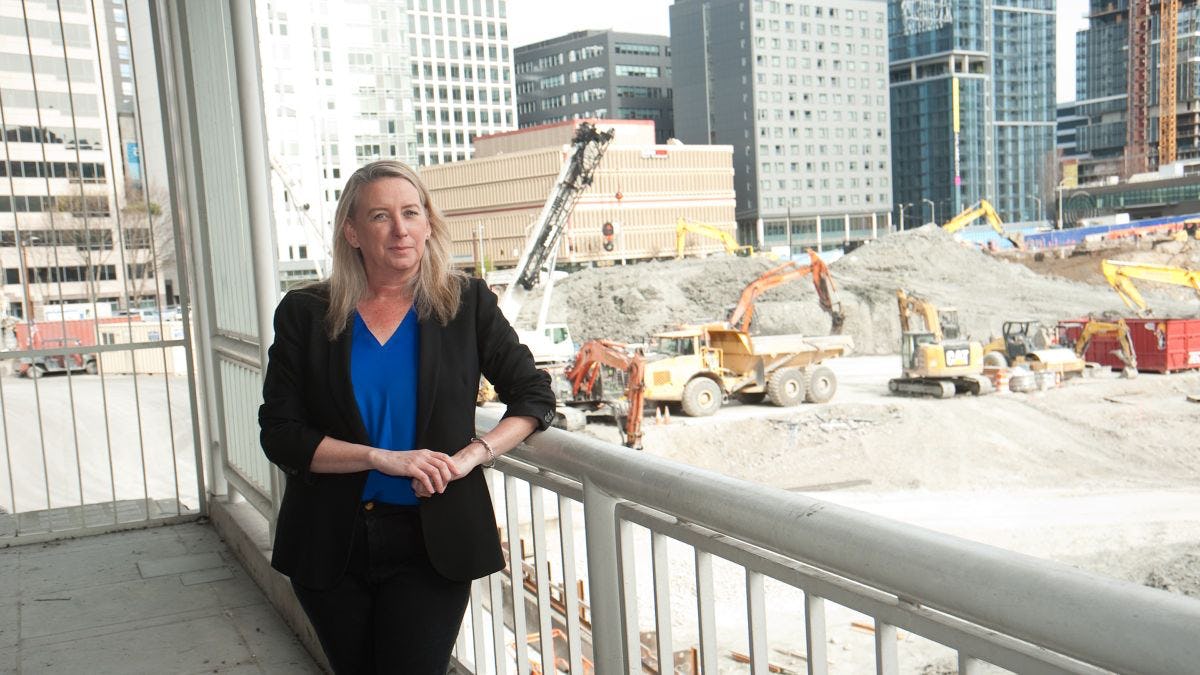 When Katie Twomey ’90 told her high school guidance counselor she wanted to become an engineer, she was told that “females can’t be engineers,” and that she should consider becoming a nurse.

Undeterred, Twomey immediately convinced her young female high school math teacher to teach a calculus class after school (her small Catholic school in Brooklyn didn’t offer it), petitioned the school to make it happen and took her first steps toward becoming an engineer.

This year marks Twomey’s 30th year with nationally-recognized Clark Construction Group, LLC, where she serves as a senior vice president. Throughout her career, she has led the design and construction of hospitals, convention centers, data centers, an auto manufacturing plant and other facilities across the country, totaling more than $3 billion. As committed as she is to excellence in her profession, she is equally driven to serve the people in the communities in which she builds, through a wide variety of volunteer work.

Twomey’s sense of duty also extends to the next generation of engineers. She is driven to help other women and underserved students develop their talents and build fulfilling and successful careers in the construction industry.

She never really thought much about being a woman in a male-dominated profession, she says.

“If I did, I didn’t acknowledge it. I was always driving ahead,” she notes. Twomey’s success is due, in part, to great role models —– from her parents, who encouraged her in math and science, to that high school math teacher, to her first manager at Clark, who was a woman. The other factor is her incredible drive; she has never been afraid to seize opportunities.

“Part of it was being an advocate for myself…you have to look out for yourself; you have to be your own advocate,” she adds. “I’ve never shied away from anything.”

Buoyed by people who believed in her, by her Stevens education and, mostly, by her own talent and determination, Twomey is now at the top of her profession.

Since 2016, Twomey has lived in Seattle with her family, where she is leading one of the largest and most complex construction projects in the city’s history. The $1 billion Washington State Convention Center Addition (WSCCA) will add 1.4 million square feet to the existing convention facility and includes a ballroom, flex space with an outdoor terrace, a 150,000-square-foot exhibit hall and a parking garage.

The project, slated for completion in 2021, has many challenging components, including moving site utilities, demolishing and replacing a bus terminal, and relocating a major downtown roadway, which ran through a portion of the project site. Structural steel work will commence on the project this summer, she says.

The WSCCA project is one in a long line of impressive projects that Twomey has delivered across the country. Other important highlights of her long career include a $430 million project for the Alameda County Highland Hospital in Oakland, California, a LEED Gold® project; a LEED Platinum® data center and office building headquarters for California ISO, Folsom, California, which earned the Design-Build Institute of America’s 2012 National Best Overall Project award; a replacement hospital and garage at Camp Pendleton in California, another LEED Gold® project which earned the Alliant Build America Award; General Motors’ 2 million square-foot Vehicle Engineering Center in Warren, Michigan; and an $880 million McCormick Place West Convention Center expansion in Chicago, among others.

Twomey was never going to be someone who was satisfied with a desk job.

“I love the operations side — working on the job and in the field,” she says. “I prefer to be hands on; I think it’s more exciting.”

So many of her projects have been rewarding, giving her a chance to learn about a variety of industries, she says. Her work with hospitals has made a lasting impression on her. “Hospitals are so personal,” she says. “These are the rooms where mothers have their babies. This is the neonatal unit where they’re going to save babies.”

Traveling the country and seeing her work is especially gratifying.

“You can imagine what a wonderful feeling it is to go back to a city and show your kids a building and say ‘I built that,’” she says.

Straightforward and frank, Twomey becomes especially thoughtful when she recalls how the Stevens Technical Enrichment Program became an early ladder to her success.

Before Twomey entered Stevens, she was required to take a computer science boot camp through STEP to help give her the skills that her high school hadn’t provided. She was active with STEP throughout her Stevens career and worked in the program’s office. Twomey says that she found much support at Stevens, from a scholarship that covered her room and board to the STEP program.

“That was hugely important,” she said of her time with STEP. “The school took the time, and that helped to start my career path.”

This senior engineer and married mother of two still, somehow, finds time to give back to her community. She mentors women and men coming up in the engineering field, and even women outside of engineering who need career guidance. Her company’s philosophy of giving back to the community has been long-lasting so, over the years, wherever in the country she was working, she and her team have participated in food drives, volunteered at soup kitchens and rebuilt homes for local people in need. She has also mentored students from underrepresented communities through various programs, including the company’s A. James Clark Scholars Program, which is offered at a number of universities across the country, including Stevens. The program gives financial support and enhanced learning opportunities to exceptional undergraduate students who are underrepresented in the engineering field.

A. James Clark, the company’s late owner, always instilled a sense of community pride in his employees, and a sense of duty, Twomey says. It is a philosophy that she has taken to heart.