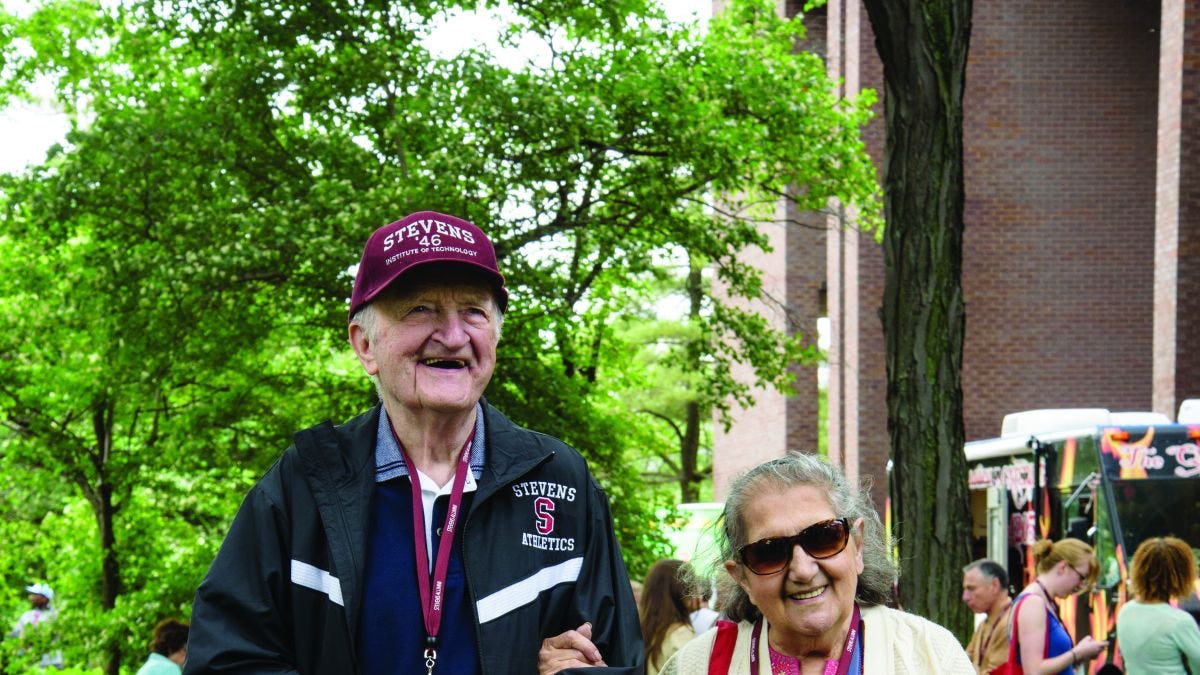 Joe Schneider ’46 and Nancy Catello were a warm and welcome presence at many Stevens events.

Those who knew him agree. Alphonse Joseph Schneider ’46 — Joe to everyone — was one of a kind in this world. Vibrant — working and driving, incredibly, well into his 90s. Remarkably humble and remarkably generous. Someone who showed up, early.

He lived almost a century — proudly serving his country during World War II and working in the embroidery business for close to 80 years, during and long after northern New Jersey was the “Embroidery Capital of the World.” Schneider was a true original who had a street named after him in his adopted hometown of Guttenberg, New Jersey — and who supported the alma mater that made all the difference for him.

Schneider, who passed away on January 2, 2022, at the age of 97, was a stalwart of Stevens. In addition to supporting many causes — from student scholarships to athletics to the performing arts — he was ever-present on campus. Schneider, and for many years his sister-in-law, Nancy Catello, attended musical concerts, Alumni Weekends, Old Guard Luncheons, his beloved Stevens Metropolitan Club luncheons (he was its longtime treasurer), Stevens Alumni Association (SAA) meetings, lectures. He was a joyful, comforting presence.

“What sticks with me about Joe is his humility and his generosity,” says Stevens Director of Athletics Russ Rogers. “I’ll never forget how much he appreciated it when I sent him a thank-you note. Here’s someone who gave so much to Stevens, and he’s thanking me! He was that kind of person.

“To me, he stood for everything we want our students to be.”

His memory lives on through the many scholarship students he helped, in the Schneider Bleachers near the baseball field, in the student lounge named in his honor inside the new University Center Complex. But Schneider, who received Stevens’ Lifetime Service Award in 2014, will be mostly remembered for his spirit.

“Joe Schneider was one of a kind. His ready smile, love for Stevens, natural inquisitiveness and exuberance for life were truly inspirational. I will miss seeing him at campus and alumni events, as will so many of his Stevens friends,” says Stevens President Nariman Farvardin.

“Joe often spoke of the difference that a Stevens education made in his life, and he never forgot that. Through his generosity, he ensured that young people in need also benefited from a Stevens education. He lifted people up — students, his fellow alumni, all of us — and his legacy of humility and kindness lives on.”

“He was always just there — and always thinking of others,” says Michael Governor, of Stevens’ Division of Development and Alumni. “Altruism kept him young.”

In a 2019 interview with The Stevens Indicator alumni magazine, Schneider said he got the break of his life when his high school teacher warned him to straighten up and study, so he could attend college. (He won a partial scholarship to Stevens.) His second biggest break was joining the Navy V-12 program, earning free Stevens tuition. 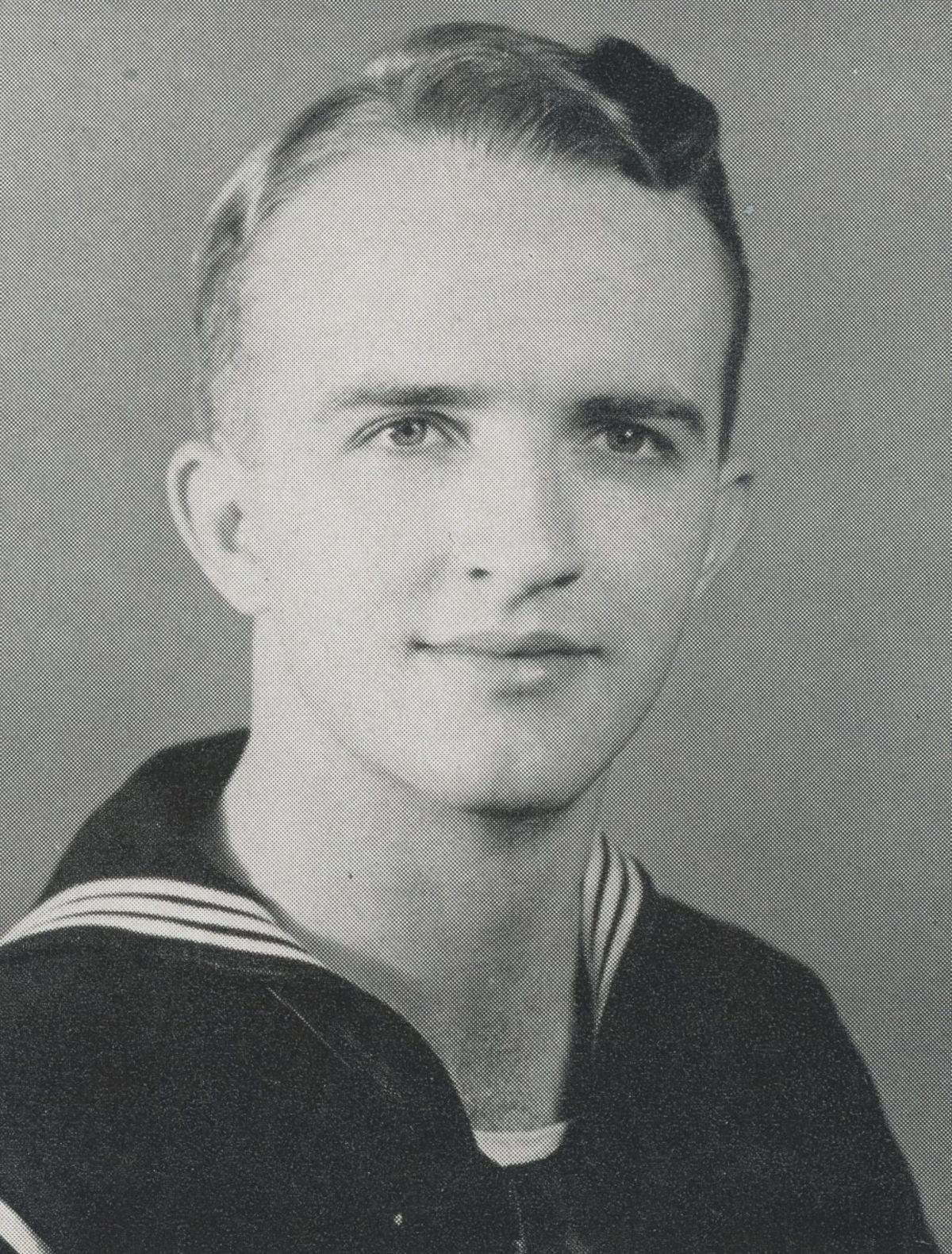 While participating in the Navy V-12 program at Stevens, which trained young officers for the war, he also played trombone in the Navy band, played lacrosse and basketball for Stevens, worked with The Link yearbook and participated in the Glee and Newman clubs. Schneider later served in the Pacific Theatre during World War II. After the war, he returned to Guttenberg, to his family’s embroidery business. Schneider’s aunt and uncle had opened the embroidery shop in 1917, and young Joe learned the trade as a teenager. In 1953, he opened his own shop, which produced eyelet embroidery and lace for ladies’ dresses and undergarments, First Communion dresses, shoes and ties. Schneider worked well into his 90s.

At Stevens, he served as an SAA decade representative for more than 40 years. He also supported veterans causes and served as commander of American Legion Post 365.

He made many friends at Stevens, like Richard Harries ’58. Harries remembers how their conversations always started and ended in German. (Schneider was a proud Swiss German.) They shared a love of the local German butchers, bakeries and music — and of their alma mater.

“He was an example of what every single Stevens graduate could wish or hope to be. The guy was just a good character.”

Anita Lang, the retired longtime Stevens Alumni Association executive director and a friend, remembers Schneider’s incredible energy — from driving into his mid-90s to caring for stray cats in the neighborhood.

“He was very supportive of the students,” she adds. “There were no airs about Joe. He and Nancy were both very down to earth.”

Schneider was predeceased by his wife, Frances, and his sister-in-law, Nancy Catello.

Recently, Schneider had slowed down. But his Stevens friends, like Marty Valerio ’68, recall his good spirits — and his determination that he always provide lunch for them when they visited. “Of all Joe’s characteristics, the one that shines the brightest was his deep sense of appreciation and gratitude,” says Dick Magee ’63.

A lasting memory for his friends: Schneider’s 95th birthday, which fell during a dinner for Stevens benefactors. Everyone launched into “Happy Birthday” — with Schneider joyfully singing along.