Snapshots From The 2022 Innovation Expo 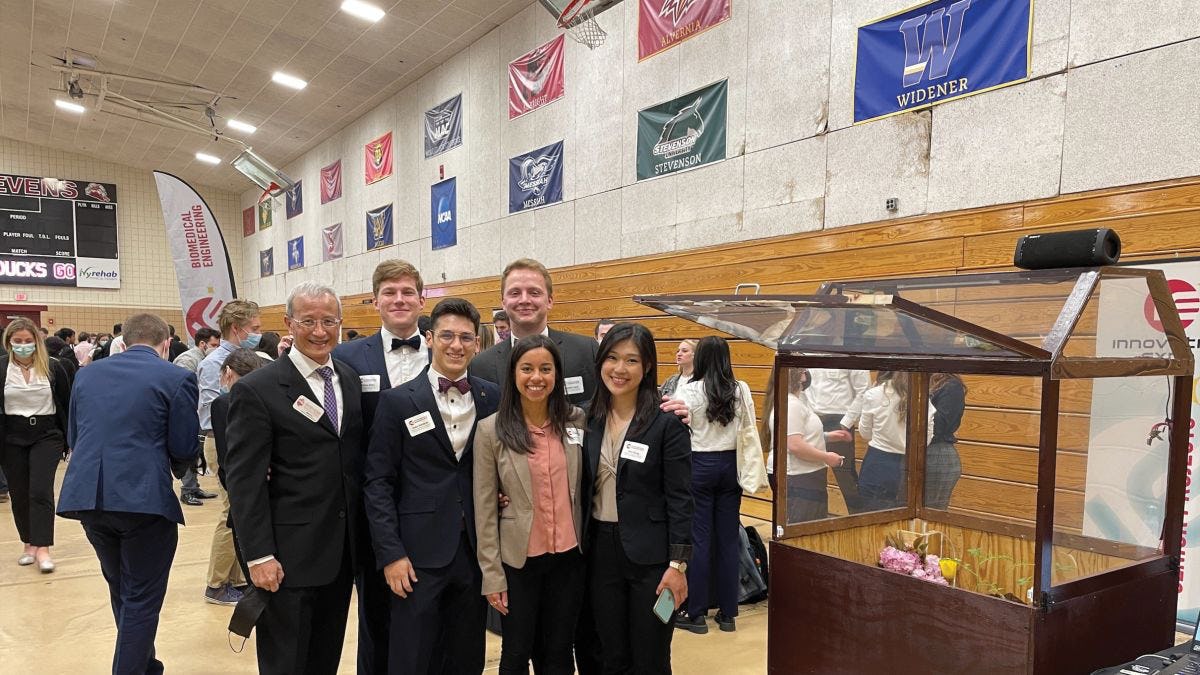 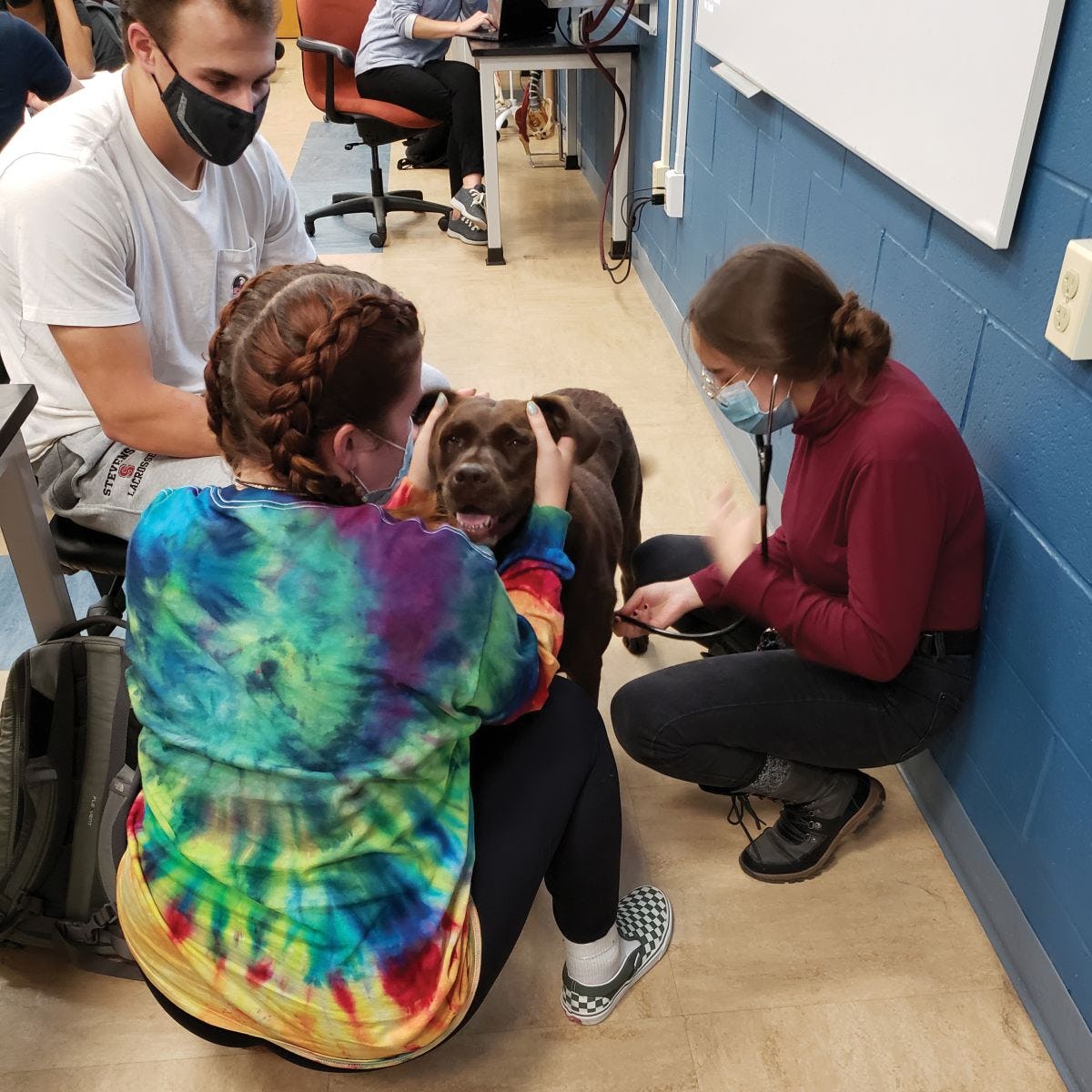 Sadie Clark (foreground), Henry Johnson and Aleese Mukhamedjanova, pictured here with Mocha, developed a wearable monitor to quickly alert veterinarians when an animal is in danger.

Animals get sick and tired, but sometimes it’s hard for us to tell they’re suffering. That’s why two teams of Stevens biomedical engineering students designed technology that can better enable us to monitor their health.

Sadie Clark, Henry Johnson and Aleese Mukhamedjanova developed a wearable monitor to quickly alert veterinarians when an animal is in danger. It works by listening to heart and lung sounds, then converting them into a digital signal that’s processed to calculate heart and respiratory rates. Another team of Michael Blas, Salvatore DiMaggio, Ashleigh Nagy and Amber Porrett prototyped technology that can sound an alarm when military working dogs are feeling excessive heat, stress or other health strains.

What’s next: Professor Vikki Hazelwood, who advised both teams, says it’s possible next year’s class of seniors could take up one or both of the projects and continue development. 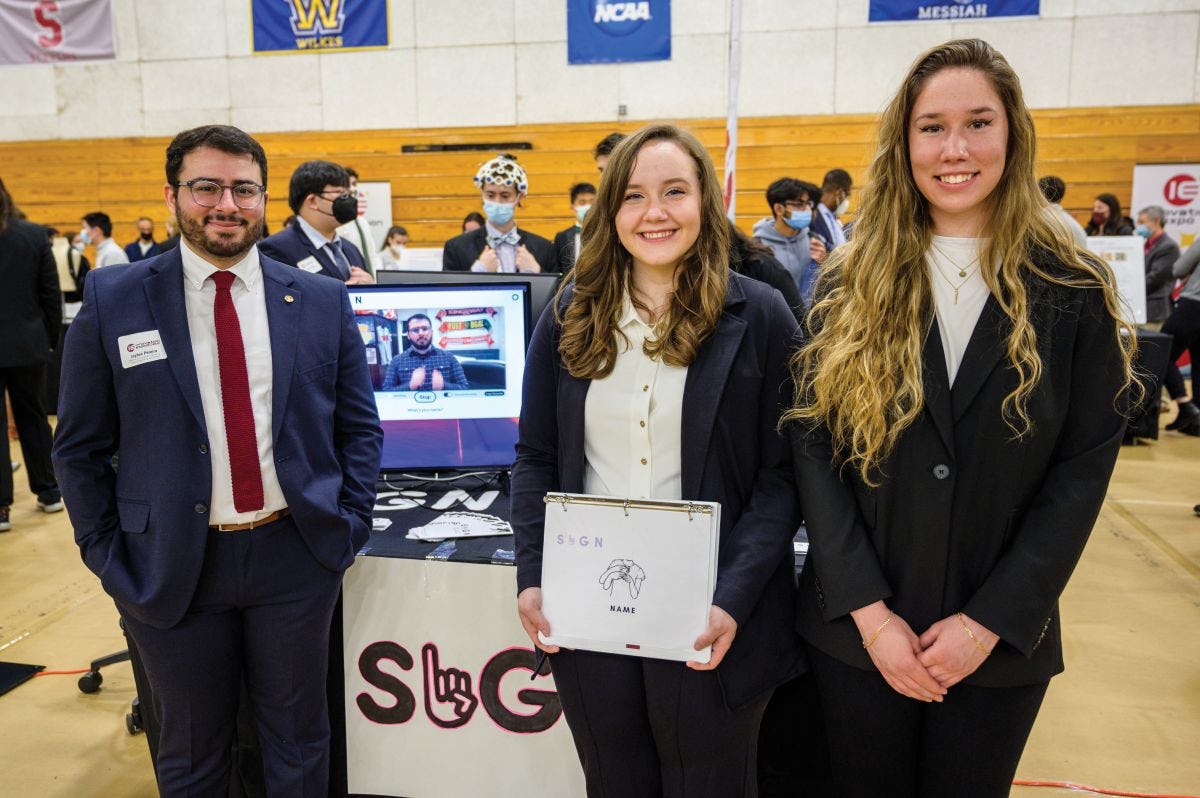 American Sign Language (ASL) is practiced by an estimated 1 million people in the U.S. alone, and 35 million Americans report some difficulty hearing or speaking. Yet ASL can be challenging to understand for those who have never learned it.

What’s next: The team eventually hopes to make its software publicly available, free of charge.

Watch this video to learn more. 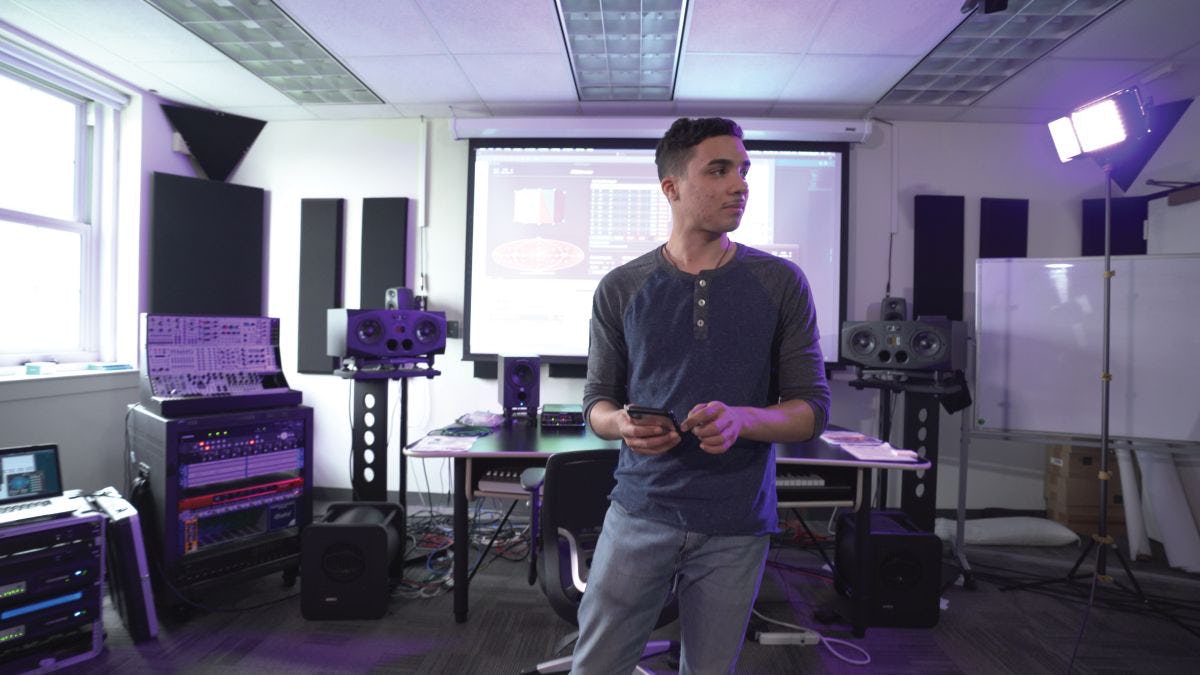 Working with Stevens professor (and composer) Lainie Fefferman, College of Arts and Letters senior Randy Zoquier created an immersive audio-visual experience he calls Silva. The experience consists of two distinct rainforest and oceanside environments using an array of speakers and lights. Visitors personalize the show, using smartphones — and their companions can tap into the same experience with their own devices.

What’s next: Zoquier has no immediate plans to mount the work elsewhere — but he does hope to exhibit it again at some point.

Check out this video to see Silva in action. 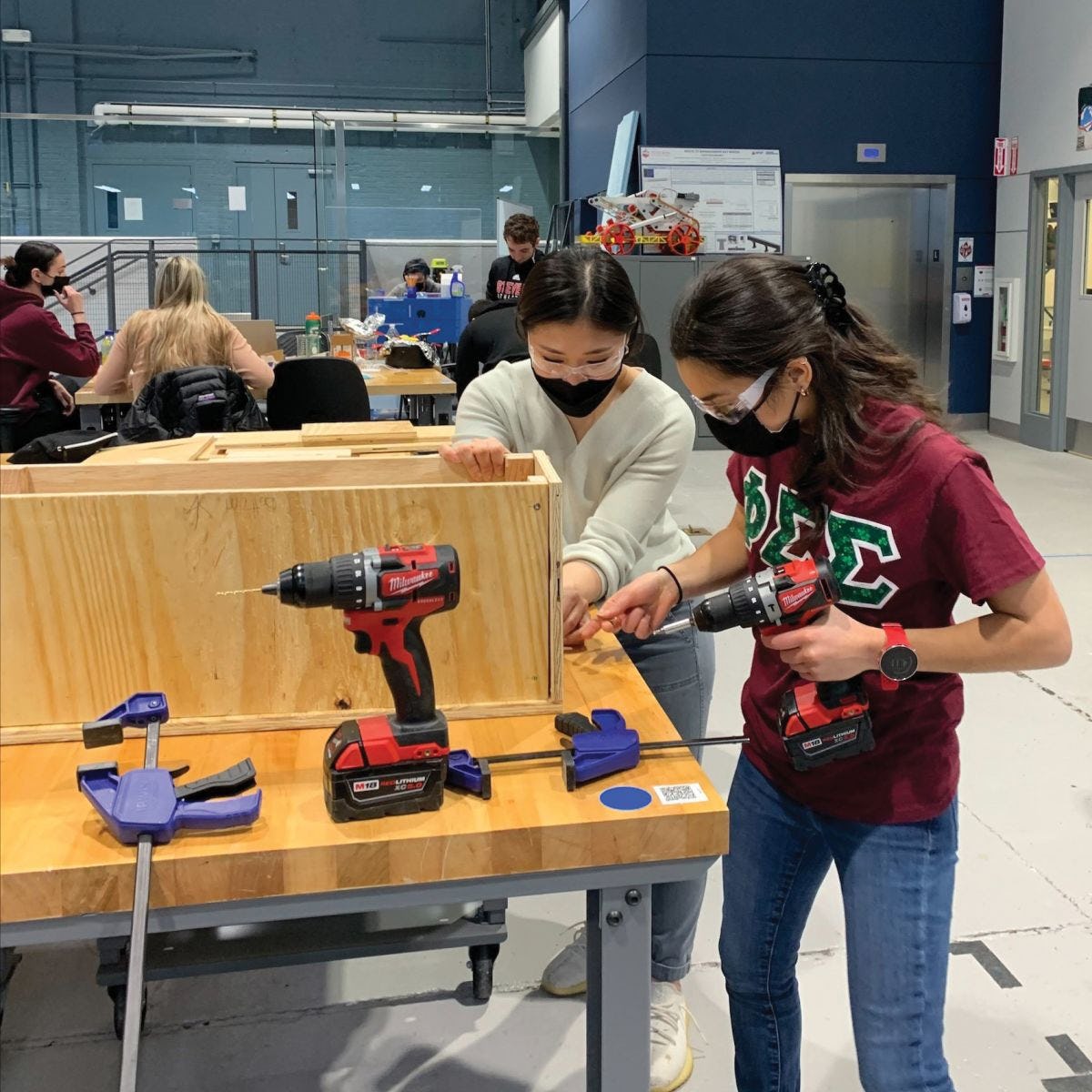 Julia Chung (left), and Grace Miguel build drawers for a greenhouse for their team’s IntelliVeggie system.

Big Produce has plenty of tools and IT to monitor and battle weather, pests, supplies and other challenges. Now a five-member Stevens team (William Baltus, Julia Chung, Jon Cucci, Justis DiBattista and Grace Miguel) wants to bring computing power and AI to small farmers and home gardeners, too. Their networked system of sensors and software, known as IntelliVeggie, puts major-league analytics and a specially prefabricated greenhouse in the hands of smaller growers — at a fraction of the cost.

What’s next: As some team members begin graduate school and some enter the world of work, the group continues seeking capital to develop the system further.

Read more about the team and IntelliVeggie. 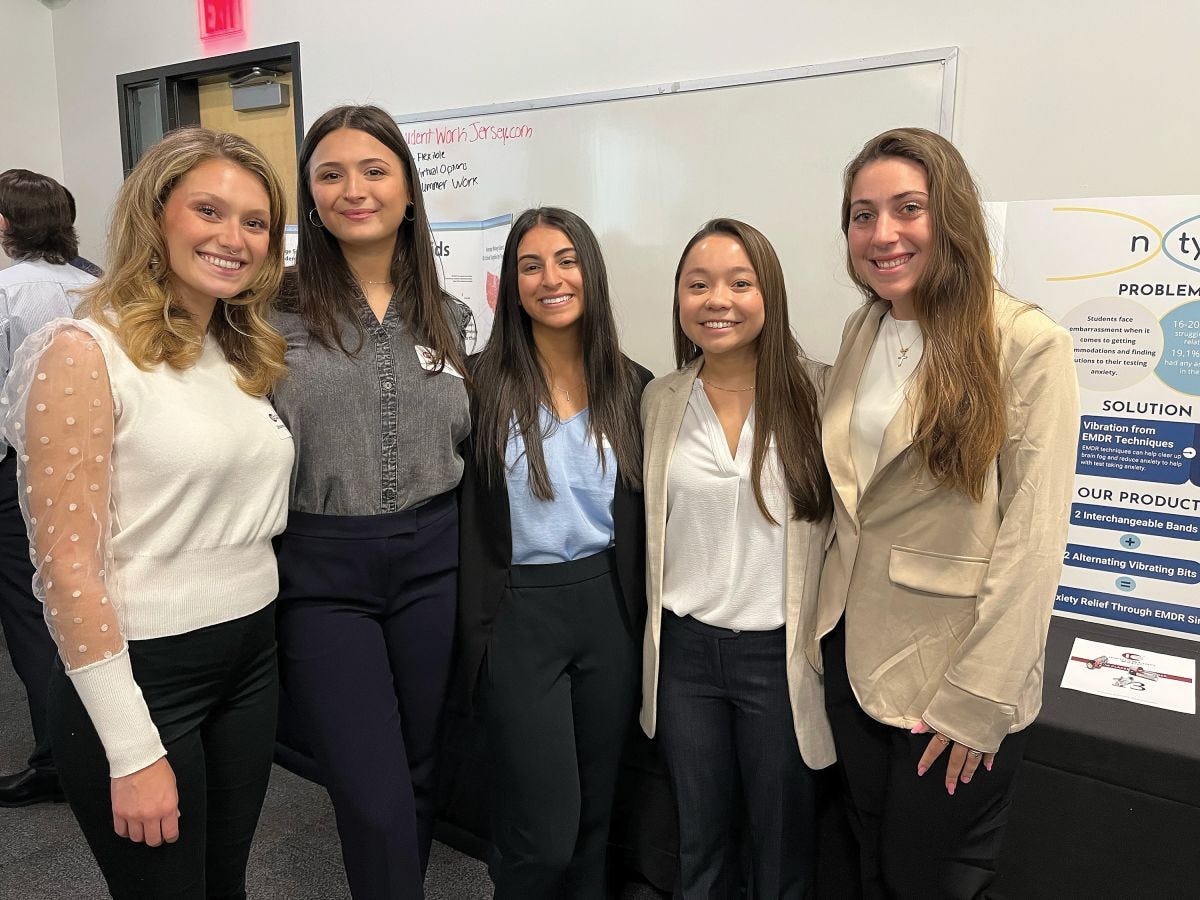 The Stress-Reducer on Your Wrist

What’s next: Team members are all moving on to new careers and graduate studies, but Giarratana says the group will continue working toward patent protection as a next step toward potential future development and commercialization of the product.