1: From Concept to Completion 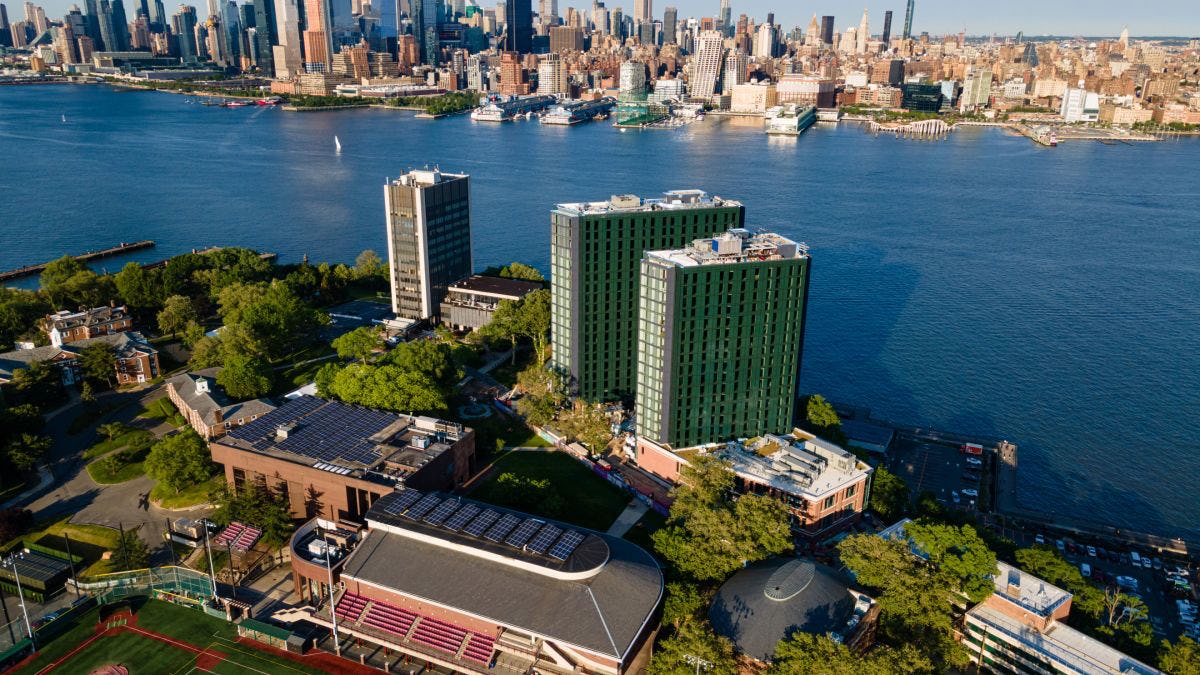 The new 395,000-square-foot University Center Complex comprises two residence hall towers and one three-story university center. The facility is the tallest building on Stevens’ campus and boasts incredible views of the Hudson River and Manhattan skyline.

From the building’s first mention in 2012 as part of Stevens’ 2012-2022 strategic plan, The Future. Ours to Create., through its opening to residential students in August 2022, realizing the University Center Complex has been a ten-year, community-wide effort. At the building’s ribbon-cutting event in May 2022, Stevens President Nariman Farvardin reflected on the project’s journey. “Ten years ago, this facility started as a suggestion. It went into our strategic plan as a promise. It then became a plan, and today it is a reality that brings a tremendous amount of pride to this institution,” he said. “The University Center Complex is an unmistakable symbol of the progress Stevens has made over the last decade, and signals to the world to keep watching this institution as it continues its ascent to higher levels of achievement and prominence.” 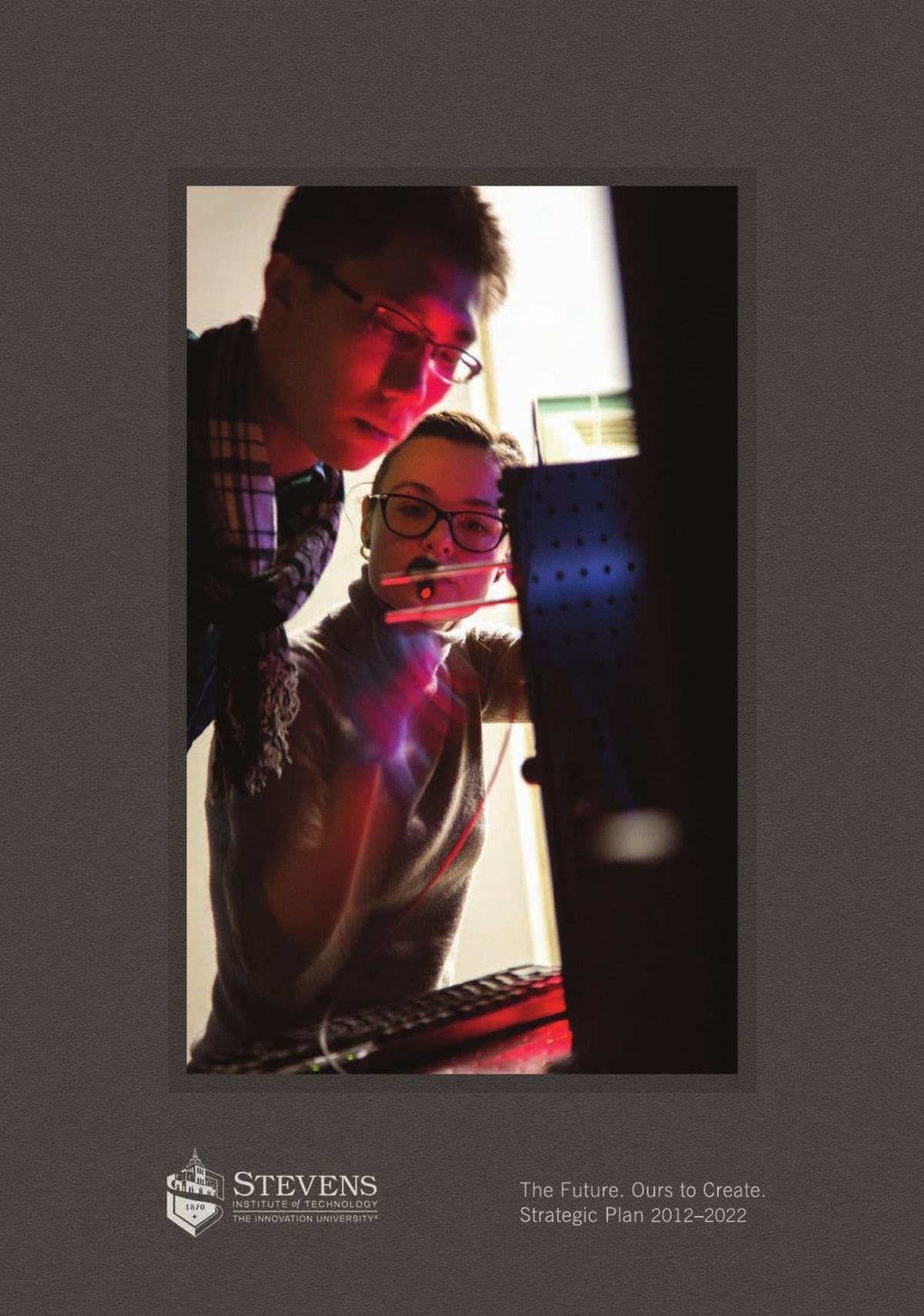 Stevens publishes its 2012-2022 strategic plan, The Future. Ours to Create. Among the plan’s lofty 10-year goals: “The construction of a University Center that will function as the heart of the University and a hub of student, faculty, staff and visitor interactions.”

Initial planning begins for two separate buildings — a 1,000-bed student housing project and a university center. Not long after the design process begins, the concept for the two buildings merges into one single state-of-the-art facility.

Stevens presents its infrastructure improvement plans to The Hoboken Planning Board. 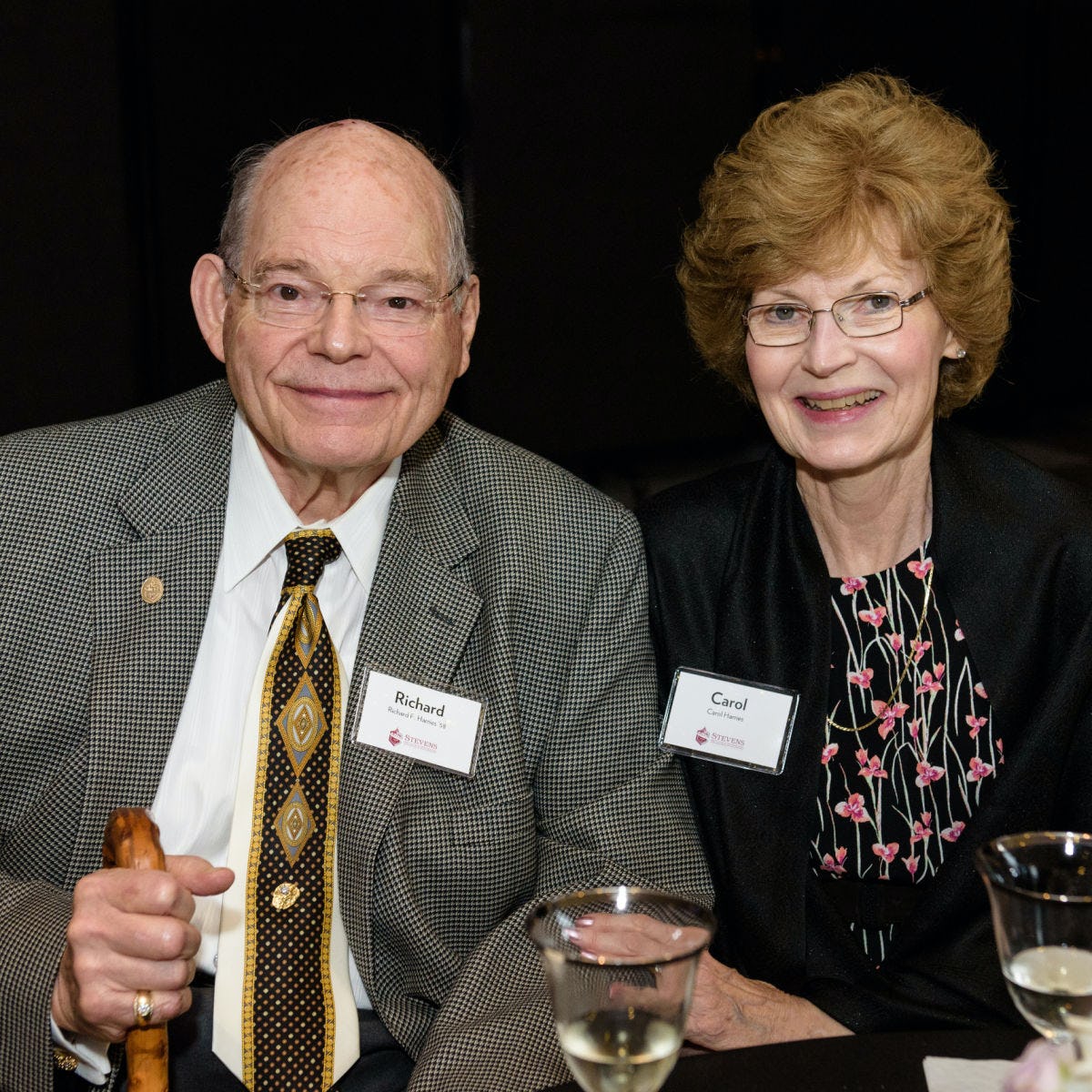 Richard F. Harries ’58 and his wife, Carol, make the largest single gift to Stevens in university history, supporting The Power of Stevens fundraising campaign and the University Center Complex. The Carol J. and Richard F. Harries Residential Tower is named in their honor. In addition to his financial support of the project, Harries participates in the planning and design of the building, drawing on his expertise from his lifelong career in the construction industry. 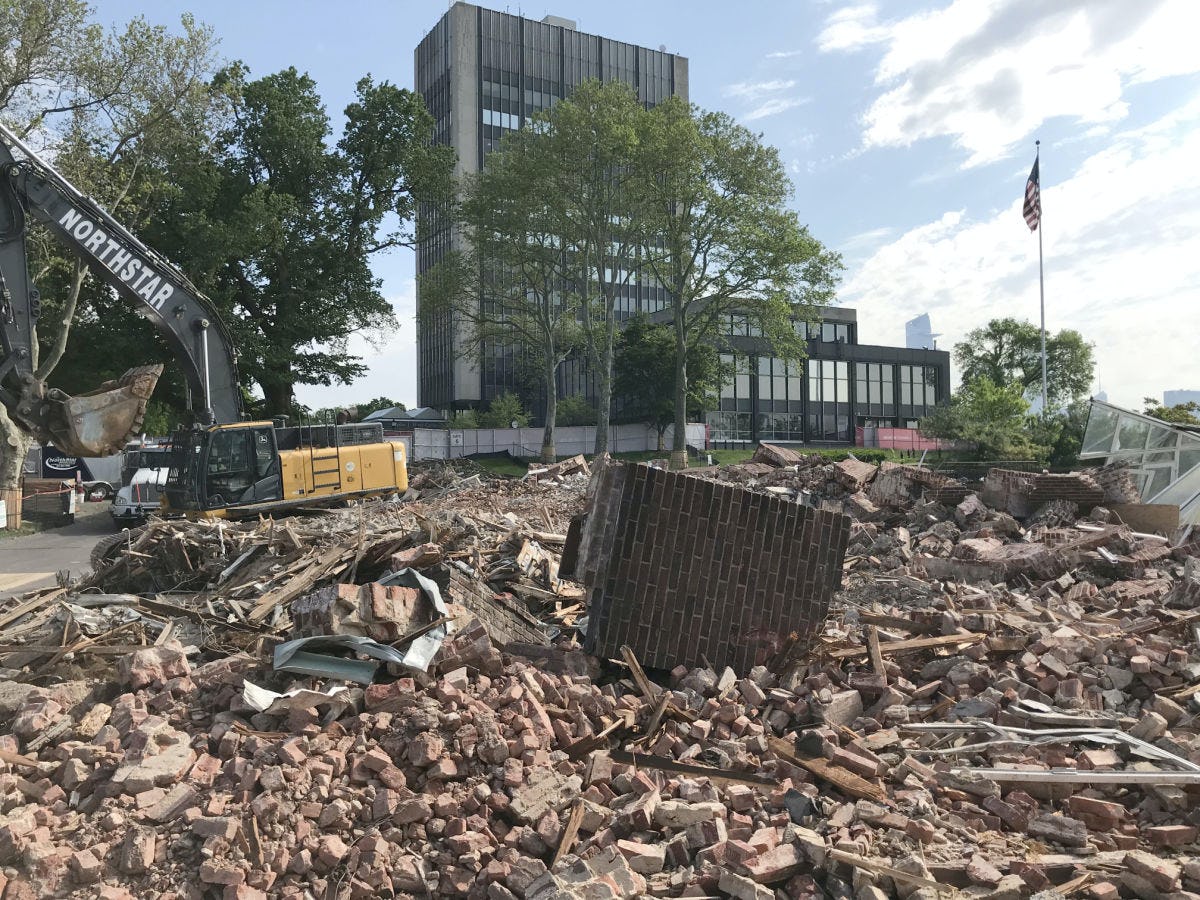 Following two years of collaboration between the Stevens community, the City of Hoboken and campus neighbors, Hoboken City Council approves an ordinance creating a new University District zone in Hoboken. Rezoning enables the construction of two residential towers atop a three-story university center at Stevens and creates opportunities for future campus development.

Abatement, demolition and excavation of the site of the future University Center Complex begins, starting with the demolition of Jacobus Hall. Hayden Hall abatement begins after May graduation and is demolished during summer 2019. 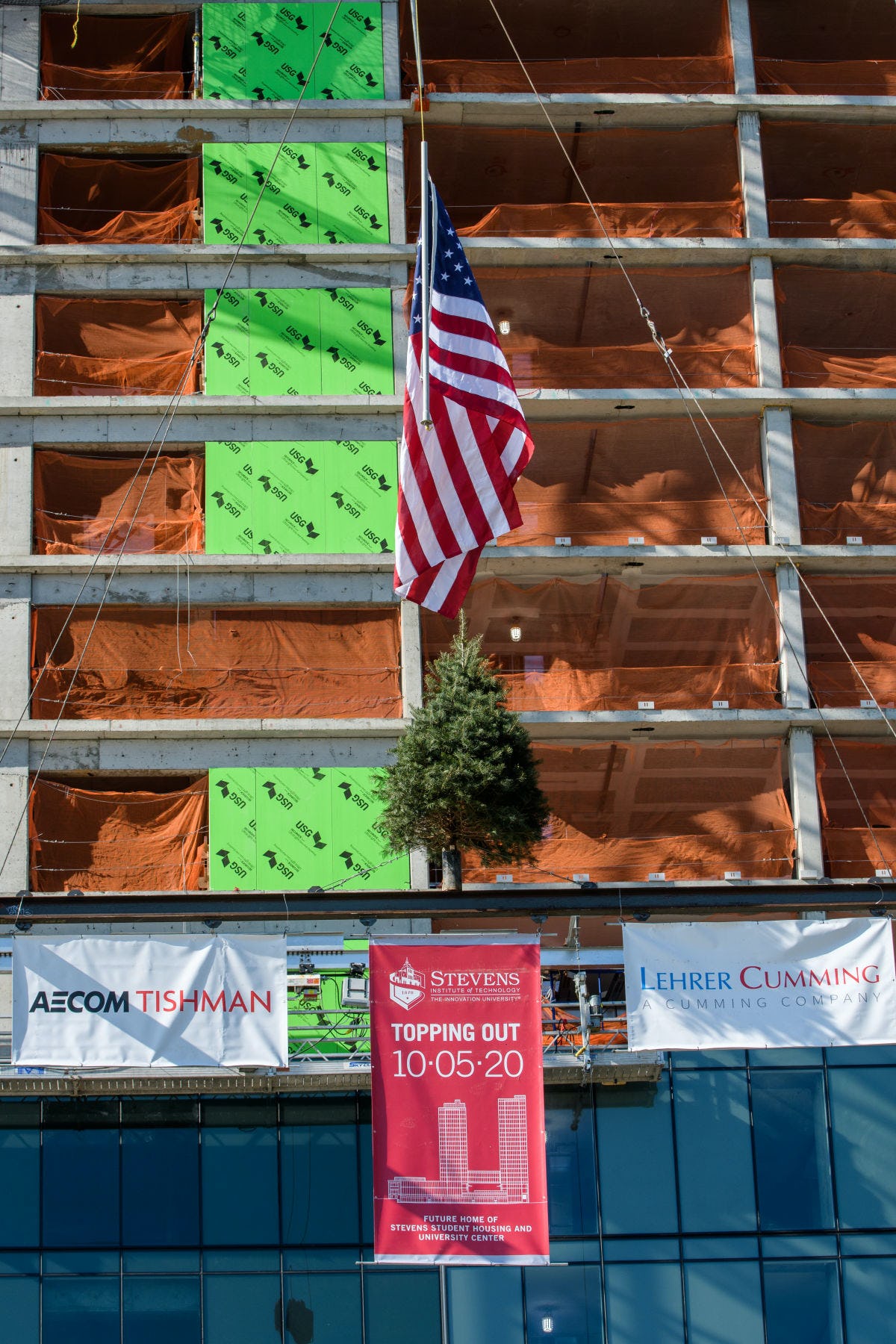 A “topping out” ceremony commemorates the completion of the building’s superstructure. President Farvardin hosts a small celebration, inviting distinguished guests to watch the laying of the final beam on the top of The Carol J. and Richard F. Harries Residential Tower.

Installation of the building’s glass facade is completed. Full enclosure of the building allows a crew of more than 450 construction personnel to work on interior spaces regardless of the weather. 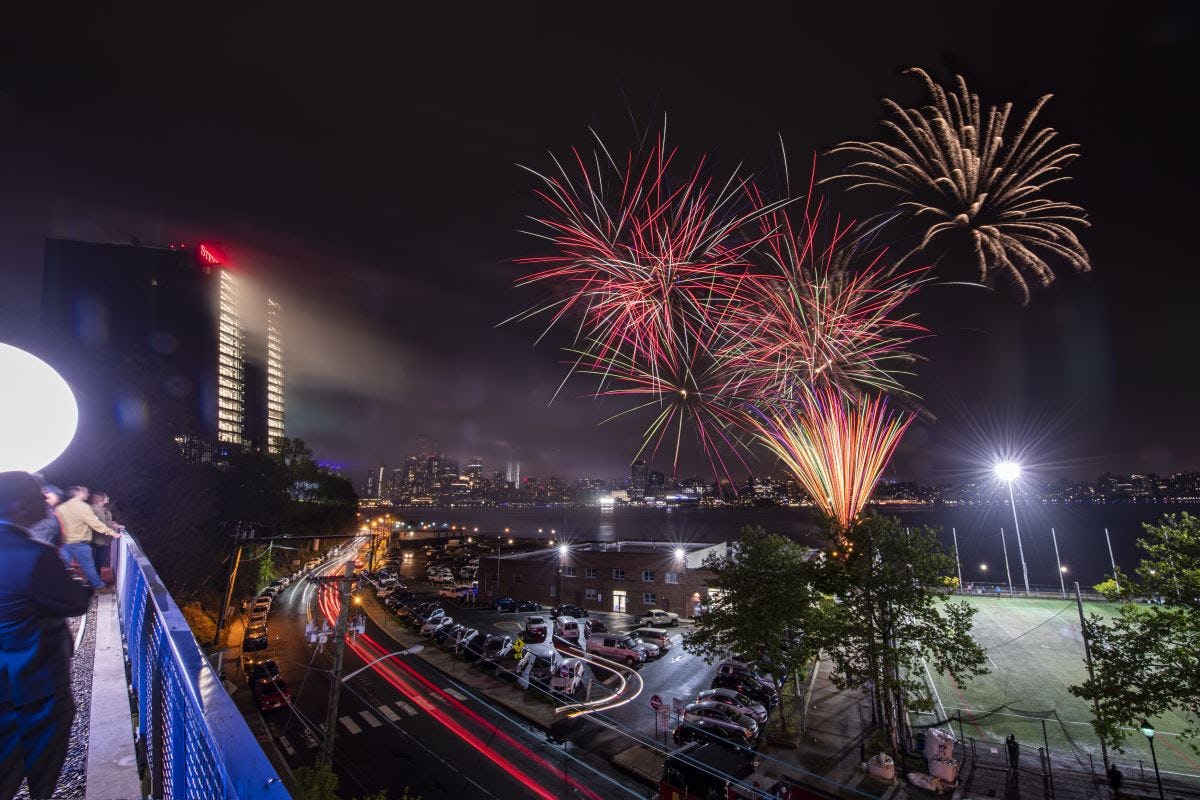 A grand illumination ceremony and fireworks display honors the first lighting of the Stevens sign atop the University Center Complex’s South Tower. Visible from Manhattan, the sign is a symbol of Stevens’ past 10 years of progress, partnership with the City of Hoboken and bright future ahead. 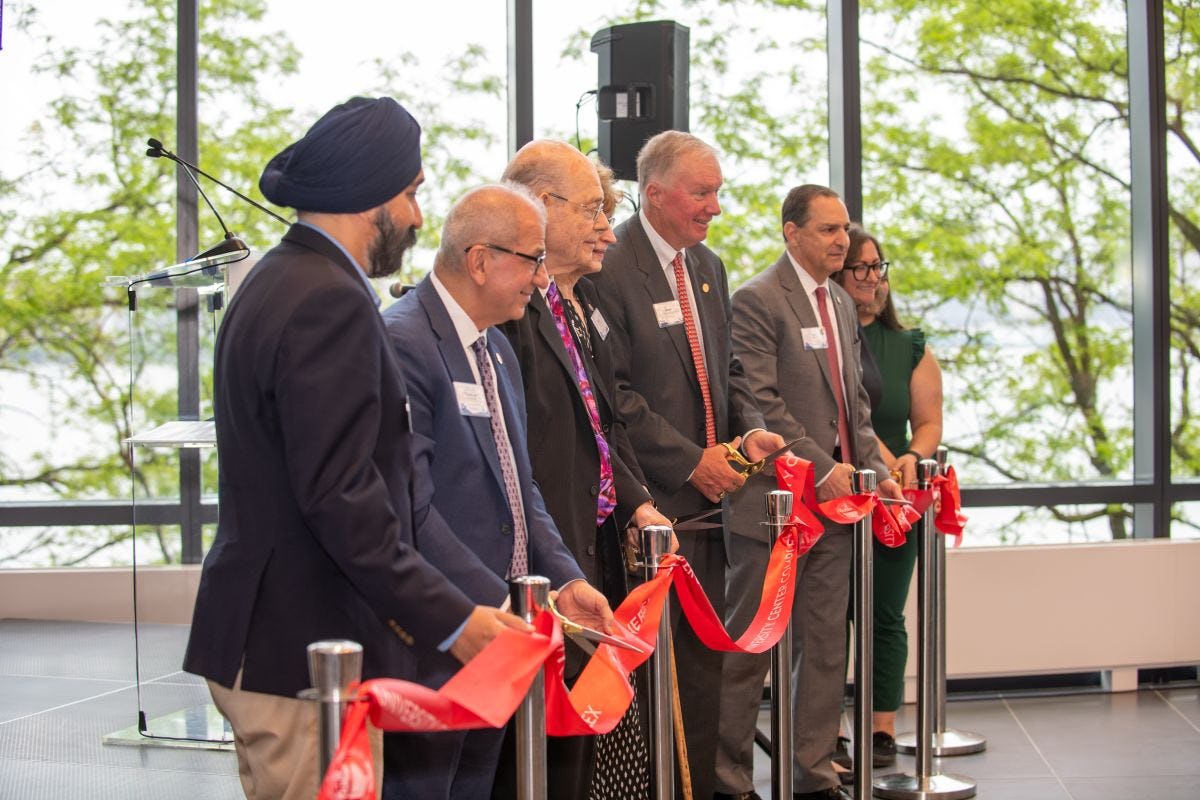 The Stevens community gathers to celebrate the official opening of the University Center Complex as well as the recent conclusion of the $200 million The Power of Stevens campaign — the largest and most successful in Stevens’ history. 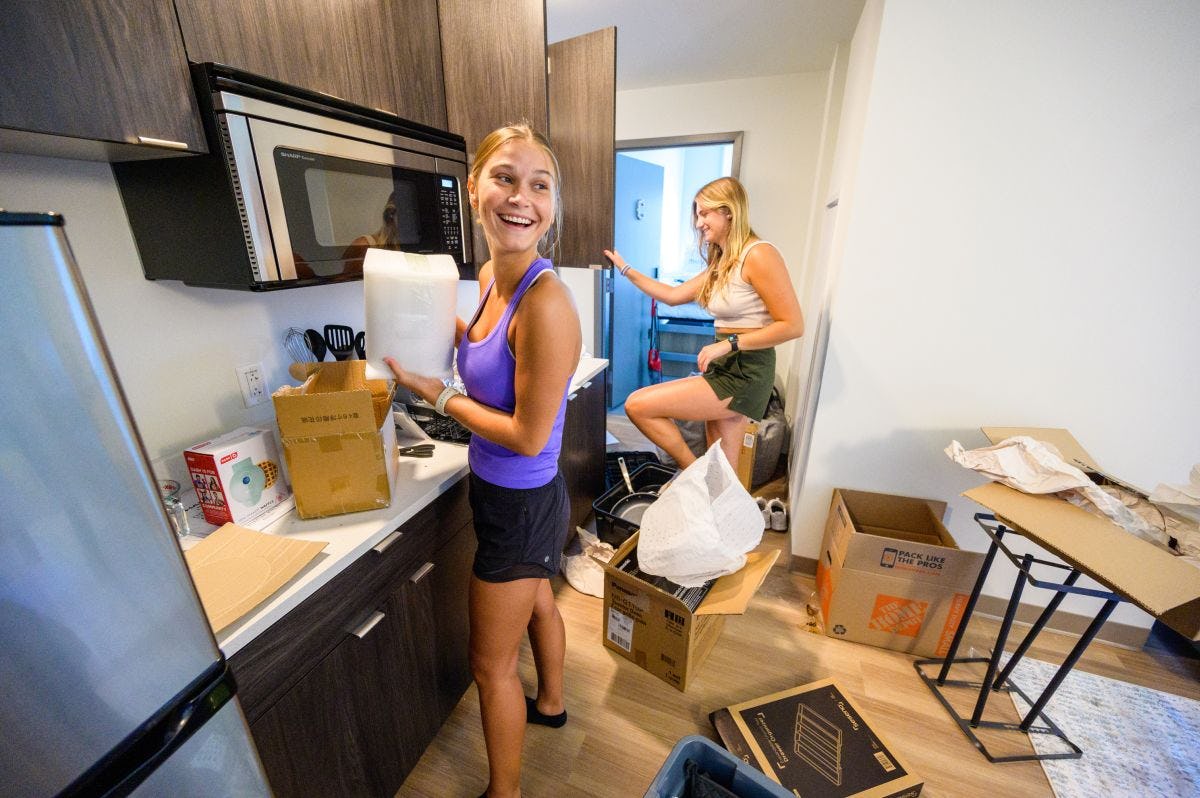 Students move into the new residential towers to begin the Fall 2022 semester.

University Center Complex by the Numbers