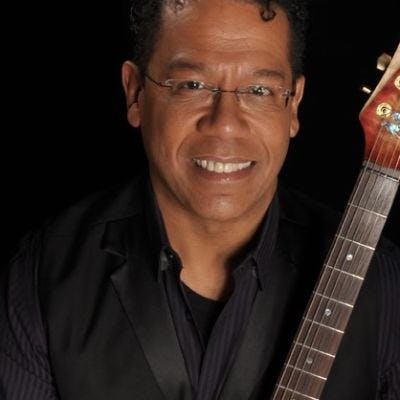 Lecturer and Guitarist Carlos Alomar is a beta tester for Gibson guitar, Moog guitar, Spector guitars and Brian Moore guitars. He does demonstations at trade show and musical events.
He extensively researched the sythesizer guitar (1980-present) and recorded a synthesizer-guitar journey of sound and textures which demonstrated his research entitled "Dream Generator."
Currently Carlos continues his research as the Director/founder of the Sound Synthesis Research Center (S.S.R.C.) at Stevens Institute of Technology in Hoboken, N.J.

Carlos currently sits on the Board of Governors for the National Academy of Recording Arts and Sciences representing all composers and arrangers in the Greater New York area. He has also served as their first Latino Trustee, N.Y. Chapter president and as National Vice Chairman of the Board of Trustees for this "GRAMMYS" organization.
Carlos is the co-founder of the National Rock Movement of Puerto Rico.
He also sits on the Board Of Advisors for the Latin Grammys as well as on the Board for the Latin Hall of Fame awards.

Carlos is the recipient of 32 Gold or Platinum records and has recently been awarded a Diamond Album for his work on "Uptown Funk" by Mark Ronson featuring Bruno Mars.
In Japan, Alomar received the “Producer of the Year" award for his work with the jazz group “CASIOPEA.”
His administrative experience has gained his Production Company (Guitarlos Ltd.) and Publishing Company (100 M.P.H. Music) numerous awards and Plaques from The American Society of Composers Authors and Publishers (A.S.C.A.P), as well as The Recording Industry Association of America (R.I.A.A.).
In 2005 Carlos received a TEC award for “soloist of the Year” for his outstanding guitar work.