Engaging new students in a shared intellectual task before the start of their first semester at Stevens can ease the transition into college.

Over the summer, incoming first-year students will receive a copy of a prominent work of either literature or nonfiction to read prior to arriving to campus in August.  During New Student Orientation, new students participate in small, faculty and staff-led discussion groups focused on the reading.  Discussion groups gather informally and are based on Orientation groups already established for New Student Orientation. Faculty and Staff members are paired with Peer Leaders who assist with the facilitation of the conversation about the reading.  This format is designed to give new students an engaging atmosphere in which to interact with faculty and staff members and begin to contribute to a college-level discussion.

The reading program will provide new students the following:

A guide created by the Samuel C. Williams Library staff for the 2022 First Year Reading program's pick, The Pleasures and Sorrows of Work, by Alain de Botton is available here.

We are eager to see the ways that students engage with The Pleasures and Sorrows of Work, by Alain de Botton. This is an optional reading contest meant to highlight and showcase the different perspectives students have after reading our 2022 First Year Read book. The first place winner will receive a $200 bookstore credit. The second place winner will receive a $100 bookstore credit. Pick one of the prompts listed below and create a submission that captures the essence of the prompt or question.

All contest entries can be submitted by August 12, 2022 to [email protected] 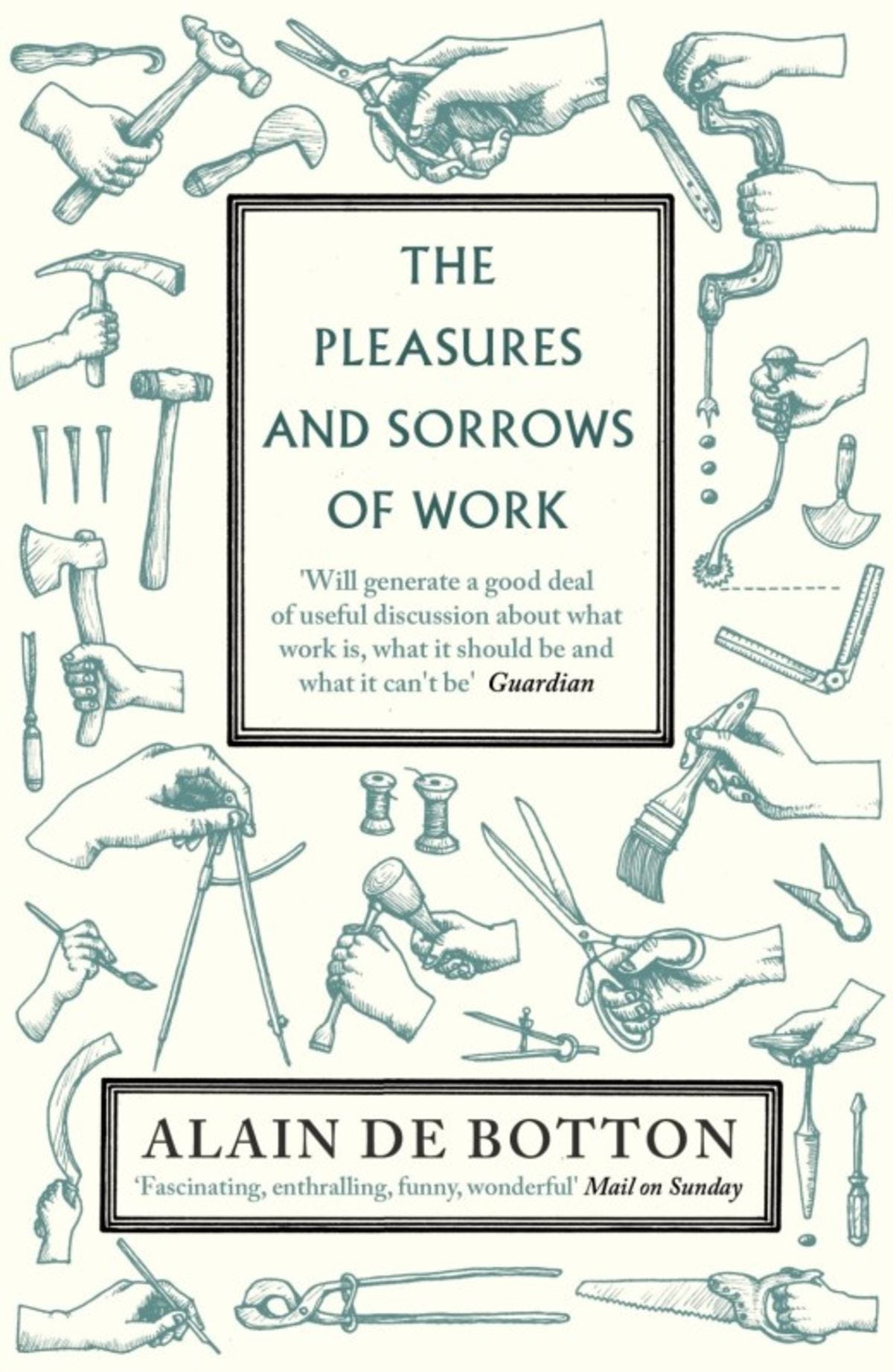 The Pleasures and Sorrows of Work by Alain de Botton

We spend most of our waking lives at work—in occupations most often chosen by our inexperienced younger selves. And yet we rarely ask ourselves how we got there or what our jobs mean to us.

The Pleasures and Sorrows of Work is an exploration of the joys and perils of the modern workplace, beautifully exploring what other people wake up to do each day—and night—to make our frenzied world function. With a philosophical eye and his signature combination of wit and wisdom, Alain de Botton leads us on a journey around an eclectic range of occupations, from rocket scientist to biscuit manufacturer, from accountant to artist—in search of what makes jobs either soul-destroying or fulfilling.

We live in the age of the algorithm. Increasingly, the decisions that affect our lives—where we go to school, whether we get a car loan, how much we pay for health insurance—are being made not by humans, but by mathematical models. In theory, this should lead to greater fairness: Everyone is judged according to the same rules, and bias is eliminated.Tracing the arc of a person’s life, O’Neil exposes the black box models that shape our future, both as individuals and as a society. These “weapons of math destruction” score teachers and students, sort résumés, grant (or deny) loans, evaluate workers, target voters, set parole, and monitor our health. O’Neil calls on modelers to take more responsibility for their algorithms and on policy makers to regulate their use. But in the end, it’s up to us to become more savvy about the models that govern our lives. This important book empowers us to ask the tough questions, uncover the truth, and demand change.

What The Eyes Don't See: A Story of Crisis, Resistence, and Hope in an American City by Dr. Mona Hanna-Attisha

Here is the inspiring story of how Dr. Mona Hanna-Attisha, alongside a team of researchers, parents, friends, and community leaders, discovered that the children of Flint, Michigan, were being exposed to lead in their tap water—and then battled her own government and a brutal backlash to expose that truth to the world. Paced like a scientific thriller, What the Eyes Don’t See reveals how misguided austerity policies, broken democracy, and callous bureaucratic indifference placed an entire city at risk. And at the center of the story is Dr. Mona herself—an immigrant, doctor, scientist, and mother whose family’s activist roots inspired her pursuit of justice.

What the Eyes Don’t See is a riveting account of a shameful disaster that became a tale of hope, the story of a city on the ropes that came together to fight for justice, self-determination, and the right to build a better world for their—and all of our—children.

The Sixth Extinction by Elizabeth Kolbert

Over the last half a billion years, there have been five mass extinctions, when the diversity of life on earth suddenly and dramatically contracted. Scientists around the world are currently monitoring the sixth extinction, predicted to be the most devastating extinction event since the asteroid impact that wiped out the dinosaurs. This time around, the cataclysm is us. The sixth extinction is likely to be mankind's most lasting legacy; as Elizabeth Kolbert observes, it compels us to rethink the fundamental question of what it means to be human.

In 2004, four Latino teenagers arrived at the Marine Advanced Technology Education Robotics Competition at the University of California, Santa Barbara. They were born in Mexico but raised in Phoenix, Arizona, where they attended an underfunded public high school. No one had ever suggested to Oscar, Cristian, Luis, or Lorenzo that they might amount to much—but two inspiring science teachers had convinced these impoverished, undocumented kids from the desert who had never even seen the ocean that they should try to build an underwater robot.

The Immortal Life of Henrietta Lacks, by Rebecca Skloot

Her name was Henrietta Lacks, but scientists know her as HeLa. She was a poor black tobacco farmer whose cells - taken without her knowledge in 1951 - became one of the most important tools in medicine, vital for developing the polio vaccine, cloning, gene mapping, in vitro fertilization, and more.