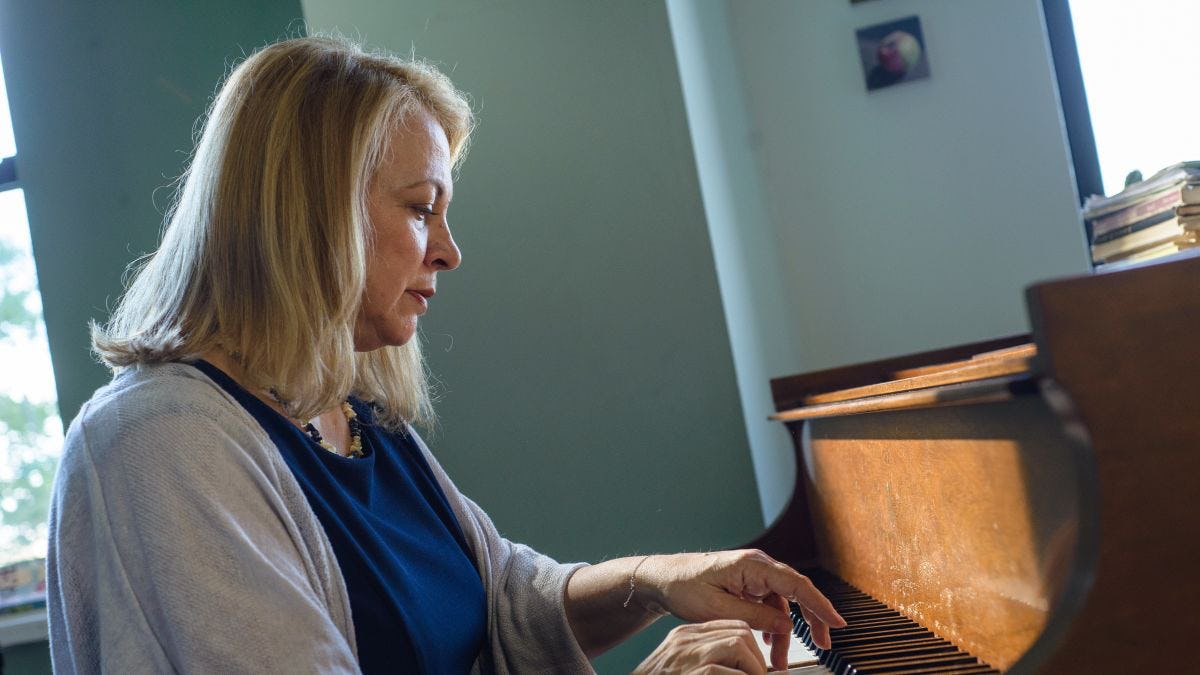 Aysegul Durakoglu, a Julliard-trained pianist who performs internationally and has recorded several albums, serves as a teaching associate professor with the College of Arts and Letters. Photos: Jeff Vock

Aysegul Durakoglu lives high above the Hudson, along the cliffs of Weehawken, New Jersey, windows overlooking the city and river and bringing in the morning light. She starts her days early at the piano with a lively choice, often Bach.

But when night begins to fall, she turns to an old favorite.

“When I watch the sun set and the light turning into night, that is the time for Debussy,” she says.

Durakoglu, a Juilliard-trained pianist and Stevens professor, is an expert in a variety of piano repertoire, from the earliest to contemporary styles, and has performed nationally and internationally works mostly from Bach, Chopin and Debussy; the Sephardic and Turkish music of her homeland of Turkey; and Argentinian and American musical traditions. She has traveled the world appearing in music festivals and concerts in the United States, Europe, Russia, Buenos Aires and Turkey and has graced some of the world’s great stages, including Carnegie Hall and Jazz at Lincoln Center. The Istanbul native has also recorded several albums and leads her own New York-based ensemble, Musica Mundana, of the Chamber Music Society.

She has played piano since age of five, and her hands, as they travel the keyboard of her baby grand Steinway, are not delicate. These are hard-working hands.

It is this depth of experience — and her enduring love of music — that she has brought to Stevens students since she joined the university in 2005, where she serves as a teaching associate professor in the College of Arts and Letters’ music and technology program. She has presented numerous lecture-recitals at Stevens and also performed at the Bell Labs Shannon Conference on the Future of the Information Age in 2016.

Her charge is to provide instruction in the basic traditional discipline of music, as she teaches keyboarding, music history and theory, and private piano lessons. She has watched, with delight, as the music and technology program has experienced remarkable growth in recent years, in enrollment and in the quality of student work.

As much as professional performance is a part of her, so is teaching, which brings much joy, she says, whether she is guiding students who will become professional in the music field — those with potential just waiting to be explored — or beginners, often Stevens engineers, who won’t become musicians but who are so attentive and open to a lifelong love affair with music.

“I was lucky to study with great teachers and mentors; that’s why I value teaching,” she says. “It’s such an intimate endeavor. One-on-one instruction for many years — it’s continuing a legacy, it’s continuing a tradition of classical music. I think it’s everyone’s responsibility to offer this to the younger generation.

“I feel lucky and privileged to pass it on to my students.” 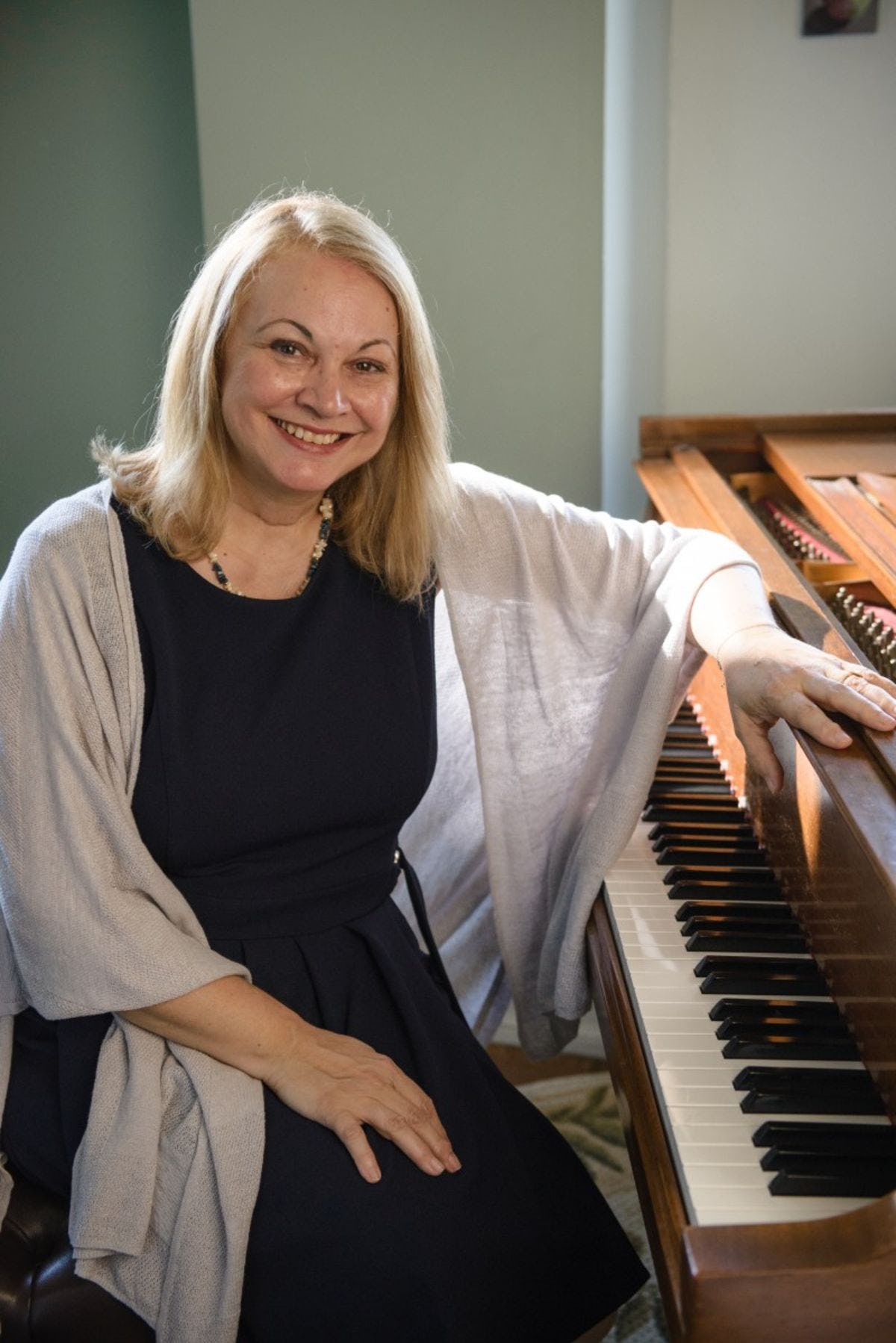 Gracious and soft-spoken when you meet her, Durakoglu is also busy. This past summer, she prepared to leave for an international piano conference in Novi Sad, Serbia, then on to Vienna, to play a recital for a European Union-sponsored group and the diplomatic circle.

But she generously takes time to recall her journey from Istanbul to Hoboken — and to play for her visitors.

In a review of her Merkin Concert Hall debut in New York back in 2006, The New York Times described her as having “nothing false or artificial in her compositions. Her musicality is naturally come by.” As she plays — first, a dreamy Chopin waltz, then a Debussy waltz full of emotion (“His music is still a mystery to me,” she says), her fingers are quick and sure on the piano. Her expression hints that she’s in another place and when she finishes, she feels “light.”

This joy and power of music — and the legacy of the great musicians and composers — are something that she hopes to pass on to her students.

Growing up in Istanbul, Durakoglu had exposure to great teachers and to French composers like Debussy early on; many of her teachers had studied in Paris. Attending French lyceum for secondary school, her dream became to travel abroad and study western classical music at one of the world’s great music schools — Juilliard.

After earning her master’s degree at Juilliard, she went on for a Ph.D. in piano performance from New York University, where she also taught before joining Stevens.

Finding friends through the local Turkish community, some of them Stevens faculty at the time, she was invited to poetry readings, lectures and concerts on the Stevens campus and was eventually hired as a guest lecturer. Durakoglu found a kindred spirit among the humanities faculty, who very much valued music, and she loved the community feel of Stevens, where she could get to know everyone from students to the president. And she liked Hoboken; its proximity to the water reminded her of her homeland.

Living in this area of the world has also given her access to New York, where 20 years ago she founded Musica Mundana, a chamber music group that has performed music of various cultural traditions in the New York metropolitan area. Her many musical achievements over the years have included playing Weill Recital Hall at Carnegie Hall. In addition to her performance and teaching career, Durakoglu serves with an NGO at the United Nations.

Durakoglu is eyeing future projects now, and in 2019 she plans to play several concerts with the Chamber Music Society, exploring world music as well as western classical. She wants to apply for a grant to help nurture young female composers and has been holding dinners at her home with fellow musicians and friends collecting promising works. She hopes to record again.

She cannot imagine her life without piano; she practices at least two hours a day, every day, and three to four hours a day before performances. And she is a believer in the transformative power of music.

Back in 2016, Durakoglu was playing a salon concert in Istanbul in a small venue when a terrorist bomb exploded a block away. She heard whispering, and some people left the theater, but she steeled herself to continue playing.

“Music has power,” she says. “When no one’s around, and everything seems wrong, there is always music to make it right. It’s an emotional and spiritual connection.”