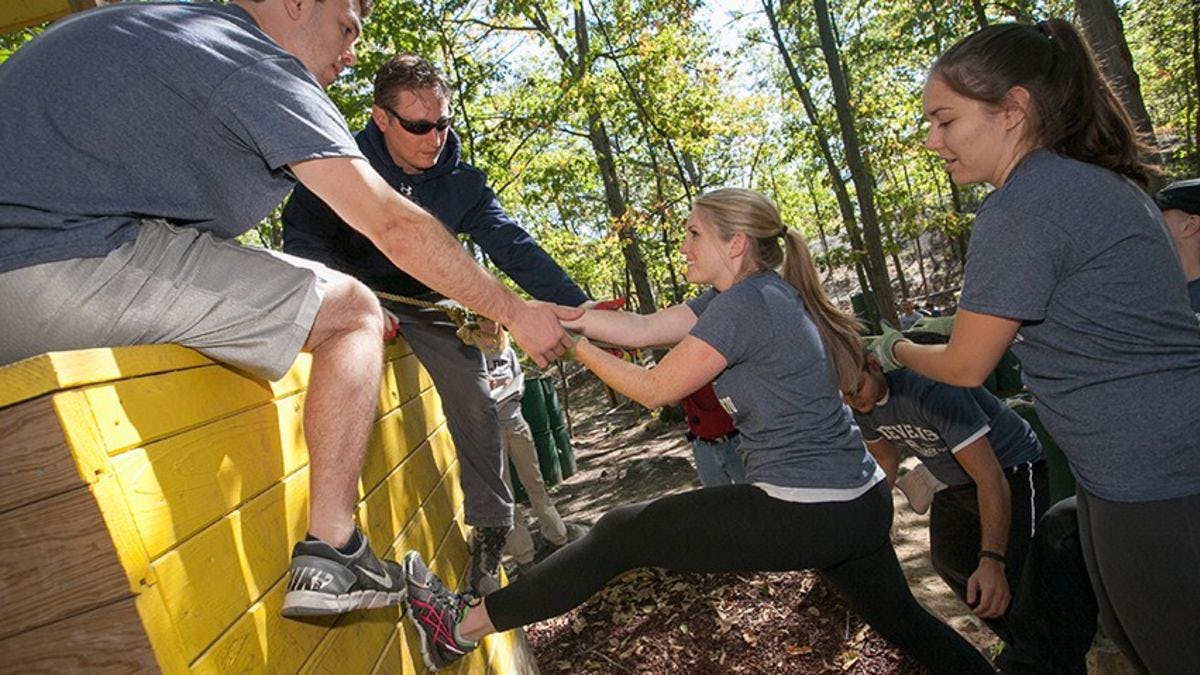 Executive MBA students work together to complete a 'mission' at West Point. The course reinforces the close ties students in the cohort form.

If you were navigating an enemy minefield and tasked with laying a bridge for your teammates to cross safely, you’d probably be more worried about safety and survival than following the rules.

Not so for Peter Flynt.

Flynt, a student in the School of Business' weekend executive master’s program, had just scaled a wall and was setting a board for his teammates to use as a bridge when the board touched an out-of-bounds area.

No mines exploded — the “minefield” was actually just section of off-limits ground on an obstacle course — but rather than cheat, Flynt immediately looked for his group’s observer/controller to determine what the penalty would be.

That idea — that ethics should be a central point of leadership — is part of why Flynt and 20 of his classmates were completing the leadership reaction course at the Thayer Leader Development Group at West Point, NY, at the Historic Thayer Hotel on the famed U.S. Military Academy.

It’s a value firmly ingrained in Flynt and one he sees emphasized in his Stevens training. 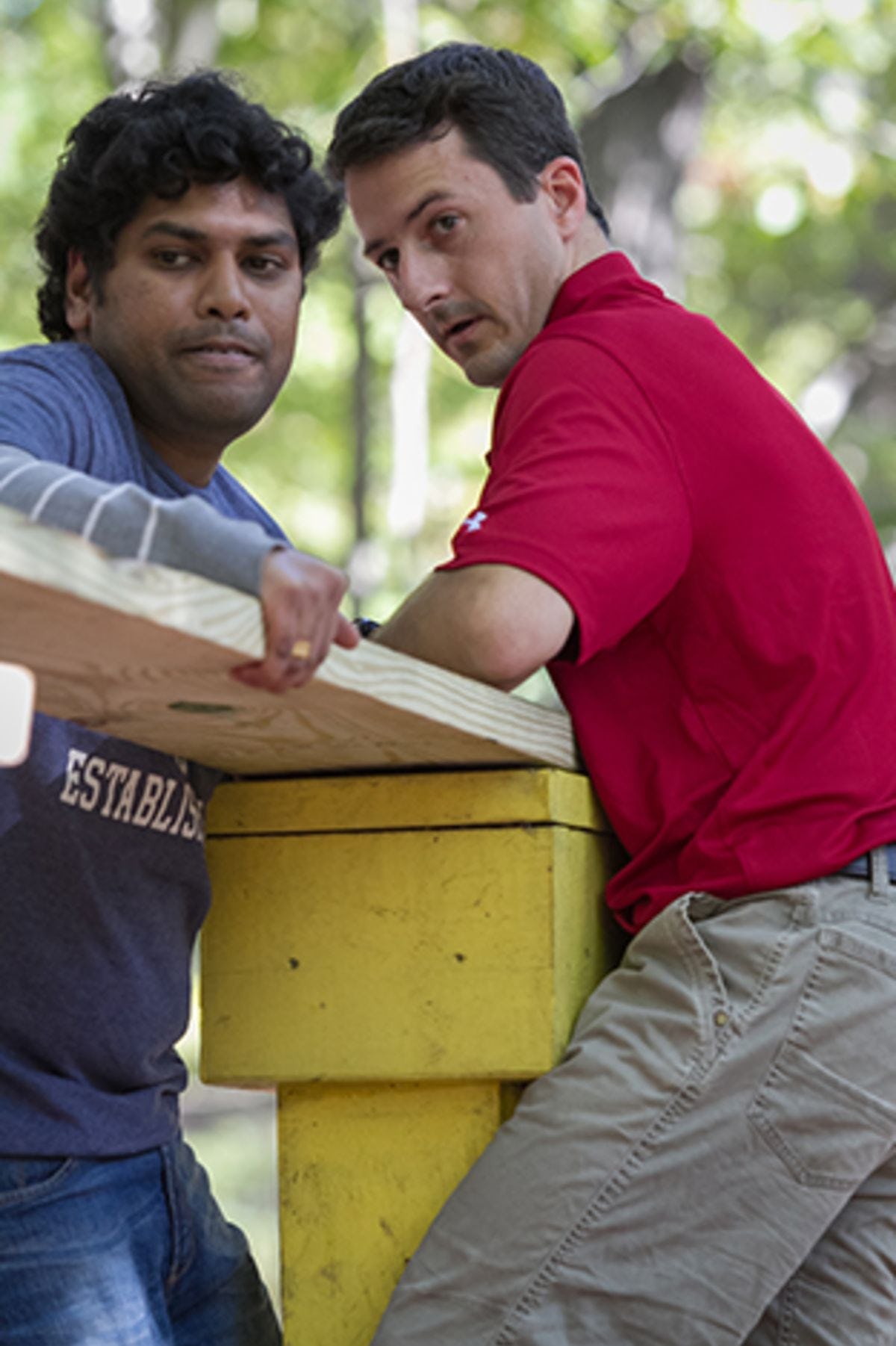 Peter Flynt, right, helps steady a plank so his teammates can cross a gap. 'Ethical leadership can be learned, it can be taught, but ultimately, it has to be practiced,' Flynt said.

“Ethical leadership can be learned, it can be taught, but ultimately, it has to be practiced,” said Flynt, an assistant vice president at New York City’s Economic Development Corp. “This leadership course is a great chance to show you really need to think of these things, because they do impact you in the long run.”

Learning by doing — and doing it right

That sort of attitude is exactly what professor Gary Lynn had in mind when he worked with TLDG  to offer the outdoor leadership seminar for Stevens graduate students.

“It’s not just about teamwork and leadership training,” Lynn said. “West Point emphasizes ethical leadership and teamwork, like Stevens with its own honor code. Everybody wants an ethical leader. In today’s age, it’s easy to take the shortcut for the quick buck. And we’re trying to train leaders that will take the longer way, but the surer way, from point A to point B.”

The ethical tradition at West Point is one the Thayer Leader Development Group is eager to highlight, said Todd Gile, its director of client relations and a retired lieutenant colonel in the Army. The training emphasized in the leadership reaction course is much like cadet training, he said.

“The idea is to give people as many opportunities to experience potential ethical situations, then have them discuss, review and think about it, so the first time they see it is not when they’re in an actual ethical situation,” Gile said.

Putting skills to the test

The weekend executive master’s program at Stevens is designed for experienced professionals who have been in the workforce for at least five years. Classes, which meet every other Saturday, focus on training in management of people and technology, to produce well-rounded leaders who understand how to leverage technology to improve processes and decision making, and maximize value, for their organizations.

In addition to a rigorous curriculum that’s developed with insight from industry partners, the program emphasizes leadership and teamwork skills, through events like the weekend at West Point, and exposure to international culture, through a study abroad trip to China.

The purpose of the West Point weekend, Lynn said, is to give students a chance to develop the camaraderie that’s a hallmark of Stevens’ executive master’s programs while also getting them to put their leadership skills to test. It certainly rings true when you watch students hoisting one another over walls or through tunnels as they complete mock scenarios where they must transport live ammunition to stranded combat units or organize an escape from a POW compound without talking.

And there’s an immediate practical component, said student Liza Banhalmi, who works in control systems at a power utility.

“If something breaks in the plant, if I’m busy, I have to send my technicians out there to check it out, and I have to trust in what they do,” Banhalmi said. “Same thing with the obstacles. There were points where there were blind spots, and I had to trust my teammates on what was on the other side. At my job, I have to trust the people that I work with who have more experience, and I have to be able to trust the knowledge they gather when they get to a problem first.”

A big part of the obstacle course is the five minutes for reflection built into each component. Each time, teammates discussed what worked, what didn’t work and how to use that information to go forward, along with assessing the leader’s performance. Those discussions were facilitated by the observer/controllers, or OCs, who pointed out some things teams may have missed in the heat of the moment.

Flynt’s infraction with the board occurred in his team’s second obstacle of the day. The group’s OC, Fran Wolf, didn’t penalize the group, since he “didn’t want to wreck the flow” of what was a good learning experience in action. 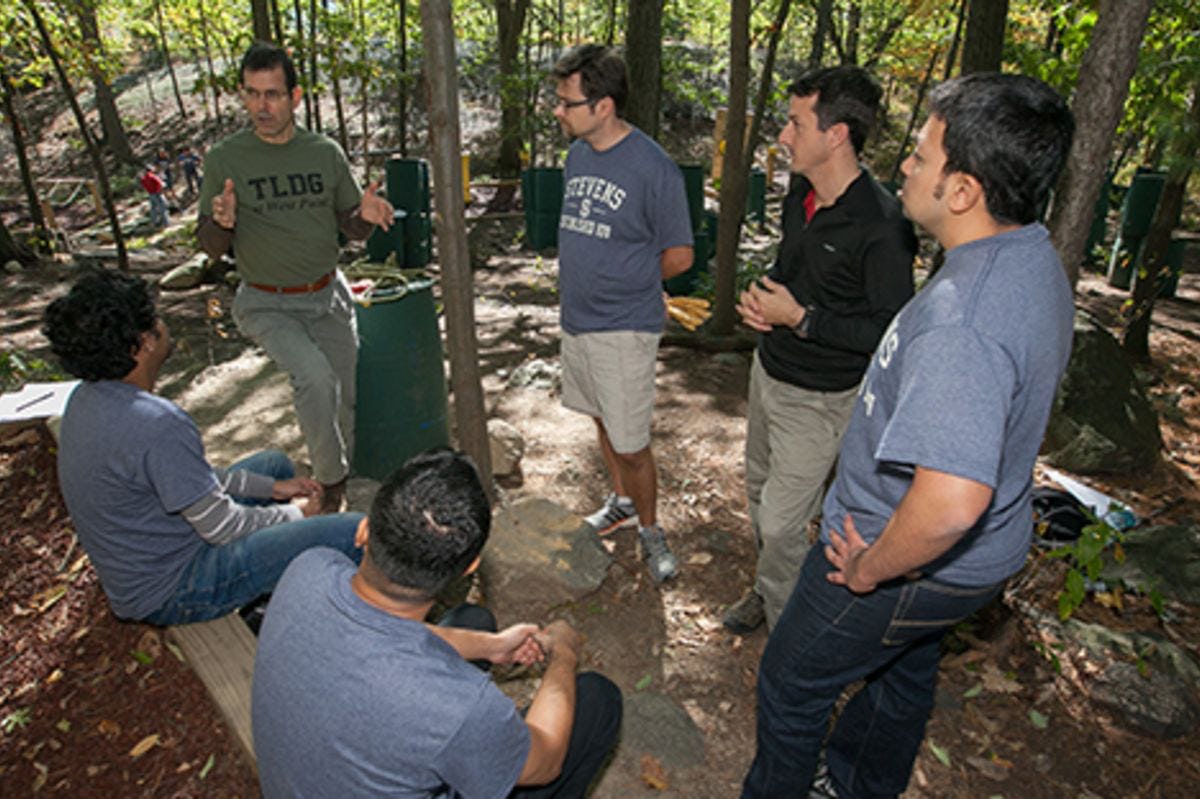 Fran Wolf, in green, of Thayer Leader Development Group, gives feedback to a Stevens team as they reflect on their performance and connect their work to their corporate responsibilities.

That emphasis on practical leadership, driven from trust and understanding, was especially notable by the time the day concluded. Flynt and his teammates needed only a couple of minutes to hatch a plan to complete a tricky course — involving careful suspension of long boards to cross aerial gaps — and finished with several minutes to spare.

“We just started trusting each other,” student Ray Baig said. “If someone is coming up with something out of the box, we weren’t debating that, we were just trusting him and going with that kind of solution.”

By the last course, student Martin Dziasek said, “everyone realizes where the team’s strengths are, and everyone as a group is saying, ‘Hey, you go there; you do that; you there,’ so we deploy assets in the best way.”

For Wolf, their OC, it was a good message to end the group’s discussion with.

“Be vocal, as you get back to your teams at school and work, about trying to bring in, trying to figure out what those skills are,” he said. “As a leader, you’ve got to bring those out of your teammates. If you fail to leverage those strengths your team will fail to perform as well as it could.”