Invested in a Purpose: Shalini Menon M.S. '20 Begins a Career in Corporate Banking 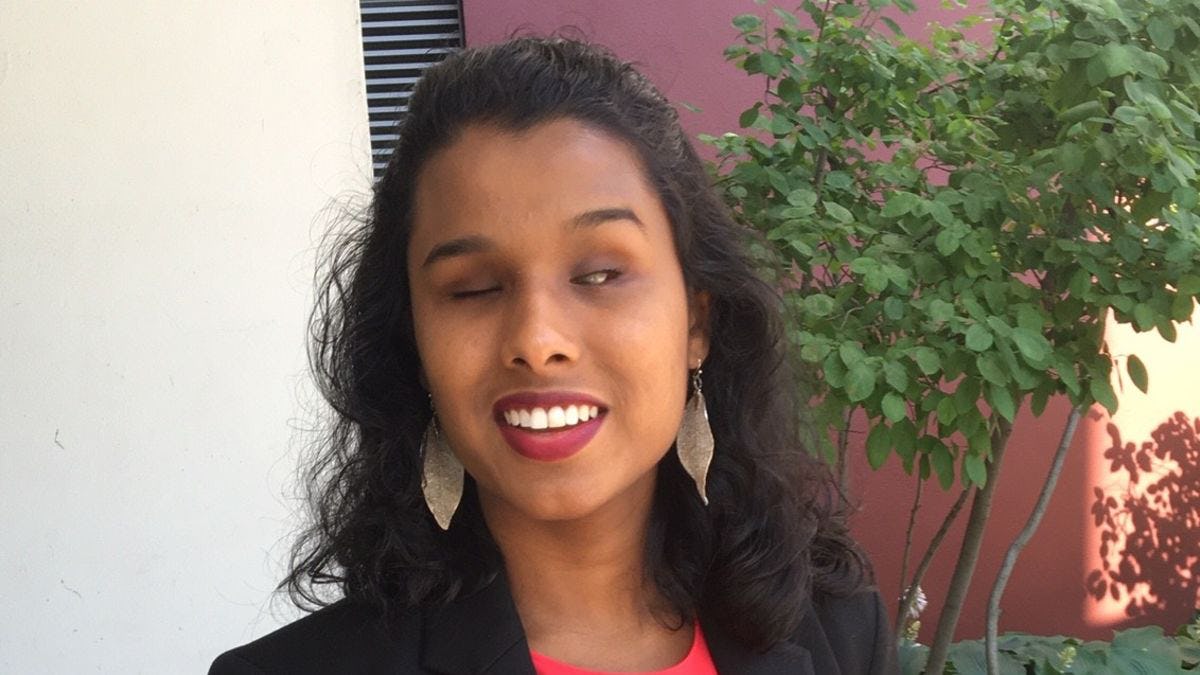 Blind since birth, Menon chose Stevens for its support for students with disabilities, flexibility and size. Now she will trailblaze in corporate banking as a mentor for women, international students and individuals with disabilities

When Shalini Menon, a prospective financial engineering student who is legally blind, was seeking to embark upon a master's degree in 2018, she ultimately chose Stevens.

"There was just something special here," says Menon. "There was total support for disabled students; a small size, which I wanted; and the willingness to be accommodating and flexible. They always asked, 'what can we do to help you learn financial engineering?' rather than asking me to fit into existing programs that were less scientific than I wanted."

Two years later, she departs Stevens with a 4.0 GPA, a Beta Gamma Sigma honors society membership and a hard-earned master's degree in hand.

She will move on to her next great challenge: a new career as a corporate banking analyst, at the U.S. headquarters of BMO Capital Markets (formerly Bank of Montreal) in Chicago.

"I have never regretted my decision to come to Stevens," she says. "The focus from day one was that Stevens would make the learning experience as fruitful as possible for me — that they would do whatever it took to make this happen. And they have done that."

Growing up in India completely blind from birth, adopted by a family at the age of 3 months, Menon says she never felt she was less capable than others — and never cursed her luck or her disability.

She simply worked hard to learn the same subjects and skills as her classmates. A positive attitude and an incredibly supportive family helped, too.

"There aren't nearly as many resources for people with disabilities in India as in the U.S." she says frankly. "My mom, in particular, had to play a very active role in my education and she did. My family made sure that I attended a regular middle school and regular high school, rather than a specialized school for the blind."

In order to learn math and science, which she especially enjoyed, she and her mother made an extra effort: they would build models together at night.

Her family also enrolled her in salsa, swimming, voice, piano and recorder lessons. Menon would often attend school all day, two to three lessons after school, and then do homework and crafting into the night.

The result of all that hard work: straight A's in high school, and a perfect 800 score on her SAT.

Menon always knew she would attend college in America.

"I wanted to go to a liberal arts school, to learn a wider variety of subjects," she explains.

After receiving a full scholarship to Amherst College in Massachusetts, Menon completed a bachelor's degree in mathematics while also minoring in economics and studying opera, jazz and music theory as well.

She then accepted a year-long research assistantship in a computing lab at the University of Colorado, during which she led AI, voice assistance, quantitative analysis and 3D printing projects.

"My work in Colorado was focused on the goal of enhancing STEM experiences for the blind," notes Menon. "This is very important to me personally."

It was also there that she began to become interested in financial engineering, as she began working with increasingly sophisticated machine learning and deep learning models.

"There really wasn't anyone blind I knew of anywhere who had majored in FE," she points out. "I wanted to break the boundary or the barrier."

"It was a difficult decision," recalls Menon. I had already been in a small-college environment at Amherst and I enjoyed it, so Stevens was definitely one of the strong contenders right away. I felt that I could grow and have close interactions at Stevens, that I could get to know the faculty and other people in the school really well."

Stevens also separated itself in other ways during the application process.

"There was some skepticism, even at the biggest schools, about whether I could do analytic coursework in the classroom — and whether it would be possible to get the financial modeling technology to work for someone who’s blind," she says.

"Some schools even advised me to switch my application to a different, less technical track or school, such as management."

Stevens, she says, responded most positively of all the graduate schools she contacted, including storied institutions such as MIT and Columbia.

"Stevens saw my research and credentials, accepted me, offered me a Provost's Scholarship and told me 'whatever you need to do, we will do it,' " Menon remembers. "This made my final decision much easier."

Once accepted, the university's Office of Disability Services — which currently serves more than 200 students, including those with mobility challenges, sight and hearing challenges, and social and learning challenges — stepped into the picture and began facilitating Menon's entry and education at Stevens.

"The approach of the ODS and its director, Phil Gehman, were incredible from the get-go," she says. "They constantly asked me: 'how can we help you learn?' It was very reassuring."

Among other accommodations, the office arranged for Menon to arrive on campus early and meet her future professors in advance of classes.

"Everyone on the faculty was incredibly open to my needs," she says, "asking 'how we can make this work? If I asked to arrange to meet once a week in an extra individual session, the professor would say 'of course.' They were always prepared and willing to make time for me.

"I don't know if master's-level professors typically have this sort of dedication, but at Stevens they definitely do. It was an incredible experience, learning here. And I was also able to hone additional skills to make myself employable such as coding or presentation."

"Our office is fortunate to have excellent relationships with the Stevens faculty," agrees Gehman. "They have demonstrated time and again their willingness to be very accommodating to students with disabilities, and have been considerate and respectful with regard to the needs of students."

To further optimize her classroom learning experiences and work through issues of access, the university's disabilities services office made dedicated course assistants available 20 hours each week, assisting with tasks such as reading smartboard images and graph diagrams.

"Sophisticated analysis technologies are not typically accessible with a screen reader," she explains. "The course assistants and I worked together to become more familiar with how the whole process worked, a lot of back and forth trying different things, to make it work.

"Nothing really stopped us. Anything that wasn’t accessible, we just found a way to make it accessible. Since technology is always changing, you have to be agile. This is working now; something new might work better tomorrow."

While at Stevens, Menon also loaded up on computer science training, including coursework in machine learning, data structure and algorithms. Her master's capstone research project involved using AI to analyze macroeconomic indicators for their impact on stock markets.

"Shalini is truly one of the best students I have had — in a class that is project-intensive, with challenging questions," notes financial engineering professor Khaldoun Khashanah, who taught Menon and supervised her team's capstone project. "The topic she focused on was timely and complex.

"Her team's project outcome was one of the best, and she was excellent at communicating and presenting her results in front of the students."

"I was able to leverage math, economics, coding and computer science all in this one project," she adds. "I acquired flexibility while at Stevens, and a whole group of new skillsets."

Menon first became acquainted with her new employer, BMO Capital Markets, while applying for and receiving a company-sponsored scholarship in 2018. She then became reacquainted with it while visiting a Stevens career fair.

"I got a lot of support from Stevens while searching for an internship and a career," she recalls. "Phil Gehman, the ODS director, personally organized my visits to the career fairs, made sure they happened and helped me get to the various stations and meet with recruiters."

Menon would eventually spend the summer of 2019 as an intern in the firm's Times Square offices. She initially worked as a technology analyst, but as she became more familiar with BMO's banking operations it became clear to hear that she wanted to work in that field.

In mid-June Menon moved from Hoboken to Chicago, ready to begin the next chapter of her life, completing an apartment search virtually and traveling west with her mother — who happened to be visiting from India when the COVID-19 pandemic temporarily halted international travel.

"BMO has been great," she enthuses. "I have a really good feeling about this job. They are continually asking me, 'what kind of technology do you need, how can we make it better?' It has been a really good process working with them, discovering what are the accommodations I will need.

"I am excited to start learn more about the banking industry — and also to share my story, in the hope that blind women, international students and others can also have this opportunity to go where they want to go in life."

She will also continue to work as an advocate for the individuals with disabilities, both personally and professionally.

"I have always wanted to work to make technology more accessible to people with disabilities," concludes Menon. "I know all the challenges. I know how platforms such as websites are still not entirely accessible, because it is a challenge I still deal with daily.

"I always wanted to be involved in tech, whether it was on the design side or now in the finance industry, where I will continue working to support companies and ways we can all make tech more accessible to all of us."