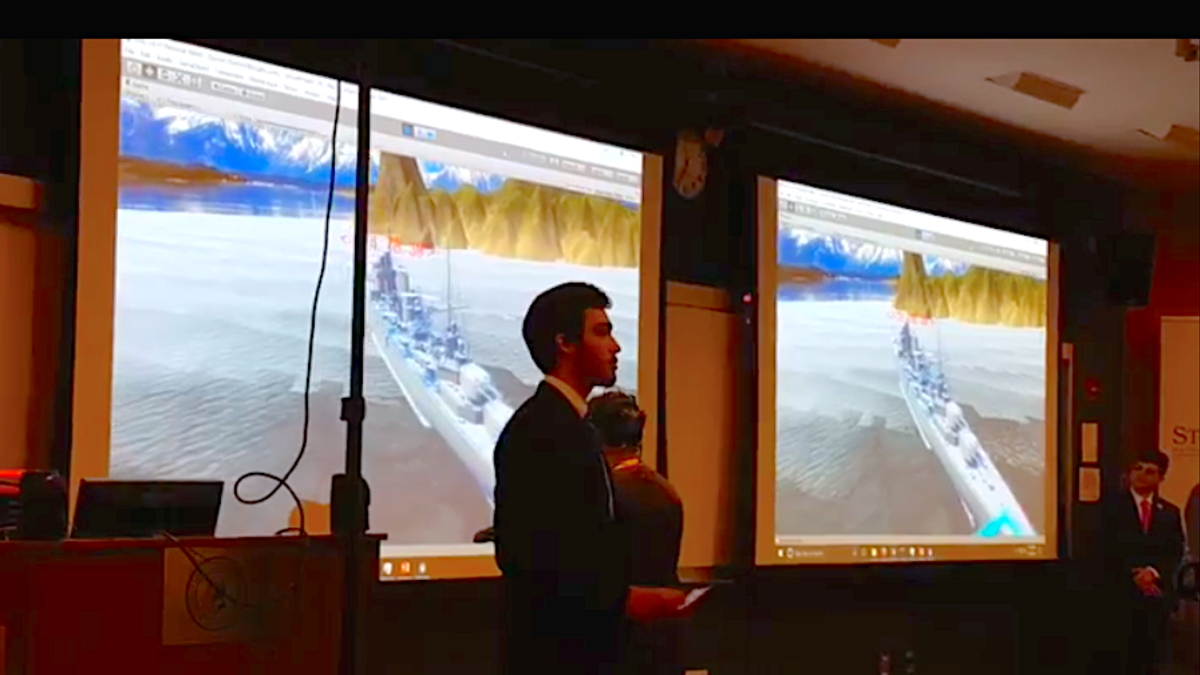 On Thursday, July 27, 22 students presented their final projects from the Stevens Institute of Technology’s Summer Research Institute. Working with the Maritime Security Center, undergraduate and graduate student participants spent one week learning everything they could about maritime security systems and seven weeks building and testing projects that might ultimately benefit the Department of Homeland Security.

“A majority of the students, roughly 90 percent, came into the program with no prior knowledge of the maritime domain,” says Beth Austin-DeFares, director of education for the Maritime Security Center. “What they accomplished in eight weeks is extraordinary. Especially since they really accomplished it in seven.”

The first of those projects was “Maritime Cybersecurity—Data Flows in the Maritime Transportation System.” Including Stevens cybersecurity students Dylan Iuzzolino and Catherine Javadian, this team’s project was to “investigate what data is exchanged between respective maritime and port entities,” according to their abstract. Under the guidance of Stevens faculty members Susanne Wetzel and Thomas Lechler, the team used online maps of the current Maritime Transportation System to better understand how data moves when a piece of cargo is shipped from a warehouse to fulfill an online order placed by a customer.

That data involves people all over the world, and that cargo is largely online purchases. “We worked from [publicly available diagrams], but it didn't say which data was exchanged between entities,” the team explained. The industry is full of proprietary data so this was an expected challenge. Still, the team was still able to document six steps in the export process and find 102 data types exchanged between 19 different parties, including customer names, addresses and phone numbers. The team mixed all that information together into a data flow diagram, data flow matrix and tech infrastructure matrix. They recommend conducting further data analysis on which entities hold most critical information and how to best document them for future research. “This project isn’t about about analyzing technical risks,” they explained during the presentation. “It’s a foundation for more detailed data analysis in the future.” 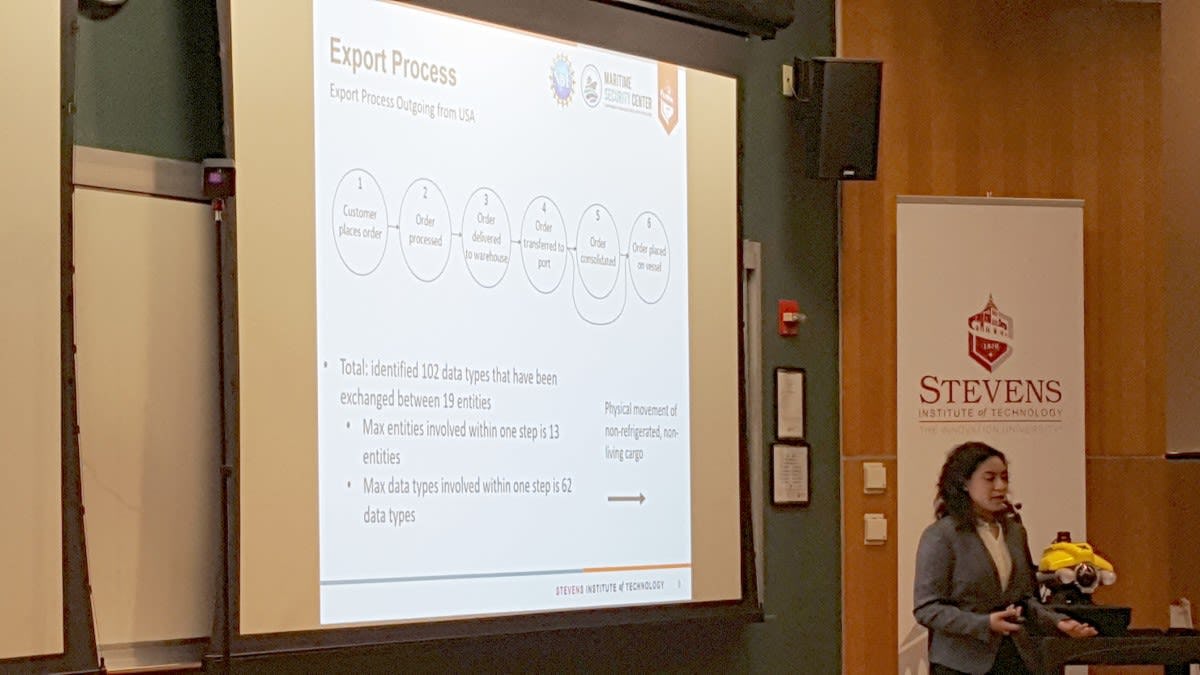 There is a compelling need for safe and reliable robot autonomy in maritime environments, especially when robots must operate in close proximity to complex submerged structures, such as piers, bridges, ships, and offshore platforms. In these cases, comprehensive situational awareness is needed to inspect these structures and avoid collision. With that goal in mind, this project will involve a team-based effort to develop and test active perception capabilities for a VideoRay inspection-class remotely operated vehicle (ROV), which will deploy from a Wave Adaptive Modular Vessel (WAM-V), a class of unmanned surface vehicle (USV).

Working under NSF CAREER Award-winning assistant professor Brendan Englot, the team focused on combining existing maritime robotic technologies in a way that’s never been done before to increase accuracy and safety. In order to do that, the team split the project three ways: optimizing the USV, designing the ROV system, and building the ROV software. The USV team studied and identified the best equipment, tested weight and sensor placement for heading, pitch, roll and water temperature and also optimized power consumption for a maximum of 15 hours. The ROV system team designed a permanent, circular cage mount for a doppler velocity log (DVL) and VideoRay that allowed both to operate safely and autonomously on the WAM-V. “The more moving parts a system has, the more difficult it is for the system to operate,” the team explained. The ROV software team had to learn several coding languages in order to double the amount of acceptable drift with the DVL and debug source files for Hudson River test data.

In the end, the team created a system that could refine the way the Department of Homeland Security uses existing technology to monitor waterways.

The system will definitely change the way Stevens Robust Field Autonomy Lab conducts its research. “These students did a tremendous amount of work,” said Englot, “and it’s all going to be used in our research. They built a mount we’re going to use. They built software we’re going to continue using. They even helped me submit an instrumentation grant to the Department of Defense that will hopefully pay for all the sensors on the WAM-V.”

“They took lots of initiative,” added Austin-DeFares, “from contacting the [DVL] company directly to learning lots of new coding languages to troubleshooting tough experiments to get good data. It’s very impressive, especially for a team that’s mostly made up of freshman.”

The next project was, “Arctic Acoustics—Detecting and Localizing Changes in Ice Cover.” The arctic region hasn’t been frozen year-round for the last ten years, so it’s now being considered for shipping. In order to do that safely, shipping companies need to know how to predict and avoid ice floes. The team, including Stevens mechanical engineering student Trevor Hinds, chemical engineering student James Lyon and electrical engineering student Stephen Opet, decided to figure out how to do just that. 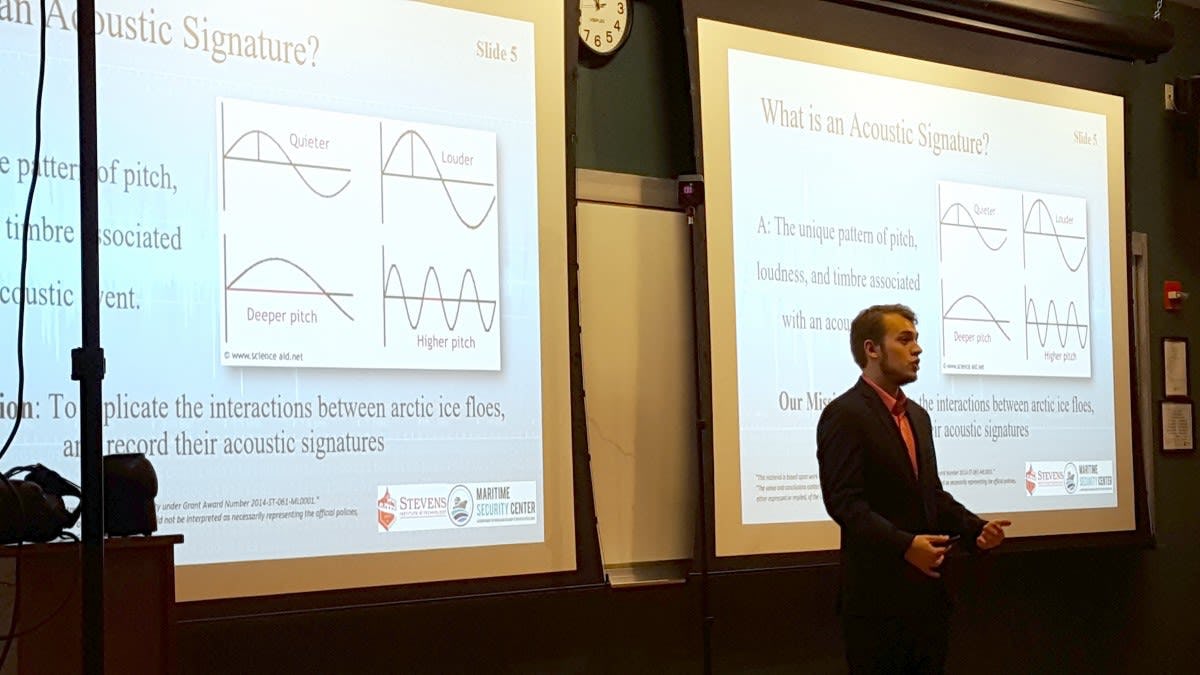 Under the guidance of Stevens faculty members Barry Bunin, Marehalli Prasad and Chenhui Zhao, the team focused on detecting distinct acoustic signatures for three different kinds of ice breaks: thermal cracking, ice fracturing and ice shear deformations. Testing Arctic conditions in Hoboken, New Jersey is difficult, so the team froze large blocks of ice in the MSC and Stevens Dining Hall freezers every day. Taking advantage of the anechoic chamber in the Noise and Vibration Control Lab, the team performed 125 tests on those ice blocks to determine sound frequency, amplitude and timbre.

They found that not only did each type of crack have a unique sonic fingerprint, but those fingerprints could be mapped to created statistics that could predict upcoming cracks. By overlaying frequencies from each type of crack, the team found thermal, fracturing and shearing cracks occurred between 1600-2200 Hz, 3000-3750 Hz and 4575-50000 Hz. Smaller cracks occurred between 1200-2000 Hz. The team tested those results against National Oceanic and Atmospheric Administration data. The results matched.

The team was so encouraged that they submitted an abstract, and hope to publish a paper.

“That’s a significant achievement for a team to come together from different schools on a new project like this and accomplish the submission of abstract,” said Austin-DeFares.

“These students did really good job,” said Zhao. “They performed 125 experiments in only four weeks. They submitted an abstract in only seven weeks. They’re very good students. Very smart.”

Working under Stevens advisor Blaise Linn, the team learned that ship inspectors for the Climate Variability and Predictability Program currently use cameras like the VideoRay to inspect ships, but due to the volume and size of these cargo ships they can’t see everything. CVP inspectors need new ways of visualizing sensor information to more quickly and easily locate anomalies or parasitic devices used to smuggle drugs and potentially, terrorist bombs or weapons, on the ship.

Reviewing 89 articles, the team discovered that they could do this by converting 2D sonar to a 3D map. After that, it was a matter of coding and testing to create a virtual reality command center. Using Unity, the team built a platform for sensor integration using real-time automatic tracking system feeds. They even incorporated live data from the Maritime Systems Center antenna, which tracks all ships in the water in the local area, which they showed in their demo: 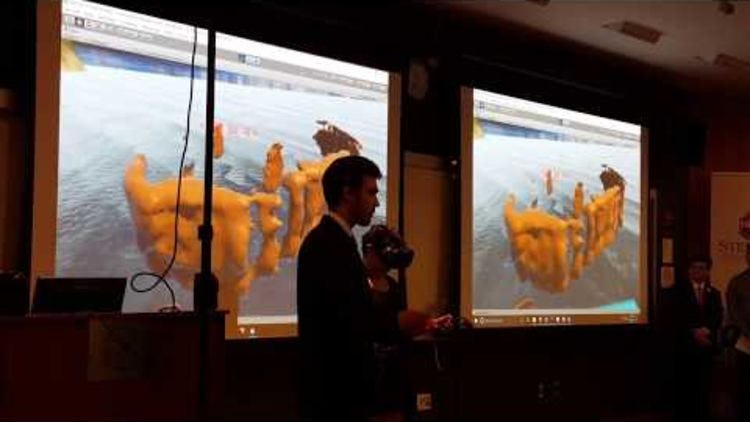 Impressive as this is, it’s only the team’s first step. They envision the technology to scale up to allow multiple users to scan a larger ship. The team would also like to overlay real-time radar, electro-optic and infrared camera data feeds to the environment as well, and even include automated feature recognition.

This idea could genuinely change the way ship inspections are done in the future. The upfront cost for the system would be a little pricey at around $85,000 for the virtual reality headset, ROV and software, but it would save CVP in the long run by decreasing manpower, increasing efficiency over longer distances, and putting the equipment in less danger because it’s farther away from the ship’s engines. Plus, the Coast Guard already has a 3D sonar that’s higher resolution than what the team worked off of, so they’d be able to easily build a similar 3D map.

“This is the emerging area, what these students have tapped into,” said Austin-DeFares. “This is the future.”

As inspiring as those projects were, their biggest impact was how they inspired the students creating them. “96% of survey respondents to this program say their experience has caused them to consider careers or advanced academic study in maritime study,” said Austin-DeFares. “Imagine what innovations they’ll go on to create.”