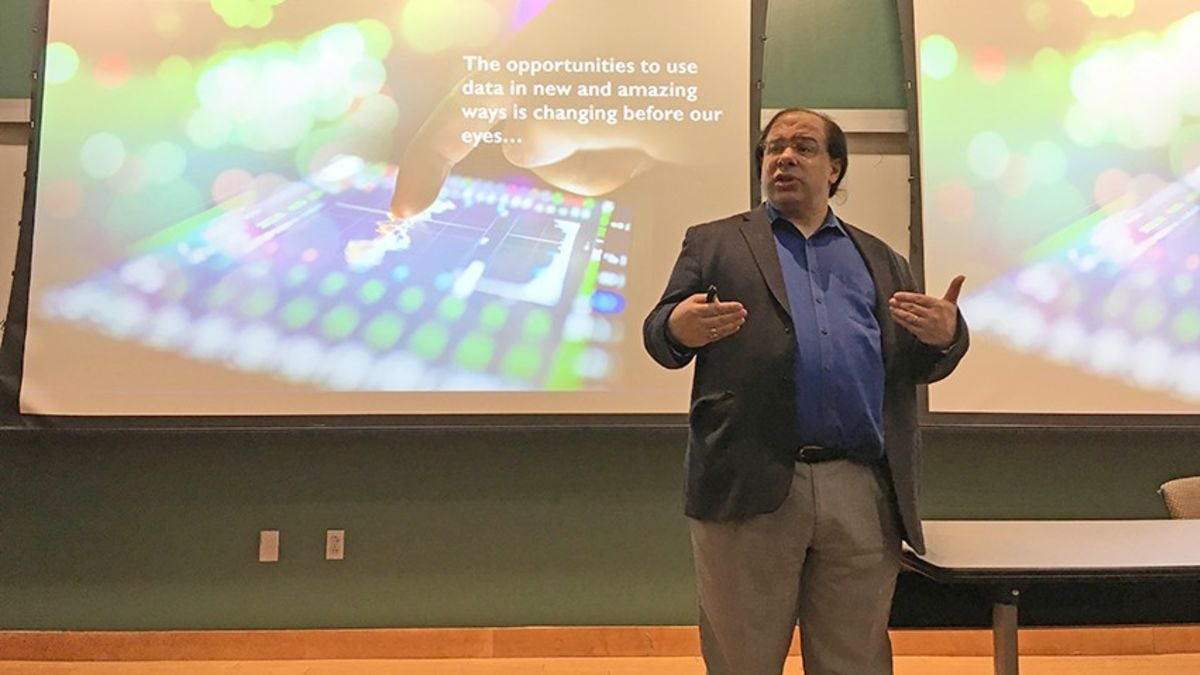 Dr. Anthony Scriffignano cautioned students to think critically about technology in business, and avoid dangerous shortcuts. 'You're data scientists,' he said. 'You're supposed to think.'

When he asked members of his audience to clap their hands three times, Dr. Anthony J. Scriffignano was making a point about patterns.

All three claps sounded synchronized, despite the fact that he’d given no particular instructions that the crowd of students at Stevens Institute of Technology try to clap in unison. Further, he said, if you played back a recording of the event, the clapping wouldn’t look as synchronous as it sounded live.

“That’s your brain trying to organize what’s happening,” said Dr. Scriffignano, senior vice president and chief data scientist of Dun & Bradstreet. “We think we understand that neural network in our heads, but we don’t.”

It was a good primer for Dr. Scriffignano’s talk, which focused on the changing face of analytics in business. Emerging technologies are putting new tools in the hands of businesses and government, which race to try to deploy them for competitive advantage. In doing so, however, they make assumptions and take shortcuts that pose serious threats — and critical thinking often is left behind.

“Computers are making more and more decisions for us,” he said. Especially in the wake of the revelations surrounding Cambridge Analytica and Facebook user data, “maybe we should think about that, think about the impact. Why would we assume all this technology is being used for good?”

Scriffignano focused his talk on corporate decision-making and the ways businesses address problems. He outlined several common scenarios, from “Red Queen,” where companies keep spending money just to remain in place, to “Black Cats,” where you’re not sure what data you’re looking for — or whether it is actually exists — to burning platforms, “where some Sword of Damocles is about to fall and you have to hurry up and do crappy work, so your boss can blame you for it,” he said.

In such scenarios, “Bring calm; don’t yell and scream, it just amplifies the noise. You’re data scientists, you’re supposed to think,” he said, offering insights on challenging respectfully and thinking critically about data.

The future is not going to be 'Star Trek' ... It's going to be more like 'The Jetsons,' where everything is automated but it doesn't work right.
Dr. Anthony Scriffignano, senior vice president and chief data scientist, dun & bradstreet

Dr. Scriffignano, who sits on the advisory board for the Stevens master’s in Business Intelligence & Analytics, is a world-renown data scientist with more than 35 years’ experience across multiple industry categories. So he knows what he’s talking about when he says high-tech tools can be helpful, but can also just “accelerate the speed with which we hit the wall.” While his presentation focused on solving business problems through data, he also spoke briefly about technology problems and how they are being addressed through data, also.

Students asked a number of insightful questions about whether bias in artificial intelligence could limit socioeconomic status, or whether intelligent machines will take over the world. He said “killing ourselves with machines” remains a possibility — an algorithm designed to automatically counter a missile strike, he said, relies on technology “that can’t tell the difference between a chihuahua and a blueberry muffin.”

The Heath Lecture Series is named for Stevens alumnus A. Roy Heath, who believed virtues like honesty, loyalty and teamwork are as essential as technical prowess when managing technical enterprises. Speakers in this series exemplify the leadership traits Heath considered crucial for success.