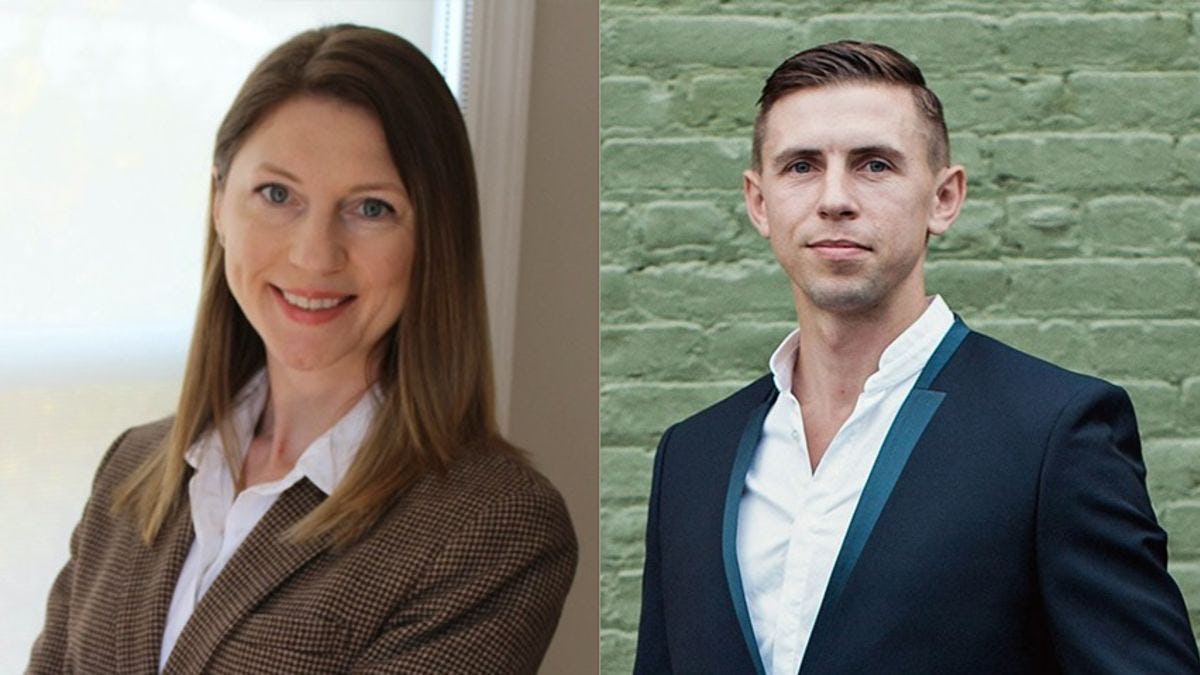 Natalia Malantchouk Sawka ’08 M.Eng. ’08 and Roman Malantchouk ’10 M.Eng. ’11 have founded Friends of Chervonohrad, a grassroots effort to raise funds and send supplies to Chervonohrad, Ukraine, and other communities in the war-torn country.

This conversation originally appeared as “A Final Thought” in the Spring/Summer 2022 issue of The Stevens Indicator alumni magazine.

It’s midnight in Chervonohrad, Ukraine — 5 p.m. in New Jersey — as Natalia Malantchouk Sawka ’08 M.Eng. ’08 and her brother Roman Malantchouk ’10 M.Eng. ’11 take a moment on this mid-April day to pause and reflect.

Chervonohrad — their home until they moved to the U.S. in 1999 and where they spent every summer surrounded by generations of family — is never far from their thoughts. Their aunts, uncles, cousins, friends and their revered 91-year-old paternal grandfather — who fought with the Ukrainian resistance during and after World War II and spent almost a decade in a Soviet prison camp — all live in this city of 65,000 that feels like a small town, 30 miles east of the Polish border. Moments of reflection are rare because, just two days after Russia invaded Ukraine on February 24, 2022, this sister and brother team — with busy careers and young children in tow — sprang into action. They haven’t stopped since.

They founded Friends of Chervonohrad, a grassroots effort to raise funds and send much-needed supplies to people in their hometown and other communities. It’s an international family effort, with a network of relatives and friends from New Jersey to Poland and on the ground in Ukraine working together to get supplies directly to people in need, many of them refugees fleeing from other areas of the country devastated by the war. As of late June 2022, they had raised $140,000 and received large corporate donations of clothing, enabling them to help more than 10,000 people with vital supplies, including food and medical supplies; connection devices such as solar power chargers; and children’s educational needs. They have also provided transportation to more than 3,000 people, who travel to the Polish border to pick up vital supplies from Poland and drive them to embattled eastern Ukraine.

Malantchouk Sawka, of Livingston, New Jersey, and Malantchouk, of Hoboken, spoke with The StevensIndicator alumni magazine via Zoom this past April about their mission. Their conversation, edited for length and clarity, follows. At times, their pain is palpable, as is their determination.

Stevens Indicator: How are you and your family doing?

Natalia: There’s certainly a lot of pain … Being a distance far away, you tend to feel a bit helpless. Your heart aches for your family, for your country, for all the people, and then you realize that you just need to do something to help them. So, what our family in the U.S. has done, we’ve united, and everyone has applied their best skills on what they can do, whether they’re fundraising, helping to set up the supply chain, talking to the community on the ground.

SI: How are your relatives and friends in Chervonohrad? What is life like for them?

Natalia: We speak to them every day. They’re, of course, scared. When the air raid sirens come on, they have to shelter in place. They’re very strong, resilient. They’re trying to keep up some sort of normalcy. They still have kids to take care of, who have to attend school remotely. They’re really coping with it the best way they can.

Roman: The thing with Ukrainians is that this [the experience of war] is something we all heard from our grandparents, and no one ever thought that they would be reliving this. While it’s very scary, for a lot of people, it mirrors what our grandparents went through.

SI: You started this effort to help your hometown. What motivated you, and how are things going?

Natalia: One of the reasons for starting this effort was to engage our parents in helping as well, to give them some structure to funnel their energy. They spend their days talking to friends and family on the ground, asking what they need. They’re executing a good portion of the supply chain, to make sure things get to the right place, to the right person. My dad has been purchasing lots of medical supplies, and my mom has been going around to small businesses, fundraising. It really gives them a way to take that feeling of helplessness and stress and convert it into something productive.

Roman: I think Natalia and I weren’t sure what to do, but we knew the first thing, something we could do right away, was raise money. We texted a message to dozens and dozens, probably hundreds, of our close friends, colleagues, business clients, neighbors. (Roman owns an architectural design firm; Natalia is a program manager with Infineum, a specialty chemicals company.) It was me, Natalia, our cousin and our significant others. Within a day we raised $20,000- $25,000. Then Natalia and her husband started figuring out logistics, along with my parents, back in Ukraine and Poland. I felt like, for all of us immigrant kids who came here — and whatever we learned in college and in our professions — that this is a moment when we just use our strengths. We created websites, social media accounts, graphics; we’ve reached out to all of our contacts to have online publications spread the word to have people donate; we organized flag raisings and rallies in our local communities.

SI: What are the greatest needs now, and how does the organization work?

Natalia: There had to be a realistic scope. So, all of us from Chervonohrad, we decided to focus on funneling the help there. That close-knit community has become instrumental to receiving the aid and distributing it on the ground. I want to know that the person who really needs the help is actually getting the help. And that's what we have been able to do with our friends and family on the ground. They’re going around town, they’re scoping the community, they know where the refugees live, they know what they need.

Roman: We’ve been continuously providing food to three daycare centers that are housing 150 refugees, and we just added this spring a fourth daycare with another 80 people. These are also places where we’ve been providing clothing and basic medical needs. We’ve purchased more than 600 first aid kits, tourniquets, Israeli bandages and bleeding control medication. We’ve also provided direct financial support to 35 people whose housing has been destroyed by the war and who have serious medical conditions, including children who have been separated from their parents.

Natalia: A lot of the refugees are mothers and children, and schools are only offered remotely due to frequent air raid sirens. So, we’ve been purchasing tablets to give to these children, so they are able to attend school. For these people who have lost everything, I hope it helps them just a little, to regain some sort of stability.

SI: Roman has said that this will be a lifelong mission. Can you discuss that?

Natalia: We’ll be following the needs, whichever way they develop. We will follow them whether it’s humanitarian aid in the area of medicine or in the area of education. Roman has mentioned scholarships and youth programs. Something we realized is that Ukraine has never had the concept of scholarships. It’s very empowering. How great would it be to bring that concept back in some way to the youth of Ukraine? So, we’re exploring becoming a nonprofit, 501 (c)(3) organization with a long-term vision of giving back to the children of Ukraine and their families who have been impacted by the war.

SI: Along with your grandfather’s imprisonment, your grandmother also suffered during World War II, fleeing Ukraine at age 7 and escaping to Moldova — on foot. How are you inspired by them today?

Roman: Our grandparents had to act; they had to do something. And they worked hard. They got through everything, built a life for our parents, for us. I can feel sad and heartbroken, but our grandparents didn’t give up. They acted. And I remember Natalia and I called each other and said, “We have to do something.’’ What our grandparents’ generation went through, it’s very fresh in our heads. That’s why you see everyone standing up, and people are not wishy-washy or trying to run away from the country. People are extremely patriotic and resilient because of the history that Ukrainians have had.