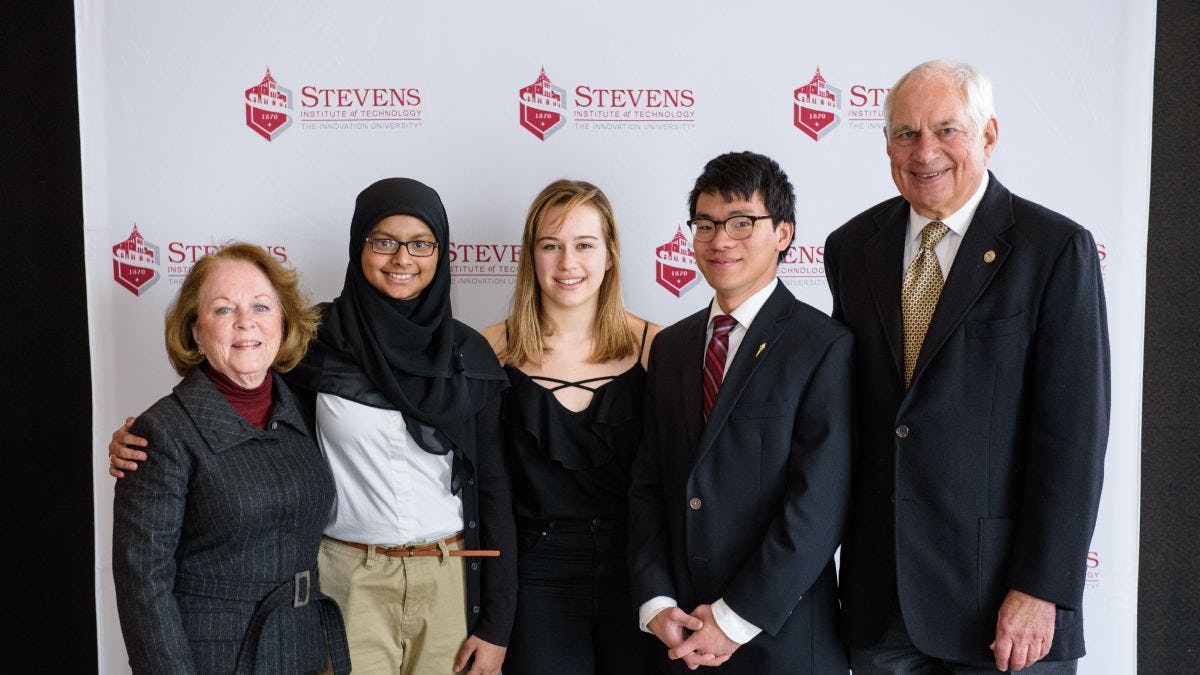 Every scholarship has a story, as the attendees of the annual Family and Individual Scholarship Luncheon learned on March 3.

Over 50 people attended the luncheon in the Bissinger Room, including scholarship students and the alumni and friends who support them. The luncheon is an ideal time for supporters to see the impact of their giving, and for students to thank their supporters and gain more exposure to the thriving culture of philanthropy at Stevens.

Vicky Velasco ’04, who is the current president of the Stevens Alumni Association, served as emcee for the event, and she outlined the make-or-break nature of scholarships.

“Scholarships change lives, because they enable more students to attend Stevens and experience everything we offer – challenging classes, enriching activities, and effective career preparation,” Velasco said. “Without scholarships, many of the students enrolled today would have had to decline doing so, because of what it costs to provide such a transformational education.”

Another scholarship was established by Mary Anne Cannon ’86, who gave the luncheon’s keynote address. Cannon, an executive in the aerospace industry, established her fund with her husband, Dan, in honor of her mother, Teresa, and her father, Thomas, who earned a graduate degree from Stevens. Cannon set the stage by explaining that when she was growing up in the 1970s along the Jersey Shore, it was almost unheard of for women to study engineering.

“My father and mother were both extremely encouraging to me, to go to Stevens and get an engineering degree,” Cannon said. “Stevens was the only school I applied to. I did one campus visit, and every time I come back I vividly remember that day, a fall day, walking onto campus with my mother. This is where she saw me. She saw me on this campus. That was her vision and her dream. I can stand here today and feel like I’ve done well in life, and it really is because of the support of my parents.”

One current scholarship student also spoke. Ryan Bertani will graduate in 2018 with a degree in civil engineering, and he already has a job lined up with a notable engineering firm. He shared his gratitude for receiving a scholarship started by the late Art Harper ’78 and his wife Linda. The son of immigrants, Bertani suddenly found himself needing to help his family after his mother lost her job, including to give the money he has earned from co-op jobs to help pay the family mortgage.

“A scholarship has never meant more to me than this year,” Bertani said. “This scholarship means that meals are covered for two months. It means I can make more trips home. It means I can focus more time on my career, become a successful civil engineer, and one day give back to another college student.”

Additionally, a young alum spoke about how scholarships helped her maximize her time at Stevens and set herself up for a meaningful career. Reeba James graduated in 2017 with a degree in finance, and she has been accepted to study social work at Columbia. She expressed gratitude for receiving multiple scholarships, including the Mark Samolewicz Memorial Scholarship and the Anita Lang Stevens Alumni Association Legacy Scholarship, and the developmental opportunities they allowed her to pursue, rather than having to work an unrelated part-time job.

“They allowed me to become fully involved with life on campus,” James said, citing her roles in the Student Government Association, Gear and Triangle, and the Stevens Christian Fellowship. “I was able to hold leadership positions in multiple clubs and focus on holding these positions well. These experiences all taught me how to communicate clearly, manage effectively, and balance multiple projects at the same time.”

President Farvardin also spoke, and he gave a heartfelt thanks to scholarship supporters, as well as encouragement to the students who receive them.

“I encourage you to cherish the opportunity that you have to receive your education from our great institution, and to be supported and counseled by such caring alumni and friends of the university.”

See pictures of the Family and Individual Scholarship Luncheon on the alumni Flickr page.